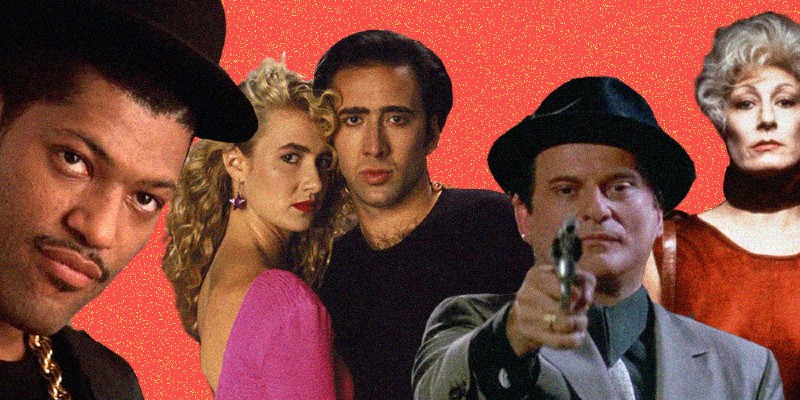 The Crime Cinema Renaissance of 1990

30 years later, looking back at an epic year in crime movies.

The Nineties were the last great decade for crime films, and no individual year was stronger than the very first: 1990.

It was a time of great transition beyond its number, with the ruthless optimism of the Reagan years crumbling in the face of trouble at home and abroad, including government scandal, recession, the impending collapse of the Soviet Union, rising anti-government sentiment and racial animosity, existential unease at the prospect of entering a new millennium and more. But while the Hollywood studios continued churning out high concept fare with broad appeal (the highest grossing films of that year were Ghost, Home Alone and Pretty Woman) there was an increased desire on the part of filmmakers to use crime stories as means of tearing down the last remnants of Morning in America in order to expose the madness and moral rot that lay behind it.

Thirty years later, the crime films of 1990 deserve their own retrospective.

Everybody Wants to Be A Gangster

The same year that The Godfather series had much of its prestige knocked out of it thanks to the one-two punch of The Freshman, which saw Marlon Brando lampoon his iconic portrayal of Don Corleone, and the bitterly disappointing The Godfather Part III, the gangster picture got an injection of new life and new cache by way of three original and electric films released days apart that September: Martin Scorsese’s middle-class mob epic Goodfellas, Abel Ferrara’s moody urban horror show The King of New York, and the Coen Brother’s Depression-era turf war saga Miller’s Crossing. 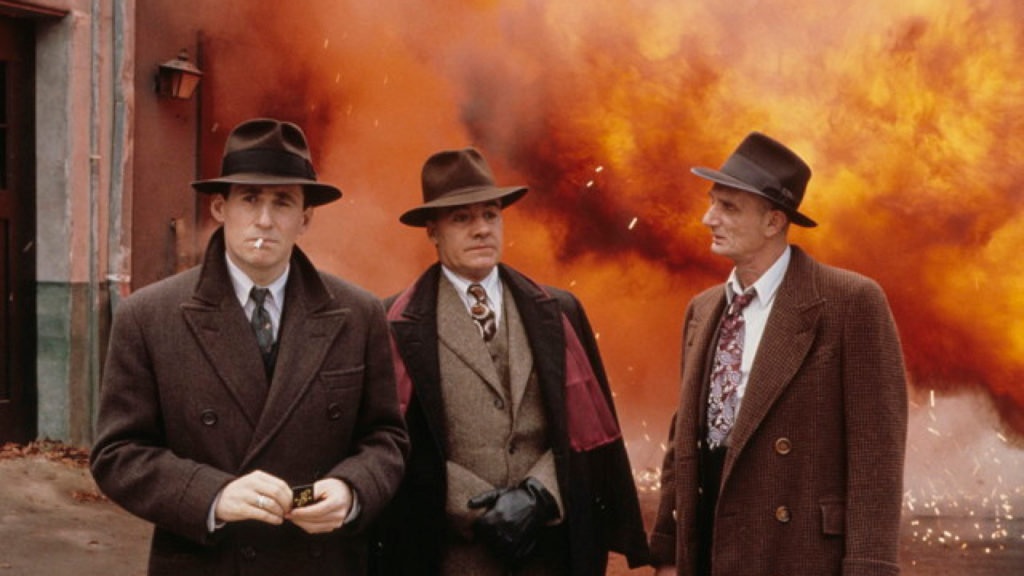 All three films reckon with the history of their genre, even as they push it forward: Goodfellas, which spans several decades and includes a fourth-wall breaking callback to the one of the earliest depictions of organized crime in cinema, created the structural and psychological template for countless mob dramas to follow, while King of New York bade farewell to the figure of the romanticized mafioso even as it introduced moviegoing audiences to the the hip-hop gangster (an archetype soon to be cemented into the popular consciousness by the following year’s New Jack City). A loving pastiche of Warner Brother’s classic ‘30’s gangster pictures and the work of hardboiled scribe Dashiell Hammett, Miller’s Crossing established a visual palette that just about every Prohibition-set period piece to follow would use, as well as setting the stage for the increasingly violent dark comedies of the next few years.

Today, all three films are held up as indisputable masterpieces, but at the time, only Goodfellas enjoyed any measure of success at the box office and during awards season. Still, given that it usually finds itself sitting atop Best Films of 1990 lists, you might be surprised to learn it turned only a modest profit, not even breaking into the top 30 grossing movies of the year. That’s still more than can be said for King of New York or Miller’s Crossing; it would be years until they got their proper due. That three such masterpieces belonging to the same genre could be released back-to-back-to-back is almost as unthinkable today as the notion that they’d more or less be met with a shrug.

In 1984, writer Barry Gifford founded Black Lizard Press with the express purpose of reintroducing readers to out of print classics of hardboiled and noir fiction. In 1990, the same year Black Lizard was purchased by Random House and merged with the publisher’s existing Vintage Crime imprint, several titles from its catalogue made their way to screen, setting off the biggest wave of neo-noir since the mid-Seventies.

That year saw the release of three Thompson films: the oedipal con artist drama The Grifters, the twisty kidnapping caper After Dark, My Sweet, and the ultra-grim small-town murder mystery The Kill-Off.

If any single writer is synonymous with Black Lizard, it’s the “dime store Dostoevsky” of American pulp, Jim Thompson. Along with two critically acclaimed French adaptations from the previous decade (1979’s Série Noire and 1981’s Coup De Torchon), Black Lizard’s reissuing of several of his novels was responsible for pulling Thompson out of obscurity. Filmmakers were quick to discover parallels between his brutal, downright nihilistic depictions of post-war America and the modern day, with 1990 proving the most fecund period when it came adaptations of his work. That year saw the release of three Thompson films: the oedipal con artist drama The Grifters, the twisty kidnapping caper After Dark, My Sweet, and the ultra-grim small-town murder mystery The Kill-Off.

As with that year’s gangster tryptic, only one of these films found any success. Like Goodfellas, the stylish and star-studded The Grifters (on which Martin Scorsese served as a producer) turned a modest profit and nabbed a number of big international award wins and Oscar nominations. Despite good reviews, James Foley’s adaptation of After Dark, My Sweet came and went with little notice, while Maggie Greenwald’s The Kill-Off, a darling of the previous year’s festival circuit, played only a couple of theaters before all but disappearing. 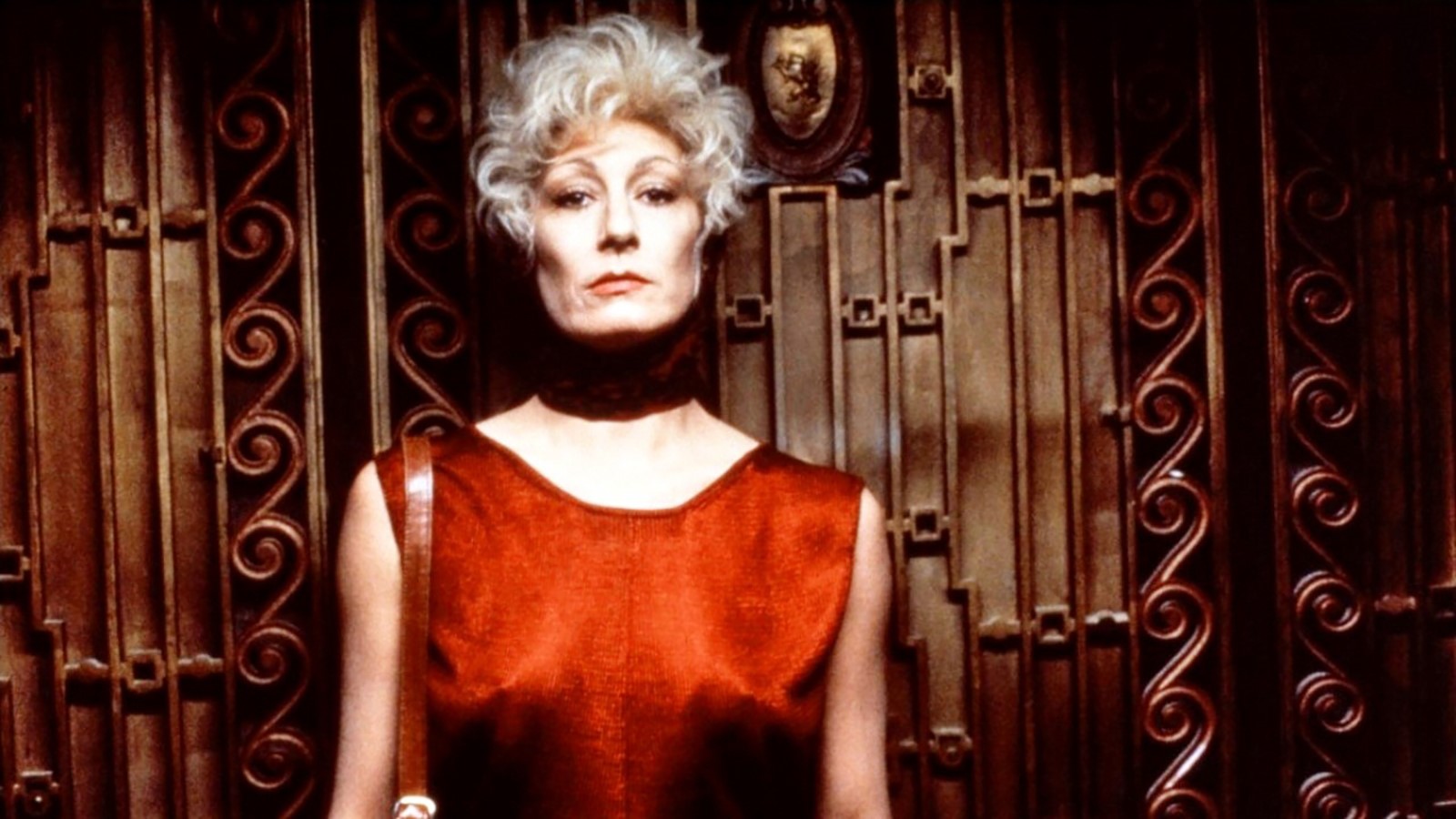 Ask Thompson fans what they consider the best American adaptation of his work and you’ll find opinion split between The Grifters and After Dark, My Sweet. But while both films are exceedingly faithful to their source material and captivating in their own right, its actually Greenwald’s film—free of any Hollywood sheen and emanating a seedy, Lynchian surrealism (the film plays at times like a scummier Twin Peaks, which debuted the same year)—that best captures the queasy, oppressive air of doom that comes from reading him.

Thompson wasn’t the only Black Lizard writer having a moment: one of the first titles put out by the newly merged Black Lizard/Vintage Crime was Charles William’s 1952 noir novel The Hot Spot (originally titled Hell Hath No Fury) as part of a media-tie in with the Dennis Hopper-directed, Don Johnson-starring movie of that same year. Williams is best remembered for his nautical-themed Bluewater Noir books, but anyone who watches Hopper’s moody, sexually-charged adaptation—about a bank robber posing as a used car salesman in a dusty Texas town who finds himself torn between two women—could be forgiven for thinking it came from Thompson’s brain, what with its amoral anti-hero, doom-laden love story and sweaty, sunburnt air of menace.

As with the three Thompson adaptations, The Hot Spot feels like it exists in the 1950s and 1980s simultaneously. All of the original novels were written in the ‘50s and ‘60s, while the films versions are set in the modern day, although the period change is not immediately apparent. This plays as very much intentional: like Back to Future, they all draw a direct link between the conformity of the 1950s and the glassy-eyed nostalgia of the 1980s in order to expose the vein of perversity running along both.

Lovers on the Run

While mainstream audiences may not have been hip to the noirish mood of 1990, arthouse patrons certainly were, as evidenced by that year’s Palm D’or winner: David Lynch’s Wild at Heart. Lynch co-wrote the script alongside none other than Barry Gifford (adapting his own novel published the previous year). The film, about a pair of young lovers driving cross-country through a mystic and terrifying version of America, had its award-winning world premiere in the middle of Twin Peaks’ sensational first season run, making 1990 very much the year of Lynch.

While Wild at Heart didn’t come anywhere close to replicating the success of Twin Peaks (its small budget ensured it turned a small profit, while reviews were mixed), it did kick off a series of lovers-on-the-run movies in the years that followed, including The Living End, Thelma and Louise (not technically lovers, but still), True Romance, Natural Born Killers, The Doom Generation, Love and a .45 and Perdita Durango (another Gifford adaptation set in the same universe as Wild at Heart).

Wild at Heart remains somewhat underrated today, but taken together with Lynch and Gifford’s other contributions in the years surrounding its release, it may be the crime film that best captures the tenor of its time. 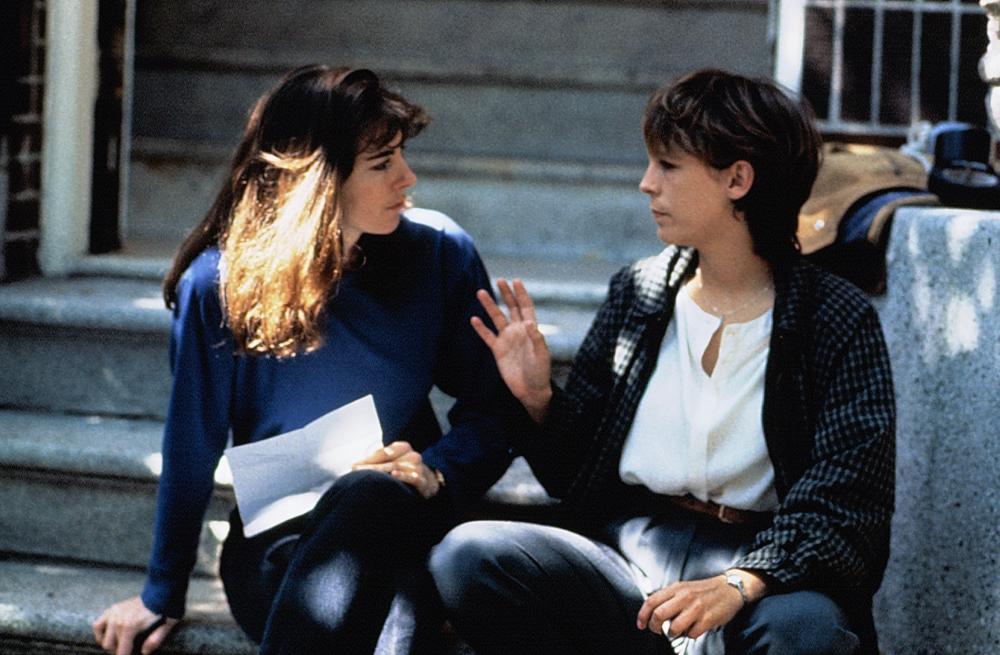 Much of the same can be said of Blue Steel, which, while being a much better film than Catchfire on the whole, makes for an equally strange and disorienting experience. Directed by Katherine Bigelow, the film stars Jamie Lee Curtis a rookie cop who kills an armed robber on her first day on the job only to have her service weapon stolen by an insane stockbroker (Ron Silver, playing a proto-Patrick Bateman), who then simultaneously seduces and terrorizes her. The film starts off as a tight neo-noir, moves into erotic thriller territory, takes a sharp plunge into full-blown horror, before wrapping up with an action-packed set-piece. Bigelow would go on to establish herself as one of the industry’s top directors, scoring bigger hits and history-making accolades along the way, but I would argue that Blue Steel remains her best work.

One year before the Rodney King scandal set into motion events that would lead to the Los Angeles riots of 1992, there was a tangible distrust of law enforcement lingering, and it could be felt in the movies at the time, including the above-mentioned thrillers Blue Steel, Internal Affairs and Presumed Innocent. It was even more apparent in exploitation films, including King of New York, which presents street cops as just as corrupt and vicious as the “bad guys” they target (leading to one of the all-time great moments of cathartic movie violence), and the slyly satirical horror-crime mashup Maniac Cop 2. Resting somewhere between those examples is Miami Blues, George Armitage’s brilliant adaptation of Charles Willeford’s 1984 novel of the same name. 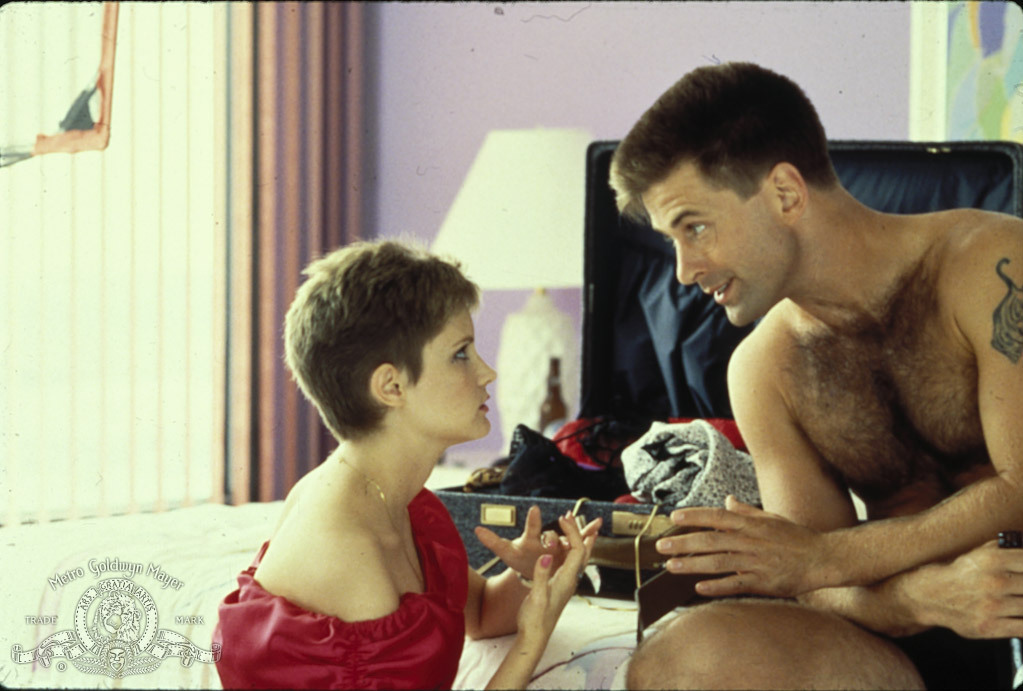 Willeford was one of the midcentury hardboiled writers reintroduced to audience thanks to Black Lizard, although he’s best known for his popular Hoke Mosely detective series, of which Blues is the first entry, written between 1984 and 1988. The adaptation of Blues sees a young Alec Baldwin star as a mentally unbalanced ex-con who steals a cop’s badge and gun in order to pose as law enforcement while he embarks on a robbery spree. Along the way, he begins solving and stopping other crimes, proving himself better at the job than the real police.

Miami Blues’ sneering contempt towards authority, combined with its gleeful mix of gruesome violence and slapstick comedy helped prepare audiences for Quentin Tarantino’s culture-shifting work of the next couple of years (Tarantino has cited Willeford’s work as an influence on Pulp Fiction), making it one of the most essential films of its year.

While the past twenty years have given many a good-to-great crime films, they have been fewer and farther between. There’s any number of reasons for this—the death of the mid-budget movie for adults as a result of the continued corporate homogenization of media, for example—and it’s not as though people are longer interested in the genre. In fact, even as they’ve disappeared from theaters, these stories have thrived on television.

Still, audiences didn’t know how good they had it at the time. Now, when we look back on the films of 1990 and combine them with those that came out over the course of the following nine years—a list that includes The Silence of the Lambs, Reservoir Dogs, Pulp Fiction, Romeo Is Bleeding, Red Rock West, The Last Seduction, Grosse Point Blank, Deep Cover, Bad Lieutenant, Menace 2 Society, The Usual Suspects, Dead Presidents, Clockers, Carlito’s Way, One False Move, Devil in a Blue Dress, Falling Down, Seven, Casino, Heat, Fargo, Get Shorty, Lost Highway, L.A. Confidential, Jackie Brown, Out of Sight, The Woman Chaser and more—it can’t be denied that it was truly the last great decade for crime at the movies. 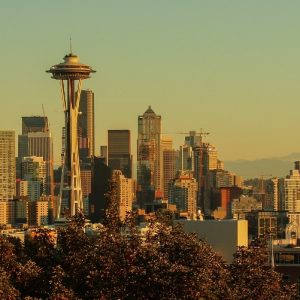 Seattle may currently enjoy an enviable reputation as a laid-back, peaceful, and determinedly nice-to-your-neighbor sort...
© LitHub
Back to top