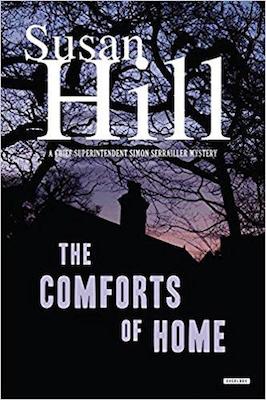 The following is an exclusive excerpt from The Comforts of Home, by British master of the psychological thriller Susan Hill. In the following passage, her series protagonist, Simon Serailler, recovers at a seaside retreat after losing an arm, and contemplates his return to the force.

Good morning, Simon. Hope all is well on Taransay. Rest up. You need it. But I hope the cop in you is still raring to go when you have caught your breath. We’ll find something to ease you back in.

Hi Si, still in Newkybroon land. Back Monday and don’t ask then what. Gotta make plans, gotta make up mind. Need to talk. When ru home? Last match on Sat. Suppose that’s it for you now, cricket-wise. Tough. Mum sounds chirpy. Flixer ditto. Would you even know I had a sister?

Hi dearest bro, how is it? Stunning here, 26 degrees today, wall-to-wall sunshine and Felix complaining about having to wear his blazer. Kieron still doing the school run but something has to give surely? How’s the arm? Any news on the permanent one? I know you won’t want me to mention him, but you’re going to have to put up with it – have you heard from Dad? I am pretty sure the answer will be no, and he usually wings me something curt every few weeks and he hasn’t since mid-July. Judith is coming down to stay for a few days next week and it will be great to see her but the subject of Dad will be the elephant in the room, as usual, and it isn’t easy.

Hannah’s school are doing Guys and Dolls—she sends excited messages, desperate for a good part. Warning:—we’ll all have to go.

Sam due back but not holding breath. He’s pretty unsettled. But he seems relaxed about K. They get on fine. God knows what he’s planning for this year. His A levels were fine but he seems to be having a rethink career-wise. To what, I have no idea. We can’t have that conversation at the mo. He’s even mentioned med school once or twice. Until now, it’s been police—and, even more, armed police—all the way. And he’s never been passionate about medicine, and you have to be.

I used to hope one of the three would carry on the family medical tradition but I wouldn’t wish it on anyone now, unless it was their only and complete obsession and then for some rare speciality. Neurologist fine. Facial reconstruction of war victims, fine. Paediatric oncologist, fine. General practice—not so much.

Loads of love. And Phone Home.

He was sitting on the end of the quay in the sun—sun which was forecast to disappear that evening, giving way to rain, gales and high seas. It was not always easy to tell how long these might last, but the chances were that when they had eased, the late-summer sun would not return, certainly not with the warmth it still held today. The boat was due in soon, carrying supplies and mail, and he wanted to help unload. He could carry reasonably large boxes and crates but not the heaviest. Not with the arm. Not as he had once done so easily. He had never prided himself on any particular muscular strength, though he had always been a sportsman, and fit. After the physiotherapy he had been subjected to in rehab he was probably fitter than ever but he had been warned not to over-test the prosthetic by lifting and carrying anything too heavy. Later, when he had the new and permanent arm. Later. He had grown used to hearing that. Later. But the physios had been the most positive of people. No. Never. Can’t. Those words had not been in their vocabulary.

He slipped his iPhone away. There had been nothing in the emails to alarm him. Sam would get there—wherever his ‘there’ might be. His sister seemed bird-happy. He had never had any real concerns about her marriage to the Chief from a personal point of view. Because he was still on rehab leave, he had not yet encountered any professional conflict over having his boss as a brother-in-law. Perhaps he never would—not only because they would both go out of their way to accommodate one another, but because he still had doubts about returning to work. How much of a cop could he be? He had been assured the arm would make ‘absolutely no difference to anyone or any aspect of the job’. Really?

He let Cat’s mention of their father slide past him. Since Richard Serrailler had been accused of rape, and managed to find a defence counsel clever enough to get the CPS to drop the case, Simon had wiped all thought of him from his mind. Their relationship had always been difficult, but that aside, he had no doubt whatsoever that the CPS had made a mistake.

He glanced out to sea and saw the ferry just turning into the harbour. A few people were gathering down there, more would appear. The pub and shop would start stocking up now on extra supplies for the coming winter, using all the storage they had, part of which emptied in the summer season, when the boats came in more frequently. Simon jumped up.

The islanders knew all about his accident, and the loss of his left arm, and there had been many a quiet word or the offer of a drink, but otherwise no great fuss had been made, for which he was grateful.

The islanders knew all about his accident, and the loss of his left arm, and there had been many a quiet word or the offer of a drink, but otherwise no great fuss had been made, for which he was grateful. Now, he waited as the boat docked carefully, the hawser was thrown from on board and within minutes the first cartons and crates were being unloaded. Simon and two others started to lift smaller cartons of groceries onto sack trucks and wheel them to the store behind the shop.

‘Candles.’ The speaker was the woman he had seen walking along the shore on the other side of the island. She was tall, and her blonde hair was tied in a knot at the back of her head. ‘You came yesterday?’ she said.

‘Evening before.’ He was finding it difficult to grip the sack truck and manoeuvre it up the slope, so did not want to waste his breath on talk, but she seemed to grasp the fact at once. She did not offer him help, just got out of his way, heaving her own truck to the top.

The unloading, fetching, carrying and storing went on for an hour. The boat was fully laden, and without passengers other than the two-man crew.

Simon stopped to get his breath. He had done a lot of exercise since his accident, but his core strength was still not back to normal and his shoulder ached badly.

The woman was hauling crates off the sack truck into the back of the store, making light of each one. He felt annoyed with himself. He shouldn’t be tiring before a woman. That was something that once would never have crossed his mind. Now he was resentful. His pride was hurt.

‘That’s it,’ someone shouted. ‘Last to the bar’s buying.’

There was a good-humoured rush across to the Taransay Inn.

‘Have you met Sandy?’ Douglas appeared out of the crush. ‘She arrived here not long after your last visit and she’s a fixture.’

The woman raised her glass of beer. She was perhaps in her late forties, possibly a bit younger – the wind and weather soon gave those who stayed a winter or two a rough and reddened complexion that added to their years.

Simon had a large glass of malt to help numb the pain in his shoulder. He had heavy-duty meds prescribed but preferred the whisky.

‘How long are you here?’

‘Nor had I. I came for a week, a week stretched to a month and that was four years ago, near enough.’

Her accent was not Scottish but she had acquired a slight Taransay intonation, which was a lilt unlike any other Simon had encountered.

‘How do you find the winters?’

Sandy shrugged. ‘It’s the wind can drive you mad. But I like it fine. You hunker down.’

The bar was full and others coming in had damp shoulders and hair. Rain was streaming down the windows.

‘And you?’ Sandy asked, though she did not look at him. ‘You had an accident.’

‘Let me buy you another.’ Simon got up. ‘Bitter shandy? A chaser?’

‘No, no, I don’t drink the hard stuff much. Only to keep out the cold sometimes. But thanks.’

Kirsty had come in and was saying something to Douglas at the bar. ‘What can I get you? Douglas?’

‘No, I’m away to fetch Robbie, I’m running late and school’s out at dinnertime today.’

‘Thanks. Just the single and then I have to be away with a roll of fencing to the other side.’

When the two whiskies were pushed over the bar, Douglas topped his up from the jug on the counter. Serrailler made a face. ‘Bloody sacrilege,’ he said. ‘A good malt and you ruin it with your lemonade. I can never get my head round it.’

Douglas laughed. ‘Any news?’ He had nodded towards Simon’s left arm.

‘You going back to work before you get what Robbie calls the bionic arm fitted up?’

‘You going back to work before you get what Robbie calls the bionic arm fitted up?’

‘Can you not ease in gradually?’

‘What else is there?’

Simon finished his whisky and did not reply. It was a question he had asked himself many times, without being able to give himself a reply.

Douglas straightened up. ‘Thanks,’ he said. ‘Looks as if Sandy’s kept your seat warm over there.’

‘Who is she? Other than a settler. Where did she come from?’

Douglas raised an eyebrow. ‘Bit old for you.’

‘Get out, I don’t mean that and you know it. Just wondered. A newcomer who comes to Taransay and stays . . .’

‘Aye, well . . . she’s made herself useful from the start. Come to think of it, I could do with a hand with the fencing . . . get it finished in half the time. She turns her hand to most things. Helps out here when it gets busy in summer. Iain says she must have run a bar herself in another life. But it’s the fencing for now.’ He edged through the crowded bar to where Sandy was sitting.

It was only when he was walking over to the shop to pick up some supplies that Simon thought Douglas could perfectly well have asked him to help out with the fencing. But he hadn’t and it made him prickle with resentment.

From THE COMFORTS OF HOME. Used with the permission of the publisher, OVERLOOK PRESS. Copyright © 2018 by SUSAN HILL. 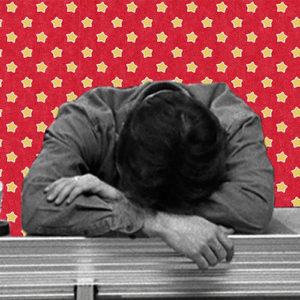 The Cranky Bookseller's Guide To Holiday Shopping Booksellers are well aware that as the year winds down, their busy season is just beginning. From the end of Thanksgiving—really,...
© LitHub
Back to top