Crime and the City visits Mongolia, a country rich in minerals and caught in a struggle between world superpowers.

Mongolia—six times the landmass of the UK, but with just over three million people. Sparsely populated and often with an unforgiving climate—blazing hot summers and severe winters, known as Zuds, that commonly kill livestock and ruin herder families. The country’s capital Ulan Baatar (UB) is home to 1.3 million Mongolians, almost half the entire national population. It’s a city that seen big changes since the country crash-dived into capitalism and democracy following the collapse of its sponsor state, the USSR. Now Mongolia, large in land but small in population, lies ‘between the bear and the dragon with the eagle overhead’—sandwiched between the competing attentions of Russia to the north and China to the south with America as an ally and influencer. Why does Mongolia have such importance? Mongolian dirt—all that land is rich in coal, copper, gold, iron ore, lead, molybdenum, oil, phosphates, tin, uranium, and wolfram. Balancing environment, independence and improving ordinary people’s lives with fighting corruption, crime and outside influences has been a tough job in Mongolia. Surely the inspiration for some crime writing?

Certainly there was a time, back in the first half of the twentieth century when Mongolia popped up in pulp crime fiction all the time. Most of this though was a sort of sub-set of the then popular ‘Yellow Peril’ genre. In the 1920s and 1930s Herbert Asbury made a name for himself writing true (or truish) crime book including The Gangs of New York: An Informal History of the Underworld (1928) that inspired Scorsese’s movie of the same name. Slightly earlier his first novel, The Devil of Pei-Ling (1927) had been a Yellow Peril shocker about Mongolian devil-worshippers brought back to life by in a temple deep in the Gobi Desert to commit murder and mayhem. Many of these pulp efforts featured the olgoi-khorkhoi, or mythical Mongolian death worm, that appeared in the papers as frequently as the Loch Ness Monster or Big Foot in the 1920s.

Certainly, several writers who would later find fame in other ways ventured into Mongolian-set pulp tales. L Ron Hubbard, who had visited northern China a couple times as a young man in the late 1920s, though later would rather embellish his visits to include hanging out with Mongolian bandits and Siberian shamans. In the 1930s Hubbard made a pretty good living writing from the pulp magazines. A half dozen or so of his stories were set in Northern China and Mongolia. For instance, In The Trail of the Red Diamonds (c.1934) an American adventurer takes on the Chinese Army, British spies and Mongolian bandits to get his hands on a cache of rare diamonds hidden in the lost tomb of Kublai Khan. Hubbard of course later moved on from writing for the pulps into science-fiction and other money-making ventures!

And a quick nod to the novelist JP Marquand who alternated his career between literary novels of Bostonian manners and pulp thrillers for the Saturday Evening Post. Marquand also spent time in China and Asia and came up with the Mr Moto concept that ended up being half a dozen serialised novels and countless bad movies. But before Moto Marquand penned a short-and-sweet, and now largely forgotten novel, titled Ming Yellow (1935). It’s meagre fare and not overly original—a brave American, his love interest, Mongolian bandits (and Marquand had actually been to Chinese Inner Mongolia), and duplicitous rare ceramic collectors. There are some charming descriptions of old Peking’s hutong alleyways and the dusty roads out of China to Mongolia, but not much else to make it worth digging out.

And then Mongolia gets rather forgotten—a Soviet satellite state, rarely visited, its rare earths and mineral deposits off-limits. That is until the fall of communism and Mongolia’s reawakening, democratisation and massive growth in importance as its commodities became crucial to China’s export machine and the world’s mining companies. And now it’s the twenty first century….

Step forward Inspector Nergui of the Mongolian Serious Crime squad—a character that has been compared to Martin Cruz Smith’s post-Soviet era detective, Arkady Renko. Nergui is a man of this new post-Soviet, commodities rush, betwixt the Bear and the Dragon Mongolia. A creation of Alex (sometimes billed as Michael) Walters the Nergui trilogy is set in a Mongolia where the citizens fight to find a place to live in a post-global world. In The Shadow Walker (2017) it’s snowing in Ulan Baatar as the mutilated body of a British geologist is found in the city’s most expensive hotel. The city’s top cop Chief Dorlpalam assigns Nergui the case while Inspector Drew McLeish arrives from England. From the back streets of a freezing Ulan Baatar littered with disused Soviet-era factories and political tensions, the case leads the two men out into the vast Gobi Desert and the race to own and exploit Mongolia’s vast mineral and energy reserves.

In The Adversary (2018) Nergui and Doripalam return. Having arrested Muunokhoi, the once untouchable head of Mongolia’s largest and most powerful criminal empire, they face political corruption that stretches from the Ulan Baatar Muunokhoi once controlled to the mountain ranges of the far north of the country. Finally, in The Outcast (2018) Ulan Baatar is now sweltering in the humid summer heat and preparing to celebrate the anniversary of Mongolia’s national hero Genghis Khan’s rise to power. A series of dead bodies and then the police shooting of a suicide bomber in central Ulan Baatar’s massive Suukbataar Square take Nergui, and Doripalam now head on Internal Security, across the vast country chasing the killers.

And a few more novels set in Mongolia…..

And finally, a history book that is about one of the worst killers to arrive in Mongolia, Baron Ungern von Sternberg. James Palmer’s The Bloody White Baron (2008) is the gruesome and violent story of this Baltic aristocrat posted to the wilds of Siberia and Mongolia just before the First World War. After the Bolshevik Revolution, the Baron became dedicated to murdering communists. Now in command of of his own private army he led a conquest of Mongolia and then based himself in the country. The parallels between Ungern von Sternberg and Conrad’s Kurtz are unmissable—responsible for slaughtering everyone he suspected of irreligion or of being a Jew, slipping into drugs, debauchery, and superstition.

All through modern history Mongolia has too often been a violent playground for the battles and corruption of others—Russia, China, Cold Warriors, scheming corporations. The last century of crime and thriller writing on the country reflects these historical shifts and waves of influence. The next phase perhaps might be for Mongolians themselves to tell their country’s story and for those stories to be translated for all of us to read. 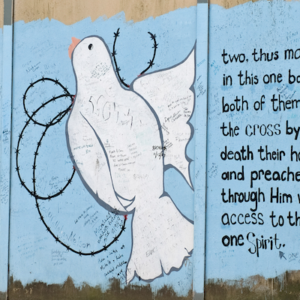 “The riot had taken on a beauty of its own now. Arcs of gasoline fire under the crescent moon. Crimson tracer in mystical...
© LitHub
Back to top