Hint: It's all the rain, gloom, secrecy, and serial killers.

I’m standing on a concrete slab in the middle of a deserted park. This is no ordinary slab, though. It’s about fifty feet long, twenty feet wide, and twenty feet high. It’s also covered in moss. Fifty years ago, dirt was piled around the whole thing to try and make it look like a hill, yet even now this mound sports only a few leafless trees despite the lush forest all around.

There is a lone wooden picnic table in the exact center, black with mold.

If I allow history—and a little imagination—to paint the rest of the picture, then it’s safe to assume that directly below my feet there used to be live missiles aimed at Russia.

That’s right. A missile base once occupied this land. And less than a mile away there’s the remnants of a 19th century mining town, some open (gated) mine shafts, and a seemingly unlimited number of dark trails leading off into dense forest hiding who-knows-what.

All this just minutes from affluent Bellevue, just east of Seattle.

The place is called Anti-Aircraft Peak, part of the Cougar Mountain Wildland Park, and I’m standing here above this old missile silo thinking: I can use this in a novel.

It’s a thought I often have since I moved here.

I landed in the Seattle area in 2013, and for a while my impression of the area was shaped entirely by its beauty. Lush green foliage everywhere. Snow covered peaks surrounding a vibrant city, all painted by sunsets to die for. Contrast this with my previous home, where I’d spent most of my life: San Diego, California. Beautiful in its own right, but also quite barren. It’s basically a desert with nice beaches, and what few trees there are are usually brown and stunted.

It took a winter—several, actually—to start to see the Pacific Northwest in a different way. Gloom, it turns out, is really the prevailing weather feature here. Grey skies, a constant light rain for months on end, and 4:30pm twilight in the dead of winter. Sometimes the fog is so thick I can barely see twenty feet.

And with all that damp comes decay. Mold and moss. Worn out pavement. Stagnant puddles. All that water has to go somewhere. Stagnant bogs just off the side of the road are a common site if you look for them. Dead trees in still, dark water, like nature’s cemetery.

[W]ith all that damp comes decay. Mold and moss. Worn out pavement. Stagnant puddles. All that water has to go somewhere.

The water and cold seeps into everything, and I’m not just talking about a physical phenomenon. People here often talk about the ‘Seattle Freeze’, a defining characteristic of the culture by which it’s nearly impossible to make friends if you’re new. Everyone’s always busy. On their way to something else, no time to talk, sorry. Everyone seems to have their small social circle from which they rarely stray. Personally, I think it should be called the ‘Seattle Gloom’.

Driving outside the city I quickly discovered another feature that I’d never encountered as a San Diegan. Trees lining every road. No, not just lining. Walling me in. Impenetrable dark forest that makes you feel like you’re at the bottom of a steep canyon. Yes, the treetops are a lovely green, but down at street level it’s almost totally dark. The ground is cloaked in this murky shade, and just to double-down on the impenetrability there are the thorny blackberry brambles that just go on and on, like a natural barbed wire fence. It all basically says, “don’t come in here.” Or maybe, “good luck getting out again.” I often feel that if I walked ten feet from any roadside here and fell over, I’d probably never be found.

When I drive even farther from civilization, really out in the sticks, there’s another feature that I’ve become a bit fascinated with: unpaved roads leading off into the woods, blocked by excessive gates covered in ‘no trespassing’ signs.

These private roads are way more common than I would have ever imagined. And every single time I see one I try to imagine who in their right mind would have gone down such a foreboding unmarked road if not for the gate and the signage. Clearly there was an epidemic of trespassing going on here at some point which required such incredible effort to stop. Maybe it’s just me, but whenever I see these signs I can’t help but think “what are they hiding?” Or, when I’m wearing my novelist hat, “what could they be hiding?”

It all adds up to an idyllic place to set a crime story. You can go urban, making use of the rain-slick downtown, with its dynamic blends of wealth and poverty, new and old, clean and grimy. A twenty-minute drive gets you into the deep dark woods, ghost towns, and a whole slew of other hidden things. Add to that the moody weather, a literal wet-blanket thrown over the whole area, and it’s only natural I think to want to tell a story that fits the place so well. Gloom and secrecy.

There may be another reason—a more practical one—also at play here. Not so much for novelists, perhaps, but certainly for screenwriters. A few hours north, across the Canadian border, is Vancouver. From a film perspective it’s a dead ringer for Seattle, and its surroundings are virtually identical. There’s a vibrant filmmaking community there, and loads of financial incentives for production studios to make full use of it. So as a writer, if you set your story in the Pacific Northwest you’ve already ticked a major box on the ‘don’t give the producers any reason to say no’ checklist.

In reality the region has a crime rate that is above average, but not nearly as high as some more ‘mundane’ places. Houston, for example, is much higher than Seattle on that chart. Despite that fact I am reasonably confident—though I haven’t run the numbers—in saying that fictional crimes taking place in or near Seattle far outnumber Houston’s tally. Which, now that I think about it, is probably the real answer to the question this article asks. In fiction your setting is really another character, and the more rich and interesting that character is, the better. Seattle is your dark and brooding mystery figure standing in the shadow, promising no-good. Houston is… well, largely unremarkable. As cities go it’s quiet and keeps to itself.

Of course that’s what they often say about serial killers… 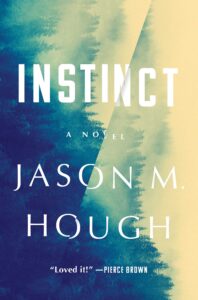 Jason M. Hough is the New York Times bestselling author of The Dire Earth Cycle and the near-future spy thriller Zero World, and is a proud member of SFWA (Science Fiction and Fantasy Writers of America) and ITW (International Thriller Writers). When not writing, reading, or playing with his kids, he spends his time exploring virtual reality or trying to coax his 3D printer into doing something useful. He lives near Seattle, Washington with his wife, two sons, and a dog named Missbuster. His new novel, Instinct, is now available. 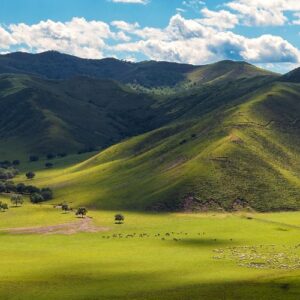 Mongolia—six times the landmass of the UK, but with just over three million people. Sparsely populated and often with an unforgiving...
© LitHub
Back to top