The Crime Fiction of Rangoon / Yangon

A tradition of noir in a turbulent, evolving city.

It was a British colonial police officer in 1920s Burma, Eric Blair, who gave us the most widely read description of crime and punishment in the country that was then part of the larger British Raj. Later, when he had adopted the penname George Orwell, that former colonial officer wrote an essay A Hanging (1931); the story of the execution of a nameless Burmese man.

“It was in Burma, a sodden morning of the rains. A sickly light, like yellow tinfoil, was slanting over the high walls into the jail yard.”

The Englishman is on duty that morning.

“One prisoner had been brought out of his cell. He was a Hindu, a puny wisp of a man, with a shaven head and vague liquid eyes.”

The man is to be hung that morning; he is aware of his fate; the nameless narrator will be one of the officials overseeing the hanging. It is a final walk of just forty yards to the gallows; the man’s arms are bound; the ground is muddy from the previous night’s rain. The narrator observes that:

“once, in spite of the men who gripped him by each shoulder, he stepped slightly aside to avoid a puddle on the path.”

A condemned man sidestepping a puddle dramatically and suddenly brings home the awfulness of the death penalty; the violence of imperialism; and the dreadful finality of death. Orwell’s other Burma memoirs, Burmese Days (1934) and the essay Shooting an Elephant (1936), feature similar instances that reflect Orwell’s role as an enforcer of British imperialism and his growing anti-colonial consciousness.

Anyone interested in these times might also want to look up The Brothel Boy & Other Parables of the Law (1992) by the American criminologist Norval Morris. This curious book is a fictional reconstruction of the experiences of Orwell as a Burmese policeman and magistrate, which Morris uses to examine wider ethical and legal issues. Morris, who was educated in Australia and was then chairman of the Commission of Inquiry on Capital Punishment in Sri Lanka shortly after it gained independence from Britain, was fascinated by Orwell’s experiences in colonial Burma.

Since Orwell’s time Burma has been through massive convulsions, all too often violent. Rangoon suffered riots in the 1930s against colonialism; there was the brutality of the Japanese occupation in World War Two; the assassination of Aung San (father of Aung San Suu Kyi) and several other prominent Burmese politicians in 1947 on the eve of independence; the military coup in 1962 that led to the junta that lasted until 2011 and, while Burma has managed to establish a democracy, civil war and ethnic tensions have remained.

Those novels that take Rangoon as a location span the period from the colonial era to the modern day. Retribution Road (2017) is by French author Antonin Varenne. It starts in Rangoon in 1852 during the Second Anglo-Burmese War as Sergeant Arthur Bowman, an officer in the East India Company, is sent on a secret mission that ends in abject failure. Disgraced, Bowman ends up a drunk and an opium addict. The book moves from Burma to Victorian London and America’s Wild West. The novel is the first in a planned trilogy featuring Bowman.

Dinah Jeffries likes an Asian location—in her previous novels (which often involve mysteries with a large dose of romance) she’s visited 1950s Malaysia, colonial Ceylon (Sri Lanka), British India in the 1930s, and French Indochina. Her latest book, The Missing Sister (2019) features Belle Hatton, a nightclub singer in 1930s Rangoon. But Belle is haunted by the mystery that she may have a sister she has never met in the city. As an aside it might be interesting to note that while Rangoon was certainly never a competitor to Shanghai or Singapore for nightclub capital of pre-war Asia, it did have its moments as the 1934 pre-code Michael Cutiz movie Mandalay (which ranges across 1930s Burma) wonderfully shows with Kay Francis as the world-weary brothel-nightclub singer Spot White.

Lucy Cruickshanks moves us into the 1980s and the military junta-run country in The Road to Rangoon (2015). Like Dinah Jeffries, Cruickshanks also likes to move around exotic Asian locales—her debut novel The Traders of Saigon (2013) was set in 1980s Vietnam. This time it’s an apparent kidnapping with the British ambassador to Burma’s son having gone missing. It’s a period of civil war, divided loyalties and gem smugglers.

Christopher G. Moore is known across Asia for his Vincent Calvino Private Eye series set mostly in Bangkok (see Crime and the City Bangkok). There are sixteen books in the series now and in this Crime and the City we’re interested in book 13, Missing in Rangoon (2012). The junta is gone and democracy freshly restored. Now foreign businessmen are arriving on every plane as the new Myanmar gold rush gets underway. Calvino comes to town looking for a missing person, while the Thai police have been ordered to cut off the supply of methamphetamine from Burma sold in Bangkok. It’s a new country with new rules, but some old school villains.

It’s perhaps worth dusting off some older thrillers in Rangoon too. Pot Boilers and Penny Dreadfuls maybe, but popular in their day….

I’m afraid this is one of those Crime and the City columns that is desperately short of local writers. It’s not even a city (think previous Crime and the City columns such as Bangkok or Phnom Penh) where locally-based expat writers cluster. Rather the crime writing about Rangoon/Yangon and Burma/Myanmar has been almost entirely by outsiders. At least Orwell was stationed in Burma for five years—a longer sojourn than any of the other authors mentioned here. There is a small local genre of detective novels that remains sadly untranslated. And it’s also the case that many western writers have been translated into Burmese and that the level of English comprehension remains high—so crime novels are being read in Rangoon.

Sherlock Holmes first appeared in Burma in the early 1900s. The collected Holmes and Watson stories still appear today in new English language reprints while Burma’s most prolific translator of western literature (and decade-long political prisoner of the military junta), Mya Than Tint, translated all the Holmes stories into Burmese. In the 1930s, Burmese author Shwe U Daung adapted most of Conan Doyle’s stories for a local audience with his detective U San Sher— patriotic, anti-colonial and refusing to work with British policemen to catch Burmese Robin Hoods. In one memorable scene Detective U San Sher prevents a British colonial policeman, the same job Orwell had at the time, from shooting a Burmese outlaw:

“According to what I’ve heard about this outlaw, he does not torture people! He does what he does for them! He’s only an outlaw because he is dissatisfied with the government—it’s they who turned him into an outlaw in the first place. I’m not a servant of the British government but a servant of the Burmese people.” 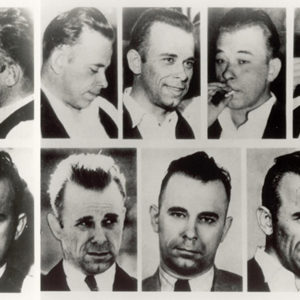 Crown Hill Cemetery is usually a peaceful place. Its lush, landscaped 560 acres overlook downtown Indianapolis. It is the final...
© LitHub
Back to top