When most of us think of Tel Aviv we either see the sun-kissed Mediterranean lapping the shores of a cosmopolitan city full of tanned high-tech entrepreneurs sampling delicious hummus in trendified old Jaffa cafés, or we see a nerve-strained town under constant threat of terrorist attack perched on the edge of a pretty unfriendly region. The subject of Israel has started more than one bar fight—it’s a polarizing place. What I don’t think comes to many people’s minds when they consider Tel Aviv is a city of dreary anonymous suburbs and dull, mundane lives lived without much hope or excitement. Yet that’s pretty much the Tel Aviv of Israel’s best known crime writer, Dror “D.A.” Mishani.

Mishani is an Israeli literary scholar turned crime writer. He began his series of novels featuring police inspector Avraham Avraham in Hebrew in 2011. He’s since been translated into many languages, including English. There are now three Avraham books in English: The Missing File (2014), A Possibility of Violence (2014), and The Man Who Wanted to Know (2017).

Avraham is perhaps not the best tourism advert for Tel Aviv. His beat is Holon, one of the least interesting parts of the TA coastal strip composed largely of a sprawling industrial estate and nondescript apartment blocks. There’s not much to recommend it—it’s boring even by the standards of seriously dreary suburbs the world over. It has to be said that Avraham himself is pretty dreary too: not much of a life (there’s a girlfriend, but they don’t see each other much though rub along pretty well), no hobbies worth mentioning, and he has none of the usual hard-boiled detective ailments (alcoholism, collapsing relationships, past ghosts haunting him, fisticuffs with the bosses). The truth is Avraham Avraham is not really a very good detective—he constantly misses things, muses on his cases while endlessly getting nowhere, overlooks the blindingly obvious. When we meet Avraham in The Man Who Wanted to Know he is spending his evenings watching the slow burn Scandi-Noir TV show The Bridge. But he gives up on TV detective Saga Noren as she always has all the answers while he has none. Avraham is the slow burning cop story’s slow burner!

But with Mishani as our omniscient guide, letting us telescope down onto Avraham as he proceeds at his own, sometimes infuriating (to us and to his superiors) slow pace we are unravelling the case ahead of him, which is intriguing, makes us feel smart and is a very hard trick for an author to pull off without the case being either too simple and obvious, or too bizarre and ridiculous. That Mishani has done it three times in the Avraham novels so far, and scored three out of three hits (you know what he’s doing but he still lures you in) is a testament to his plotting skills.

But after you’ve read Mishani what else is there? Truth is there are more Tel Aviv set crime and thriller dramas on Netflix than on the bookshelves. Hatufim (Prisoner of War) became Homeland on American TV; then there is Fauda about undercover soldiers; then Bnei Aruba, which was (disastrously) adapted by CBS as Hostages and seriously inferior to the Israeli original; Kfulim about random Israelis accused of kidnapping; and the Netflix movie, set in the 1970s, The Angel, adapted from Uri Bar-Joseph’s bestselling novel, The Angel: The Egyptian Spy Who Saved Israel (2016).

Fortunately Liad Shoham is still writing bestsellers, a string of them that has led him to be dubbed “Israel’s John Grisham.” Shoham specialises in page-turning thrillers and, like Grisham, has a background as a lawyer. Shoham always fancied being a writer rather than a litigator and dabbled in some memoir and comedy books before his editor at Kinneret, one of Israel’s largest publishing houses, suggested the thriller genre. He wrote A Week in the Life (2007), a legal thriller featuring a Tel Aviv lawyer accused of murder. It was a hit. He’s gone on hitting ever since. For my money his best are his most socially aware novels—Asylum City (2012) reveals the conditions of African migrants in Israel and the murder of a young activist trying to improve their lot and reveal abuses in the country’s immigration system. Criminals, gang bosses, corrupt police, dodgy aid workers, and self-interested politicians are all hung out to dry. Line Up (2011) tells the story of of a raped woman whose defense rests on an mafia member’s evidence; but he cannot offer this evidence in her support as his real reason for being in the area at the time would mean life imprisonment for him. It’s a superb novel in that whilst it is essentially about a crime it is also about one very bad man’s journey to redemption.

Shoham’s latest novel in English, Blood Oranges (2014), deals with a murdered journalist and police indifference. From the point of view of “Crime and the City,” Blood Oranges is a recommended read as it takes the reader into the heart of the Tel Aviv suburb of Petah Tikva, a well-kept area of light industry and high-tech parks, though in Shoham’s tale this ordinary suburb hides dark secrets.

A few other TA-set crime novels worth mentioning:

In this list of Tel Aviv related crime writing I’ve tried to avoid novels that sensationalize the violence of the Middle East or that aggressively take one side or the other. I’ve ignored the airport thrillers that treat Israel glibly as a trouble spot with little or no local description or understanding of the nuances of the city, country or society. As ever we are hostages to our language and I can only include those Israeli writers in translation. Ram Oren, largely a non-fiction writer in English translation, has been repeatedly recommended to me for his hard-boiled crime fiction, which sadly is not translated. Similarly Yoav Levitas Halevy and Limor Nachmias.

And so, as usual, one last book of particular interest; this one a history and a compelling true crime story concerning murder. In British-controlled Palestine in 1942 the fugitive Avraham Stern was cornered in a flat in Tel-Aviv and shot dead by Assistant Superintendent Geoffrey Morton who claimed Stern was trying to escape. A policeman capturing a ruthless terrorist? Or a freedom fighter executed in cold blood by the forces of British Imperialism? Patrick Bishop’s The Reckoning (2014) reconstructs the events that preceded and then led up to Stern’s death. It is the story of two dedicated men on opposite sides of history of the struggle for the birth of the State of Israel; and an event that resonates still today in the current troubles in the Middle East.

Avraham Stern was shot to death in an apartment in Tel Aviv’s Florentin neighborhood. In 1942 it was a poor area of the city populated by Jewish immigrants from North Africa, Bulgaria, and Turkey. Now it’s gentrified and bohemian earning it comparisons to London’s Shoreditch or New York’s Lower East Side, equipped with cafés, wholefood markets, bars and art galleries. Inspector Avraham Avraham’s beat is less than four miles away in Holon, which has evolved from a neighborhood of working-class bedsitters to a popular suburb with young families. History is all around you in Tel Aviv and in Tel Aviv crime writing too but it’s constantly changing and evolving. Crime writing is one way into Tel Aviv’s geography, which now has hipsters, giant baby strollers, and tech entrepreneurs mingling with the odd killer. 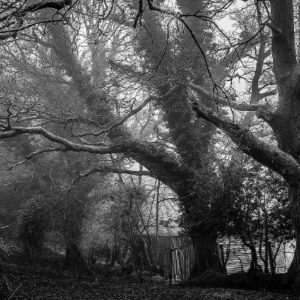 A big, crumbling house, family secrets hidden in dark corners, a heroine with a mystery to solve that might just morph into...
© LitHub
Back to top