La Novela Negra is on the rise again, as a new generation of Argentine crime novelists explores the country's underbelly.

To date my Crime and the City column has covered 50 cities: 23 European locations, 15 cities in Asia and Australia, five in Africa, five in North America (including the Caribbean), and two cities in the Middle East. Disgracefully Latin America has been neglected. There are reasons for this including relatively little crime writing from the countries of South America in English translation and, frankly, my own ignorance of what is available. So I decided to address the omission and widened my own reading horizons over the last few months. And so here we are, at last, in Buenos Aires.

In her recently published study of Argentinian crime writing, Argentina Noir (2019), Cynthia Schmidt-Cruz argues that the country’s current vogue for novelas negras is due to writers embracing a genre that allows them to talk about Argentina’s economic and social malaise in the twenty-first century. Schmidt-Cruz believes that an earlier tranche of Argentinian crime writing mostly looked back to the brutal military junta of the 1970s and 1980s, but that now it is topics such as the rise of organized crime, the perceived corruption during the presidency of Carlos Menem in the 1990s, as well as various recent anti-Semitic terrorist attacks and spate of unsolved murders, that obsess local authors. The vast majority of this writing is set in the nation’s capital, Buenos Aires.

A good introduction is Buenos Aires Noir (2017), in the ever-reliable Akashic Noir series, edited by the novelist Ernesto Mallo. Mallo himself is a playwright, script writer and crime novelist with the Superintendent Lascano series, a couple of which have been translated into English. Needle in a Haystack (2010) is set during the time of the military junta. A trio of dead bodies turn up in late 1970s Buenos Aires—two look like the trademark killings of the junta’s infamous death squads, but the third is different. The novel is effectively a journey through a Buenos Aires devoid of democracy and controlled by the brutal regime of the Generals. The second Lascano novel, Sweet Money (2011), moves the action into the 1980s, around the time of the fall of the dictatorship. The times they are a’changing and Lascano, no longer a cop, is caught between his old police bosses and the Apostles gang, a ruthless group of drug-dealing cops.

Claudia Piñeiro is a Buenos Aires born and based novelist and screenwriter, best known for her crime novels. We have London’s Bitter Lemon Press (who have also translated Ernesto Mallo and Cuba’s Leonardo Padura into English) to thank for four Piñeiro novels. Firstly there’s Thursday Night Widows (2009) which uses elements of a real crime to delve into a series of murders among Buenos Aires’s professional classes in their gated communities. Then Betty Boo (2016), with more high-class murders among the city’s media elite. Next there’s a crime passionnel called All Yours (2011); and more recently the white-collar murder tale A Crack in the Wall (2013). Piñeiro’s work, much of which has been adapted for TV and film, is not the Argentina of juntas or social collapse, but the elite worlds of good restaurants, exclusive housing complexes and the new wealthy of Buenos Aires.

Let’s finish this tour though the writing of Buenos Aires with three writers who show that crime writing can be of the highest literary merit. My Fathers’ Ghost is Climbing in the Rain (2013) is the work of Patricio Pons, nominated as one of Granta’s Best Young Spanish-Language Novelists some years ago. The novel won many awards at home and abroad. It begins with the narrator, a writer living abroad in Germany, returning to Argentina. There, he discovers that his dying father has become obsessed with an unsolved local murder. He too begins to delve deeper in to the case and relives his own tumultuous childhood during the years of the military junta.

Sergio Olguin’s The Fragility of Bodies (2019) concerns a series of “accidents” along the train lines of Buenos Aires and the death of a train driver. The novel is super contemporary and takes the reader into the working-class drug-infested neighborhoods of the city.

And finally, Guillermo Orsi and his two contemporary novels that have been translated into English—No-One Loves a Policeman (2011) and Holy City (2013). Both policiers, No-One Loves a Policeman features disgraced BA cop Pablo Martelli in a 2001 Argentina in economic meltdown. Orsi combines noir cityscapes with a very dark humour again in Holy City when a passenger liner runs aground on the muddy banks of the Río de la Plata. One by one, its passengers are abducted by Buenos Aires’s criminal classes.

Writers like Olguin and Orsi show that Buenos Aires crime writing has, as Cynthia Schmidt-Cruz argued at the start of this piece, moved beyond the junta and the Dirty War that defined Argentinian novelas negras for so long and are now concerned with the contemporary city. Noir, dark humour and economic struggles do indeed seem to be the new obsessions of Argentina’s crime writers.

For more, read “Borges, Bioy Casares, and the Dawn of Argentine Mystery,”
by Scott Adlerberg. 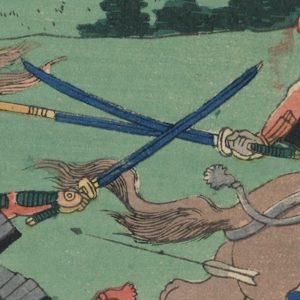 The boxy, seven-story building next door to Tokyo’s famous Ryougoku Sumo Hall stands off the ground on four squat legs,...
© LitHub
Back to top