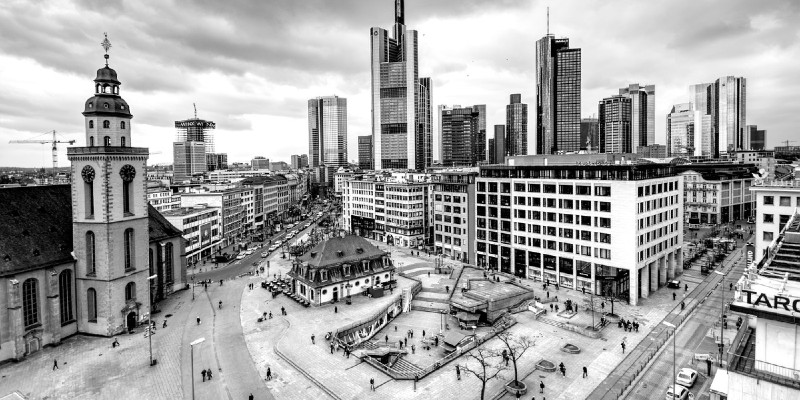 Germany's fifth largest city has a bad rap for being boring. Behind all those book fairs and convention centers, there's a mystery.

OK, let’s deal with the elephant in the room from the get-go—some people have suggested that Frankfurt is a bit boring. There, it’s out there. I rarely hear a good word said about Germany’s fifth largest city. And there are reasons to agree. Anyone who’s been stuck in the city at one of its many conferences or conventions (including the giant annual Frankfurt Book Fair) has probably experienced the city’s anonymous hotels and conference centres. The French crime and historical fiction writer Hubert Monteilhet went in the 1970s and was so bored he wrote a satirical crime novel, Murder at the Frankfurt Bookfair (1976)! And there’s a lot of ‘70s high rise architecture that’s not winning any popularity awards. While the airport, and that long schlep between terminals, is a drag often endured by Europeans having to transfer for long haul flights.

But then, brace yourself and dive in and you’ll find that there’s some great restaurants, the banks of the River Main can be a delightful stroll, there’s some excellent museums (I would recommend the fascinating Deutsches Filminstitut & Filmmuseum on the banks of the Main), while leafy streets of Sachsenhausen have some amazing villa architecture and, of course, there’s the eponymous Frankfurter Würstchen. While not forgetting Buchhandlung Wendeltreppe (The Spiral Staircase) on Brückenstraße, Europe’s oldest dedicated crime writing bookstore.

But still, Frankfurt’s not an easy city to love…

Though, hey, wait a minute…Agatha Christie went and wrote one of her later and more curiously interesting novels, Passenger to Frankfurt (1970). She was 80 that year and Collins, her publisher, jiggled the figures slightly to claim it was her 80th book. It’s not a detective novel and there’s no murder. Passenger to Frankfurt is a spy novel—Sir Stafford Nye, a middle-aged diplomat, gets wrapped up in some international intrigue. It’s not really vintage Christie, though it is a fascinating insight into how the Queen of Golden Age Crime saw the world of long-haired students vs skinheads, Ban the Bombers, psychedelic drugs, and free love at the time. The book received some rather unkind reviews and while it ain’t fussy Hercule Poirot or nosy Miss Marple, it’s still got some of that old Christie zing.

More up to date is German author Nele Neuhaus’s Bodenstein and Kirchoff procedural series set in and around the mountain town of Taunus, near Frankfurt—all geothermal springs and spas. There’s nine Bodenstein and Kirchoff books in German but they’re being translated into English, though not necessarily in the same order confusingly. In English the first in the series is Snow White Must Die (2010), although this is the fourth in the series in Germany (where it is consistently best-selling). Anyway, Detectives Pia Kirchoff and Oliver von Bodenstein investigate what might be an accident or a suicide on an autobahn. Visiting the dead woman’s home village they hit a wall of silence.

In the UK the novel got a major boost when it was a choice of the Richard and Judy Book Club, run by a rather saccharine married pair of daytime TV presenters. This was enough to ensure more translations. Big Bad Wolf (2013) is book two with Pia and Oliver pulling a body out of the Main River that leads them back to the comfortable world of middle-class Frankfurt. In Ice Queen (2019) a Holocaust survivor is found dead in his Frankfurt home forcing the detective duo to delve back into Germany’s dark past. And finally (so far at least) in To Catch a Killer (2015) a series of people with seemingly no enemies, no criminal past, and no reason to be shot are indeed shot dead.

In Dorothy Cummings McLean’s contemporary Ceremony of Innocence (2013) journalist Catriona McClelland covers from her Frankfurt base. She’s pretty committed to her job. Her fed-up German boyfriend, leaves her for Suzy Davis, an idealistic young Canadian who is involved with a left-wing protest movement. But then Suzy is murdered.

And finally, for some time now the most talked about books on the Frankfurt crime scene have been the neatly fast-paced Kemal Kayankaya series from the author Jakob Arjouni. Sometimes it takes an outsider to be a great detective, and Kemal Kayankaya is just that: a Turk working as a private investigator in Frankfurt. Jakob Arjouni (who unfortunately died in 2013) was born in Frankfurt and became something of a crime writing wunderkind when he published his first Kemal Kayankaya novel, Happy Birthday, Turk! at just twenty years old in 1984. His character Kemal Kayankaya was born in Turkey but adopted at a very young age and brought up by a German family—culturally German yet with an appreciation of the outsider. Kudos to No Exit Press for translating the Kayankaya series into English in 2013.

In Happy Birthday, Turk! a Turkish labourer is stabbed to death in Frankfurt’s red-light district attracting little interest from the police. Kayankaya takes up the case and gives the reader a tour through Frankfurt’s less salubrious back strasses. In More Beer members of a radical ecological group are accused of the murder of the director of a chemical plant near Frankfurt while in One Man, One Murder Kayankaya delves into the shady side of Germany’s immigration lawyers and people trafficking. In Kismet Kayankaya investigates the mafia that controls Frankfurt’s station quarter and then finally in Brother Kemal our hero is mixed up in kidnappings in Frankfurt’s diplomatic quarter and the possibility that Islamic extremists may target the Frankfurt Book Fair (sometimes you’d think the Fair was the only thing that ever happens in Frankfurt it crops us so often!)

Jakob Arjouni certainly brought something new to the tradition of the German “krimi” novel in terms of character while his writing style has been noted as reminiscent of George Simenon and some of Kemal Kayankaya’s dialogue to the snappiness of Raymond Chandler’s prose. Despite Frankfurt being a long way from Los Angeles in terms of kilometres, weather and crime rates Arjouni’s PI walks ‘down these mean streets a man must go who is not himself mean, who is neither tarnished nor afraid’ just as much cynical old Marlowe. 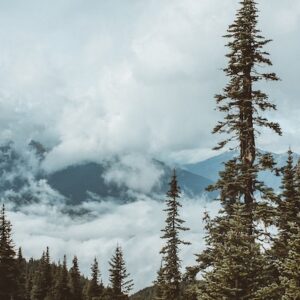 Imagine you’re a mother planting blueberry bushes at home in the foothills of the Cascade Mountains when your four-year-old...
© LitHub
Back to top