Straddling continents and cultures, Istanbul has long been a hotspot for espionage and crime fiction.

The Turkish city of Istanbul—once known as Byzantium, Constantinople or Stamboul—has long been a honeypot to thriller, especially espionage, writers. Straddling the Bosphorus, bridging Europe and Asia, it was a vital trade route from the Black Sea to the Aegean. Historically a melting pot (not always peacefully) of cultures, religions and races—a city of antiquity and modernity simultaneously.

Arrival in the city has inspired many books. Graham Greene’s second novel, Stamboul Train (1932) takes places among a disparate group of travelers, all with secrets, on a luxury train to Istanbul. It is a novel that cements what would become Greene’s trademark style of a pervading sense of unease. Agatha Christie (who knew Turkey well thanks to visits with her archaeologist husband Max Mallowan) chose Istanbul as the city in which Hercule Poirot would receive a telegram prompting him to return to London and so booking himself a train ticket and ultimately having to solve the Murder on the Orient Express (1934)).

The great English espionage stylist of the pre-war years Eric Ambler set several novels in Turkey. Perhaps the best is Journey into Fear (1940) which features his recurring character Colonel Haki, the taciturn but basically likable head of Turkish Security. A British Engineer is in Istanbul having completed a deal that could cement an Anglo-Turkish alliance and see Turkey join the Allied cause in World War Two. Nazi spies and a Romanian hitman are out to kill him. However, Ambler’s slightly earlier novel The Mask of Dimitrios (known in the USA as A Coffin for Dimitrios, 1939), is his best novel for pure Istanbul flavor. English crime novelist Charles Latimer is traveling in Istanbul and meets Colonel Haki who tells him of the mysterious Dimitrios—an infamous master criminal whose body has just been fished out of the Bosporus. Fascinated by the story, Latimer decides to retrace Dimitrios’ steps across Europe to gather material for a new book. But, as he asks questions about Dimitrios, Latimer’s own life is placed in danger.

Of course it’s inevitable that Bond would visit Istanbul—actually several more times in the movies than in Ian Fleming’s novels. 007’s major Turkish outing is in From Russia, With Love (1957), the fifth of his twelve Bond novels. It was inspired by Fleming’s stay in the city writing about an INTERPOL conference for the Sunday Times. Not much remembered now is American writer Dorothy Gilman’s comedic thriller The Amazing Mrs. Pollifax (1970) features a middle-aged New Jersey suburban housewife recruited by the CIA and stationed in Istanbul.

The fascination with Istanbul as a city of intrigue and suspicion has continued for more contemporary writers (though often harking back to the city’s espionage ‘golden age’). Olen Steinhauer’s The Istanbul Variations (2006) is set in the 1960s Cold War. Peter Husak, a young Czech student, is captured as he tries to flee the country. The novel features two investigators assigned to the case: homicide detective Gavra Noukas and Brano Sev, an experienced Czech secret policeman who repeatedly appears in several later Steinhauer novels. Seven years later, a People’s Militia homicide investigator with defection on his mind boards a plane for Istanbul. When it is hijacked by Armenian terrorists, the Turkish authorities try to establish contact—but the plane explodes in mid-air. Joseph Kanon’s Istanbul Passage (2012) sees an expatriate American businessman, Leon Bauer, drawn into the city’s post-war shadowy underworld during World War Two. Then the war over, the city is a thick of stew of Cold War spies, war criminals on the run and dodgy dealings.

And most recently, although it is mostly set in the Turkish capital of Ankara, August Thomas’s debut novel Liar’s Candle (2018), is a great read. Penny Kessler, a young intern at the US Embassy is caught up in a terrorist attack to which she is assumed to be a witness and so at risk from multiple angles. In her attempt not to get killed and to uncover the truth of the attack, Penny reluctantly partners with a rookie CIA officer on his first overseas assignment.

Arguably the queen of contemporary Turkish crime writing is actually an Englishwoman called Barbara Nadel. So far Nadel has written twenty-one books featuring Çetin İkmen, a chain-smoking and hard-drinking Istanbullu detective. More soft- than hard-boiled, the İkmen novels, starting with Belshazzar’s Daughter (1999) through to A Knife to the Heart (2019), feature his colleagues Mehmet Süleyman, Balthazar Cohen and an Armenian pathologist Arto Sarkissian.

Esmahan Aykol’s Hotel Bosphorus (2011) introduces Kati Hirschel, the owner of Istanbul’s only crime bookshop. When the German director is found murdered in his hotel room, Kati launches her own maverick investigation. It’s a fun mystery but also a wonderful book about Istanbul and Turkish society. Kati returns in Baksheesh (2013) where a man is found dead in her apartment and then again in

Divorce Turkish Style (2015) Kati is on the trail of the killer of a beautiful divorcee. Aykol herself is a Turkish-born German writer who grew up in Istanbul, ran a pub, moved to Berlin and now writes the Kati Hirschel novels in Turkish.

Jason Goodwin studied Byzantine history at Cambridge and then wrote several travel books about Turkey. Out of those spun his novels featuring an Ottoman investigator called Yashim, who happens to be a eunuch living in Istanbul during the 1830s. The first book in the series, The Janissary Tree (2006) won the Edgar Award for Best Novel in 2007. Goodwin’s eunuch moves around nineteenth century Europe but the fourth Yashim novel, An Evil Eye (2011), centers on the Ottoman sultan’s harem, and the final Istanbul adventure, The Baklava Club (2014), involves Italian and Polish revolutionaries in Istanbul. By the way if you get hooked on Yashim you can also get his recipes in Yashim Cooks Istanbul (2016), a culinary spin-off title!

Burhan Sonmez has crafted a highly literary crime novel in Labyrinth (2019). A blues singer, Boratin, attempts suicide by jumping off the Bosphorus Bridge, but survives. However, he has lost his memory and can’t remember why he wanted to die. He knows that the Ottoman Empire fell, and that the last sultan died, but has no idea when. He must search for himself in Istanbul and discover just what he was involved in.

And finally, as often in this column, a book that doesn’t sit completely within the traditional crime genre but should be of interest to crime fiction readers. Sabahattin Ali was one of Turkey’s best-known journalists and writers in the first half of the twentieth century. Though born in a village that is now, with Europe’s ever shifting borders, part of Bulgaria, he is associated with Istanbul where he trained as a teacher before a sojourn in Berlin. Returning to Turkey his poetry, which often attacked Kemal Atatürk, the father of the Turkish republic, got him jailed repeatedly. He fought in World War Two but was jailed again soon afterwards.

Ali is best remembered for his novel Madonna in a Fur Coat (1943 and now reissued as a Penguin Modern Classic), a novel centering around a Turkish man who travels to Weimar Germany and falls in love with an artist in 1920s Berlin. When it was first published it was read and appreciated only by a small group of Turkish intellectuals. However, more recently it was become a cult novel in Turkey—new editions outselling even Orhan Pamuk. Perhaps part of the renewed appeal of Sabahattin Ali is that in 1948 he applied for a passport and was denied. He went to the Turkish-Bulgarian border, hoping to return to his hometown. There he disappeared, presumed murdered, his body never found. Ever since rumors have swelled as to who killed Sabahattin Ali—a cross-border people smuggler he had paid who was well known for supposed connections to the Turkish secret police? Or the secret police themselves angered by his political opinions. The case remains unsolved. 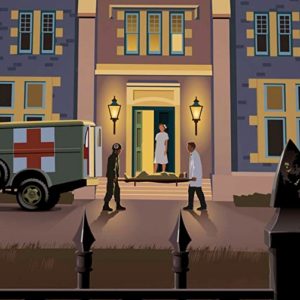 Another week, another batch of books for your TBR pile. Happy reading, folks. * Alyssa Cole, When No One Is Watching (William...
© LitHub
Back to top