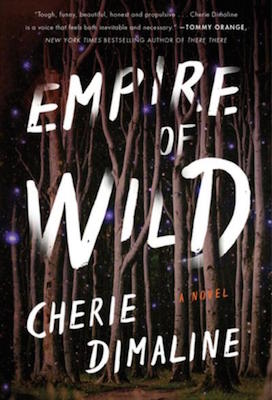 The following is an exclusive excerpt from Empire of Wild, by Cherie Dimaline. Joan has been searching for her husband Victor for a year, after he vanished during their first fight. Her Métis family is steeped in legends about what might be prowling around in the fog, and she doesn't turn to them until she finds her husband and discovers he believes he is someone else, a preacher.

Old medicine has a way of being remembered, of haunting the land where it was laid. People are forgetful. Medicine is not.

The town of Arcand was a church, a school, a convenience store, a bootlegger and a crowd of stooped houses leaning like old men trying to hear a conversation over a graveyard of Greniers and Trudeaus. Sundays were for God, though most people prayed out on the lake, casting Hail Marys with their fishing lines into the green water, yelling to the sky when they didn’t get lucky or when they did.

Parties were held in kitchens. Euchre was a sport. And fiddles made the only sound worth dancing to. Any other music was just background noise for storytelling and beer drinking and flirting. Or for providing the cadence for fight choreography when you just had to beat the shit out of your cousin.

The people who lived in Arcand were brought from another place, moved off Drummond Island when it was handed over to the United States in 1828. They were halfbreeds, the children of French voyageurs and First Nations mothers, and Métis people who had journeyed from Manitoba. The new colonial authorities wanted the land but not the Indians, so the people were bundled onto ships with their second-hand fiddles and worn-soft boots. They landed on the rolling white sands of the Georgian Bay and set up their new homes across from the estab- lished town that wouldn’t welcome them. At first they were fine on their own, already flush with blacksmiths and hunters, fishermen and a hundred small children to toss stones into Lake Huron. If they had known then how each square inch would have to be guarded, how each grain of sand needed to be held tight, perhaps they would have stacked the rocks instead of gift- ing them to the lake.

Over the years, without treaty and without wealth, the half- breeds were moved away from the shorelines where million- dollar cottages were built in a flurry of hammers on lumber, so many at one time it was as if the shore were standing to an ovation. Family by family, the community was pushed up the road.

Catholic by habit, they prayed on their knees for the displacement to stop, for the Jesus to step in and draw a line between the halfbreeds and the new people. Those among them who carried medicine also laid down coarse salt as protection against the movement. This salt came from the actual bones of one particular Red River family, who drew their own boundaries when the hand of God did not reach down to do it for them.

Eventually, inevitably, the shore belonged to the newcomers who put up boathouses and painted gazebos and built docks where sunburnt grandchildren would cannonball into June waters, calling for someone to watch what they could do. And the halfbreeds? They got the small settlement up a dirt road. They got Arcand.

Some of the people managed to hold on to the less desirable patches of waterfront, areas with no beach or too many lilies like the decaying fingers of a neglected woman pushing out of the muck. These were the older people, who refused to head up the road to Arcand. They kept rickety docks where the fishermen tied their rusted boats in exchange for some of the catch. The heavily wooded acres that bloomed out from Arcand toward the highway and the smaller roads with hair- pin curves snaking down to the occupied shore, these areas, too, remained up for grabs. In any halfbreed home there were jars of coins and a wistful plan to buy back the land, one acre at a time if need be.

On these lands, in both the occupied places and those left to grow wild, alongside the community and the dwindling wildlife, there lived another creature. At night, he roamed the roads that connected Arcand to the larger town across the Bay where Native people were still unwelcome two centuries on. His name was spoken in the low tones saved for swear words and prayer. He was the threat from a hundred stories told by those old enough to remember the tales.

Broke Lent? The rogarou will come for you.

Slept with a married woman? Rogarou will find you.

Talked back to your mom in the heat of the moment? Don’t walk home. Rogarou will snatch you up.

Hit a woman under any circumstance? Rogarou will call you family, soon.

Shot too many deer, so your freezer is overflowing but the herd thin? If I were you, I’d stay indoors at night. Rogarou knows by now.

He was a dog, a man, a wolf. He was clothed, he was naked in his fur, he wore moccasins to jig. He was whatever made you shiver but he was always there, standing by the road, whistling to the stars so that they pulsed bright in the navy sky, as close and as distant as ancestors.

For girls, he was the creature who kept you off the road or made you walk in packs. The old women never said, “Don’t go into town, it is not safe for us there. We go missing. We are hurt.” Instead they leaned in and whispered a warning: “I wouldn’t go out on the road tonight. Someone saw the rogarou just this Wednesday, leaning against the stop sign, sharpening his claws with the jawbone of a child.”

For boys, he was the worst thing you could ever be. “You remember to ask first and follow her lead. You don’t want to turn into Rogarou. You’ll wake up with blood in your teeth, not knowing and no way to know what you’ve done.”

Long after that bone salt, carried all the way from the Red River, was ground to dust, after the words it was laid down with were not even a whisper and the dialect they were spoken in was rubbed from the original language into common French, the stories of the rogarou kept the community in its circle, behind the line. When the people forgot what they had asked for in the beginning—a place to live, and for the community to grow in a good way—he remembered, and he returned on padded feet, light as stardust on the newly paved road. And that rogarou, heart full of his own stories but his belly empty, he came home not just to haunt. He also came to hunt. 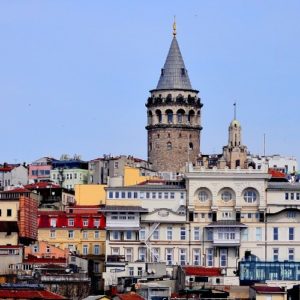 The Crime Novels of Istanbul The Turkish city of Istanbul—once known as Byzantium, Constantinople or Stamboul—has long been a honeypot to thriller,...
© LitHub
Back to top