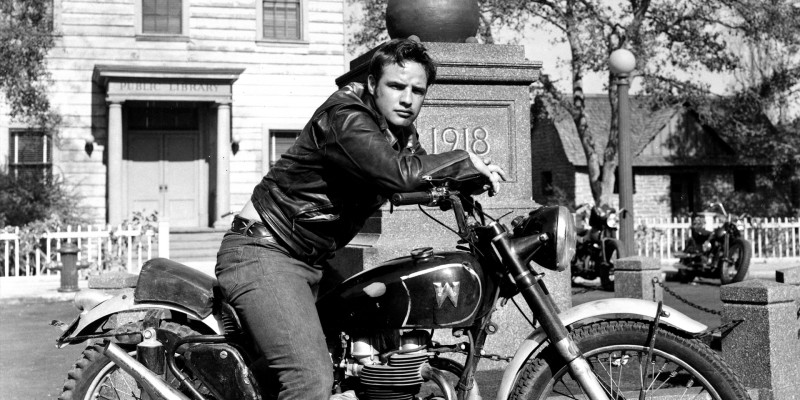 Over the past century of American culture, the motorcycle has proven troublesomely iconic. A two-wheeled symbol of the open road and independence? Of course. But the image of the motorcycle is also tightly bound with criminality and mayhem—it’s the vehicle of vagabonds, gangs, and others intent on undermining the nation’s moral order.

This seedy reputation isn’t wholly undeserved. The Justice Department has spent the past several decades pursuing motorcycle gangs such as the Hells Angels, which they consider organized crime syndicates involved in everything from drug trafficking to prostitution. (The lawlessness hasn’t curbed the widespread fascination with motorcycle outlaw culture, of course: the people who ride around on motorcycles while dressed as gang members almost certainly outnumber the actual motorcycle gang members in this country.)

The American fascination with the motorcycle and motorcycle gangs has produced an interesting (and diverse) collection of crime fiction films and books over the years. In many of them, motorcyclists are fundamentally misunderstood, hated because they refuse to conform to conservative ideas of morality; in others, they’re stand-ins for larger issues of criminality, fatherhood, and fate; and sometimes, they’re just straight-up villains. 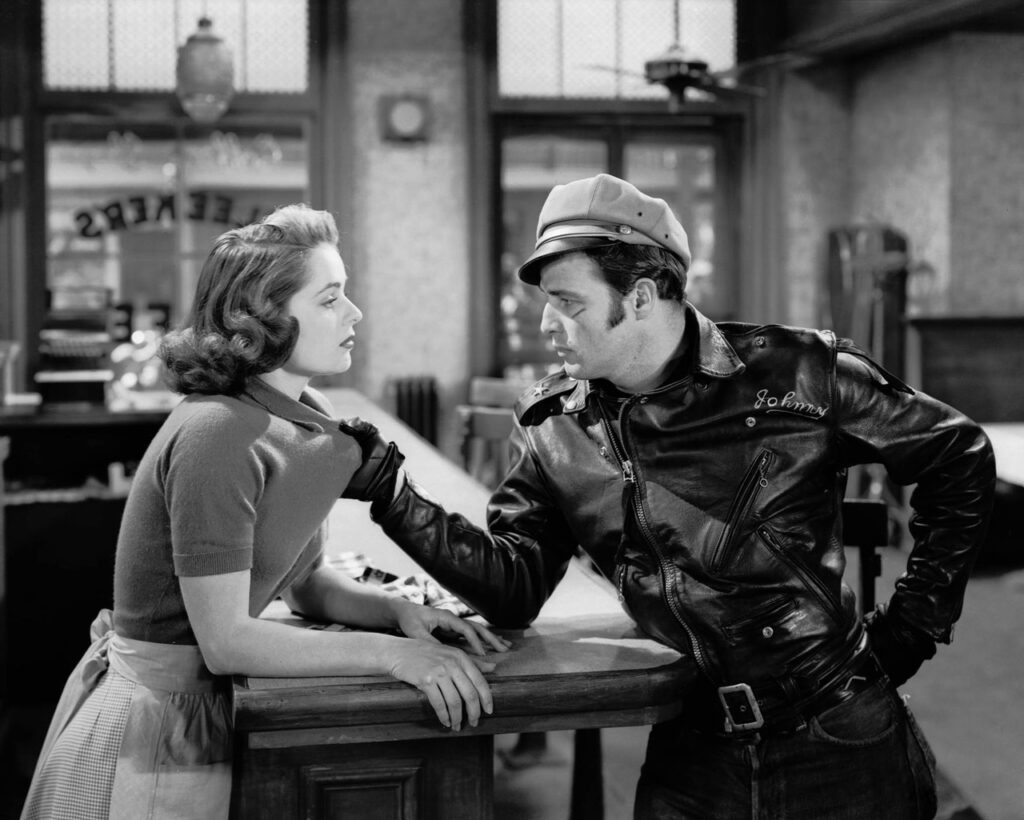 One of the movies that made young Marlon Brando into an icon, “The Wild One” centers on the Black Rebels Motorcycle Club (BRMC) riding into a small California town for a race—and igniting tensions between the local citizenry and the leather-clad bikers. A rival gang appears and chaos erupts, climaxing in a death. Although controversial at the time—and banned outright in Britain for 14 years on the grounds of “unbridled hooliganism”—it’s tame by modern standards. That said, it’s well worth watching for Brando, whose outfit and insouciant attitude toward all kinds of authority no doubt inspired thousands of juvenile delinquents:

Its merits as a film aside, the success of “The Wild One” unleashed a subgenre of outlaw-motorcycle films, most of which were low-budget B-flicks, and some of which featured famous actors before they broke big, such as Jack Nicholson and Bruce Dern. As with so many genres, it then mated with other genres such as horror, giving us questionable gems like “Psychomania” (1971) and “Chopper Chicks in Zombietown” (1989). 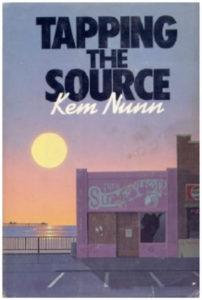 Kem Nunn’s California crime-fiction masterpiece is largely considered a “surf noir” novel, and with good reason: surfing not only drives the plot, but also the novel’s spiritual underpinnings. Every time the characters enter the ocean with their boards, they seem to commune with the universe—and transcend the grittiness of their lives onshore. But motorcycles, and the protagonist’s ability to repair them, also feature prominently in the plot; they’re just as much as symbol of the characters’ outlaw nature as the drugs, fighting, and surfing. 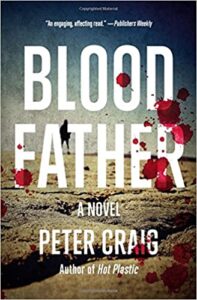 A nasty, sleek novel of parental redemption through gunfire and explosions (made into a nasty, sleek movie in 2018), “Blood Father,” by Peter Craig, centers on John Link. Once a very bad dude—in the book’s opening pages, he tells a story to his AA group about crashing his motorcycle at high speeds on the Pacific Coast Highway, spilling meth everywhere—Link is trying to stay clean and sober: “A man who once flew through traffic on a rebuilt ’56 Harley 74 with a suicide shift, power-jumped with hot-cams, now puttered down main street in a Chevy Nova.”

When his estranged daughter shows up in serious trouble, though, gray-bearded link must revert to his old ways. By the book’s final pages, he’s become a violent trickster, so calm in the middle of a gunfight that he’s almost robotic. In doing so, he achieves a measure of redemption—the motorcycle outlaw made good. 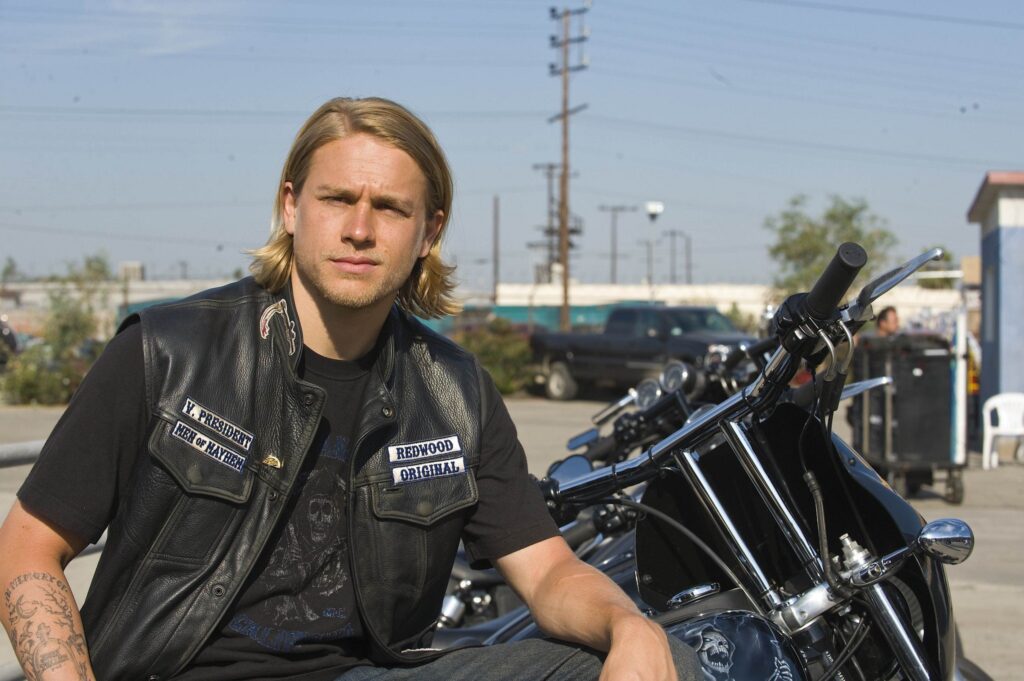 On paper, it’s one of those concepts that make television executives salivate uncontrollably: A fast-paced crime series about a California motorcycle club, the Sons of Anarchy, that sells guns—a conceit overlaid with a family drama with unsubtle allusions to “Hamlet” and “Macbeth.”

Amidst seven seasons’ worth of leather-clad motorcycle-gang members growling about loyalty and club laws, there’s an interesting thematic tension at work. Jax Teller (Charlie Hunnam), the son of the club’s founder, is seemingly fated to one day take over as the club’s president; while he’s loyal to the club, he’s also disquieted by the backstabbing among its members and the escalating violence necessary for it to endure. The ultimate tragedy is that, despite his efforts, his loyalty and legacy will drive him to commit some of the most heinous acts imaginable. Like Brando in “The Wild One,” he’s operatically conflicted. 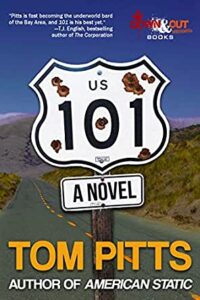 Tom Pitts’s novel takes place in California on the verge of pot legalization. Up in the wilds of Humboldt County, the weed growers are still doing great business—including Vic Thomas, a grower with a long history of lawbreaking. However, his quiet life is upturned when an old flame’s son shows up, dragging his girlfriend and a lot of stolen money from the Russian mob. A motorcycle gang named the Dead BBs and an angry cop make the ensuing ruckus even more violent and complicated.

Because make no mistake about it: the Dead BBs are bad. “Not just an outlaw, but a fucking criminal,” a character muses at one point. It’s a fun, breezy ride, a bit of gritty California noir that moves at exceptional speed—with motorcycle outlaws you love to hate. 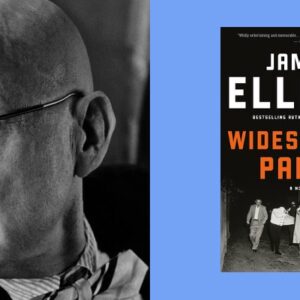 James Ellroy, now 74, is known for his sprawling, densely plotted and highly-stylized novels about America in the mid-twentieth...
© LitHub
Back to top