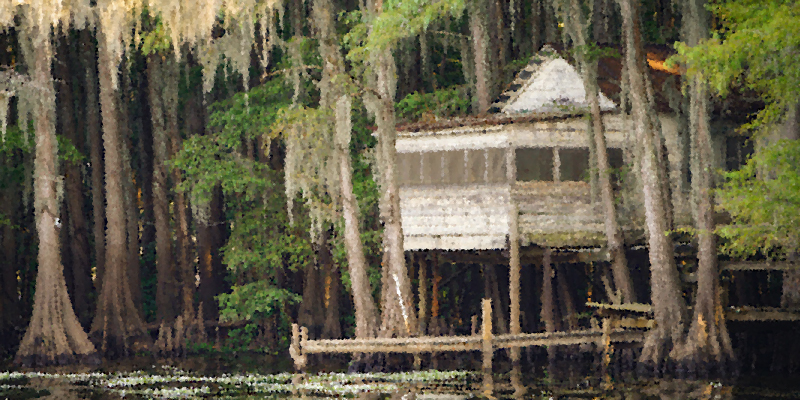 These authors "each extend Poe’s Gothic sensibility to show us the frailty of our superficial, quotidian existence."

three times through the chest. Then he put his gun down on the

ground and took off his glasses and began to clean them.

The above quote comes near the end of Flannery O’Connor’s shockingly brutal short story “A Good Man Is Hard to Find.” That story, from the early 1950s, defines the modern Southern Gothic sensibility in American fiction. A normal, everyday family (a father, a mother, three children and a grandmother) becomes involved in blood-drenched horror when they encounter a stone-cold killer on a vacation trip. Inspired by Poe’s equal bloodthirstiness, O’Connor (who attended Catholic mass regularly) with raw irony ripped from the newspaper headlines shows us the snake in the garden of Eden.

The family in “A Good Man Is Hard to Find” are just ordinary folks going on a vacation from Tennessee to Florida.  By pure happenstance the grandmother sees in the newspaper a photograph of the recently escaped killer called the Misfit. By pure happenstance the family takes a detour up the wrong dirt road to view a southern mansion that the grandmother recalls seeing in her youth. Of course they encounter the Misfit. And the grandmother identifies him from the newspaper photo. And the Misfit, to cover his tracks, executes the entire family in cold blood. Until they have a road accident and meet the Misfit, the story is a hilarious comedy. In an instant the comedy turns savage and deadly. Innocence goes out the window.

Near the end of O’Connor’s story a debate rages between the Misfit and the grandmother as to whether or not Jesus raised people from the dead. It’s simple, the Misfit says. If He did raise the dead, you have no choice but to follow Him. If He didn’t, then you might as well have fun (O’Connor’s word is “enjoy”) murdering and pillaging at random. And, says the Misfit, since he wasn’t there, he has no idea which is true, so his life is a misery. He can’t even enjoy being a psychopath.

The silly, childishly innocent grandmother reaches out to the Misfit and says: “Why you’re one of my babies.” That’s when the Misfit shoots her dead as a doornail. While Poe sets his shiver-inducing Gothic nightmares in a pagan landscape where the story is self-sufficient, O’Conner uses spoof, coincidence and random Gothic violence to show the inability of fallen humanity to comprehend Jesus and the larger reality He represents. But falling back on some religious fantasy as solace for our endless slaughter of each other seems a pallid response. In Poe’s “The Cask of Amontillado” as the revenge seeking Montresor puts the final bricks in place to incarcerate the luckless Fortunato in his tomb, Fortunato screams out to his tormentor:

“For the love of God, Montresor!”

To which Montresor replies:

At this point the reader quivers in terror. But at the same time smiles. Who doesn’t love a nightmare as long as it’s not happening to you personally.

Certainly our bland, rote and meaningless responses to the massacres in Uvalde, Texas, at the Tops Friendly Market in Buffalo, at Sandy Hook Elementary School and at the high school in Parkland, Florida, highlight a failure of courage in the face of nightmare. A Biblical explanation trivializes these 21st century mass killings by deranged young men.

Harry Crews, another modern master of the Southern Gothic, in his 1976 novel A Feast of Snakes offers up a highly entertaining narrative of events leading up to a mass murder. A Feast of Snakes is a hilarious but unsparing expose of Southern redneck, small town misery and violence. Like O’Connor’s tale, Crews also sets his story in a fallen garden. It’s the annual November rattlesnake hunt in Mystic, Georgia. Snakes abound—in underground nests where they hibernate during the cold months, emblazoned on the uniforms of the high school football cheerleaders and lurking in the pants of the local sheriff whose tastes run to raping young black women. Here are the opening two sentences of the novel involving the head high school football cheerleader Hard Candy:

She felt the snake between her breasts, felt him there, and loved him

there, coiled, the deep tumescent S held rigid, ready to strike. She loved

the way the snake looked sewn onto her V-neck letter sweater, his hard

diamondback pattern shining in the sun.

Beyond establishing that we are in the fallen garden of Eden, religion plays no further role in Crews’ novel. The main protagonist, Joe Lon Mackey, is the former star quarterback of the high school football team. But now he’s graduated and two years later leads a life of quiet and not so quiet desperation with a young wife with bad teeth, two screaming children and a dead-end existence selling liquor out of the back room of the family store. Joe Lon’s old flame, Berenice (head cheerleader during his senior year but who went off to college leaving Joe Lon in the dust) is returning for the snake hunt. Will they reunite?

It’s the wild, party weekend of the snake hunt. Joe Lon and the current high school football quarterback Willard Miller, surrounded by a crowd of oddballs, engage in manly diversions including boozing, weightlifting, fighting and attending the local dog fights. And, of course, Joe Lon beds Berenice in one of the funniest and saddest sex scenes in literature. Like “A Good Man Is Hard to Find,” the first half of Crews’ story places Joe Lon and Willard and other locals including the sheriff and the high school football coach under a dark, satiric microscope as locals and out-of-towners party, scrap, fight and fornicate, leading up to the day of the snake hunt. Then suddenly, like the murders in O’Connor’s tale, out of nowhere violence explodes on the pages. The young black girl raped by the sheriff uses a straight razor to cut off his penis. When the champion fighting dog Tuffi, belonging to Joe Lon’s father, Big Joe, loses in the dog fights, Big Joe beats the dog to death. And finally on the day of the snake hunt Joe Lon opens fire with a shotgun killing Berenice and random participants before a mob throws him in the rattlesnake collection pit.

While O’Connor cloaks the Misfit’s violence in the veneer of the fallen garden mythos, the violence of Crews’ players erupts out of the sociological circumstances of the desperate and pointless lives of his characters. This bottomless ennui creates a bubbling witches brew of mayhem and madness. Joe Lon could easily be a doppelgänger for the newspaper headline mass killers at Uvalde, Buffalo, Sandy Hook and Parkland.

As relief from Crews’ nihilism, Toni Morrison’s Gothic-ish novel Sula (1974) offers an upbeat antidote. The lives of two black women, Sula and Nel, intertwine like vines in the black neighborhood (‘the Bottoms’) of a small river town. There are flashes of violence and Gothic horror in the story. Sula throws a small child into the river. He sinks like a stone. Neither she nor Nel do anything. Hannah (Sula’s mother) sets her heroin-addicted son on fire. Hannah herself catches fire, then is boiled to death. Death by fire & water. But these are only incidents. The overall tone of Sula is of acceptance of the tears and travails of this mortal coil (to wax Shakespearian). “The purpose of evil was to survive it,” writes Morrison. “They determined to survive floods, white people, tuberculosis, famine and ignorance.”

Witchcraft and God and lost innocence dance through the pages of Morrison’s novel. The entire community believes that Sula is a witch when she returns after a ten-year absence. And she: “slept with white men.” “She came to their church suppers without underware.”

“She went to bed with men as frequently as she could. It was the only place

where she could find what she was looking for: misery and the ability to feel

great sorrow…she thought she liked the sootiness of sex and its comedy;”

call soft obscenities up into her face. As she rocked there, swayed there, like

a Georgia pine on its knees.”

intensity of a man about to leave for Dayton.”

Sula combines smalltown black life from 1919 to 1940, Sula’s coming of age and beyond and Southern Gothic and magic realism details—masterfully told. The same rhythm of tragedy and acceptance, hope and its opposite in the pages of Sula also runs deep through the exquisitely filmed Gothic movie, Eve’s Bayou (writer and directed by Kasi Lemmons, 1997), a tale of the lost innocence of a black girl—an excellent companion to Morrison’s novel.

Which brings us to one final superlative Southern Gothic crime fiction writer, Donald Ray Pollock, author of the novel The Devil All the Time (2011). Pollock toiled for 30 years at a papermill in south central Ohio—not unlike one of the desperate characters in Crews’ A Feast of Snakes—before earning a degree from Ohio State-Chillicothe and taking up writing. Somehow Pollock salvaged from a blue-collar life a clear, limpid prose to tell his tale of murder and mayhem as if he were talking to you over a couple of beers. Interestingly, in the excellent silver screen adaptation of The Devil All the Time (directed by Antonio Campos, 2020), it is Pollock’s own voice we hear narrating the voiceovers.

As in O’Connor’s story, religion plays a major role in Pollock’s novel. But for Pollock religion is the road to evil and madness. Deranged itinerant preachers abound in The Devil All the Time. One stabs his wife in the neck with a screwdriver because he thinks he has the power to bring her back from the dead. Nope. Another sacrifices animals to Jesus on the cross to cure his wife’s fatal cancer. Nope. A third preacher seduces underage girls—one of whom, Lenora, is the stepsister of the novel’s hero, Alvin Eugene Russell. Besides bonkers backwoods revivalists, Pollock throws into the mix a husband-and-wife serial killer team who prey on young male hitchhikers and a corrupt sheriff who is the brother of the serial killer wife. The characters and their lives intertwine and twist back on themselves like the inbred gene pool of remote and insular small towns.

When Lenora becomes pregnant and hangs herself. Alvin stalks the preacher and discovers his fetish for young females. He confronts the preacher and shoots him dead. Thus begins Alvin’s quest. Unknowingly, Alvin becomes the avenging angel. The serial killers and the corrupt sheriff are next on his list. Like Morrison, Pollock’s The Devil All the Time rewards the reader with an upbeat conclusion, as Alvin smites the wicked, the corrupt and the insane.

O’Conner, Crews, Morrison and Pollock each extend Poe’s Gothic sensibility to show us the frailty of our superficial, quotidian existence.  Sex and cold-blooded murder lie just beneath the surface of our lives, waiting to erupt. Turning the final page of “A Good Man Is Hard to Find” or A Feast of Snakes or Sula or The Devil All the Time, we click off the bedside light and settle into our pillows to sleep and to dream.

Tomorrow is a workday. What gruesome murder or act of mayhem will be featured in the morning newspaper or on CNN as we chomp on slaughterhouse pig bacon and unborn chicken eggs and sip our morning coffee? 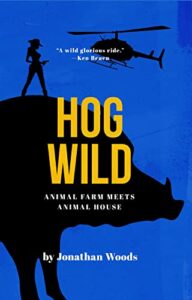 Jonathan Woods is a critically-acclaimed award-winning author of satiric pulp noir. He is the author of three novels, A Death in Mexico, Kiss the Devil Good Night, and his latest - Hog Wild(August 2022), two collections of stories, Bad Juju & Other Tales of Madness and in the anthologies Dallas Noir and Murder in Key West I & II. 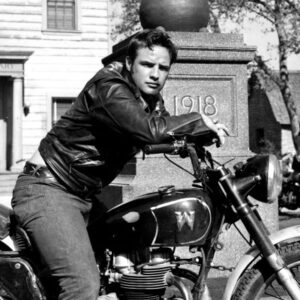 Over the past century of American culture, the motorcycle has proven troublesomely iconic. A two-wheeled symbol of the open...
© LitHub
Back to top