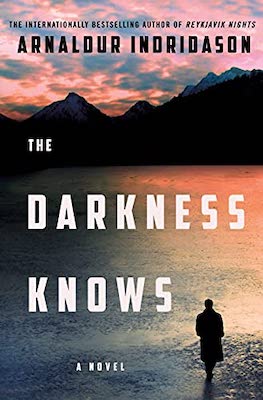 The following is an exclusive excerpt from The Darkness Knows , by Arnaldur Indridason. When a frozen man is found inside of Langjökull glacier, he appears to be a business man who disappeared three decades before. The now-retired Konrad, the police detective who had investigated the man's disappearance at the time, is called back, to solve the cold case that has plagued him for thirty years.

You couldn’t have asked for better weather. She was sitting with her tour group, admiring the view of the glacier and rummaging in her daypack for a sandwich, when her gaze happened to fall on a bump in the snow crust. It looked like a human face.

It took her a moment to register what she was seeing. Then she was on her feet, screaming her head off, shattering the silence of the ice cap.

The German tourists sitting in a huddle around her almost jumped out of their skins. They couldn’t understand what had triggered such a violent reaction in their Icelandic guide, an older woman who up to now had seemed so calm and unflappable.

They were coming to the end of their glacier tour. Yesterday they had gone for a hike on the famously unpronounceable Eyjafjallajökull. It had become a popular tourist destination following the notorious 2010 eruption, when European air traffic had been brought to a standstill by the ash cloud produced by the volcano under the ice. For a long time afterwards the surrounding landscape had been buried under a thick layer of ash, but now it had mostly blown away or been washed into the soil, and the mountainsides had reverted to a vivid moss-green.

The tour was scheduled to last ten days and take in four ice caps. They had left Reykjavík just over a week ago in specially modified vehicles. Their nights were spent at the best hotels in the south-west so that the Germans, a group of wealthy friends from the car manufacturing town of Wolfsburg, wouldn’t have to go without any of their creature comforts. Gourmet lunches on the ice caps were followed by good dinners back at their hotels in the evenings. During the day, they undertook hikes of a moderate length, with rest stops for refreshments. They had been unusually lucky with the weather: every day that September the sun had shone from a cloudless sky, and the Germans kept asking about global warming and the impact of the greenhouse effect on Iceland. The guide was fluent in German—she had studied literature at the University of Heidelberg—and the tour was conducted entirely in that language, apart from those two words in English: global warming.

She told them how the Icelandic climate had changed in recent years. The summers had become warmer with more hours of sunlight and—obligatory joke—no one was complaining. Gone were the old, unsettled summers; now you could almost rely on the good weather to last for days, even weeks at a time. The winters had become milder too, with lighter snowfall—though, on the minus side, this did nothing to diminish the gloom of the long dark nights. But the most striking change was to be seen in the glaciers, which were receding at an alarming rate. Snæfellsjökull was a good example: the ice-capped volcano, famous as the starting point for Jules Verne’s Journey to the Centre of the Earth, was a shadow of its former self.

Now they were on the last glacier of their tour, Langjökull, which had also seen better days. In 1997 to ’98, she told them, it had lost a whole three metres in height, and recently its area had shrunk by 3.5 per cent. At guide school they’d taught her to trot out figures like these, including the usual spiel about ice caps making up 11 per cent of Iceland’s surface area and containing a volume of water equivalent to twenty-five years’ precipitation.

They had spent the previous night at Húsafell and set off for the glacier at eleven this morning. It was a very easy group; they were almost all fit and equipped with top-of-the-range walking boots and protective gear. There had been no awkward incidents, no one had fallen ill or complained or made a scene, and everyone seemed set on getting the most out of their trip. Earlier they had hiked along the edge of the glacier before picking their way onto the ice itself. The compacted snow crunched at every step and the surface was covered in trickling streams. She led the way, feeling the cold air rising against her face. There was quite a bit of traffic up here. Seeing all the jeeps and snowmobiles roaring over the ice, the Germans had asked her if glacier driving was a popular sport among Icelanders and she had answered non-committally. Although she was well prepared, they often caught her out with unexpected questions, like the one at breakfast: how many cheeses do you make in Iceland?

She had enrolled at guide school after tourism really began to take off. By then she had been unemployed for eight months. On top of that she had lost her flat, as she hadn’t been able to pay off her mortgage in the wake of the financial crash, and the man she was seeing had moved to Norway. He was a builder by trade and, finding more than enough work there, had declared that he was never coming back to this shitty little island now that a bunch of idiots had managed to bankrupt it. Then someone had mentioned that tourism was the next big thing. With the bottom falling out of the króna, Iceland had suddenly become an affordable destination. At guide school, they taught her that foreign visitors loved Iceland for the landscape, the pure air and the peace and quiet.

They’d said nothing about frozen corpses on glaciers.

The Germans gathered round, following her gaze to what appeared to be a human head, emerging from the ice.

Can We Talk About Caroline Blackwood, Please? 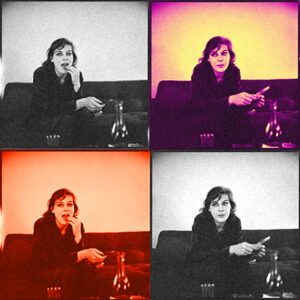