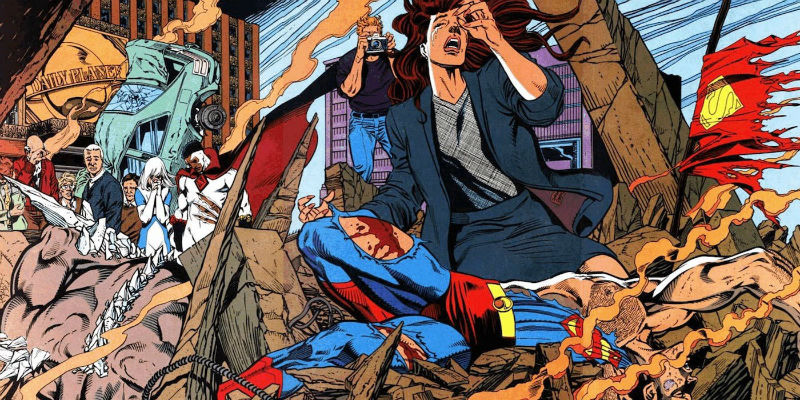 In the early 1990s, Superman was experiencing the sort of impotency that comes with age after nearly sixty years of circulation on the shelves. With his profile (and more importantly, his profits) dwindling, DC Comics decided that the famed superhero’s story-line needed a jolt to the system, something to re-captivate readers and deal a crippling blow to their archnemesis, Marvel Comics. During one brainstorm, Jerry Ordway, a writer-artist for DC, suggested, “Let’s just kill him.”

And that’s precisely what they did. Sort of.

Enter a rather motiveless but nonetheless evil alien by the name of Doomsday, who descends to Metropolis and kills Superman, the only person preventing the planet from total oblivion. After the issue sold six million copies, Superman miraculously returned in remarkably Byzantine-fashion involving even more aliens, mistaken identities, a “regeneration matrix,” and a very wicked cyborg. His return shouldn’t have come as much of a surprise. After all, he’s a superhero. So long as there are aliens falling to earth, ex-cons with vendettas, evil geniuses with malicious ambitions cloaked in a humanitarian veneer, Superman will be there to stop them. Superheroes just can’t help themselves from defeating whatever evil stands in their way, even death itself. Because death is for the rest of us, the mortals who pray for the eternal return of caped crusaders dispensing vigilante justice to the evils that incessantly attempt to penetrate the world.

The death and resurrection of Superman engendered what might be considered a comic book renaissance, one that hasn’t yet run out of steam—for example, in Captain America #25 (2007), Captain America was assassinated in only to later reappear after it was revealed he’d merely been stuck in a time loop involving, you guessed it, an ancient Inuit tribe. Ever since Superman paved the way into and out from the grave, the superhero’s death and resurrection has become an almost-ubiquitous plot-line in otherwise faltering and overstretched narrative arcs. Superheroes are practically falling from the sky like house flies (Infinity Wars, anyone?). The superhero’s death and return has reached such a critical mass that comic books themselves present a meta-commentary on the phenomenon; In DC’s Infinite Crisis (2005-2006), Batman quips to Superman, “the last time you really inspired anyone…was when you were dead.”

But what is it about superheroes that we—readers living outside of  Metropolis’ city limits—are so desperate to see resurrected time and time again that we’re willing to weave our suspension of disbelief into tantric knots in order to welcome superheroes from the dead? One answer would be that, in a world of uncertainty and complexity, we yearn for simplified categories (e.g., good and evil) that superheroes boldly represent. But how are to make sense of a world in which the binary logic the superhero embodies is questioned?

It’s a question at the center of Alan Moore’s Watchmen, a masterpiece graphic novel that challenges the prototypical superhero narrative. Having entered into precarious proximity and relation with the U.S. government, the novel’s superheroes are mysteriously hunted, framed, and killed by one of their own. Not only are the superheroes of Watchmen capable of dying a mortal’s death, but they similarly possess the all-too human capacity to mask their intentions with a strong and unyielding assertion of their good over another’s evil; for example, Adrian Veidt (the superhero-turned-business tycoon) is behind the conspiracy to kill and frame his fellow superheroes. He regards his actions as contributing to a greater good—by machinating an extra-terrestrial invasion without superheroes to stop it, he envisions a world in which nations set aside their geopolitical feuds in order to collectively combat an external threat. Diametrically opposed to Veidt, however, is the superhero Rorschach, who abides by unyielding moral axioms and seeks to uncover and foil Veidt’s plot against superheroes; standing in his way, however, is Rorschach’s fellow superhero Doctor Manhattan, who gradually comes to share in Veidt’s vision of a peaceful world without superheroes. After killing Rorschach to ensure the success of Veidt’s plan, an uncertain and troubled Doctor Manhattan is assured by the ostensible villain that he has done “the right thing.”

When superheroes die and remain dead, we are left without a moral compass. There’s no one left to make an easy distinction between good and evil. But this struggle isn’t solely the terrain of comic books and superheroes. It is also the central, yet under-appreciated, question of the crime novel. Because the genre depends heavily on hidden or subconscious motivations, transgressed norms, and the chaos lurking behind the calm of ordinary life, crime novels reveal that while the binary precept of good/evil may be enticing, it only masks a much deeper, more complicated, and far more discomfiting vision of reality that is far less easy to name, combat, or comprehend.

You can see this kind of nuance on display in some excellent crime novels, such as Attica Locke’s Bluebird, Bluebird (2017). The novel’s protagonist, Darren Matthews, a black Texas Ranger, is investigating the death of a black lawyer from Chicago and a local white woman in East Texas. Unlike a superhero, Matthews is not immune to the moral, political, economic, and societal complexities that influence and inform the very justice he is tasked with dispensing. Faced with the volatile pressures of his work, his identity, and the racial prejudices that collide between the populations of East Texas, moral clarity is hard to come by and even harder to trust. The novel grounds our conceptions of justice and authority through the figure of Matthews; far from being transcendental axioms, justice and authority are human constructions susceptible to human error.

While many superheroes seek revenge on those who exercise evil, Kinae Minato’s Penance (2017) complicates familiar and satisfying revenge narratives. After a man kills a group of girls, their surviving friends are cursed to exact revenge; evil is repaid, but only through a supernatural mandate. The novel thus lays bare questions fundamental to our understandings of vengeance. Is revenge still revenge when it is demanded by another? Or is justice itself always act of vengeful mediation between the guilty and the cursed?

Like the famed superhero-detective Batman who uncovers criminal conspiracies in Gotham City, Sara Gran’s The Infinite Blacktop (2018) presents private investigator Claire DeWitt seeking the truth behind her childhood friend’s disappearance; however, the similarities between the two end there. While Batman is motivated to uncover unequivocal truth and exact a similarly unflinching justice, DeWitt’s motivations are far less clear; she is a devout acolyte of a French detective Jacques Stillete, who writes, “Once the truth is known, the other possibilities are murdered, massacred….Life is always sweeter when the dice are still in the air.” It’s a delectable contradiction inscribed into the character of Claire DeWitt—the crime demands to be solved, but in solving it, the truth murders “other possibilities” that may be more commensurate with the world she wishes to occupy.

In a present moment in which the concept of justice is challenged daily across social media, the nightly news, and political legislation, many yearn for a parallel world in which justice is a finely tuned plot device beyond interrogation and uncomfortable debate.

None of this is to suggest that superhero narratives are somehow lesser than other genres or that superheroes and crime novels can’t cohabitate (this is where I coyly invite you to buy my book). Instead, what I mean to point to is the function these narratives serve within the culture they arise from. If we’re to accept that superheroes are projections of our continued desire to see axiomatic good triumph obvious evil, their deaths and resurrections give us hope against the evil we perceive. In a present moment in which the concept of justice is challenged daily across social media, the nightly news, and political legislation, many yearn for a parallel world in which justice is a finely tuned plot device beyond interrogation and uncomfortable debate. In a present moment in which politics largely dictate ideologies of good and evil, isn’t it awfully nice to escape into a comfortably air-conditioned theater where we’re all, if only for two hours, on the same side of the figurative aisle?

While the mythology of superheroes offer us a parallel world in which justice, good, and virtue are invincible, bullet-proof, and eternal, crime novels offer an alternative, but no less useful and necessary model of the world. In deconstructing the pervasive dichotomy of good versus evil, crime novels reveal these abstractions to be human-made constructs capable of weaponization, oppression, and revision. The allure of crime novels takes place in the shadowed recesses of morality, the gray areas between black and white, that escape nominalization or categorization—dilemmas without an answer, villains without evil intent, heroes motivated by fear.

It seems inevitable that we will continue to resurrect the superhero from the dead, just as we will continue to follow P.I.s afraid of the truths they reluctantly seek. Although these narratives represent two seemingly contradictory desires, I would argue that this contradiction reflects a symbiotic worldview that has become more relevant now than ever; it is necessary to interrogate the tidy distinctions we use to make sense of a messy world while also acknowledging that there are very real injustices that must be combatted, not by an inter-galactic superhero, but by us mortals in search for something better.

T.J. Martinson grew up just outside Chicago. He received his MA in literary studies from Eastern Illinois University and is currently working toward a Ph.D. at Indiana University Bloomington. The Reign of the Kingfisher is his debut novel. 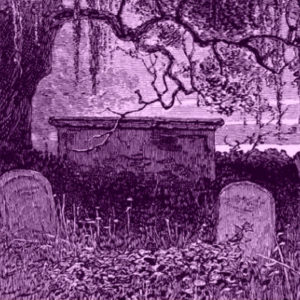 No book is written in a vacuum, and After the Eclipse isn’t any different. I’ve always loved reading crime novels that...
© LitHub
Back to top