The 1947 novel is about protecting a teenage daughter's sexual 'virtue'. The 2001 film changes that character to a gay son, and plays with how his sexuality leads to a domestic panic.

Virginia recently passed a bill that bans the use of gay and trans “panic” defenses in criminal proceedings. The panic defense argues that violence is justifiable when the victim is perceived to be gay or trans. The most egregious version of this defense happens in cases where defendants will claim that a sexual advance from the victim triggered an uncontrollable, violent response in the defendant. In cases such as these, defendants are not making a claim about their own gender or sexual identity. The assumption rests solely on the idea that minorities are the cause of their own victimization. In 1998, the two men who beat Matthew Shepherd to death employed a version of the panic defense, asking the jury to consider that they were provoked by Shepherd when he had flirted with them.

Since then, advocates have sought to ban the panic defense, arguing that it perpetuates harmful stigmas and justifies the violence that LGBTQ+ people experience, which, according to some statistics, has risen in recent years. According to Delegate Danica Roem, who introduced the bill, “you can’t say, ‘That person being gay is the reason I assaulted or killed them, or the reason why my sentence should be reduced.” In July, when the bill comes into effect, Virginia will be the twelfth state, including the District of Columbia, to ban the use of the panic defense. Similar bills are currently being considered in a dozen other states, as well as by both the US House of Representatives and Senate.

The drama of the panic defense suggests that, when confronted by an assumed threat to the normal operation of things, one is left with no other recourse than violence.

As a legal strategy, the “panic” defense conjures a familiar pathology. Except, the strategy rests on the assumption that queerness causes a pathological response in otherwise “normal” people. To be in contact with a queer person is, according to the defense, to be at risk of devolving into madness and murder. The drama of the panic defense suggests that, when confronted by an assumed threat to the normal operation of things, one is left with no other recourse than violence. Gay panic not only reinforces and promotes negative stereotypes, but it also reveals the structural relationship between marginalized persons and violence in our cultural narratives. This dynamic is especially evident in the case of the “bury your gays” trope, where queer characters in fiction and film are promptly, if not ritually, killed off. In crime narratives and thrillers, the “bury your gays” trope speaks to a belief that queerness contributes to the spread of violence. For the sake of closure, whether in the form of judicial punishment or narrative resolution, queerness must be consigned to the grave.

With increased visibility for LGBTQ+ people has come an increased pressure on cultural objects to abandon the tropes and narratives that perpetuate harmful ideas about, if not outright violence against, LGBTQ+ people. Any queer person can attest to that familiar sense of dread when watching a television show or film featuring a queer character. That dread says, “Well, it’s only a matter of time before this character dies.” Gay panic, now understood as the panic we feel for queer people, suggests that queerness itself might be a form of suspense. We wait, anticipating the harm or violence to come. Gay panic is our awareness that something lurks beneath the surface, waiting to disrupt the placid waters of our everyday calm. Less a threat than a catalyst, queerness is thus not unlike the inciting incident upon which narrative suspense is generated in crime dramas and thrillers.

Article continues after advertisement
Gay panic, now understood as the panic we feel for queer people, suggests that queerness itself might be a form of suspense.

In the 2001 film The Deep End, Tilda Swinton stars as Margaret Hall. The film is considered one of Swinton’s breakout film roles, with Swinton playing a devoted mother who tends her family while her husband serves as a captain on an aircraft carrier. Margaret is the picture-perfect angel in a gorgeous, wood-panelled house in the scenic Lake Tahoe Village. She shepherds her children to school, lessons, and sports. She cares for an elderly father-in-law and quietly manages the family’s finances. She keeps herself fit by swimming and running. Her capacity for virtue, as a mother and as a wife, is equal to her capacity for self-diminishment, which is most evident when she dumps a body in the waters of Lake Tahoe to protect her life and children.

Margaret’s good fortune is threatened when her teenaged son Beau (Jonathan Tucker) starts running around with Darby Reece, played by the hunky Josh Lucas. Darby owns a seedy gay nightclub named “The Deep End” in nearby Reno, Nevada. In what is the first of many entanglements, the film opens with Margaret visiting Darby’s nightclub to demand that he stop seeing her son. He agrees, only to show up later that night in a flashy blue Corvette. Darby woos Beau out from his childhood room. Beau confronts Darby, demanding to know why he would agree to Margaret’s demands to stop seeing him. Darby prevaricates; she agreed to pay him, after all. Darby and Beau fight, and Beau storms off. After Beau has left, Darby dies in an unfortunate accident when he falls off the boat dock and is impaled on an anchor. The next morning, after she discovers Darby’s body, Margaret dutifully snaps into action. She dumps his body (tied to the anchor) in a quiet cove, but the crystal-clear water of Lake Tahoe barely conceals Reece’s corpse. From above, she can look down at him in the water, and, throughout, the film emphasizes this thin transparency that separates secrets from their revelation. While the film straddles the line between melodrama and indie, it deploys the visual vocabulary of the thriller—the discovery of a body, the frantic attempt to bury evidence, and the many, many close calls—in order to accentuate the precariousness of Margaret’s domestic bliss.

While the film straddles the line between melodrama and indie, it deploys the visual vocabulary of the thriller

After Darby Reece’s body is discovered by the police, Margaret is approached by Alek Spera (Goran Višnjić), a man whom Reece owes money. He presents her with a VHS copy of a sex tape of Reece and Beau, and blackmails her for $50 thousand. Alek is dark and arrogant, but he is a redeemable villain, as evidenced when he saves Margaret’s father-in-law during a heart attack. When Margaret is unable to collect the demanded payment, Alek warns her that it is his partner Nagle (Raymond Barry) whom she should fear. In the end, Alek kills Nagle to protect Margaret. “Whatever happened,” Alek tells her, “it’s too late. You have your family to think about.” Alek’s conversion suggests that the mythos of the American family is a redemptive ideology, one which is capable of rewriting the hearts and minds of the criminal underclass. In the final scene, Margaret kneels over Alek’s body after he has driven his car, with Nagle’s body, off the road. He instructs her to take the VHS and the money. She leans over his body, and, in a close-up shot, their lips graze one another. The erotic charge of Alek’s sacrifice and Margaret’s redemption suggests a relation between the consummation of heterosexuality and the warding of the family against the threatening force of queer desire.

The Deep End is based on the 1947 novel The Blank Wall by Elizabeth Sanxay Holding, but it revises the original by changing the gender of the child for whom the mother risks everything to protect. This change is not incidental. The original is a testament to post-war anxiety around feminine purity and the mythology of the American family. In order to reproduce that mythology, daughters must be protected from a seedy world of sex and violence. According to one critic, the novel is evidence of Sanxay Holding’s “profound disillusionment with the condition of women, and with the values and gender roles extolled by American society in the 1940s.” Like the original, the film adaptation dramatizes the precariousness of these values and gender roles. But in The Deep End, which was written and directed by partners David Siegel and Scott McGehee, that which threatens the family is closer to home. Beau’s sexuality is the disruptive force, a secret that nonetheless hides in plain sight (“She knows,” Reece tells Beau. “She’s a mother.”) In The Deep End, gay panic propels the film forward, pushing mother and family “off the deep end.”

Article continues after advertisement
Like the original, the film adaptation dramatizes the precariousness of these values and gender roles.

I first watched The Deep End when I was fourteen. I was immediately taken in by—as any young, queer kid might be—the scene where Alek plays for Margaret the sex tape between Darby and Beau. Sensing in that scene the illicit force of queer desire, I found myself absorbed in the sexiness of something that was also panic-inducing. When I rewatched the film recently, I was struck by how little of the film is given over to this explicit representation of queerness’s erotic thrust. It’s a long, slow-paced film, one which pushes the conventions of the thriller to their most understated limits. It seemed that no sooner did the film open the lid on gay sex than it panicked. This is not to say that the film itself was phobic toward the representation of queer desire. Rather, desire is too demanding, too forceful, and it risks suspending completely the film’s progressive momentum (as it did in my memory). Instead, the film sublimates that energy toward narrative suspense, imbuing the watching of the film with the thriller’s familiar affective charge. The panicked thrill of discovery that Margaret feels as she covers up the evidence of her crimes—we also feel that. There is therefore an analogous relationship between narrative suspense in the thriller and the suspense I remember feeling when I first witnessed the sexy consummation of queer intimacy in the film.

Gay panic is, of course, the absurd price we pay for the magnification of the family in the American imagination. Throughout the film, Beau reminds Margaret about his open application to Wesleyan and the possibility of a music scholarship. Beau’s dalliance with Darby threatens that promise, the promise that he might one day grow up to reproduce the image of perfection that Margaret suffers to maintain. In the final scene, Margaret asks Beau for help chasing after Alek, before she has discovered the accident. In order to preserve her family’s security, Margaret must first make Alek a co-conspirator in her crimes.

What remains unstated by The Deep End is how this tenuous security will survive the film’s resolution. Both melodrama and the thriller depend upon a return to normality, where the highs and lows of narrative stimulation are finally discharged and given release. The film must pack up suspense and, with it, the erotics of queer desire. At the same time, the film ends with a phone call from Beau’s father, the absent Captain Thomas Hall. This gives a possible window of return for gay panic, sunk temporarily beneath the clear waters of the family’s assumed normality. What’s more, the film implies that when secrets are finally dredged up, it will be queer and marginalized people who suffer the most for it.

Matthew John Phillips is a writer and editor from Philadelphia, PA. He tweets at @mjphillips and his newsletter "Open + Worlds" can be found at matthewjohnphillips.substack.com. 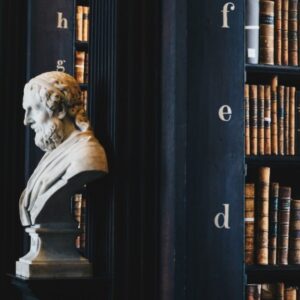 I’ve got a secret, one I’ve never been willing to reveal in my twenty plus years as a librarian. I hate to burst the readers’...
© LitHub
Back to top