The Department of Sensitive Crimes 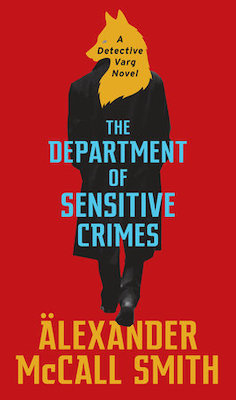 The following is an exclusive excerpt from The Department of Sensitive Crimes, the first in a new “Scandi-blanc” series from Alexander McCall Smith, which features Ulf Varg, a detective in a law enforcement department that investigates unusual crimes in Malmo, Sweden, including the case of a man stabbed in the back of the knee, the disappearance of a woman’s imaginary boyfriend, and a purported werewolf threatening business at a resort.

The case that Ulf had mentioned to Dr. Svensson at the end of his last therapy session had started, as many of the department’s cases did, with a simple report from the local police. Their resources were strained, and if anything happened that looked as if it might require complicated investigation, they referred it to the Department of Sensitive Crimes. These cases could go to the normal Criminal Investigation Authority, but the local police enjoyed a close relationship with the authority and tried to avoid burdening them excessively. The fact that these referrals were often made rather hastily inevitably meant that some of the issues with which Ulf’s department was landed were not all that sensitive, but by and large the system worked. Only occasionally did they have to protest that the routine disappearance of a teenager, or the theft of a laptop computer, was not really the sort of issue for which they had been set up.

The report that came in one morning stated simply: “Market stabbing. No severe injury, but unusual locus. No witnesses, and the victim himself saw nothing. Please investigate.”

Ulf read the report out to Anna. “Unusual locus? What does that mean?”

Anna laughed. “Hardly the latter, surely. No, I think it’s probably a stabbing that took place in the back of a puppet theatre, or under a table laden with peace movement literature—the anti-war people have a stall down there most days. Something of that sort.”

Ulf sighed. “I suppose we’d better go and ask around. The local police say somebody will be there to fill us in with such information as they have. I don’t think that’ll be much—no witnesses, they say.”

Anna closed her laptop and reached for her handbag. “I was hoping to do some shopping anyway,” she said. “Count me in on this one. I need to buy broccoli. And free-range eggs.”

They travelled to the market in Ulf’s ancient light grey Saab. It had once been silver in colour, the pride of Ulf’s uncle from Gothenburg, but it had faded with age. “It’s the Kattegatt air,” the uncle explained. “Salinity is bad for certain paints, and I think silver is especially vulnerable. But inside, Ulf, the car is perfect. Real leather. Everything works. Everything.”

The uncle’s eyesight had deteriorated, and he had reluctantly given up driving. “It’ll give me great pleasure to know you’re looking after it, Ulf. And I hope it gives you as much pleasure as it’s given me.”

It did. Ulf loved the car, and on occasion, when feeling low for whatever reason, he would take it for a drive—not to anywhere in particular, but simply to be out on the road, comforted by the smell of the old leather upholstery and surrounded by the sounds of a perfectly functioning mechanical creation: the tick of the clock on the dashboard, the smooth hum of the engine, the well lubricated munching sound that accompanied the changing of gear. Inevitably, he returned from such outings feeling vastly better, making him wonder whether the money he spent on his sessions with Dr. Svensson would not be better expended on fuel for more aimless, but clearly therapeutic, journeys in the Saab.

Anna, too, enjoyed travelling in Ulf’s car, and as they drove the short distance to the old market she sat back, closed her eyes, and caressed the cracked leather of the seat. “The best part of any investigation with you, Ulf,” she said dreamily, “is being in your car.”

The report that came in one morning stated simply: “Market stabbing. No severe injury, but unusual locus. No witnesses, and the victim himself saw nothing. Please investigate.”

“You know what I mean? Being in your car is like being in the old Sweden.”

Anna grinned. “Something like that. A return to a time of innocence. Everybody wants that, don’t they?”

Ulf said that he thought some did. They could be misunderstood, though: nostalgia and reactionary sentiment could come perilously close.

The conversation drifted. Anna told Ulf about a row at her daughters’ school. A strident parent had accused one of the teachers of making her child feel undervalued. “The truth of the matter, though, is that the child in question is actually a bit of a dead loss. I don’t mean to be unkind, but it would be hard to undervalue that kid.”

“I suppose so,” said Anna. “I suppose teachers have to pretend that every child is some sort of genius.”

“Especially when talking to the parent.”

“Perhaps it’s for the best,” mused Anna. “Perhaps if we pretend hard enough about these things, we’ll end up believing the things they want us to believe, and everybody will be happy.”

“Nirvana,” said Ulf. “We could change Sweden’s name to Nirvana—officially.”

The conversation switched again—this time to an internal office memo that had everybody up in arms—and then they were
there, arriving at the edge of the sprawling market. Anna got out to guide Ulf into a tight parking spot, and then the two of them made their way towards the place where they had arranged to meet the local policeman who had first investigated the stabbing.

He was called Blomquist, and Ulf and Anna had worked with him once before, on an investigation into fake whisky that had
briefly appeared in the market a year or two earlier. Blomquist remembered them, and greeted them warmly at the top of one of the lanes along which the market stalls were pitched.

“I remember that whisky business,” he said. “That was strange, but this one!” He whistled. “This is a real puzzler.”

Blomquist nodded. “Oh, I know that you people have a reputation for sorting these things out, but I think this one is going to
test you.”

Anna glanced at Ulf. “We’ll see,” she said, assuming a businesslike manner. “Tell us what you know.”

Blomquist pointed to a stall farther down the lane. “You see that stall over there? The one where that man is showing that
woman a scarf?”

Ulf looked in the direction Blomquist was pointing. A stout man in a leather jacket was concluding the sale of a scarf to a
young woman in jeans and a vivid red top.

“That’ll be cashmere,” said Anna. “I know those people.”

“That’s the brother of the victim,” said Blomquist. “He’s looking after the business while his brother is in hospital. We can go and talk to him, if you like. You’ll see where it happened.”

“How long will this man be in hospital?” asked Anna.

Blomquist made a dismissive gesture. “Only a day or two, I think. It’s not a serious injury, but it’s in a difficult place apparently.

The back of the knee. Apparently, there are all sorts of cables that run down there …”

“I think you mean tendons,” said Ulf. “We have tendons at the back of our knees.” He paused. “And I think in the front as well.
Or certainly the sides.”

“Sport is for enjoyment,” said Blomquist. “And the wonderful thing about tennis is that you can enjoy it even if you aren’t very
good.”

“As long as your opponent is roughly the same standard,” Ulf cautioned. “If you’re up against a power serve and you aren’t much good, the game gets pretty one-sided.”

“Oscar Gustafsson,” replied Blomquist. “And his brother, the victim, is Malte. Malte Gustafsson.”

From THE DEPARTMENT OF SENSITIVE CRIMES. Used with the permission of the publisher, Pantheon. Copyright © 2019 by Alexander McCall Smith. 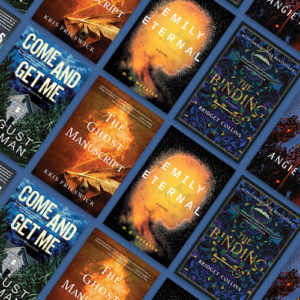 April's Best Debut Thrillers and Crime Novels Breaking into the crime game isn’t easy, but every month, a few brave and talented souls make a go of it. For readers,...
© LitHub
Back to top