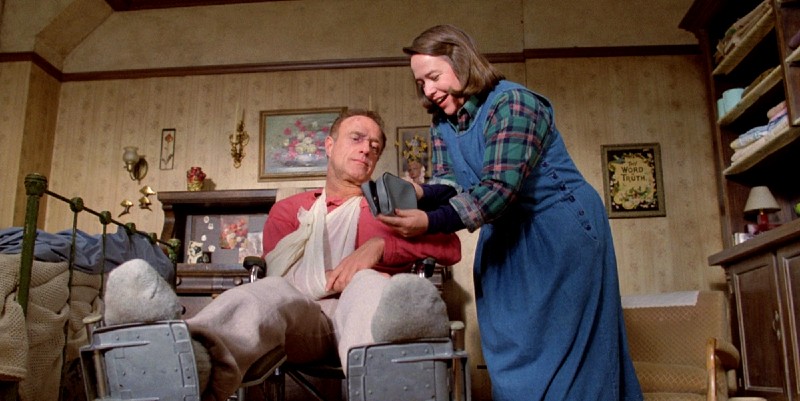 The Depths of Stephen King’s Misery

Misery doesn't play with the supernatural, but it may just be King's best, most profound, and most spiritual story.

But for me, Misery—especially in the form of its outstanding William Goldman film adaptation—is his greatest story of all.

With Misery, Stephen King plays the game straight up with no chaser. There are no ghosts, no telepathic children, no Randall Flagg on his evil way to town.

In Misery, there are only two very real seeming people who are pitted against each other. In one corner, there is a romance writer named Paul Sheldon, and in the other is a nurse named Annie Wilkes who is his murderous and unstable number one fan.

In all of cinema, it is very difficult to find more delightful psychological tension than in the beginning when Paul wakes up from the crash to find himself bedridden in Annie’s house.

Because at first, Paul believes her story that the snowstorm has knocked out the phones and has prevented her from taking him to the hospital.

This plausible lie makes Paul initially genuinely grateful and therefore happy to play at being the famous brilliant author for his slightly kooky yet undeniably heroic lifesaver of a number one fan.

Soon, though, Paul realizes that something is not right. Yet he can’t let on. Being under the power of a dangerous seeming loon, Paul is savvy enough to know that saying something like “Let me go, you nut!” will only bring down who-the-hell-knows-what upon him.

In these scenes what is said plays in direct contrast to what is known by the expressions within each character’s eyes.

Suddenly, the simple exchange of banalities transforms into what it really is and has been from the beginning: a deadly game of cat and mouse.

But even this dramatic brilliance is only an appetizer to the reason why this story resounds and will continue to resound as an all-time classic.

Physically broken and stuck in the fell clutches of his unstable lunatic number one fan, Paul Sheldon first believes that he has one advantage. Annie, at unpredictable times, truly does seem to adore him.

Taking advantage of this fangirl fantasy, Paul works his natural charms in a delightfully cringy offer of a date night between them where he plans to drug her and to escape.

But an errant clumsy move by Annie spoils these plans.

After this, stuck even deeper into Annie’s pit of horror, Paul thinks that he’s done for.

But he soon realizes he has one more incredible ace up his sleeve after all.

Annie actually alludes to Paul’s real advantage in their battle in the beginning when she says, “I love you, Paul. Your mind, I mean.”

And it is only in tapping into this imagination and writing the best Misery novel ever that Paul has any hope of escaping.

It is here at this point in the story where the story expands from a mere brilliant display of psychological suspense into something more profound.

From the very beginnings of our Western culture, the mysterious human imagination has always been associated with love.

The Ancient Greeks actually personified the imagination as a loving female goddess known as the Muse.

“Sing in me, Muse, and through me tell the story of that man…” goes the famous first line of Homer’s The Odyssey.

And it is to this same loving Muse that Paul Sheldon finally comes, battered and broken, to make his appeal for help in order to find his way out of his situation.

The Greeks weren’t the only ones who associated the imagination with love and divinity.

St. Thomas Aquinas and the luminary genius, William Blake, both saw the human imagination as a divine form of Christian love.

When viewed from this perspective, the deep profundity of Misery becomes suddenly apparent in the following way.

Before the beginning of the story, we come to learn that Paul was a famous romance writer.

Or in other words, one could say he had love in his life.

But as the story begins, we see that Paul, like the Prodigal Son in Jesus’s parable, has turned his back on this love in his life to write a more worldly vulgar novel about foul-mouthed slum kids.

The allusion by Paul that he himself was a slum kid points to the fact that his new work (that Annie ends up making him burn in one of the film’s most powerful scenes) is a childish regressive egotistical artistic misstep backwards rather than forwards for Paul.

When Annie says, “It lacks nobility, Paul,” she actually has a point.

Annie—whose evil blackened soul’s one tiny light was Paul’s romantic creations—is from her perspective rightly horrified to find that Paul, the keeper of her dark life’s one lighthouse, has not only decided to quit this loving task but has killed off the series!

Seen in this way, crazy Annie symbolizes the true error of Paul’s decision when he, like the Prodigal Son, flees from a life filled with love. For where does the Prodigal Son in the parable also find himself when he departs from love? Wallowing among the pigs!

That is why, cast down among the pigs like the Prodigal Son, Paul, too, must decide to turn away from the error of his ways and head back home to give the love he ran away from another shot by writing the best romantic Misery novel of all.

In doing so, Paul comes to fully learn the truism that it is love that lies at the core of creative art.

For it is only when Paul comes into true communion with his captor, only when he puts aside his fear and hatred of Annie and sees her as a person that he must selflessly serve to please and to delight that he comes to find the hidden secret of love, that it unlocks and unleashes true human power.

In essence, in order for Paul to escape, he must erase his ego. He must in a sense forgive Annie, at least temporarily, and compassionately put himself in Annie’s shoes. He must at least for a moment commit to Jesus’s most difficult call for human beings to “turn the other cheek.”

For only by ignoring his bodily suffering and unjust treatment to bask in the shining light of his compassionate loving imagination can Paul come up with the real magic talisman that slays the dragon.

When this happens, Annie cannot resist Paul’s genuinely selfless service to her and so lets her guard down just enough for Paul to finally get the upper hand and to escape.

Even the story within a story that Paul must write for Annie shows the profound theme.

For like Paul, Misery, too, is resurrected both the series and the title character.

The proof of Paul’s higher transformative triumph through love can also be gleaned at the end of the story when we find Paul back in New York eighteen months later with his agent heralding the release of his newest work.

What is this higher education?

At the beginning, Paul thought love was a cheap childish annoying joke.

In response to this, he decided to write something egotistical and vulgar and low rent.

But as both Annie and the story show, this was the wrong move.

Like Goldilocks, he first sees flowery romance writing that he himself doesn’t enjoy as the too hot porridge of Thou Shalt obligation and total selflessness.

In response to this with his slum kid vulgar novel, he has opted again wrongly for what is too selfish and cold.

On the contrary, it is those who realize that one has the power to actively adjust these two halves of the self to meet the circumstances of the changing world around them who come into contact with wisdom.

In the end, Paul Sheldon’s true higher education and growth is seen when he doesn’t even care that he has finally gotten the attention of critics.

He has risen above both annoying obligation and cold selfishness. He is the master now of both worlds.

When we view the ending in this way, another biblical story—the story of St. Paul—is clearly paralleled in Paul Sheldon’s ordeal.

St. Paul also is on the wrong road (of violently persecuting Christians) when he suffers a devastating injury (incurred when he is introduced to his savior, Jesus.)

Like Paul Sheldon, his namesake, St. Paul, also is bedridden for a time after coming into contact with God who is love.

Once the knowledge of true love slowly takes full hold, as in Paul Sheldon’s case, the scales of the Saint’s folly fall from his eyes and he, too, is transformed.

The profound point of Misery can even be seen in its almost ironic title.

That with love—in this case the love that powers creative art—even the depths of true human misery can be transformed. 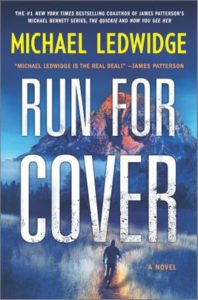 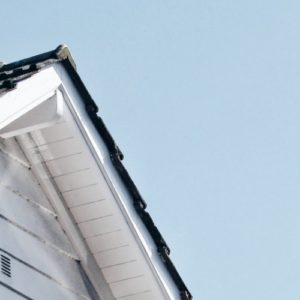 When I was in college, I lived in a house with five other girls. Next door to us lived six more boys. Behind us lived my roommate’s...
© LitHub
Back to top