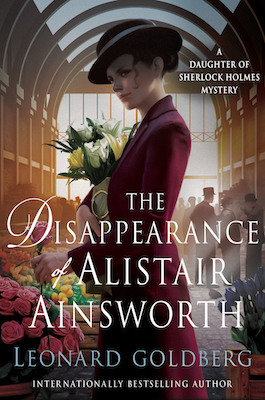 The following is an exclusive excerpt from The Disappearance of Alistair Ainsworth, the latest in Leonard Goldberg’s “Daughter of Sherlock Holmes Mysteries.” Sherlock fans and classic mystery lovers alike will delight in its protagonist, Joanna, and the Watsons, who are residents of 221b Baker Street.

We did not make good time, for traffic was heavy and sections of the streets remained flooded with last evening’s torrential downpour. Nevertheless, Joanna used my father’s walking stick to repeatedly rap on the roof of our carriage, urging the driver to go faster and faster.

“Perhaps the Germans did not read the morning newspaper,” I hoped.

“I can assure you they have,” Joanna said. “They will scour over every page, searching for information about the missing man and whether there is any mention of an ongoing investigation. You see, the Germans are aware they have a valued prize on their hands and will wish to know if there are any clues indicating the authorities are closing in on them.”

“But it is unlikely such information would find its way into the newspapers,” I argued.

“To the contrary, Scotland Yard takes great delight in publicizing their pursuits and accomplishments, real or imagined. They do this to project an image of sharpness that is all too often lacking.”

My father nodded at Joanna’s assessment. “Holmes would tell you that, with few exceptions, they are a collection of bunglers who depend on informants to solve most of their cases. It is not that they don’t have brains; it is that they refuse to use them.”

“Then our last, best hope is that Verner read the morning papers and, realizing the danger, has fled,” I said.

“That is wishful thinking,” said Joanna. “Had Verner read the notice, he would have certainly called to inform us of the new information and to seek further instructions.”

My father sighed dispiritedly. “Everything seems to be going against poor Verner.”

“Let us pray we are not too late,” said Joanna.

But it appeared we were. Stationed at the doorstep to Verner’s practice were two police constables. Because of our past association with Scotland Yard, we were recognized and allowed immediate entrance. Expecting the worst, we hurried into Verner’s surgery but found only Inspector Lestrade standing amidst evidence that indicated a struggle had taken place. A metal stool and instrument table were overturned, with scalpels and forceps strewn about the floor. Off to the side was a medicine cabinet, with its glass door shattered and blood smeared across its handle. The strong odor of chloroform filled the air.

Our presence seemed to catch Lestrade by surprise. He tipped his hat to us and, skipping the usual amenities, asked, “Are you friends with Dr. Verner?”

“He is a former colleague who bought my practice some years ago,” my father replied.

“I take it this is not a social call.”

“May I then inquire as to the purpose of your visit this morning?”

“We hoped to prevent harm from coming to Verner.”

“And pray tell, how did you know this harm might occur?”

“Because my daughter-in-law predicted it.”

Lestrade gave us a long quizzical look. “How did she arrive at this conclusion?”

“From a meeting we had with Verner late last night.”

“Might I know the reason for this late-night meeting?”

“Perhaps the most unusual tale you will ever hear,” my father responded. “Please allow my daughter-in-law to describe the frightful journey Verner was compelled to take.”

“Compelled, you say?” Lestrade asked at once.

“Persuaded may be a better word,” Joanna said, and began a detailed narrative, often using Verner’s own words to describe the major features.

Lestrade listened intently, but his interest was obviously piqued by the mention of a carriage, with its windows covered, that traveled a most circuitous route. He tapped a finger against his chin before asking, “The doctor had no idea of his destination?”

“None whatsoever,” Joanna replied. “He was told the patient was a personage of high standing whose identity and location were not to be disclosed under any circumstances.”

“Stranger yet was the fact that the patient was supposedly a mute who could only converse with chalk and blackboard, since Verner was not familiar with sign language. I will not go into detail at this point, but suffice it to say Verner was under the distinct impression that the patient was feigning his symptoms of abdominal discomfort.”

“Why would the patient conjure up such an illness?”

Lestrade’s eyes widened. “Was Dr. Verner convinced of this?”

“Beyond any doubt, for Verner repeated the question and once more the patient wrote the word HELP. In that a secret method of communication was now established, Verner inquired as to the patient’s name. The supposed mute was only able to spell the letters TU before he was compelled to stop because his captor had become suspicious and moved in for a closer look. Verner quick-wittedly made the diagnosis of acute inflammation of the gallbladder and advised immediate hospitalization in an effort to remove the patient from his captivity. But the captors refused to follow the advice and only asked for pain medication before sending Verner on his way.”

Lestrade shook his head in wonderment. “In all my years I have never heard such a tale.”

“When asked if the pain moved about, the patient surreptitiously guided the doctor’s hand and spelled out the word HELP on his abdomen.”

“Nor I,” Joanna said. “And now allow me to explain why we feel Dr. Verner is in such danger. After departing the patient’s house, he was driven some twenty minutes away and unceremoniously let out in the midst of a storm, with a most menacing warning not to mention the patient or his illness to anyone. He was told the consequences of such action would be very unpleasant for all involved. We of course advised Verner to follow those instructions while we devised a plan of action.”

“I take it he did not and this is the reason for your alarm.”

“Oh, but he did. Unfortunately his captors thought otherwise. You see, in the morning newspaper, there was a notice offering a reward for information on the whereabouts of Alistair Ainsworth who also responds to the name Tubby. Thus it seems clear that our supposedly mute patient was attempting to spell out his nickname.”

Lestrade’s jaw dropped. In an instant he dashed to the door of the surgery and closed it securely. When he rejoined us, he spoke in a voice so low it resembled a whisper. “Have you spoken to anyone of this?”

“Only you,” Joanna replied.

“See that it stays that way,” Lestrade said. “For you have entered dangerous waters.”

Lestrade held up his hand. “At this point, you must allow me to ask the questions, with you supplying the most detailed of answers. It is the location of the house the doctor visited that is of obvious importance. Although the windows of his carriage were covered, did he give you any information on the neighborhood they eventually reached?”

“Only that it was residential and of the upper class. It was quite dark, but he could discern the house was two storied and well built.”

“Unremarkable, except there were indications the home was rented.”

“A number of features, which included a lack of furniture and no mirrors or paintings on the walls. In addition, there was unopened mail stacked up on a table in the foyer. Obviously the captors had little interest in the mail. Long-term occupants would, short-term renters would not.”

“Did Dr. Verner give a description of these captors?”

Joanna thought for a moment before saying, “He came in contact with only one. The man was tall and broad shouldered, with close-cut blond hair and a noticeable facial tic.”

“Neutral, but he was in all likelihood a German.”

“Based on his physical characteristics?”

“Based on his use of the word FENSTER,” Joanna said, and explained its German meaning and the context in which the term window was used. “There is no doubt that German was his native tongue.”

An expression of deep concern came to Lestrade’s face and this was attested to by the gravity of his next words. “We must locate this house at all costs. There is not a moment to lose.” “Unfortunately we have so little to go on,” my father said unhappily. “There are dozens of upper-class residential neighborhoods in London, all of which have well-built houses too
numerous to count.”

“But the house was in all likelihood leased,” Lestrade noted. “Perhaps we could narrow down our search somewhat by inquiring about recent rentals from leasing agents.”

“That would take far too long,” Joanna pointed out. “Moreover, we do not know if the house was in fact let by an agent and, if it was, how long ago the transaction took place.” “The owner could have simply posted a to-let advertisement in various bulletins or newspapers,” I added.

Lestrade sighed resignedly. “I am open to any other courses of action we might pursue.”

“There is one that may prove worthwhile,” Joanna said, and motioned to a small broken bottle on the floor next to the bloodstained cabinet. “You will note the strong odor of chloroform that emanates from that broken vial. A fierce struggle took place here during which the cabinet door was smashed and a small bottle of chloroform fell to the tile floor and shattered. Dr. Verner and his captors may have stepped upon the damp areas of chloroform and thus they carry its scent on the soles and heels of their shoes.”

“It can be followed.”

“By a hound named Toby Two who has the keenest nose in all London.”

“Where do we find this hound?”

“At number three Pinchin Lane in the lower quarter of Lambeth,” Joanna replied by memory. “Tell the kennel owner that only Toby Two will do and that the request is made by Dr. Watson, the longtime associate of Sherlock Holmes.”

“Are you convinced the dog can perform such a feat?”

Joanna nodded firmly. “She once tracked the faint odor of French perfume from Victoria Station to the northern reaches of Edgware Road without missing a beat.”

Lestrade raced for the door. “I must call Lieutenant Dunn and request that he join us at once.”

“From Naval Intelligence?” I asked. “Is he the same officer who was a member of our team that solved the case of A Study in Treason?”

“So we are dealing here with espionage.”

“I can say no more,” Lestrade said. “Now I must ask that you remain in this room and speak to no one until Lieutenant Dunn arrives. A constable will be posted at the door to make certain no unauthorized person can enter this surgery.”

“Please instruct the lieutenant to make haste, for we are faced with a most urgent matter,” Joanna implored. “Dr. Ver- ner’s life is very much at stake here.”

“As is the fate of all England,” Lestrade said darkly, and closed the door behind him.

From THE DISAPPEARANCE OF ALISTAIR AINSWORTH. Used with the permission of the publisher, Minotaur. Copyright © 2095 by Leonard Goldberg. 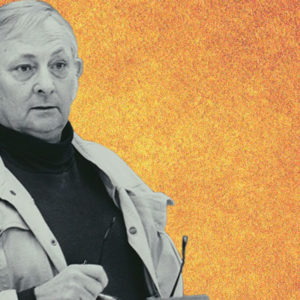