50 Years Later, a Spy Novelist's Death Is Still a Mystery

They sailed from Gibraltar on the morning of October 8, 1964. The couple’s destination: the Canary Islands, just over 850 miles away, a reasonable journey for the Visa, the ketch that had doubled as home for the past year. The 25-tonne yacht was half a century old, in excellent shape and painted gleaming white after $20,000-worth of renovations. There was no reason for the couple to believe their journey would end in disaster.

The couple’s life was glamorous and charmed. They had met in Geneva at the end of the 1950s, while she was visiting from elsewhere in Europe, most likely Paris. Josef said he worked for the International Labor Organization. Holly was a writer, with half a dozen published novels to her name. His passport was Swiss, though he was born and raised in Prague. She was American, Chicago-born, raised in deep Brooklyn with later stints in London, but she always called Manhattan home even when she wasn’t there in the flesh.

They had married four years earlier. He was her second husband, after the first died long ago in a train accident. The twelve-year difference between Holly and Josef raised some eyebrows, but they hardly cared, and those they encountered in Paris and Malaga followed their lead. It mattered even less aboard the Visa where it was just the two of them, she writing the next novel, he working on some project or another. “We keep trying to cross the ocean,” Holly wrote her editor at the end of 1963. “One thing or another stops us, but we remain happy enough.”

But waters between them were not quite calm. She wrote her younger brother, Frank, on March 30th that she was worried about her husband. She wanted to return to New York, but he faced increasing scrutiny from the government, and added difficulty crossing into the United States. She told her brother that the CIA had a file on her husband. That they were “blackballing” him.

Now, all these months later, the couple set sail. Early in the morning on October 11th, not quite halfway through their journey, they were 20 miles north of the Moroccan town of Safi. He was below deck, making coffee. She stood watch up above. Perhaps when the coffee finished brewing, they would switch, he going above ground, she moving below.

He never got a chance to find out. At about four am, a shock so strong it knocked him against the wall. He raced upstairs. He saw a gray-colored ship about 145 feet long moving away.

He called for his wife. She didn’t respond.

Then Josef Franta peered down into the water.

A few years ago I was tipped off to the work of Holly Roth when I wondered about the paucity of female espionage novelists, a state of affairs that, maddeningly, still persists today. I’d just published an essay on Helen MacInnes, whose blend of romance and suspense made her a perennial bestseller for much of her four-decade career, and lamented that she didn’t seem to have many female spy fiction counterparts. I wanted to know why, and whom I was missing out on reading.

The tip about Roth paid off quickly. I started with her first published novel, The Content Assignment (1954) and found it a superior thriller. It wasn’t flashy, the terse prose style hardly called attention to itself, but the intrigue was first-rate and the story kept me turning the pages. In quick succession I found and read subsequent thrillers—The Mask of Glass (1954), The Sleeper (1955), The Crimson and the Purple (1956), and Shadow of a Lady (1957)—and enjoyed them all.

What most impressed me about Roth was her economy of suspense, even at a time when that was the fashion—partly because of space constraints and printing costs. She moved things along in a sentence when other writers needed a paragraph, or worse, a page. (A harried superintendent in Shadow of a Lady: “Write up the report so it’ll look as if we’re doing something.”) She conveyed a clear and deep knowledge of various foreign countries without ever going overboard. Her sense of place was relaxed when narrative tension was at its highest pitch. (London, in The Content Assignment, is where pronunciations are “arbitrary and quite confusing, but the New Yorkers’ plaintive criticisms of them seemed less justified.”)

Roth dropped sly observations about people, too. “When a boy is eighteen he often has a puppy quality that older people find endearing,” remarks Jimmy Kennemore, the former Army agent whose life and face are about to alter drastically in The Mask of Glass. “That may be okay…but by the time he is in his twenties and out of college he should be able to proceed about the business of being a man. I could not.”

Her book editor at Harcourt Brace, Julian Muller, told the New York Times that Roth “had a great love of literature and letters, and her speech and writing reflected it. She was a person of broad interests and highly articulate.” Muller’s estimation of Roth was apparent in her occasional correspondence with Ellery Queen Mystery Magazine founding editor Fred Dannay, which lived up to Muller’s additional judgment that she was “kindly imaginative.”

She complained, cheerfully, about her agent getting in the way of the author-editor relationship, batted around changes to her stories, and recalled her work with Mystery Writers of America, where she served as secretary during the 1950s, with particular fondness. In one of her last letters to Dannay, on January 23, 1964, Roth wryly notes it is “one of my verbose days” and proceeds to recount a conversation between herself and fellow mystery writer Stanley Ellin on “the subjects of the accents (mine) and fractions (his) that our typewriters boasted” (along with a wistful memory of dining with Ellin and his wife at Ruby Foo’s.)

No wonder two of the greatest crime writers and critics—Dorothy B. Hughes and Francis Iles— were particularly keen on Roth’s work and reviewed them favorably at a regular clip. (Iles, who by the 1950s had given up fiction entirely for reviewing, was particularly effusive, calling Roth “one of [his] favourite American writers.”) They praised her when she wrote under her real name, for the four novels she wrote as K.G. Ballard, and still another, using a second pseudonym, P.J. Merrill.

Both Hughes and Iles, however, were more critical of one of Roth’s last efforts, Too Many Doctors (published as Operation Doctors in the UK.) Iles noted something “off” about the novel, published in 1963, in his Guardian review.

Perhaps if he had revisited it a few years later, he might have thought differently. But then, Too Many Doctors would be the one novel of Roth’s brought up in news accounts over and over, looking for parallels to what happened to her in real life. For in the novel, the protagonist, using the name Elizabeth Smith, is a passenger on the Tilburg, suffering from amnesia after she had fallen, or been pushed, down a flight of stairs on the ship.

Fear, as Roth wrote, “traveled with the Tilburg like an ill-omened fog.”

Josef Franta noticed the life jacket first. He didn’t know if it was Holly or not, but something—or someone—was in the water. He called his wife’s name again. And again, there was no reply.

He steered the Visa towards the figure in the water, then tossed out a buoy, but it didn’t quite work. Franta tied a line to his body and leaped into the sea. When he couldn’t find Holly, he tried again with a longer line, without success.

Despite mounting exhaustion, Franta returned to the boat, where he fired a few rounds of a gun and sent up some flares. Perhaps some fishing boats would notice and offer assistance. None noticed. No assistance came. Desperate, he sent a message over the radio transom. It reached a fishing trawler, the Santa Africana, who arrived at the scene. Two of its men climbed aboard the Visa and over the course of the next day or two, towed it back towards Safi.

Once he reached the Moroccan port, Franta recounted his story to local police. They launched an inquiry and boats went back out to the spot where Holly Roth was presumed to have gone overboard.

Once he reached the Moroccan port, Franta recounted his story to local police. They launched an inquiry and boats went back out to the spot where Holly Roth was presumed to have gone overboard. By November 25th, the case was closed. The Associated Press reported Roth’s death “had been listed as accidental” with the New York Times citing a report from the vice consul in Casablanca, saying Roth was “presumed lost at sea and drowned.”

Franta, meanwhile, stuck around Safi in the hopes of selling the ketch. It’s not known if he did, or what happened to him after the ruling about his wife’s death.

Holly’s brother, Frank, received a statement in the mail dated October 15, 1964. It contained Franta’s debriefing as well as a “Presumptive Report of the Death of an American Citizen” signed by the Casablanca vice consul.

Perhaps Holly Roth did, in fact, fall over by pure accident. Perhaps Josef Franta was telling the unvarnished truth. I’ve spent years mulling it over and I still can’t quite decide. There is a CIA file on Franta, although abortive attempts to obtain information via the Freedom of Information Act came to naught (save for two duplicate copies of the New York Times article on Roth’s disappearance.)

Roth’s death, and the lingering questions that remain about it, can’t help but loom over her work. But it’s the work I return to, searching for clues about the woman and her life of intrigue, marked with good cheer until the one time, just before dawn in October 1964, it no longer could. 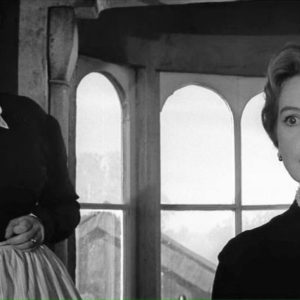 Crime and mystery writers have long dallied with the supernatural. In the best books otherworldly events kindle investigations...
© LitHub
Back to top