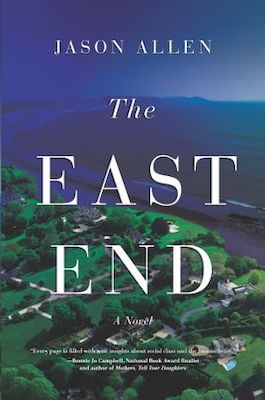 The following is an exclusive excerpt from The East End, Jason Allen’s twisty novel of domestic suspense. Corey Halpern, a restless teenager in the East Hamptons who has taken to creeping into the neighboring estates, finds himself in the wrong place at the wrong time when he unwittingly witnesses a drowning at the mansion where he and his mother work.

He crested the soft hill and slid like a lizard down the other side, his shirtsleeves and the belt line of his jeans filled with sand by the time he entered a copse of beach grass waving in the wind. The mansion’s deck came into view. He wriggled forward another few yards with an arm out to protect his face from the grass blades slapping like whips against his hood with each rush of wind, and squinted up at the vaulted oceanfront windows of the vacation home. The glass wall loomed like a movie screen reflecting the moonlight. He stared at the dark balcony, his muttered curses the only sound aside from the backdrop of crashing waves. Despite overhearing the homeowners say last weekend that they’d be hosting another party tonight, by the looks of things now, the night might turn out to be a total bust.

Just to make sure, he rose to a crouch and crept alongside the three-story east wall and its series of dark windows, on high alert for any signs of neighbors or headlights out on Dune Road as he turned the corner and went scrambling up the front steps on all fours. He cupped his hands to one of the glass panes beside the door and immediately saw what he’d hoped not to see. The red light on the security system wall panel told him all he needed to know. The house was locked down, and breaking in with no one here to hide from, or to narrowly avoid, defeated the purpose. He stood and looked out at the quiet road, the letdown still sinking in, way too aware now that if he didn’t get off this goddamned island soon it was only a matter of time before he started vandalizing these mansions instead of playing pranks, or finally caved and started to cop a serious drug habit, or pounded ten-too-many beers some night and had a head-on collision. If he didn’t escape this place for real, for good, in another year or two he’d fall into the trap of seasonal work, the same cycle of poverty in the winter and endless hours of work all summer that his mom, Gina, went through each year with her bosses, the Sheffields. Maybe only a matter of months or weeks before he slid down into the same slippery pit most of the Hamptons locals never managed to crawl out from.

Feeling gut-punched, Corey exhaled and moped down the front steps between two giant flowerpots that were meant to mimic Grecian urns, tempted to tip them over and smash them, but then noticed a black Ferrari and white Mercedes convertible sitting side by side in the crescent-shaped driveway. The cars meant people were likely inside. The dark windows meant they were likely asleep. The conversations he’d overheard the past two weekends and the overall look of the house meant they were the exact Wall Street types he liked to mess with.

Headlights appeared in the distance on Dune Road just before he slipped between the bushes along the west side of the house and ninja-climbed onto an oversize air-conditioning unit, not hesitating or doubting the wisdom of this at all as he hoisted himself up to a flat section of the roof and scurried over to a shadowy section of the wall. As soon as the headlights passed, he quickly checked the second-story windows. They always leave at least one unlocked, he thought, a rule that once again held true. Buzzing from adrenaline, he used his putty knife to pluck out the screen and jimmied open the unlatched window, then angled his body in over the sill and stepped down into a dim space with a coffee table centered on a cheetah-print rug, a wraparound couch and a wide-screen TV. From there, he tiptoed into the hall. A few doors down, he arrived at a bedroom doorway and immediately stepped back. With his hood still raised and half his head concealed, he peered past the jamb at a couple sleeping on a king-size bed.

A few doors down, he arrived at a bedroom doorway and immediately stepped back. With his hood still raised and half his head concealed, he peered past the jamb at a couple sleeping on a king-size bed.

Even with the ocean roiling on the other side of the glass wall, it was quiet enough in the room to hear them breathing when he dropped to his knees and edged his way toward them, trying to ignore the stabs of pain in the cartilage of his kneecaps with each movement across the hardwood. Slowly, he rose to his feet and leaned beside the bed until he was within a few inches of the couple—a pretty blonde woman in her thirties and a much older man with ghost-white hair—their features softened by the bluish light from the moon hovering outside the balcony door. Corey lingered there, still as ice, so close that he could smell the woman’s white-wine-and-cheese breath. This had always been the ultimate high, daring them to catch him.

Compelled to push the limits, he leaned even closer, ready to run when he whispered next to the woman’s ear, “You are…ugly.”

A moment passed as he listened to the faint rumble of the ocean waves mingled with their soft snores, and watched them, the bodies of both sleepers in the exact same chalk-outline positions in their silk sheets as when he’d arrived, their eyelids still closed, their dreams as peaceful as ever.

Corey sighed and rubbed his sore knees, staring at their dead-calm expressions before he turned and went out. Much less cautiously than he’d entered the house, he walked with heavy steps along the hall and down a wide spiral staircase. In the kitchen he broke one of his rules by flipping on the light, then opened the stainless-steel refrigerator and found it well stocked with imported beer, so he opened one and chugged half of it before returning the open bottle to the shelf. The milk— yep, that’s how he’d prank them. A quick search of the cupboards and he located the bulk container of Morton salt, which he emptied into the open milk carton and swished together before quickly returning everything where he’d found it. He cracked a smile, thinking of their expressions in the morning when they munched a spoonful of cereal or slugged the first sip of coffee with horribly salty milk mixed in. But still, this didn’t seem enough; so just after he tiptoed from the kitchen through the vast living room and eyed the deck through the sliding glass doors, he stopped, turned toward the staircase and whispered, “What if I woke them up on purpose?”

This violated one of the most fundamental rules of his ninja code—don’t do anything stupid to increase the risk of getting caught. But the decision had been made even before he’d finished asking the question, and with his next step the door latch turned in his gloved fingers and he exited the house onto the deck, intentionally setting off the alarm, a siren blaring as he backpedaled toward the oceanfront railing. No more than a few seconds passed before lights flashed on in the window above the balcony and two shadowy figures entered the frame. Corey ducked down like a gargoyle at the corner of the deck, not sure yet what he wanted to do.

Then the thought struck like a lightning bolt—not all of us are on vacation—and he shot to his feet with his hands cupped to his mouth and shouted, “Go back to the city!”

He heard the woman shriek and the man call out, “Holy shit!” from the other side of the glass, and then in a blink their silhouettes vanished from view.

From THE EAST END. Used with the permission of the publisher, Park Row. Copyright © 2019 by Jason Allen.

What Writing a Book Taught Me About Being an Editor 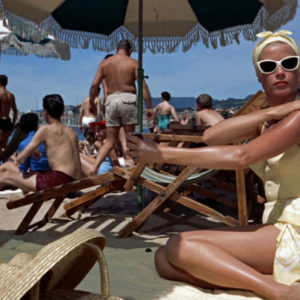