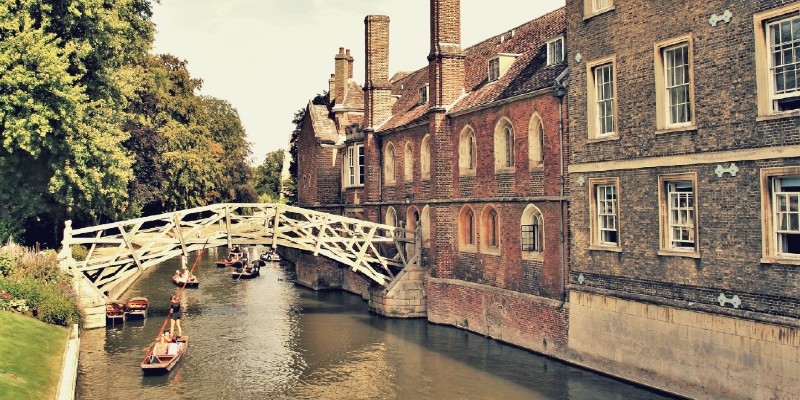 The "Educated" Crime Novels of Cambridge

In a city dominated by a famous university, students, professors, and the occasional vicar supply the mysteries.

Some time back, we published a Crime and the City on Oxford. So, protocol declares that we should have a column on its great rival university city, Cambridge. Perhaps one day we can merge the two as a giant Oxbridge Crime and the City? Though both are universally known as ancient and venerable university towns, the two are very different. Oxford is far larger than Cambridge. As well as the university there is a large manufacturing base in the city—cars particularly—and it is integrated into the wider English Midlands economy. By contrast Cambridge is relatively small (only about 200,000 people including the student population in term time), about 50 miles north of London in Eastern England’s Fenland. Cambridge life is almost exclusively centred around the university and associated spin-off economy—biotech, genetic research, locally dubbed “Silicon Fen”. Both are now cities, though Oxford was declared a city in 1542 and Cambridge only in 1951. Traditionally in England a town had to have a cathedral to deserve city status. Cambridge doesn’t have one (though there is one that dates back to 1083 at nearby Ely) so had to lobby hard and was eventually, for “exceptional” reasons” (i.e. it’s a famous university town and lots of important people studied there) granted city status. So that’s the city…. now the crime.

Alison Bruce started out writing true crime books before launching a crime fiction series featuring Detective Constable (DC) Gary Goodhew, the youngest detective in the city’s CID based at Cambridge’s Parkside Station. The series—now up to seven books—starts with Cambridge Blue (2009) and Goodhew investigating a series of murders involving an eccentric Cambridge family. The entire series, running through to the final book, Cambridge Black (2017) stays firmly in Cambridge.

Barbara Cleverly is a writer who lives in Cambridgeshire and is known for her Detective Inspector John Redfyre novels. The series started with Fall of Angels (2018) set in 1923. Great War veteran Redfyre is a godsend to the Cambridge CID, a city that needs a really good detective as the fusty old town encounters the Jazz Age. Originally from the city’s educated elite, Redfyre is no stranger to the local godfathers running its esteemed colleges and universities. The second Redfyre novel, Invitation to Die (2019) takes places a year later in 1924 with multiple murders at a college. Additionally Cleverly has published a collection, The New Cambridge Mysteries (2015), of mystery stories set in and around Cambridge including Inspector Redfyre and a future-set tale involving the feisty Detective Constable Stella Kenton seeking a killer in a disturbing, dystopian view of Cambridge (and policing) in the year 2022.

Kate Atkinson’s Jackson Brodie series has a large number of fans. In Atkinson’s novels Brodie is a former soldier and policeman (ex-Cambridge Constabulary) turned private investigator, originally from Yorkshire in the north of England. Yet his turf—hunting everything from lost cats to cheating husbands—is initially the south of England and Cambridge, a part of the country he feels frankly uncomfortable in. He constantly muses on moving back up north. So, when the BBC decided to film, northern fans of Brodie were excited, an excitement heightened when it was announced that Jason Isaacs, himself an actor from the north (though not exactly Yorkshire) would play Jackson Brodie. Then the BBC decided to film the whole series not in Cambridge but in Edinburgh—a beautiful city for sure and where some of the Brodie books are set, but not Cambridge (for a start Edinburgh is hilly and Cambridge flat as a pancake). The fans were divided. Still we have the books. The first Jackson Brodie, Case Histories (2004) is the one we need to focus on here—later books do indeed head north to Edinburgh and Brodie’s home county of Yorkshire and the city of Leeds.

Nicola Upson’s Josephine Tey mysteries also have a large and loyal following. Upson’s hero is a fictional version of the Scottish Golden Age crime writer. The series likes to mix up people real and fictional from the inter-war period. In Upson’s series Tey invariably becomes involved in helping her friend Detective Chief Inspector Archie Penrose solve murders. In the seventh book in the series (currently up to nine books with more coming), Nine Lessons (2017) a murder case leads Penrose to Cambridge, where, coincidentally, his old friend Josephine has recently settled. Soon after a fresh body turns up in the King’s College Chapel and some nasty university-related rivalries start to come to light.

Upson’s world is a reimagined Golden Age though it’s not surprising, given what a popular elite pastime writing crime novels was in 1930s England and that many of the elite were (and are) educated at Cambridge, that the true Golden Age should have found the (then) town a good setting. Richard Wilson Webb (who often wrote with various partners) wrote a number of Golden Age mysteries under the pen-name Q Patrick. His early novels, including Murder at Cambridge (also known as Murder at the Varsity, 1933) were traditional Golden Age whodunnits though later he, and his collaborators, veered more towards the noir style. Webb was born in England but worked for a pharmaceutical company in Philadelphia and so many of the novels he was involved in had American elements in terms of both characters and, later, style. Murder at Cambridge is narrated by 24-year-old Harvard graduate Hilary Fenton, an American studying English at All Saints College. It’s a locked room mystery that all occurs within the course of a week. There lots of things you might expect in an inter-war Cambridge-set novel—cricket, dons, suspicious South Africans. The first American edition included a glossary of Cambridge terms and assorted English-isms.

Though not always in Cambridge itself Rory Clements’s five book series featuring maverick Cambridge professor Tom Wilde are excellent thrillers. In Corpus (2017) it is 1936 and Europe is in turmoil and headed towards war while Britain faces the King’s abdication. Wilde is plunged into a world of espionage that moves between Berlin and Cambridge. In Nucleus (2018) it is the beginning of the war in 1939 and the Nazis are murdering Britain’s top scientists in Cambridge. In the fourth book in the series, Hitler’s Secret (2020), it is 1941 and Wilde’s Cambridge is involved in the development of new weapons that could change the course of the war. But so are the Germans. Wilde must smuggle a secret weapon out of Germany back to Cambridge. Tom Wilde is scheduled to return in 2021 in the fifth book in the series, A Prince and a Spy.

Finally let’s take a punt along a couple of miles along the River Cam to Grantchester, effectively these days a suburb of Cambridge. James Runcie’s popular Grantchester Mysteries novels follow Church of England Vicar Sidney Chambers, his colleague William Davenport and Detective Inspector Geordie Keating of the Cambridge Police set in the immediate post-war period. Runcie should know the world he’s writing about—he is the son of the former Archbishop of Canterbury, Robert Runcie. The books have been successfully adapted for TV by the UK’s ITV with James Norton and Robson Green. Chambers—full time priest; part time sleuth—is a World War Two veteran and seemingly lifelong bachelor dedicated to the church. The seven Grantchester books, starting with Sidney Chambers and the Shadow of Death (2012), were originally short story collections. For fans who maybe only know the TV show there is also a good prequel novel The Road to Grantchester (2019) which cover the years 1943 to 1951 and features Sidney Chambers’s war-service with the Scots Guards in Italy, his first love, his decision to become a clergyman, and his curacy amidst the ruins of post-war ruins of Coventry. 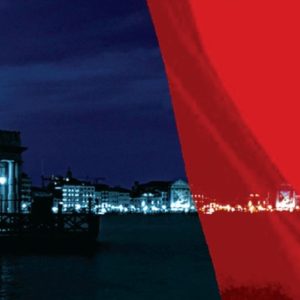 Another week, another batch of books for your TBR pile. Happy reading, folks. * Matthew Hart, The Russian Pink (Pegasus) "A...
© LitHub
Back to top