It was the so-called "Belle Epoque." It was also a violent, anxious period that gave birth to fascism.

One of the great pleasures of writing historical fiction is the opportunity it provides to step back in time and engage imaginatively with a period that appears to be completely different from your own. This appeal has never been motivated, for me at least, by escapism. Because the past may indeed be another country, but like Joyce’s Ireland or Leonardo Sciascia’s Sicily, the present is something that you always end up writing about no matter how far you move away from it

As a writer who often deals with historical catastrophes and episodes of social/political breakdown, I have often looked to the past for warnings and precedents in both fiction and non-fiction. This was the case with The Devils of Cardona, and also with my forthcoming novel Black Sun Rising. Despite the greater historical distance, the parallels between past and present at first sight might seem clearer in a novel set in sixteenth century Aragon. In Black Sun Rising the relevance to the present seems more tenuous. The 1909 urban uprising in Barcelona known as ‘Tragic Week’ is a key episode in Spanish and Catalan history, but it doesn’t have the obvious wider resonance as the conflict between Muslims and Christians in the Spain of Philip II.

Writing it required me to immerse myself, not merely in Spanish history, but in the period of history which later became known as the Belle Epoque. As the term suggests, the notion of a Belle Epoque—beginning roughly in 1871 and ending in 1914—is essentially celebratory. It conjures up notions of  peace, optimism, artistic endeavor, economic prosperity and technological transformation that were supposedly eclipsed by the calamitous events of the first half of the twentieth century.

At first sight, the notion of a ‘Belle Epoque’ could not be further from our own century, with its pervasive sense of dread, its cultural and political pessimism, and its cascade of institutional and governmental failures.  Even before the Covid-19 pandemic, 21st century politics were dominated by the belief that things are bad and probably getting worse. A succession of savage terrorist attacks, wars, refugee crises, financial and political implosion, the looming prospect of ecological collapse—all these events and possibilities have been part and parcel of the politics of the new century.

Where the first decade of the century was dominated by 9/11 and the ‘war on terror,’ the last ten years have seen the steady rise of rightwing populists across the world, many of whom have used this fear and dread to propel themselves to power. It was against this background that I researched and wrote Black Sun Rising, and throughout this process I was often struck by the parallels between the early twentieth century and the beginning of the twenty-first.

To understand these parallels, we need to understand that the Belle Epoque was never quite as beautiful and untroubled a period as it was later imagined to be. Then, as now, rapid technological transformation was accompanied by anxieties about the speed of progress and the new forms of ‘globalization’ wrought by trains, steamships, and transoceanic telegraph lines—not to mention the movements of unwanted people across borders.

The Belle Epoque was a period in which rising economic prosperity in the great cities of Europe and America was accompanied by stark and brutal disparities of wealth and power both within countries and between them. On both sides of the Atlantic, urban poverty was seen by governments and social commentators not just as a social problem, but a political and even military problem. This was a period in which politicians and social scientists were terrified of the revolutionary potential of the urban slums, and fretted about the negative impact of the urban poor on the national ‘stock.’

In Britain, the hard-won victory in the Second Boer War prompted a parliamentary inquiry into the physical deterioration of the nation’s youth. In France, skiing competitions were judged by army officers, who regarded skiing as a means of cultivating the ‘Gallic’ physical virtues that would enable France to better resist the Hun.  In Spain, the notion of a new Spanish African Empire was presented as an antidote to Spain’s defeat  in the Spanish-American War that would enable Spain to recover its lost imperial ‘greatness.’

Where today’s alt-right websites seethe with fantasies of racial displacement and the ‘great replacement,’ politicians and commentators in the early twentieth century claimed that their countries were being overwhelmed by ‘destitute foreigners’ (often a synonym for Jews) from Russia and Eastern Europe. At various times between 1871 and 1914 different categories of foreigners were identified as real or potential threats to the cultural integrity of the nation-state.

Then, as now, these fears were often racialized. In the last twenty years, a succession of conservative writers and white supremacists have all endorsed the conspiracy theory of ‘Eurabia,’ in which an exhausted and decadent Europe has supposedly lost its cultural vitality, to the point when the continent is powerless to prevent its colonization by Islam. Similar fantasies were expounded in the decades leading up to World War 1 and beyond, as writers and racial theorists warned of the forthcoming collapse of the white race across the world, in response to population growth amongst ‘inferior peoples’ in Asia and Africa.

This was a time in which racism had yet to lose its veneer of respectability, in which the  equation between whiteness, civilization, and empire rarely found room to acknowledge the shocking violence and brutality used to suppress European and American colonial subjects in China or the Philippines, the Belgian Congo, or the genocidal extermination campaigns waged by the German army against the Herero and Nama peoples in South West Africa.

In Europe, masculine notions of national ‘virility’ were often intensified by the belief that their countries were becoming dangerously ‘soft’ and feminized, as a result of the increasingly powerful movements for female suffrage and equality, and the entry of women into the workplace. In Germany and Austria, extreme nationalists such as Jorg Lanz von Liebenfels and Guido von List created Aryan societies that fused pseudo-erudite occultism, racial mysticism and antisemitism with the kind of vicious misogyny that many of the alt-right culture warriors of the twenty-first century would find entirely familiar.

The cultural and racial pessimism of Belle Epoque society was often expressed through anxieties about ‘degeneration’ and a sense of the fragility of industrial civilization. This was a period in which the Italian criminologist Cesare Lombroso depicted anarchism as a product of physical and intellectual ‘atavism’ that could be identified by the apelike features of its protagonists; in which Max Nordau and other writers saw ‘degeneration’ as a cultural and psychological malaise produced by industrial/urban civilization, and an array of novelists including Robert Louis Stevenson, Bram Stoker and Conan Doyle explored the thin veneer of civilization and the blurred boundaries between the animal, the human, and the supernatural.

Fears of degeneration, atavism, and collapse were crucial to the emergence of eugenics and the concern with racial ‘hygiene’ in the last decades of the Belle Epoque. Unwilling or unable to contemplate socioeconomic solutions to the socioeconomic problems they identified, governments and scientists were attracted by the possibility of reducing or eliminating the morally and physically ‘unfit’ from their populations. Euthanasia, forced sterilization, prohibitions on marriages between categories of ‘inferior’ people—all these solutions were discussed and contemplated in the decades leading up to World War I.

This is the Belle Epoque that forms the basis of Black Sun Rising, in which the ‘black sun’ of the Aryan/Wotanist pre-Nazi cults was still a marginal phenomenon, and the villains who appear in the novel occupied the fringes of early twentieth century politics. It took the catastrophe of a world war to bring these crazed racial scientists, eugenicists, cultists and anti-Semites to the centre of power in Germany.

So to some extent, the Belle Epoque can be seen as a prehistory of fascism, and throughout the period I spent writing it, I watched the politics of my own era continue their seemingly unstoppable collapse, and as the fringes moved ever closer to the mainstream,  it was impossible not to see the present in the past.

And it was impossible not to conclude that the monsters who stalk the novel’s pages are always among us, always waiting for their opportunity to take centre stage, and I hope that this somewhat dark entertainment can remind twenty-first century readers that it is the responsibility of every generation to recognize them whenever they appear, and do what we can to try and stop them. 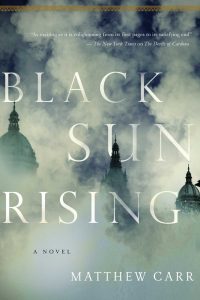 Matthew Carr is a novelist, journalist, blogger, and lifelong Hispanophile. Matt has written for various publications including the New York Times, the Observer, and the Guardian. His nonfiction is published by The New Press: Fortress Europe; Soldiers, Civilians, and the American Way of War; and The Savage Frontier. This is Matt's second novel, following the acclaimed The Devils of Cardona (Riverhead), which was a New York Times Book Review Editors' Choice. He blogs regularly at: www.infernalmachine.co.uk. 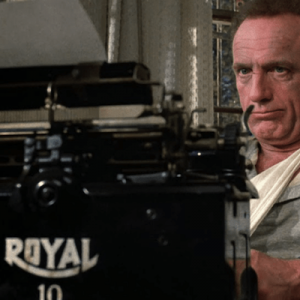 There’s nothing more meta than a writer who writes about a writer. It’s the world we live in and, often, the most convenient...
© LitHub
Back to top