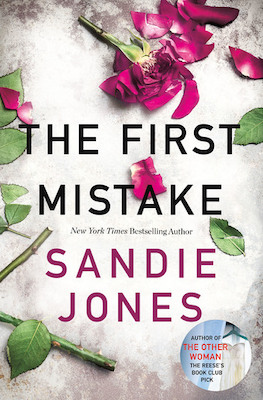 The following is an exclusive excerpt from The First Mistake, Sandie Jones’s latest domestic suspense binge read. In the years after her first husband’s death, Alice is finally beginning to adjust to a new life—with Nathan, her second husband, a successful business, and two children. But when Nathan starts to act suspiciously, Alice turns to her best friend, who she’s always thought she could trust.

“You’re not going to let him get away with that, are you?” asks Beth, aghast, as we have dinner the following night.

I twirl spaghetti absently on my fork and feel surprisingly emotional. I suppose it’s because up until now I’d convinced myself that what David did was no big deal, but Beth’s reaction proves to me that it was.

“Have you told Nathan?”

I shake my head. “I didn’t know whether to or not. I might have done if we hadn’t had a row.”

She grimaces, and I already regret saying anything. But she’s one of the few friends I have who has nothing to do with AT Designs and no connection to Nathan. In fact, she still hasn’t met him, and part of me wonders if I’ve kept them apart, albeit subliminally, so that I can say how I feel without being judged, or running the risk of it getting back to him.

“What did you row about?” she asks.

I instinctively look around the tables closest to us, checking for anyone I know. Not that they’d be able to hear us over the din of the birthday party that is thankfully beginning to peter out. There is only so much of “Zac” and his excitable friends that one can be expected to endure, especially on the rare occasion that you’re child-free yourself.

“Just the same old stuff,” I say dismissively. She leans forward. “Like what?”

“About me going away,” I say. “It’s the only thing we ever row about, and every time I try to explain myself, I think he understands, only for it to rear its ugly head again a few months later.”

She screws her face up in confusion. “Where are you going?”

“I’m not, that’s the whole point.” I no longer want to have this conversation, as I’m sure that once she hears my side, she’ll think I’m just as mad as Nathan does.

“I’m not with you,” she says, half laughing. “It’s you not going away that’s causing the problem?”

I nod. “He wants me to go to Japan, if we get this big job that we’re pitching for, but I’ve not been away without the girls since . . .”

My voice breaks, and she leans across to put her hand on mine.

“It’s a weird and complicated thing, but I just can’t bring myself to do it. Every time I think about it, I’m paralyzed by fear.”

“That’s understandable,” she says soothingly. “Losing Tom like that was such a huge shock—I don’t imagine anything will ever be quite the same in your world again. What is it that panics you the most? The idea of something happening to them while you’re away? Or the possibility of some- thing happening to you?”

“You don’t need to apologize, Alice,” she says.

“I wasn’t with him when he died and I’ll never forgive myself for not being able to save him.”

“I just don’t feel comfortable leaving them,” I say. “Tom walked out the door one day and he never came back. I wasn’t with him when he died and I’ll never forgive myself for not being able to save him. If we’d been together, he’d still be here, and that’s what constantly goes around in my head whenever I’m away from the girls. How can I save them if I’m not with them? It takes all my strength to drop them off at school each day. But Nathan doesn’t get it. He thinks I should be embracing the opportunity to go away, and now there’s a chance of us getting this job, it just feels as if I’ll be under even more pressure.”

“Most days I want it more than anything,” I say honestly. “It’s been in the pipeline for months and it’ll be such a huge coup for us. But on the days in between, I panic; about the stress it’ll put me under and that I might be forced to leave the girls.”

“I get that, but the longer you worry about what might happen to them, the less time you’ve got to enjoy yourself and live the best possible life you can live.”

“You, more than most, know how short life is.”

I nod. “Yet ironically that makes me fear it all the more.”

“Look around you,” she says. “You’ve got it all. A husband who clearly adores you, two beautiful children, a gorgeous house, money in the bank.”

I sniff and muster a smile.

“And not only that, but you’re a talented interior designer who is, touch wood, in good health.” I put a hand on top of my head. “God willing.”

She does the same as she brings her glass to her lips.

“I’m sorry, I don’t mean to be morose,” I say, holding back from adding “or sound ungrateful,” knowing that must surely be what she thinks of me. I look at her and chastise myself for bemoaning the amazing life that I lead when hers is a daily struggle.

“Not bad,” she says sadly. “I had an interesting chat with Millie yesterday.”

“Yeah, she asked me about her dad.”

I look at her over the top of my glass, trying to read her expression. Her facial muscles contract and there’s a pulse below her eye. Talking about her ex is always a thorny issue and I know her well enough now to gauge whether she’s in the mood to talk about him or not.

Like all of us, Beth had been convinced she’d know if her other half was playing away. On one of our many nights out, my bravery enhanced by three glasses of rosé, I’d asked, “Was there no part of you that heard alarm bells or saw the signs?”

“Nope,” she’d said. “I was so in denial, or insanely trusting, whichever way you want to look at it, that I hadn’t a clue.”

“So when did he last see Millie?”

“He hasn’t,” she said, her words a little slurry, or maybe my ears just had a blush-infused mesh over them. “He left when I was pregnant and we never saw him again.”

“He’s not seen Millie since?” I’d asked incredulously, my brain unable to compute how a father could do that. How can life be so unfair? How can it give men children they don’t want, and yet take away the fathers other children so desperately need?

She shook her head, her bottom lip trembling. “How could he do it to me, Alice?” she remonstrated. “I gave him everything.”

Article continues after advertisement
How can life be so unfair? How can it give men children they don’t want, and yet take away the fathers other children so desperately need?

I fell back into my chair, feeling suddenly and inexplicably drawn to my friend. Here was someone who could begin to understand what it felt like to have the person you love, the man you’ve shared so much with, disappear from your life. She knew how it felt to have the rug pulled out from underneath your feet, tossing you up in the air and making you wonder if you’ll ever come back down again.

I could have argued that at least her partner is alive, while mine is dead, but when I tried to put myself in her position, I was almost grateful that I was in mine. I couldn’t bear the thought that Tom had chosen to leave my life, and that of our child. He wasn’t given the choice—none of us were.

“How . . . how did you find out he was seeing someone else?” I’d faltered, unable to get my head around what she was telling me.

“Purely by chance. I’d gone away and had come back earlier than expected and there they were.”

“Yeah, so . . .” She’d looked out across the restaurant as her eyes filled with tears.

I’d reached across the table and placed my hand on top of hers. “I can’t even begin to imagine . . . Is he still with the woman . . . ?” I had almost said, “he left you for,” but it would have sounded too hurtful.

Sensing my predicament, she’d finished the sentence for me.

“I have absolutely no idea,” she’d said scathingly. “I imagine they’re playing happy families somewhere. Well, she got what she wanted, didn’t she?”

I’d pulled back, looking at her quizzically. “You sound like you’re blaming her. But it’s likely that she didn’t even know you existed.”

“Of course she did,” Beth had spat. “You know when the man you’re with is supposed to be with someone else.”

I’d wanted to argue the case, but I could tell by her hardened features that it wasn’t one I was going to win.

As a tear fell onto her cheek I’d moved to her side of the table, holding her close and gently pushing her auburn hair away from her wet cheeks. “How could he do it, Alice? How could I not have known what was going on?”

“How would any of us know?” I’d offered reassuringly, though I would reverberated loudly around my head.

“Don’t you ever worry about Nathan straying?” she’d asked, as if reading my mind.

I had shaken my head. “That’s not on my radar. I’ve had worse happen to me, so when he’s late home, I worry more about his safety than who he might be sleeping with.”

“I wouldn’t worry about it,” she’d slurred. “There’s no way Nathan would ever cheat. I mean, just look at you for God’s sake. He’d be out of his mind.”

I’d looked down at my slim legs, encased in tight dark denim jeans, and brushed imaginary crumbs from my cleavage, as it descended into the plunging neckline of a white T–shirt. I try my best to stay in shape, but my willpower isn’t always what it should be. God must be a man, as no woman would be so cruel as to make chocolate, biscuits, and crisps taste so darn good.

From THE FIRST MISTAKE. Used with the permission of the publisher, Minotaur. Copyright © 2019 by Sandie Jones.

"L.A. Was Poisoned For Me": Inside the 20 Year Cover-up of The Notorious B.I.G.'s Murder 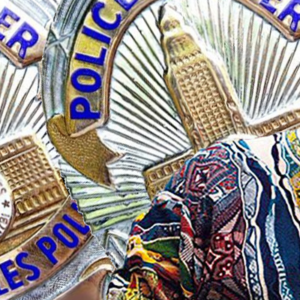 "L.A. Was Poisoned For Me": Inside the 20 Year Cover-up of The Notorious B.I.G.'s Murder Sixteen years ago, Randall Sullivan's groundbreaking book, LAbyrinth, explored the role the Los Angeles Police Department...
© LitHub
Back to top