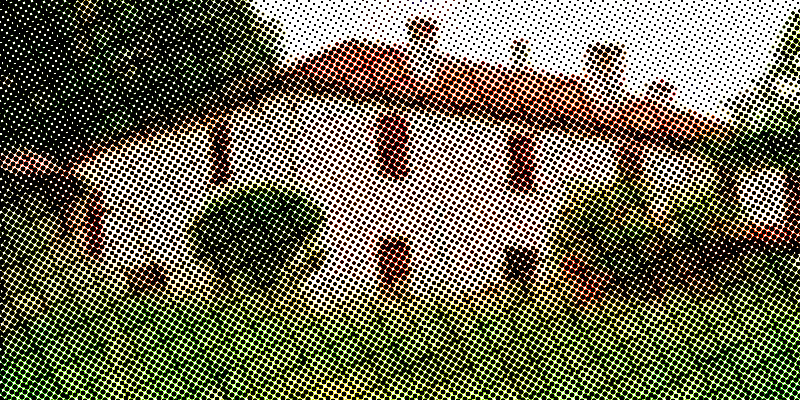 Gerald Jay Goldberg was haunted by a brutal murder of a tourist in the South of France. Decades later, his family finishes his series.

Via Nan A. Talese

It was the perfect venue for a summer vacation.

A comfortable stone country house in the Dordogne—land of foie gras and deep green rolling hills—not far from Issigeac, one of the most idyllic of the “bastide” villages.

The rambling old home was set high on a hill, with a spacious living room, and big French doors opening onto a terrace. In the fields out back, among the trees, sat a large pool for swimming every morning.

Our family, all Francophiles, had come for a summer of sightseeing in the narrow winding streets of the medieval towns, and the bustling Sunday morning markets with the tomatoes glistening in the sun, and strings of sausages swaying in the breeze.

All in all, it was a delightful spot for a vacation. Until my mother noticed the headlines in the local paper.

“Tuerie a Monfort!” they screamed. Slaughter at Monfort…

“Police in southwestern France were baffled yesterday by the barbaric and apparently motiveless murder of four Dutch tourists at a holiday home near Toulouse,” said one European paper. “Three of the victims, all in their 50s and 60s, were tied hand and foot and gagged before their throats were cut. The fourth was shot in the throat, apparently after taking refuge in a workshop. Nothing appeared to have been stolen from the house, which belonged to one of the couples.”

The year was 1999, and the killings had taken place in May—a few weeks before we arrived. People would be talking about the details all through that summer. In southwestern France—just a two hour drive from where we were staying—four travelers from Holland, two sisters and their husbands, had been brutally killed. A family on vacation… not so different from us.

France was shocked by the savagery, and the strangeness of the crime. “There was blood everywhere—it was carnage,” said one report. On top of everything else, all the doors and windows of the farmhouse appeared to be sealed shut from the inside. A real world locked room mystery.

In the weeks that followed, one man was charged—a Franco-Tunisian immigrant who had been working for the family as a handyman “au noir” (in the local phrase for “off the books”). But his lawyer protested it was impossible for one man to have killed four people at the same time with a knife. “They fabricated a guilty person, and believed it,” the lawyer insisted.

“I’m innocent!” the handyman yelled as he was led into the station in handcuffs. “I’m just a victim of a police mistake.”

My mother kept buying newpapers like Sud-Ouest from the local newsstands. And as we sat down around the wooden table out on the terrace for a glass of wine and lunch, the conversation frequently turned to the case.

Gathering around the table was my father Gerald Jay Goldberg (a creative writing professor at UCLA and Pulitzer-prize nominated novelist), my mother Nancy Marmer (managing editor at Art in America), my wife Colleen (a lawyer) and me (a filmmaker for National Geographic and Discovery), and our six-year-old son James.

My father had spent his life writing “literary” fiction (The Lynching of Orin Newfield, Heart Payments). But for all of us, the entire murder scene was so suggestive, the details so vivid. A peaceful French village. A handyman painting a vacation house, while the family is out at dinner. Friends arriving two days later to find the telephone off the hook, the electricity cut, the bodies scattered through the house. The handyman looked guilty. But still the doubts persisted. What if there were more to this case?

To be honest, it was a creepy feeling to be reading about potential killers at large while we were in an isolated house, off in the countryside, with the darkness of rural France as evening came on, and the scraping of the owls’ claws in the rafters of the pigeonnier – the stone bird house above the bedrooms—scratch, scratch, scratching through the night.

Over the following days, we took day trips to Bergerac, and the chateau at Monbazillac to try their white desert wine. Just the perfect touch of sweetness, and that rich golden color. My dad—a former lifeguard—would be in the pool swimming every morning, teaching our son the rudiments of the crawl. There was badminton on the back lawn, and afternoons dozing off outside in the sun. At night, we’d venture out to the small local restaurants to try the little “new” potatoes, slow-roasted in duck fat—a heart attack on a plate, but truly one of the best things you will ever taste in your life.

Still we kept returning to the case. And in the months that followed, my dad also found time to talk with members of the French National Police and the gendarmerie in Paris and the Dordogne. So it was no surprise that as the ideas percolated, he started writing.

In the coming years, that writing (originally titled An Accident in Taziac) became The Paris Directive, published by Nan Talese’s imprint at Doubleday (under the nom de plume Gerald Jay). Not just the Monfort case, but the house, the local boulangerie, even the pigeonnier, all found their way into the book.

At its heart was the character he created—Inspector Paul Mazarelle, hot-tempered, impulsive, irascible but tender-hearted. A big man with a big nose. Reviewers called him “a wonderful creation,” “charming, indomitable.” The book itself was said to be “pretty close to mystery nirvana.”

Fast-forward several years. My father had gotten inspired to work on a next Inspector Mazarelle novel—The Hanged Man’s Tale—this time set back in Paris. Mazarelle has returned from the provinces and is leading his own homicide unit out of Paris’s famed Brigade Criminelle at the Quai des Orfevres.

Once again, he was working with the idea of the wrong man. A murder victim is discovered dangling inside the tunnels of a Paris canal—the only clue, the tarot card in his pockets: the Hanged Man. When an innocent suspect is railroaded into prison for the homicide, Mazarelle sets off on the hunt for the real killer.

Once again, Mazarelle was taking refuge in the comforts of the table—the pleasures of Beaujolais and bouillabaisse.

But this time, the mystery would plunge this classic French detective into the dangers of a very modern Paris — an underworld of ruthless white supremacists looking for scapegoats in Paris’s growing immigrant community, corrupt cops eager to cover up a shady side business, and a conspiracy of secrets that threaten his own life.

My father was well underway on the book. He had mapped out the plot—the murder, the villain, Mazarelle’s role, and the love story—and he had written a large chunk of it. But this time, life threw him an unexpected twist.

About halfway through the book, a stroke hit. A small stroke, but bad enough.

In the aftermath, it was clear that writing would be hard. At first he lost a third of his vocabulary. Which is pretty much a disaster for a writer. But then it started coming back. And with it, his will-power, his push to finish this manuscript. It was amazing to see, week by week, month by month, the words coming back, the memories returning. Still it was also clear he didn’t have the stamina or the big picture vision to see it all through. That’s where we came in….

So our family found itself gathering around a dining room table once again. It was important to my dad to see this book through. We would have to help him get it across the finish line. In an unusual three-generation meeting, we decided we would try to work together as a writing team. We were all writers ourselves. (My son James, present at the outset, was now a grad of the USC film school and a young filmmaker in his own right.) As my mom put it: “We couldn’t bear the thought that Mazarelle would disappear, and that the great work that Jerry had already done on it would not get published.”

My father was very much part of the writing process. He still had his vivid sense of scenes and characters, and surprising flashes of language. In his case, the interesting thing about the writing mind is that he could focus one scene at a time, and have great ideas. But he had difficulty keeping an entire storyline in mind. And yet he retained his gift for language that sparkles, for images that surprise—like a murder victim plummeting down an elevator shaft, “her shrieks trailing after her like a torn parachute.”

With all of us working as a unit, the writing started to come together. The key was always to write in a single voice—the voice of Gerald Jay—lively, upbeat, with a hint of wry smile… weaving elements of the thriller and the classic French mystery.  A style that reviewers had called “sophisticated,” “rich,” “vastly entertaining,” “stylish, dark, humorous, suspenseful—but mostly very readable.” That’s the thing we worked on, editing each other’s sections to make sure we had that streamlined, unified tone.

All along the way, we knew how much my father cared about this character, how significant it was for him to get this book completed, and in, and accepted for publication. And that’s why we were so proud to gather around the table one more time to celebrate the upcoming publication, and his 90th birthday. It would turn out to be just a few weeks before he ended up going back into the hospital.

Some families own grocery stores. For us, writing is the family business. When I was young, my parents and I used to go over each school essay together. I ended up doing the same with my son, much to his dismay. When I grew up I was lucky enough to work with my dad on two nonfiction books (the bestselling Anchors: Brokaw, Jennings, Rather and the Evening News and Citizen Turner). There are huge advantages to working together as a family. You have a shorthand. Then again, you’re a family, with all the baggage that comes along. Sometimes you drive each other crazy. But we also have the pleasure of working together. And that’s the biggest gift that summer in the Dordogne has given us.

Before my dad passed away, even in his last days, we were sitting with him in the hospital, discussing details of characters and plotting for a next Mazarelle—set this time, in part, in the countryside of Brittany and Normandy. We were lucky enough to have mapped out an outline for the next book with him—a great road map for the story… and the series to come. We were all there together for the birth of this amazing creation. And now, we can’t wait for the next step. 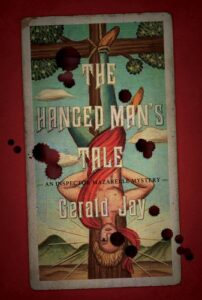 Robert Goldberg is the former TV and media critic of the Wall Street Journal, and a filmmaker. The Hanged Man’s Tale is due out from Nan Talese / Doubleday this December. 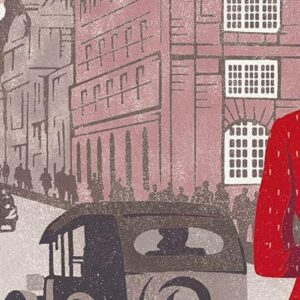 Another week, another batch of books for your TBR pile. Happy reading, folks. * Santiago Gamboa (transl. Andrea Rosenberg),...
© LitHub
Back to top