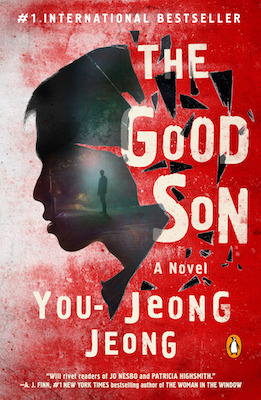 The following is an exclusive excerpt from The Good Son, an intense psychological thriller by South Korean crime writer You-Jeong Jeong. In the following passage, a young man wakes up smelling blood, and tries to piece together the events of the night before.

The smell of blood woke me. It was intense, as though my whole body were inhaling it. It reverberated and expanded within me. Strange scenes flitted through my mind—the fuzzy yellow light of a row of street lamps in the fog, swirling water below my feet, a crimson umbrella rolling along a rain-soaked road, a plastic tarpaulin shrouding a construction site snapping in the wind. Somewhere a man was singing and slurring lyrics: a song about a girl he couldn’t forget, and about her walking in the rain.

It didn’t take me long to figure out what was going on. None of this was reality or even the remnants of a dream. It was a signal my head was sending my body. Stay lying down. Don’t move. It’s the price you have to pay for not taking your medication.

Not taking my meds was a quenching rain in the desert of my life, even if it sometimes caused a seizure. Right now, I was experiencing the unsettling hallucinations that warned me a storm was imminent. There was no safe harbor; I could only wait for it to arrive. If past experience was any indication, when it was over, I wouldn’t remember what had happened. It would be simple and intense, and afterward I would be tired and depleted. I deserved this; I knew full well what I was getting into when I chose this path. It was an addiction; I kept doing it again and again despite understanding the risks. Most addicts get high to chase after a fantasy, but for me it was a diﬀerent route: I had to get off my drugs to reach a heightened reality. That was when the magic hours opened up—my headaches and tinnitus disappeared, and my senses became acute. I could smell like a dog, my brain whirred quicker than ever, and I read the world by instinct instead of with reason. I felt empowered and superior.

I could smell like a dog, my brain whirred quicker than ever, and I read the world by instinct instead of with reason.

Even then, I still had tiny dissatisfactions. I never felt superior to Mother and Auntie. These two women treated me like a seat cushion—something to be suﬀocated and smothered. I knew what the chain of events would be if Mother were to witness me having a seizure. As soon as I recovered, she would drag me straight to Auntie, the famous psychiatrist and director of Future Pediatric Clinic. Auntie would look into my eyes and talk to me kindly to try to get me to listen to her. Why did you stop taking your pills? Tell me honestly, so I can help you. Frankly, though, honesty is neither my strong suit nor something I aspire to. I prefer to be practical, so my answer would be: I forgot to take it one day, then the next day I forgot that I’d forgotten the day before, and while I’m at it, why don’t I just say that I’ve forgotten about it every day until this very moment? Auntie would declare that I was falling into another dangerous pattern, and Mother would order me to take the pills at each meal under observation. They would drill into me the steep price I would pay for a few thrilling days, making it clear that as long as I continued to behave this way, I would never be free of their gaze.

Suddenly Mother’s voice popped into my head. I had heard it, soft but clear, right before I woke up. But now I couldn’t even hear her moving about downstairs. It was so quiet. A deafening stillness. It was dark in my room; maybe it was still early, before the sun was up. She might still be asleep. Then I could have this seizure and be done with it without her having to know about it, like last night.

Around midnight, I’d stood panting near the sea wall on my way back from a run to the Milky Way Observatory in Gundo Marine Park. I ran when I got restless and felt my muscles twitching with energy. I thought of it as “restless body syndrome.” Sometimes I ran in the middle of the night; it wouldn’t be exaggerating to call it a mad urge.

The streets were deserted, as they always were at that hour. Yongi’s, the street stall that sold sugar-filled pancakes, was closed. The ferry dock below was shrouded in darkness. Thick fog had swallowed the six-lane road by the sea wall. The December wind was biting and powerful, and a torrential rain was falling. Most would consider these adverse conditions, but I felt as though I was floating in the air. I felt fantastic. I could float all the way home. It would have been perfect if it hadn’t been for the sweet smell of blood perfuming the wind, suggesting an impending seizure. A girl got oﬀ the last bus to Ansan and tottered toward me with her umbrella held open, pushed along by the wind. I had to get home; I didn’t want to crumple to the ground and roll around, contorted like a squid thrown on the grill, in front of a complete stranger.

I couldn’t remember what happened after that. I must have lain down as soon as I walked into my room, without bothering to change. I probably fell asleep snoring. It had been the third seizure I’d had in my life, but this was the first time I’d sensed another one coming so quickly after the last. And this smell was a diﬀerent beast altogether: my skin was stinging, my nose was tingling and my mind was foggy. The episode that was about to come felt like it could be the most intense one yet.

I wasn’t anxious about the seizure’s severity; whether it was a drizzle or a downpour, I’d still get wet. I just wished it would come quickly so that I could be done with it before Mother woke up. I closed my eyes and stayed still. I turned my head to the side to prevent any possible breathing distress. I relaxed my body and breathed deeply. One, two . . . When I got to five, the cordless phone on my bedside table began to ring, jolting me out of my preparations. I flinched, knowing it would be ringing downstairs in the living room too. Mother would startle awake. What bastard calls in the middle of the night?

The phone stopped ringing. The grandfather clock took over and chimed just once in the living room. As well as ringing out on the hour, the clock chimed once every thirty minutes. I reached over to the alarm clock by my bed and peeked at the display: 5:30. Waking early was a legacy from my years of competitive swimming. No matter what time I fell asleep, I would wake up one hour before practice. That meant that Mother must be sitting at the writing desk in her room, reciting Hail Marys to the statue of the Virgin Mary.

After she prayed, Mother would take a shower. I listened for a dragging chair or running water, but all I could hear was the loud ringing of the phone. This time it was my mobile. Maybe the earlier call had been for me too.

I raised a hand above my head and felt along my pillow for my phone. Where was it? On the desk? In the bathroom? The ringing stopped. Then the landline began going oﬀ again. My head jerked up and I grabbed the receiver.

It was Hae-jin. Of course. Who else would be looking for me at this hour?

What a weird question. Did he not come home after his meeting with the movie studio yesterday?

“What? Why would I call if I’m home? I’m in Sangam-dong.” The director of Private Lesson, which Hae-jin had worked on last summer, had found him a new gig, he said. To celebrate signing the contract, they’d gone out for mak-geolli, then they’d gone to a friend’s studio to edit a sixtieth birthday party video he’d filmed during the day, and fallen asleep. “I just woke up and saw that Mother had called in the middle of the night. I thought it was a little weird— she should have been asleep.” He added that he’d thought we would be up by now, but that he’d got worried when nobody picked up. “Everything’s okay, right?”

Mother’s scream rang in my ears. But it wasn’t real—the apartment was silent.

Just then, I realized that something stiﬀ was crusted all over me. “Why wouldn’t it be?” I replied absently as I touched my hardened, tangled hair.

“Why isn’t she picking up, then? She didn’t answer the home phone or her mobile.”

“She’s probably praying. Or in the bathroom, or out on her balcony.” I felt my chest, then my stomach, then my legs. I was still wearing the same clothes from last night but they felt completely diﬀerent. My soft, airy sweater was stiﬀ. My trousers were hard, like raw leather. I raised my foot; that was caked with something too.

I murmured in annoyance. What could be wrong, other than the fact that I was apparently covered in mud? “If you’re so worried, just give her a call later.”

“Okay.” Why was I muddy, though? Had I fallen on my way home? But where was there mud? Had I gone the long way round, past where the new apartments were being constructed? Had I slipped, maybe, as I tried to leap over a flower bed?

“I’m going to take a shower. I’ll be home by nine at the latest,” Hae-jin said, and we hung up.

I sat up, placed the phone back on my bedside table and turned on the overhead light.

“Yu-jin!” Mother’s scream rang in my ears. But it wasn’t real—the apartment was silent. 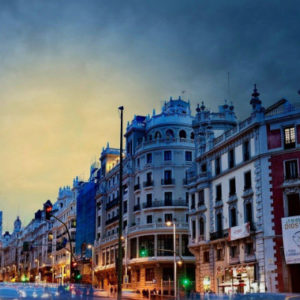 A Spanish Author's Guide to Spanish Crime Fiction Spain is an incredibly beautiful and luminous place. But the more luminous and beautiful a place, the further and darker...
© LitHub
Back to top