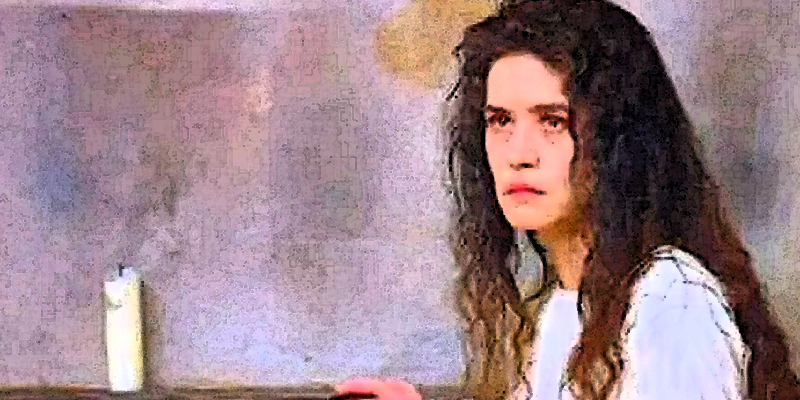 The Gothic Horror of a Post-Roe America

Or, We're All Still Locked Away in Edward Rochester’s Attic...

A decayed and graying landscape. Oppressive, miserable weather. Women who are in constant peril, and the men who put them there. This could easily be the back cover writeup for a classic Brontë novel. It could also describe the summer of 2022 after the fall of Roe v. Wade.

In America, our lives have become a horror story. We watched it happen slowly until it happened overnight. Now, like a character lost in a haunted house, we find ourselves trapped—and unless we can reckon with what brought us to this moment, we might never escape.

These existential dangers, however, are not new. The threat of powerful men is a theme that runs through the heart of gothic literature. From Dracula and Heathcliff to Edward Rochester and Dorian Gray, these characters have an uncanny knack for taking possession of women’s bodies. Whether it’s a bite on the neck or the turn of a key in an attic door, they ensure nobody ever forgets who possesses the power and who doesn’t.

This frightened me terribly when I was growing up. A longtime horror fan, I was always the weird kid who loved creepy movies and creepier books. But for all the monsters I was told to fear, it was the men who brooded in shadows and stalked around their decrepit mansions that petrified me the most. They seemed to be the ones who could get away with anything.

In the gothic tradition, women’s bodies are often treated as disposable, a battleground for unspeakable horror. They become mysteriously ill or go inexplicably mad. Above all else, their fates and their flesh are not their own.

Unfortunately, these fears are not confined to fiction. In a post-Roe America, the quiet part is being said aloud every day, with the GOP making it clear that they’ll never stop legislating our wombs. For them, forced motherhood is gleefully regarded as a form of punishment, a way to correct so-called profane behavior. There’s nothing more threatening to them than women they don’t control.

Perhaps no character from the gothic better exemplifies the GOP’s “dangerous” woman than Lucy Westenra in Dracula. She’s an inveterate flirt who openly laments that she can’t marry three suitors at once. She laughs and cavorts and for the norms of her time, acts like a man—like someone whose freedom is inviolable. There’s a sweet amorality about her that only adds to her charm. Consequently, Lucy is marked for death from the start. After all, why should any wanton woman expect a happy ending?

Lucy isn’t the only gothic character to meet an untimely demise. After being jilted by the title character, Sibyl Vane in The Picture of Dorian Gray swallows poison. In Wuthering Heights, Catherine simply fades away and dies for no clear reason, the Padmé Amidala of gothic literature. Famously described by her husband as “intemperate and unchaste,” Bertha Antoinetta Mason from Jane Eyre succumbs to a fiery death. Together, these women become causalities of their gender, punished for loving too freely or simply loving the wrong man.

The horror genre is rife with these moralistic dichotomies. By now, we all immediately recognize the Final Girl in slasher films, the character who makes smart, respectable choices and therefore gets to live. We also intuitively recognize the Penultimate Girl, the Final Girl’s lascivious friend who makes it through most of the film only to perish before the final reel. Think Tatum from Scream. The logic is apparent: there are women who deserve to thrive and women who don’t.

The Supreme Court is expecting us to respect this distinction, to treat it as a self-evident truth. And there are plenty of people in America who do consider this narrative to be the only one. Act appropriately as a woman, the argument goes, and you’ll be fine. Step out of line, however, and you’ll lose everything in an instant.

There’s a particular scene in Jane Eyre that’s fascinated me ever since I was a twelve-year-old kid watching the Joan Fontaine film on Saturday afternoon television with my dad. Ironically, it’s a scene we never experience firsthand: namely, the climactic fire that destroys Thornfield Hall. It happens while Jane is away, so we learn only fragments about it. Still, if the servant’s account is to be believed, Edward Rochester plays the Byronic hero right up until the end. With his precious estate going down in flames, Rochester races up the burning stairs and manages to get to the smoldering roof where Bertha is waiting. He reaches out for her, ostensibly to guide his burdensome wife back down to safety.

And how does she react to this? Without hesitating, Bertha opts to leap into oblivion rather than accept the help of the man who imprisoned her. It’s perhaps the most telling moment in the entire book. She takes the only way out she can fathom instead of spending one more day locked away from the world. In a society with no good choices, she makes the one that frees her from him.

Something about this scene reminds me of the GOP lawmakers and anti-choice activists who evangelize about how abortion is, in fact, bad for women. Their argument is the same as it’s been for decades, their song and dance as old as disco: that having autonomy over one’s uterus isn’t good for us or for society at large. You can practically write their dialogue for them. Yet every time they’re quoted in a news article or seen beaming on camera at a protest, I see Edward Rochester on a burning roof, reaching out for the wife he drove to the brink, promising her that he offers the best possible prison.

But this so-called madwoman is wise to his tricks.

Other than their tragic deaths, these aforementioned gothic women have something else in common: they’re all cisgendered, and they’re all straight. With the exception of Bertha who’s described as Creole in Jane Eyre, they’re also all white. This is something that many modern readers will notice immediately: the obvious exclusion of anyone besides the privileged few.

But a lack of diversity is hardly limited to Victorian literature. In the immediate wake of Roe’s demise, strange fault lines developed in dubious corners of the internet, with some commentators taking the opportunity to gatekeep who is and isn’t allowed to call themselves a woman or even who’s “permitted” to express their fears for their own wombs, depending on their gender.

These arguments are chilling, in particular when you realize they dovetail with an oft-quoted line from Justice Samuel Alito’s Dobbs opinion. That is, that certain rights aren’t “deeply rooted in this Nation’s history and tradition.” By this rationale, if something hasn’t always been accepted, then it never should be.

The way we’ve historically discussed reproductive rights hasn’t taken into account many of the issue’s nuances. In the past, feminist dialogue has often lacked intersectionality, excluding women of color and members of the LGBTQ+ community who are frequently at higher risk. But that doesn’t mean these conversations have to stay like that forever. On the contrary, the current moment gives us an opportunity to be more inclusive in a way our classic literature simply isn’t. After all, just because something isn’t “deeply rooted” in tradition shouldn’t stop us from seeing the humanity in all of us and the ways that so many people’s rights are being rapidly stripped away.

Here in America, Thornfield is currently on fire. We need to stick together if we’re going to survive the flames.

Despite all odds, there are many happy endings in gothic literature. Dracula is dispatched by a Texan. Dorian Gray destroys his own portrait. Jane Eyre settles into the family life she always craved. Even Heathcliff and Catherine’s ghosts are seen together in the end, while Catherine’s daughter at last finds true love.

So if even the grimmest corner of classic literature can give some of its characters a fighting chance, does that mean we can still earn a happy ending too? And if so, what’s the path forward from this moment?

It’s hard to say, of course. We’ve already lost our way, and the world is only getting darker. But if nothing else, I take comfort in Mina from Dracula. Despite immense loss, she does what Van Helsing and the others fail to do: she pieces together their journals and helps to unravel the mystery of Dracula. In a turn of genius and empathy, Mina wisely realizes that working together is the only chance we’ve got.

But not everything from the gothic is quite so comforting. Bertha’s fate in Jane Eyre poses a painful question: can we burn down the landscape that oppresses us without immolating ourselves in the process? Is there a way to emerge from this with our rights, our bodies, and our spirits intact? Or has the fire of Thornfield already spread too far?

I wish I knew the answer. I wish I could offer some solace, at once to others and to myself. But this moment is fraught and uncertain. Right now, we’re desperately navigating that dim and dingy attic in Thornfield, trying to regain our bearings, wanting to believe it’s not too late.

But like the men of gothic literature, the GOP won’t make it easy. The odds are stacked in their favor, and no matter what we do, they’ll keep rising over and over.

But here’s the truth: so will we. Maybe that’s what keeps us reading the gothic: the reminder that despite the darkest moments, there is still a way out, and this world is still worth fighting for.

The story isn’t over, not by a long shot, and we don’t know our ending yet. But thanks to more than a century of gothic tales, if we must burn it all to the ground, at least we know we won’t be the first to try. 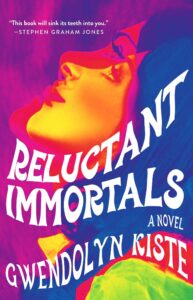 Gwendolyn Kiste is the Bram Stoker Award­-winning author of The Rust Maidens, And Her Smile Will Untether the Universe, Pretty Marys All in a Row, The Invention of Ghosts, Boneset & Feathers, and Reluctant Immortals. Her short fiction and nonfiction have appeared in Nightmare Magazine, Tor's Nightfire, Vastarien, Black Static, Daily Science Fiction, Unnerving, Interzone, and LampLight, as well as Flame Tree Publishing's Gothic Fantasy series, among others. Originally from Ohio, she now resides on an abandoned horse farm outside of Pittsburgh with her husband, two cats, and not nearly enough ghosts. You can also find her online at Facebook and Twitter @GwendolynKiste. 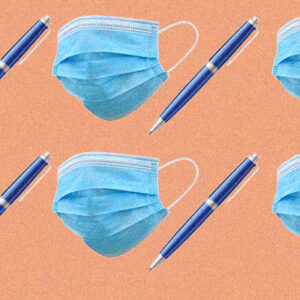 A deadly airborne virus ripping through the population. Government mandated quarantines and mask requirements. Overwhelmed...
© LitHub
Back to top