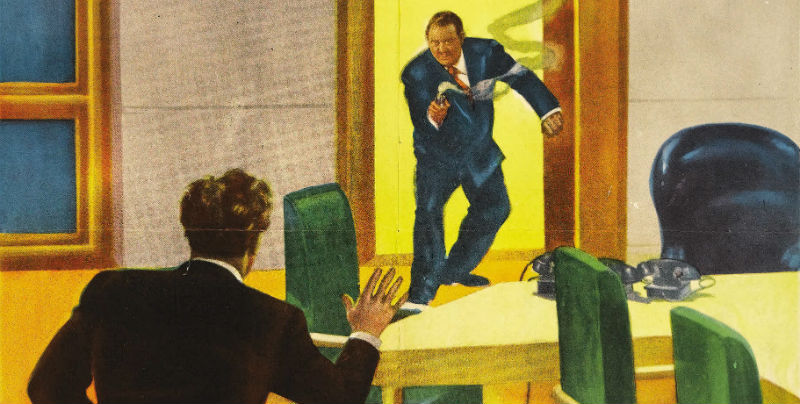 The Greatest Crime Magazine That Never Was

Remembering 'The Big Clock' and Its Crime-Solving Editors

There is a certain publication I would gladly go to work for over most others. Not the hard-drinking Harold Hayes-era Esquire, or Breslin’s Daily News, with its smoke and banter, or even Life in its photographic prime. My dream magazine never saw print or even cut a paycheck yet remains tantalizingly real: It’s the magazine where George Stroud works as executive editor, Crimeways, in Kenneth Fearing’s 1946 suspense novel The Big Clock and in the movie adaptation, where George is played with indomitable smoothness by Ray Milland.

Crimeways is no tabloid trafficking in sloppy murder shots captioned with lurid puns. It is one of a number of publications from Janoth Enterprises that fill the top nine floors of the Janoth Building in Manhattan: Newsways, Futureways, Sportland, Frequency (radio & TV), Fashions, The Frozen Age (food products), Commerce Index, The Sexes (love affairs, marriages, break-ups). Crimeways occupies the Janoth building’s 26th floor, where George Stroud has an office among the magazine’s other editors and six staff writers. “In theory we were the nation’s police blotter,” Stroud explains, “We were diagnosticians of crime; if the FBI had to go to press once a month, that would be us.” All they want to do all day is read and write and argue about crime, and regularly solve one too.

Far more than banner headlines and semi-colons are at stake when the editors get together. During a typical meeting, Stroud says with pride, “a quadruple slaying on a lonely farm would become a penthouse shooting in Chicago….sociological research would produce new parole-board reports, novel insurance statistics.” But mere crime news is not enough to get into an issue if it breaks no ground. When the latest spectacular bank heist is proposed in a story meeting, an inside job that was years in the careful planning, it is shot down as just more cops and robbers: “Attack catching up with defense, defense overtaking attack, that is the whole history of crime,” says one of the editors, with jaded expertise. Likewise, the average crime of passion is fodder thrown to  The Sexes magazine on a lower floor, and does not rise to the high standards of the Crimeways ‘book.’

Beyond the stories, each month the Crimeways staff applies its “collective virtuosity” to  solving a real crime, deducing together with a clue board in a hybrid of a homicide department roll call and an editorial cover meeting. In previous issues, Stroud and his staff have found a missing financier by tracing his frauds using Janoth’s sizable auditing and legal departments. In another case, they rummaged the Janoth publications morgue to solve a murder ahead of the cops. “What we decided in that room,” Stroud assures, “more than a million readers would accept.”

You would have to really screw up not to enjoy yourself working at Crimeways, and that is exactly what George Stroud does. But it is not for any editorial reason that his job takes its terrifying turn: Though married and due home, he stays too long at the Silver Lining bar one evening talking to a woman named Pauline Delos. On the one hand, Pauline has also been seeing a lot of George’s boss and publisher Earl Janoth (played in the film with fleshy malevolence by Charles Laughton and his marvelously patchy mustache). But to George, she looks “blonde as hell, wearing a lot of black,” and they discover mutual feelings of resentment toward Janoth while sharing an apple brandy sidecar. As they continue to drink, their plans mistily converge into a rented flat where, Stroud says, “I found out again why we are on this earth.” Stroud and Pauline have a brief affair, including a memorable weekend in Albany. (In the film, adapted by the crime writer John Latimer, Ray Milland seems to merely fall asleep on her couch after a night of drinking, unforgivably missing the train for his long-postponed honeymoon in the country.) 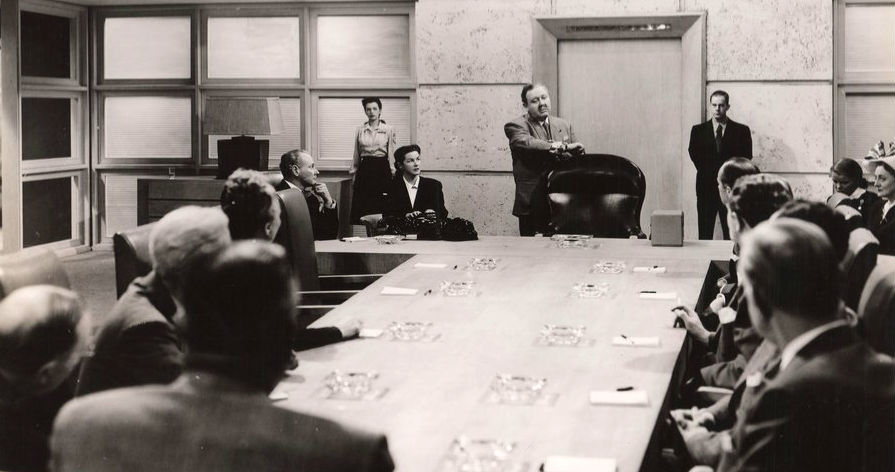 It is the old noir plot of the man touching a stove he knows to be hot, but then Janoth assigns Stroud and his crack Crimeways staff to “solve” Pauline’s murder. The suspect they seek is a mysterious unnamed man with whom she was seen that night—Stroud himself. All the investigative talent housed in the Janoth building is suddenly closing in on Stroud, who must both pretend to lead his staff and yet elude them while proving his innocence. In the film, Ray Milland watches a grim mockery of his editorial method as bits of gathered knowledge are added to the magazine’s trademark “Board of Irrelevant Clues” and his staff fleshes out its mystery man.

Kenneth Fearing, best known as a hard-boiled poet (“Confession overheard in a Subway”) had worked for both Newsweek and Time before he set this novel at a magazine empire not unlike that of Henry Luce’s Time Inc. (His 1941 murder story, Dagger of the Mind, took place in a Yaddo-like writers colony.) Speaking about the Luce-like Janoth Enterprises, George Stroud describes the conformity and thwarted ambitions that make its engine run: “…the whole organization was full and overrunning with frustrated ex-artists, scientists, farmers, writers, explorers, poets, lawyers, doctors, musicians, all of whom spent their lives conforming, instead. And conforming to what? To a sort of overgrown, aimless, haphazard stenciling apparatus that kept them running to psychoanalysts, sent them to insane asylums, gave them high blood pressure….Why should I pay still more tribute to this fatal machine?”

Kenneth Fearing himself left Time’s ‘stenciling apparatus’ to write his most commercially successful work. When it first appeared, some critics were frustrated by his rotating the narration among his various characters (as in his earlier books), claiming it slowed down the plot. But The Big Clock benefits from George Stroud getting a head start narrating for its first five chapters and being the main storyteller overall. Trapped by a manhunt inside his own office building, Stroud says, “I could beat the machine…The super-clock would go on forever, it was too massive to be stopped. But it had no brains, and I did. I could escape from it.”

Perhaps I have taken the wrong lesson from Fearing’s book: Brilliant editors and even founder-publishers can be replaced, but the beautiful crime magazine George Stroud runs in The Big Clock is too good for this world. 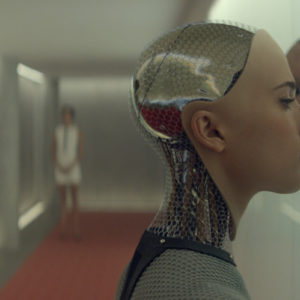 The Past In the superhero extravaganza, Avengers: Age of Ultron, the villainous Ultron blossoms to life in a haze of confusion....
© LitHub
Back to top