The crime and espionage author Frédéric Dard is without doubt the most prolific and widely read Francophone writer with whom hardly anybody in the English speaking world, even serious crime genre aficionados, is acquainted.

In the second half of the 20th century—he began writing seriously after the end of WWII and continued until his death in 2000—Dard produced over 300 novels. But only a tiny number have ever been translated into English and then invariably by hard-to-track-down small specialist presses. However now, thanks to Pushkin Vertigo, Dard is being translated and made widely available. Commissioning ardent fan and Dard translator and editor at Pushkin Vertigo in London Daniel Seton says that the first three translations have been extremely well received by the crime reading community. Perhaps now Frédéric Dard will take his place alongside George Simenon as one of France’s greatest exponents of crime fiction in translation?

The comparison with Simenon is always made when Dard is discussed. And it’s a valid one. Both had a massive output by any standards—Simenon probably wrote more books, but once you’re into the several hundreds who’s counting!? Simenon created the enduring character of his Parisian flic Maigret; Dard his series featuring French secret agent San Antonio. Dard’s characters worked as hard as he did: San Antonio foils plots by international criminal masterminds in an estimated 173 novels; by comparison Ian Fleming and Bond only managed a paltry 13 novels and a handful of short stories. However, it’s unlikely San Antonio is about to rival Bond for English readers. Seton says the novels are effectively untranslatable: super-slangy, ultra-staccato and redolent of the work of the now hopelessly politically incorrect Louis-Ferdinand Céline.

French readers have not been overly interested in just how a Simenon or a Dard achieved their massive output. They just want more; they are the beast that must be fed. You’d be hard pressed to find a French household without a decent smattering of Simenons and Dards. Dard, like Simenon, was at it day after day, from early morning till late night—both men would have fallen seriously afoul of France’s working week limitations. Dard’s books, like many of Simenon’s darker psychological romans durs (literally “hard” novels) and the later works of Jean-Patrick Manchette (think of his 1981 thriller The Prone Gunman, or La Position du Tireur Couché, but not please the recent movie adaptation, The Gunman, with Sean Penn) are purely character- and plot-driven. They push on towards the end not worrying too much about finer details. This ensures they are engaging, but also that they don’t require the authors to invest vast amounts of time researching. Perhaps they don’t require too much from the reader either – Seton believes that their frantic pace, which allows you to dash through them at a single sitting, is a strength.

Or consider Dard’s 1956 novel The Wicked Go To Hell (Les Salauds vont en enfer), now available in a new English translation by David Coward from Pushkin Vertigo. We are told at the start that a spy will not confess to the authorities despite torture; that he is to be sent to prison; that an undercover policeman will befriend him posing as a fellow inmate; that they will jointly plan an escape; that the spy will then lead the cop to whoever is his master. It’s a compelling plot idea, although we never learn who exactly the spy works for, what secrets exactly he has stolen, who exactly is trying to catch him. There’s none of that time-consuming research stuff about organizations, ranks, accurate descriptions of conditions and so on. The story simply powers on for 150 pages or so. The conceit is that until the end we are never sure which of the two men in the jail cell—Frank and Hal—is the spy and which the cop.

Perhaps Dard’s lack of detail is telling—the man himself was invariably so busy writing another half a dozen novels a year under his own name, and perhaps a half dozen more under various aliases, that he rarely stopped to analyze what he was doing or to share that analysis with the media. Invariably, in both the San Antonio series and the stand-alone novels, like The Wicked Go to Hell, the state is a shadowy figure; its enemies shadowier and unidentified; torture and beatings are routine; the justice system absent in any formal sense; accountability non-existent. In the last two decades of rendition, black ops, media blackouts, Guantanamo and now somewhat vague repeated Executive Orders, these dark noirs, emphasizing a lack of accuracy and accountability, feel very contemporary.

Perhaps it’s the case that it was always thus? The Wicked Go to Hell was written several years into the Algerian War of Independence (1954-1962), a particularly dirty colonial liberation struggle. That war saw a spate of extra-judicial killings by the French State, not just in North Africa, but in the heart of Paris with the 1961 killings on the Saint-Michel bridge of protesting Algerians. In 1988 the French State finally admitted to the extra-judicial killing of 40 Algerians in France—campaigners believe the number was closer to 300. This then is the backdrop to much of Dard’s work, and also to other French writers of later generations, such as Didier Daeninck’s Murder in Memoriam (Meurtres pour mémoire), published in 1984 but dealing with the tragic events of 1961. And it all comes barely a decade after the end of the German Occupation of Paris and the collapse of the pro-fascist Vichy regime of Marshal Pétain. Dard, like Simenon, lived through the Occupation and the messy business of resistance and collaboration. France’s liberation in 1945 appears to merge, almost seamlessly at times, into the messy business of decolonization and the disasters (for the French State at least) of Dien Bien Phu and Indo-China, Algeria and North Africa, Madagascar and sub-Saharan Francophone Africa.

Another side of Dard is present in Crush (Les Scélérats) originally published in 1959, now in a new English translation by Daniel Seton. It’s a first-person narrative told by Louise, a bored teenaged factory worker in a dreary Paris suburb, who becomes obsessed with an American couple and eventually gets a job as their maid. Her town is a Franco-Belgian Nowheresville, familiar from many of Simenon’s roman durs—bourgeois, boring, small-minded, incestuous and aesthetically dull. Yet the element of obsession, and the ménage-a-trois at the heart of the suspense are more redolent of a book that influenced Dard as well as many French authors (and movie directors), including Camus, Jean Renoir and Simenon—James M. Cain’s 1934 novel The Postman Always Rings Twice. That novel, like Simenon’s roman durs and the star of the next generation of French crime writers, Jean-Patrick Manchette (particularly perhaps 1997’s Fatale) are not the La Belle France of the Parisian boulevards, the Côte or the Provence countryside (though Dard was originally from the quite pretty town of Bourgoin–Jallieu near Lyon in the southeast of France; and Simenon was from the slightly more industrial Belgian city of Liège). Rather these authors prefer the nondescript and drab semi-industrial northern French flatlands flying past on the Eurostar from Calais to Paris.

The third of the trilogy of new Dard translations published by Pushkin Vertigo (and more are promised later this year) is Bird in a Cage (Le Monte-Charge), originally published in 1961 and now translated into English by the prolific translator and Princeton Professor of French Literature, David Bellos. Of the three novels perhaps Bird is the most redolent of a wider French existentialism and could still easily be mistaken for a later Simenon or possibly an early Manchette. It’s once again a French Nowheresville, a newly released prisoner returning home on Christmas Eve—”My old quartier! Its smell of wet soot and cooking oil! Its wobbly paving stones! Its dreary frontages! Its bars! Its stray dogs that the pound had given up trying to catch!” (Dard is a great lover of the exclamation mark—few authors today would get anywhere near as many past even an average editor!). In common with The Wicked Go to Hell and Crush, Bird in a Cage is a short novel, low on specific detail, high on character and pace though still, like Cain’s classic, it maintains a slow burn, holding back “the reveal” (as they tell you in screenwriting class) thereby ensuring the tension is maintained, but not for so long that you wander off.

Dard remains a staple of French bookshelves and perhaps his spirit still permeates. The sudden upswing in quality long form TV from France (led by the Paris policier Engrenages, as well as crime shows such as the Corsica-set Mafiosa) includes Braquo and Flics, both shows that follows a group of police—we’re never really sure of their rank, their division, the precise locale of the rather slummy and drab Paris suburbs they operate in or even who they answer to, but the shows move, like many a Dard novel, at 100 kilometers an hour and never really pause for breath. They’re exhausting to watch, but exhilarating and, were he still alive, I suspect that this is just what Dard would probably be churning out at his former hectic rate. 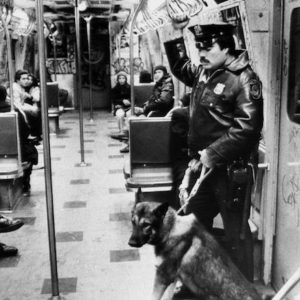 The Victim's Song, published 32 years ago by the literary critic and SUNY-Cortland English professor Alice R. Kaminsky,...
© LitHub
Back to top