In 1996, the internet was young, and nobody was much concerned with Erzsébet Báthory, a Hungarian countess who lived and died and possibly murdered hundreds of servant girls at the turn of the seventeenth century. Nobody, that is, except for 47-year-old Dennis Báthory-Kitsz, who wanted to write an opera about her. He’d been gathering material—an outline, a bibliography, and a few photographs from a trip to one of her castles. To organize it all, he set up the website bathory.org. It was meant to be a private corner of the internet for Dennis to collect his thoughts—“essentially a document,” he says. But then the fangirls arrived.

On the surface, Erzsébet Báthory’s intrigue stems from allegations that she bathed in virgin blood and slaughtered 650 nubile servant girls. Her legend has become extraordinarily sensationalized; looking at Erzsébet-themed fan art, one would be forgiven for presuming that she favored plunging necklines, heavy eyeliner, and laughing maniacally while bats swarmed around her naked body. Dig a little deeper, though, and her story becomes more ambiguous. Erzsébet was an enormously powerful woman whose psyche seemingly began to splinter in her early 40s, when her violent warrior husband died and she was left to run their massive estates alone. For years, rumors about her proclivity for torture swirled through the small towns around her estates; eventually, a raid on one of her castles revealed servant girls in various stages of dying. Erzsébet’s servants confessed under torture that the Blood Countess liked to do everything from whip to beat to stab to rip off fingers, and based on those confessions, Erzsébet was walled into her own bedroom until she died. But then there are those who believe that the whole thing was a show trial and that Erzsébet was framed by a Catholic king who was in her debt, who disliked her Protestant religion, and who couldn’t bear the thought of a woman being quite so mighty.

Dennis wanted to write an opera about all this not just because it was dramatic, but because his grandfather had always claimed that they were related to Erzsébet. As a teenager in an era when goth wasn’t a thing yet, Dennis had never been all that interested in his dreadful ancestress. “It was this weird little family thing…it was totally unimportant,” he says. But that changed in 1983, when writer Raymond McNally published a book called Dracula Was a Woman, which argues that Bram Stoker was so inspired by Erzsébet’s alleged propensity for bathing in blood that he based Count Dracula off of her story. Once Dennis read McNally’s book, he began dreaming of writing libretti.

“There was no interest in making [bathory.org] a fan site or anything like that,” says Dennis. “But people started to contact me.” They would send him their own biographies of Erzsébet, riddled with errors. They’d send him fan art, and beg him for directions to her most famous castle, called Čachtice (it lies in ruins in Slovakia, but it’s open to tourists). When Microsoft’s MSN.com linked to the site as part of their annual celebration of International Women’s Week, “the hits just went through the roof.” The site drew hate mail, too, especially from Slovakia. But the strangest and most insistent letters were the ones from the hundreds of teenage girls who wrote to him in tones of dreamy longing, aching for some sort of connection to this woman who—oddly, unexpectedly—seemed to inspire them.

“I have an uncanny resemblance to the countess,” wrote a girl named Christina.

“I do believe that I actually Understand her now,” wrote Silvir.

“I’m the only person I know at my school who even knows about her,” wrote Rebecca.

“You have to realize how weird it was,” says Dennis. “When I put up the website, I was a 47-year-old guy getting fan mail from teenagers about this topic. By and large, I thought it was really odd. I’m just sort of a normal person, and they’re all like, I am Erzsébet, I have come for you-u-u.”

One of the first to contact him was Eurydice Georgiou, a then 16-year-old teenager from Greece. In 1998, she’d discovered the concept album “Cruelty and the Beast” by Cradle of Filth, which is based on Erzsébet’s story. (The Blood Countess is a perennial source of inspiration for metal bands, several of which are named after her.) Eurydice’s fascination with Erzsébet was immediate and immersive, and she began scouring the internet for more information.

“Back then I didn’t own a computer or have internet at home,” she says, “so I was always going to those internet cafes and making copies of her biography and every picture I could find of her.” When she stumbled across bathory.org, she was intrigued by Dennis’ connection to the Countess, and sent him a photo of herself and an email that ended “[MY] SOUL WITH HERS TO PEACE OR HELL FOR COMPANY.” The two of them began a correspondence. Her second email to him is still on the website, a relic of both teenage fixation and the particular candor of the early internet, when a 16-year-old girl could email a man in his late 40s about a serial killer and it didn’t have to be weird.

“Elisabeth has been an obsession of mine for the last two years,” runs the email. “I feel her like I have been known her for ages…All of my friends find it very strange that I like her so much…I see her form in my dreams and I know that she was pretty unhappy for the fact that she would lose her beauty…Please, I would like to know more…and why do I feel her so much?” Dennis sent her a book and a t-shirt with the Báthory family crest on it. Many years later, when Eurydice created her first Facebook account, she decided to look up Dennis and see if he remembered her. They’re friends to this day.

Perhaps these girls, without all the quick-hit feminist resources that today’s internet provides, saw in Erzsébet some twisted version of what female agency could look like.

Dennis believes that teenage girls are drawn to Erzsébet because of her combination of “gothy-ness and power.” Perhaps these girls, without all the quick-hit feminist resources that today’s internet provides, saw in Erzsébet some twisted version of what female agency could look like. They certainly tried to figure her out—“understanding her” was a perpetual theme in their emails. “I don’t think E wanted death for the victim,” wrote one fan named Sarah. “She wanted to be the center-like god, rule over a life.” The allure of Erzsébet’s power still shows up on fan sites today; one Facebook group tried, for a while, to sell hand-painted Czech glass Christmas ornaments with the hashtag #BathoryGotBalls.

In fact, Erzsébet is making a lot of people money these days. Dennis noticed that the hate mail from Slovakia slowed once “they realized that she was kind of a cash cow for them.” The town of Čachtice has embraced her legend with open arms and poured good money into restoring her castle; years ago, Dennis asked the mayor how she felt about the bloody stain of the Countess’ legend, and the mayor replied, “Just fine. She’s ours now.”

She’s the internet’s now, too, and bathory.org played no small role in that. “There’s so much fantasy about her right now,” Dennis says. “There’s the Erzsébet dolls and little ceramics of her in the bathtub—thousands of things.” On Etsy, you can by a Báthory moisturizing mask, a Báthory ouija board, and a “Báthory Blood Red Rose Scented Vampire Bat Shaped Bath Bomb” (guaranteed to be “the perfect gift for a Goth in your life”). Many of the products and blogs and articles about her use Dennis’ work without realizing it. The slightly ominous red-brown painting of Erzsébet that’s everywhere on Google Images is actually a photo that Dennis took of the painting when it hung a museum in Čachtice. He knows it’s his photo because of a slight crop he made to the bottom. The Báthory crest that appears on shirts and rings and tattoos—three menacing wolf-teeth topped off with a crown—was restored by Dennis. “And now people put it on mugs,” he says.

In 2011, Dennis’ opera finally premiered in Burlington, VT. Onstage, his Erzsébet sang lines like, “Beauty and blood and song and heaven are one! / Sing to me, scream to me.” Dennis would love to put on the opera again—perhaps in Hungary or Slovakia, in one of the little towns where she struck fear into so many hearts—but he needs a patron first. Someone clever and powerful and rich, maybe; someone a little bit like his ancestress.

For now, though, thanks to his work, she lingers on the internet, staring out at us with eyes that have never been proven, conclusively, to be hers. The image of her that’s most recognizable is just a copy of a photo of a painting of a long-lost original. But that’s just fine. She’s ours now. 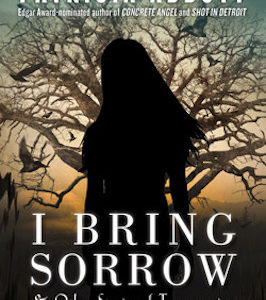 “It is easy to take liberty for granted when you have never had it taken from you.” Lou’s last meal at Jackson was on the night...
© LitHub
Back to top