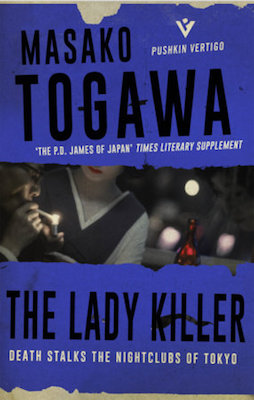 The following is an exclusive excerpt from The Lady Killer, by Japanese crime writer, actress, singer, and queer icon Masako Togawa. In the following passage, we learn of a young woman’s untimely demise.

Last of all, the calloused finger that should one day have worn a wedding ring slipped and lost its grip. All contact with reality lost, she plunged to the earth below.

The shattered body of Keiko Obana, aged nineteen, a keypunch operator working for the K Life Insurance Company, was found by the side of the building by a security guard working for that company just after 1 p.m. on Adults’ Day, January 15, a public holiday.

Was it suicide? Or was it, perhaps, murder? There was much discussion until the police announced their conclusion. After the autopsy they declared that it was suicide caused by neurosis. They found that her ring finger exhibited a mild case of tendonitis, the occupational disease of key-punch operators.

The evidence of the security guard was that, although it was a holiday, he had let Keiko Obana into her office as she had said that she wanted to copy some sheet music for her choral group. The official view of the company was naturally to deny the possibility of suicide, for there was no sign of a suicide note. The room had been sprayed with a strong insecticide shortly before; Keiko must have tried to open the window, they reasoned, and had fallen to her death.

However, the police had two reasons for determining that this was a case of suicide. Firstly, there were the marks on the windowsill, which clearly showed that she had hung from it before falling.

And secondly, there was evidence that was not made public.

At the time of her death, she was six months pregnant.

Although that would have convinced everybody that the police were right, not a word was allowed to leak to the press on this point. This decision was made by the section chief in the local police station who was in charge of the Keiko Obana case. He did so on grounds of delicacy, and the only person to whom he revealed the fact of Keiko’s pregnancy was the sole surviving relative, her elder sister, when she came to receive the body.

“Did she have a fiancé or anything like that?” he asked in a roundabout sort of way. The sister sat opposite him, wringing her handkerchief between her hands.

“No, not that I was aware of. She never said anything about getting married. She never even mentioned a boyfriend. Of course, she may have kept silent out of deference to me; I am still single, you see. But… you know, she was still very much like a child.”

The sister looked up at the police officer dubiously.

Last of all, the calloused finger that should one day have worn a wedding ring slipped and lost its grip. All contact with reality lost, she plunged to the earth below.

“You were like a mother to her, were you not?”

“Yes. Both our parents were killed by the atom bomb at Hiroshima. I brought her up and supported her from my income as a dressmaker. She fully understood how hard it was for me, and always did her best not to cause me any worry. And I think she always told me everything.”

To lose one’s only sister in this way was indeed tragic, thought the inspector, and he tried to temper his questions as far as possible.

“Did you notice anything special about her?”

“What do you mean? Is there something I should know?”

She looked at him uncertainly.

“Well, for instance, did she occasionally stay out all night?”

“Oh, no, never… but yes, once only. She came home in the morning and said that she had missed the last train and had spent the night at an all-night café with a friend.”

“About when would that have been?”

“Well, let me see… about six months ago, I think it was. But does that have any bearing…?”

“Well, yes, I’m afraid it does. I’m sorry to have to tell you this but your sister was pregnant.”

The sister’s eyes almost popped out of her head with shock.

“I can’t believe it,” was all she could say.

“She was, in fact, six months pregnant. I think the worry made her kill herself.”

“Yes. She was, in fact, six months pregnant. I think the worry made her kill herself.”

Tsuneko Obana burst into tears. The inspector averted his eyes; it had been hard for him, but he felt he had to tell her. He gazed out of the window. If Keiko had been a respectable young woman, as seemed to have been the case, if she was a girl with no boyfriends who came home every night, then on that night she spent in the all-night café she must have been seduced by a gangster or some such person. There were only too many such cases of which he was aware. Normally, they were about as emotional as traffic accidents, but in this case the girl had killed herself. What could he say to soothe the sister now that the truth was out? Nothing. He turned his gaze back upon the sister.

“Naturally, the police are only informing you of this fact.

I can assure you that it will never be made public.”

After all, he reasoned, if the suicide could be attributed to a vocational disease, then the relatives could claim compensation.

Tsuneko Obana dabbed her face with her handkerchief, trying to repress her tears. Suddenly, she looked up and began to speak urgently, as if a dam had broken inside her.

“She did have a lover… I read her diary… She met him in a bar… and they sang ‘Zigeunerliedchen’ together… How could she be so stupid?… Poor, foolish girl…”

There was nothing he could say, the inspector thought, as he listened to these disjointed statements. He stood up to bring the interview to an end. The sorrow of bereaved relatives does not lie within the jurisdiction of the police.

“Well, that is all, Miss Obana. I have no more questions to ask you.”

As she collected her belongings and made ready to go, he noticed for the first time that she had a very distinctive mole on the edge of one nostril. It had been hidden by the handkerchief, but now he could see it clearly. She caught his eye, and, embarrassed by his rudeness, he quickly looked away.

“I am sorry for the trouble you have been caused.” The sister mouthed the appropriate formula, but left the police station looking overwhelmed with grief.

As he watched her leave, the inspector was seething with anger. He felt his chest tighten with rage against the unknown man who had so casually made a nineteen-year-old girl pregnant. The fact that the man was unknown made his pent-up wrath the greater. If it was my daughter, he thought, I would hunt the man down, root him out, and give him just punishment for such a crime.

Of course, in such a case, it would be at least as hard to find the man as to identify a murderer. The thought depressed him. There was really nothing that could be done; he began to regret that he had told the sister, so pointlessly, of Keiko’s pregnancy.

From THE LADY KILLER, by Masako Togawa, translated by Simon Grove. Used with the permission of the publisher, Pushkin Vertigo. Copyright © 2018 by the estate of Masako Togawa.

The Crime Fiction of Barcelona 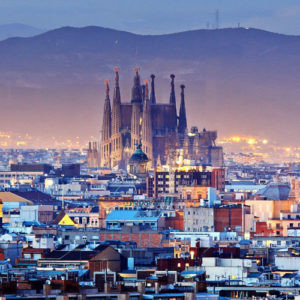 The Crime Fiction of Barcelona If the country’s crime writing is anything to go by then Spain is haunted by ghosts. These ghosts are what remains of the terrible...
© LitHub
Back to top