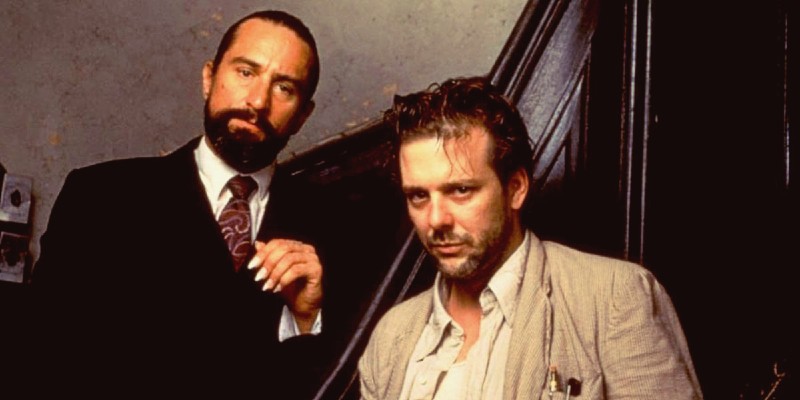 Revisiting the 'Angel' novels and their occult obsessions

‘Now I knew what Krusemark had told me was true,’ muses the re-emerged Johnny Favorite early in William Hjortsberg’s posthumously published novel, Angel’s Inferno. ‘I ate Harold Angel’s heart. Some innocent young GI flesh out of a VA hospital. Picked him up in Times Square, New Year’s Eve, 1942. Two dogfaces on leave sharing a few brews. Got the kid drunk and took him back to his apartment at the Waldorf Towers. Killed him in a secret ceremonial room. Some black magic soul switching ritual…I became Harry Angel for the next 16 years. My secret life as a gumshoe. Didn’t do me a lot of good in the end.’

Just published for the first time in paperback by Britain’s No Exit Press, Angel’s Inferno continues the story of the down at heel private detective who takes a routine missing person case and becomes ensnared in an occult nightmare. Only Angel is now Favorite, the amoral crooner who sold his soul to the devil for fame, then stole Angel’s identity in an attempt to evade payment. And he’s in Paris, determined to hunt down and exact revenge on Lucifer’s earthly manifestation, Louis Cypher. 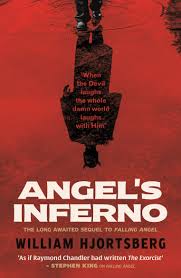 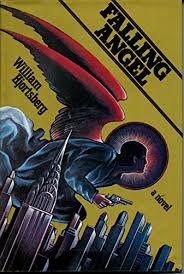 Hjortsberg is not the only writer whose lengthy literary career is overshadowed by a film version of one of their novels. In this case, British director Alan Parker’s 1987 supernatural neo-noir, Angel Heart, based on Hjortsberg’s 1978 book, Falling Angel. One of eight novels he had published while alive, Hjortsberg’s output was diverse, ranging from his debut, Alp, a comedic fantasy published in 1968, to his 2015 thriller set amidst the hippie drug culture in 1960s Mexico, Mañana. He also wrote non-fiction and had a profitable side-line penning screenplays, including Roger Coreman’s car chase comedy, The Georgia Peaches (1980), and Ridley Scott’s Legend (1985), a dark fantasy featuring a young Tom Cruise, Mia Sara and Tim Curry.

Angel Heart starred Mickey Rourke as Angel, the low rent private dick, engaged by the mysterious businessman Cypher (played by Robert De Niro, although Jack Nicholson and Marlon Brando had also been envisaged for the role) to locate Favorite. Favorite’s career as a successful singer was disrupted by wounds suffered while performing for troops in North Africa, leaving him with severe facial trauma and amnesia. Favorite’s incapacity interrupted a contract he had with Cypher, involving unspecified collateral that the businessman is keen to retrieve. Angel quickly uncovers that a doctor in the private hospital where Favorite was supposedly being treated has hidden that he was checked out by persons unknown many years earlier. Angel also discovers Favorite had a wealthy fiancé named Margaret Krusemark, and a secret lover, a Black woman named Evangeline Proudfoot. Both leads send Angel to New Orleans, where he meets Margaret (Charlotte Rampling), a fortune teller who tells him Favorite died years ago. He also locates a young woman, Epiphany (Lisa Bonet), the singer’s daughter by the now deceased Evangeline Proudfoot.

Signs of the occult, black magic and voodoo start appearing. People also start dying. First the doctor in an apparent suicide. Next Margaret, who Angel finds with her heart cut out with a ceremonial knife, then a blues guitarist and Favorite’s former bandmate, whose throat was slit with a razor. Angel’s proximity to the murders makes him the main suspect in the eyes of the New Orleans police. He engages in a torrid sexual relationship with Epiphany and has increasingly graphic supernatural themed nightmares. The pieces of the mystery fall into place when Angel confronts Margaret’s father, Ethan Krusemark, a powerful businessman and Satanist. Before being drowned in a vat of boiling gumbo, Krusemark reveals that Favorite was indeed a powerful black magician who sold his soul to Satan in return for fame and switched bodies with a young soldier, Harry Angel, to avoid payment. Drafted, sent overseas and returned wounded and amnesic, the Krusemarks took Favourite out of the hospital and abandoned him on Times Square in New Year’s Eve 1943. Angel realizes not only has he been committing the murders as Favorite, but that Cypher is the devil come to claim his soul. The film concludes with the traumatized Angel in his hotel room, looking at the body of Epiphany, whom he has also brutally murdered. “You’re going to burn for this, Angel,” says a cop. “I know,” replies Angel. “In Hell.”

The rights to Hjortsberg’s novel were optioned by Paramount soon after it was published, with Robert Evans to produce and John Frankenheimer as director. When this plan fell through, it was picked up by Robert Redford, before eventually falling into the hands of independent producer, Elliott Kastner, whose credits had included Where Eagles Dare (1968) and Robert Altman’s The Long Goodbye (1973). The film was something of a departure for Parker, whose output until then had shown a strong musical theme, Bugsy Malone (1976), Fame (1980) Pink Floyd: The Wall (1982)—although he had also helmed the gritty 1976 prison drama, Midnight Express. Parker said in a 2018 interview at the British Film Institute that he was initially attracted to the project by the novel’s strap line, ‘Raymond Chandler meets The Exorcist’. A critical and commercial success, Angel Heart’s strength derives from how its fuses the familiar noir trope of the hard-drinking gumshoe who takes an apparently simple case that warps into something far more complex and dangerous, with a genuinely disturbing horror element. As he unravels on the screen, Rourke’s Angel bristles with the eighties masculine Id he portrayed so successfully in films like Rumble Fish (1983) and Nine and a Half Weeks (1986). De Niro is also excellent as the malevolent Cypher. The other elements fit together well: the ominous supernatural imagery; the soundtrack, a wailing sax that so many films from that decade used mixed with snatches of period music; the atmospheric Louisiana setting; and, of course, plenty of sex. The latter includes the controversial scene in which Rourke and Bonet—until then best known for her role on the family-oriented sit com The Crosby Show—engage in frenzied copulation while blood pours from the ceiling. 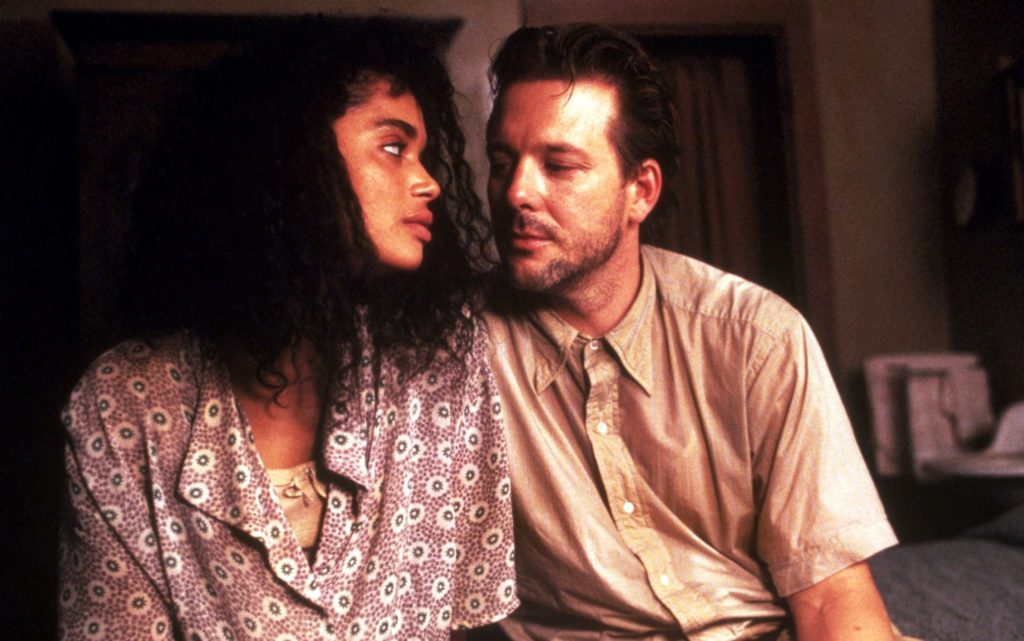 Supposedly influenced by Stephen Vincent Benét’s 1936 short story, ‘The Devil and Daniel Webster’, about a New Hampshire farmer who sells his soul to the devil and is defended by Daniel Webster, a fictional take of the famous 19th century American statesman and lawyer, Angel Falling is in many respects far more satisfying than its film version. The novel takes place completely in 1950s New York and is imbued with a wonderful sense of the mid-century’s fascination with the paranormal and outré, not just the occult, but fortune tellers, seances, carnivals, flea circuses and freak shows. Angel is a far more sympathetic character. Cypher is also very different, still the devil but not as overtly demonic, more of a trickster and con man. At one point, Angel finds him performing as ‘The Mysterious Dr Cypher’ in a low rent cabaret on 42nd Street. Another major difference is Epiphany. ‘A beautiful, strong West Indian woman,’ she owns Proudfoot Pharmaceuticals, the business started by her mother, and is a more sophisticated and well-rounded character than her sexpot film iteration. Epiphany practices voodoo but professes to be a white witch. And while she becomes Harry’s lover, she is also his partner, educating him on New York’s hidden occult world.

Hjortsberg was born in New York in 1940. His Swedish-born father, a merchant sailor who operated a Swedish restaurant in the city, died when he was young, and his Swiss born mother worked as a domestic servant to support the family. He did a degree in English at Dartmouth College in New Hampshire, then attended Yale School of Drama in the early 1960s but dropped out before graduating to travel around Europe and Central America. According to a May 2017 obituary in The Guardian, he had written two unpublished novels and was working as supermarket shelf-stacker when friend and novelist, Thomas McGuane, paid the costs to send the Alp manuscript to his own editor at Simon & Schuster. The same obituary claimed he was writing a Falling Angel sequel when he died, and a very limited hardback edition was released by Centipede Press early in 2020.

Angel’s Inferno begins where the first book ended. Angel has returned to his apartment after spying the shipping magnate Ethan Krusemark taking part in a black magic ceremony and orgy, after which Angel presses him for the truth about Favorite, then kills him. Angel finds Epiphany’s body, slain by Cypher, and is being taken away by police when he escapes, killing a homicide detective in the process. After a quick detour to Krusemark’s office, where he steals $40,000 and various occult objects from a safe, he vows to track down Cypher and avenge Epiphany’s death. Remembering Cypher’s numerous comments and his dual US-French citizenship and the fact that he lived for much of the time in France, Angel flies to Paris, where, with Krusemark’s cash, he is able to live in luxury while he tracks down his quarry.

The story is denser and more complex than Falling Angel. His ‘lost years as a private dick’ over, Favorite’s memories, proclivities, and skills come flooding back. This allows for some interesting flashbacks of Favorite’s earlier life. It also enables him to embrace his ‘tainted soul’, including killing without compunction. As he muses after dispatching someone who recognizes him as Angel as he is about to board his flight to Paris, ‘Murder seemed so damned easy’. Cypher is even far more confusing and elusive. Equal parts Antichrist and carnival trickster, he operates under a bewildering range of aliases and personas. Angel pursues Cypher through a succession of nightclubs, cabarets and restaurants, utilizing his guile, ruthlessness and investigative skills. Beat novelist and hustler William Burroughs makes an appearance and Favorite strikes up a fevered sexual relationship with Bijou Jolicoeur, a Satanic devotee and owner of the brothel cum cabaret venue called the Baron Samedi Club. As the story progresses, Favorite’s presence in Paris takes on a far larger significance in relation to a mysterious Satanic body known as the ‘Council of Thirty’.

A posthumously published book can be tricky property, given the inevitable question of whether the author was able to finalize the manuscript to the degree they wanted, were they alive. Although Angel’s Inferno does not feel incomplete, it lacks the economy and flow of Falling Angel. It is also far darker, more debauched and violent. When you’ve made a pact to sell your soul to Satan, in terms of what you’re prepared to do, the sky, or in Angel’s case, the depths are the limit. 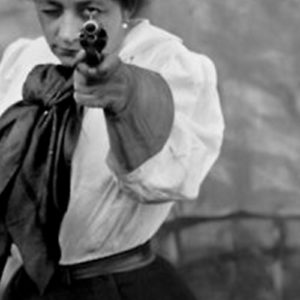 “Vigilante” has long been a negative word in our culture, conjuring up images of KKK riders, Dirty Harry, and the oh-so-privileged...
© LitHub
Back to top