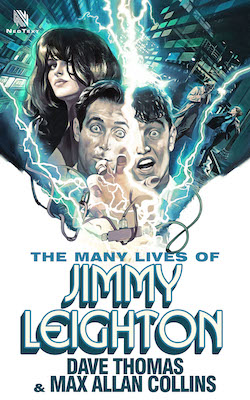 The following is an exclusive excerpt from The Many Lives of Jimmy Leighton, by Dave Thomas and Max Allan Collins. Smalltime thief Jimmy Leighton is desperate for a big-time score. When he breaks into a lab and accidentally activates a quantum machine at the same time he is shot, he finds himself in to places at the same time, a hospital fighting for his life, and also a fancy Chicago penthouse in the life he might have lived.

Cherry Street ran between Main and Harvard, a short, narrow street clogged with police vehicles, fire trucks and an ambulance, painting the night red and blue. Sam parked a good hundred yards up from the call address — a blue-and-white two-story clapboard.

However dissimilar they might otherwise be, the two detectives reflected professionalism in their dress, the department requiring “business casual” but the partners going well past that. Today they were accidentally a matched set in sharp gray suits, diﬀerentiated only by Sam’s crisp tie and Taylor’s silk blouse. The somewhat chilly evening had them both in very traditional trench coats with the lining in.

They badged the uniformed patrolman on the door and went in, and were met by Oﬃcer Peter Flannigan. They all moved aside as paramedics gurneyed a man down the narrow hallway. The EMTs’ blanket-wrapped cargo was a guy about thirty, dried blood caked on his face and a piece of skull hanging like a flap, exposing brain tissue.

“Hard to believe, huh?” a paramedic said. “Found him like this on the basement floor.”

Taylor said, “From the color of the blood, looks like this happened a while ago. With a head wound like that, having a pulse is a miracle.”

Sam oﬀered her a skeptical smirk. “You know that just lookin’ at him do you?”

Taylor scowled at Sam. “Dark brown color indicates oxyhemoglobin that’s formed when hemoglobin in the blood comes into contact with oxygen in air.”

As the cop guarding the front door opened it up for the paramedics, the first EMT said to Sam, “She a doctor or something?”

Taylor answered for herself. “No. Organic chemistry courses as an undergrad.”

The paramedic shot a look at Sam, who said, “And you thought you had it rough.”

And the EMTs and their burden were gone.

Sam turned to Flannigan. “Where’s the homeowner who called it in?”

A dignified little man in his mid-fifties stood as Sam and Taylor displayed ID. Goldman’s suit was rumpled, his tie loose; he was bald up top, gray on the sides, dark eyes alert behind black-framed glasses, black-and-gray beard neatly trimmed.

Their host cleared his throat. “I spoke at a conference in New York today. And when I returned this evening, I found my basement door unlocked and ajar.”

“You keep your basement door locked?”

“Yes — that’s my laboratory. A good deal of valuable equipment’s down there, critical to my work.”

Goldman’s shrug was barely there. “I’m a researcher at the university, and teach a few classes. But I do some research here at home.”

“Anything downstairs,” Sam asked, “worth getting shot over?”

The doctor’s mouth tightened. “I hardly think it likely my intruder would have the slightest notion what I was working on.”

Taylor said, “We’d like a look at your lab—where you found the intruder.”

Patrolman Flannigan, hovering in the background, said, “Hold up, detectives. Forensics hasn’t cleared it yet.”

Sam said, “We’ll try not to have a party down there.”

Flannigan didn’t press it. Sam and his acid attitude were well-known in the department, and Sam liked it that way.

Taylor, with a smile, said, “Dr. Goldman? Come with us, sir, would you please?”

On the way, they passed a little tabletop shrine to a departed loved one. Sam asked, “Your wife has passed, Doctor?”

“Yes. A hit-and-run accident.” “Did they catch the bastard?” Taylor frowned at him. “Sam…”

“Sorry. Did they catch him or her?”

Taylor rolled her eyes. Not what she meant. “No,” Goldman said.

Sam said, “We let you down on that one, Doctor.”

“If I could get her back, I wouldn’t care if they ever catch ‘the bastard.’”

The men were locking eyes when Taylor said, “We’re sorry for your loss, Dr. Goldman.”

As Goldman opened the basement door for them, Sam said, “A Medeco lock? You must really want to keep people out.”

As they descended the stairs, Sam and Taylor exchanged glances, noting the gizmo-walled lab with its weird metal-and-brass chandelier, the two big black cables limp on the floor, a stainless-steel table centerstage, nothing on it.

Why is an empty table, Sam wondered, so prominently placed?

A dark pool of crusted-over blood formed a scarlet Rorschach blot on the floor on the other side of the table.

With the patrolman lingering midway down the steps, the two detectives and the physicist grouped at the bottom.

Sam said to Goldman, “You noticed the door to your basement was unlocked. And then what?”

“I came downstairs and found that poor fellow prone on the floor. Then I called 911.”

Taylor asked, “Did you touch anything? In a moment of panic, perhaps?”

“The banister coming down, possibly,” Goldman replied. “Otherwise… no.”

Sam asked, “Did you check around the room to see if anything was missing?”

“What’s this empty table in the middle of the room?” “Just a work area.”

“What are those?” Sam pointed to the black cables, one connected to what resembled car batteries.

“Part of my experiment.”

“What kind of experiment in physics requires a bunch of car batteries?”

Taylor was eyeballing the odd-ass chandelier. “That what I think it is, Doctor?”

“That depends on what you think it is.”

She shrugged. “I’ve seen pictures, but never saw one up close and personal. It’s a quantum computer, isn’t it?”

Goldman seemed a little taken aback. Maybe he didn’t expect police detectives to inquire into the details of what he was doing in his precious basement lab.

“I am trying,” the doctor said, working to maintain a quiet if slightly strained poise, “to build a quantum splitter—a device that will, among other things, measure an electron’s intrinsic quantum angular momentum, or spin. The electron has two states, either pointing up or down. My hope is to convert that result to a macroscopic arrow pointing ‘Up’ or ‘Down.’ That conversion will ensure that the initial superposition of spin-states of the electrons is fully decohered into a classical outcome.”

In other words, Sam thought, Fuck you, you dimwit cops.

But Taylor was intrigued. “Two states? Like Erwin Schrodinger’s cat in the box? Alive or dead?”

Goldman reacted as if she had slapped him, but then a shocked smile blossomed. “Very good, young lady. Yes, like Schrodinger’s famous thought experiment.”

Sam was not surprised that the girl had popped the science guy’s mumbo-jumbo balloon. Took one know-it-all to bring down another know-it-all.

Goldman was saying, “You have some knowledge of quantum physics, I see.”

“‘…you don’t,’” Goldman said, finishing a quote that must have been famous or something. “Excellent. I think I’m going to enjoy talking to you, young lady.”

“So,” Sam said, “the victim was standing on the near side of that table when he was shot. Blood spatter on the floor opposite tells the tale.”

He pointed to far right, where a washer and drier were along the side wall and the rear wall, past a furnace, revealed a small, barely visible hole.

Sam went on: “Forensics will find a slug in there. Probably upward trajectory.”

Taylor frowned. “How do you make that?”

“Judging by the angle of the head wound, the shooter was either shorter than the vic, or kneeling.”

Sam carefully walked past the furnace to the bullet-pocked wall and Taylor followed; the physicist stayed put near the stairs.

“No shell casing,” Sam said, “so the gun was most likely a revolver.”

“Or,” Taylor said, “the shooter took his shell casing with him.” “Could have collected his brass, I suppose, yeah,” Sam said.

Then returning to Goldman, he said, “But here’s my question, doc—why did the victim break into your house? And why was he shot?”

Goldman shrugged. “I have no idea. All this is just…a scientist, puttering around his home workshop.”

Sam’s chuckle came from somewhere deep. “Yeah. A home workshop that looks like a lab at NASA.”

Goldman’s smile tried to minimize things. “That poor young man, whoever he is, broke in and didn’t find a thing of value upstairs. Came upon a locked door and figured, wrongly, something valuable must be behind it.”

“Tidy little summary,” Sam said, “minus a small detail — that ‘poor young man’ getting shot in the head.”

Goldman said nothing, but the blood had left his face.

The group ascended the stairs, leaving the crime scene to keep its secrets, for now at least.

Upstairs, in the living room, after a few further questions, an obviously frustrated Goldman paced.

Sam whispered to Taylor, “Why don’t you give him the bad news

— one scientist to another.”

Taylor turned to Goldman. “Sir! You’re going to have to check into a hotel at least for tonight.”

Sam said, “This place is about to be sealed oﬀ as a crime scene until forensics completes their investigation.”

The dark eyes behind the glasses got very big. “How long is that going to take?”

Taylor said, “To conduct an investigation in a private home, a warrant’s needed. That’ll take till Monday morning, when the District Attorney’s oﬃce opens.”

“And in the meantime I can’t stay in my own home?”

“And in the meantime you can’t stay in your own home. It’s a crime scene that can’t be processed till the forensics team has their warrant. We err on the side of caution, sir, because the evidence a CSI recovers is of little value if it’s not admissible in court.” 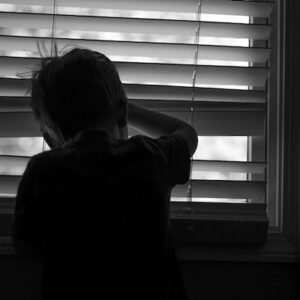 Alex Schulman: In Order To Heal From The Trauma of My Past, I Had To Stop Ignoring It Even as a child, I was already obsessed with my childhood. As I grew older, so did my interest, and whenever I told my mother...
© LitHub
Back to top