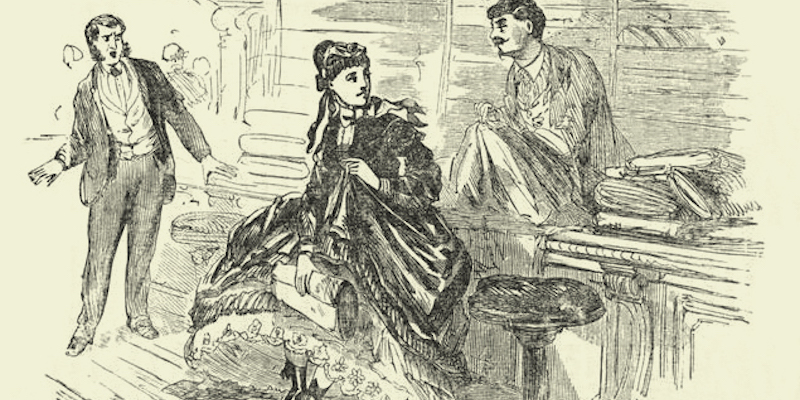 On "Alice Diamond, Queen of Thieves, and her ‘girls’ from The Forty Thieves, who pilfered their way to notoriety in the first half of the twentieth century."

The tall, stylish woman lingered by a rail of fur coats in a top London department store, diamond rings glinting, as her fingers brushed against the most luxurious sable.

World War Two was won, but with rationing still in place, such a beautiful garment cost more than six months’ wages. This lady was clearly wealthy, so the shopgirl had no qualms about turning her back, to help another woman try on a silk nightgown.

It only took a moment for fur to be snatched from its hanger, rolled into a tight bundle, and shoved, unceremoniously, into a special pair of shop-lifters bloomers, which the elegant thief was wearing under her skirt.

The sable coat nestled there as she strolled away, down the stairs and out into Oxford Street, where her gleaming Chrysler was waiting, with the engine running.

Five minutes later, the woman who had been trying on a silk nightgown joined her and the pair broke into gales of laughter. It was yet another successful shopping trip for Alice Diamond, Queen of Thieves, and her ‘girls’ from The Forty Thieves, who pilfered their way to notoriety in the first half of the twentieth century.

But these women weren’t just content with stealing luxury goods such as furs, jewels and silk stockings, in a ruse they called ‘hoisting’. Their trademark was violence for anyone who crossed them, slashing with razors carried in their handbags, or maiming with hatpins.

Official police and newspaper records show their antics made the Peaky Blinders look like a bunch of choirboys, proving that London’s gangland in the turbulent first half of the twentieth century was not just a man’s world. Yet their criminal operation was guarded by a Hoisters’ Code of secrecy which wouldn’t look out of place in a Mafia movie. So, finding people who had direct links to the gang and were willing to talk about it wasn’t easy.

My family’s roots in London go back generations, to the 1800s, and the grandmother who helped raise me in the 1970s worked as a barmaid in the seedy pubs of Soho and theaterland in the 1930s, when the Forty Thieves were in their heyday.

As well as singing musical hall songs from that time to entertain me, she told incredible stories of a daring gang of women who ran amok through West End stores, stuffing fur coats down their knickers and making off with jewels. This was usually in relation to me having a tantrum of some sort and saying, ‘I don’t care!’; at which point she’d chime, ‘Don’t care was made to care, don’t care was hung, don’t care was put in a pot and boiled ‘til he was done!’

Then she’d tell me that people who didn’t follow the rules always ended up getting caught, just like the wicked women who ran through shops, shoving silks down their long, red ‘drawers’, which were elasticated at the knee to hold their loot. They were fearless and brutal, led by a ‘Queen’ who stood as tall as any man and wore a row of sparkling diamond rings as a knuckleduster, but even she went to jail. There was always a twinkle in her eye when she said that, and it made me laugh and forget why I’d been grumpy in the first place.

I thought it was just a tall story, but when I became a writer many years later, I was researching a notorious London gangster, when I realized that my gran hadn’t been making it up after all.

My first encounter with the descendants of The Forty Thieves was at his funeral. At the wake, in a South London pub, many ‘faces’ from London’s underworld drank and chatted together about their past criminal adventures. But I was more interested in a group of very glamorous ladies who positioned themselves in the back room of the pub, away from the fellas. They were dressed in their finest clothes – including fur coats – and were a bit suspicious of me at first when I sauntered up to the bar and introduced myself. In the months that followed, I became firm friends with them, and they began to let me in to their secretive world.

They were the direct descendants of The Forty Thieves, whose mothers, grandmothers and aunts had learned their skills from the most famous Queen of them all, Alice Diamond. The secrets of the gang were passed down the female line, so that generations of families saw thieving as a way of life. Their only regret for their criminal antics was being caught because that usually meant a spell in the grim confines of Holloway Prison.

The gang is believed to have had its roots in Victorian London around the slums of the Seven Dials in Covent Garden, which was infamous in Charles Dickens’ time. By the 1920s, the breeding ground for recruits were the grim terraces and tenements of South London.

Their speciality was “hoisting” – stealing items from shops in the West End- and “clouting” them, by shoving them down their voluminous underwear which had elastic at the knee to hold their stolen goods.

From the 1920s, the all-girl gang was ruled over by Alice Diamond as their Queen. She was born in the workhouse but enjoyed many riches in her lifetime because of her prowess as a thief and a gang leader. She stood nearly six feet tall and was beautiful, with a cool demeanour, at a punch as strong as any man.

Her hoisters dressed like film stars, with beautifully coiffed hair and wearing the latest fashions. They carried razors wrapped in lace handkerchiefs and thought nothing of whipping out their hatpins to blind anyone who crossed them; from the police to gangsters who wanted to muscle in on their lucrative business.

And the most shocking thing was that some of the women I got to know, whose female relatives were taught by Alice Diamond, were still using those criminal talents to steal their designer clothes, even wearing hoister’s drawers to make off with their loot. One immaculately dressed lady confessed: ‘The only thing straight about me, love, is my underwear, the rest is stolen.’

When I took another to lunch, she told me she was going to work in the shops later that afternoon. I thought she had a job, but I felt so naïve when she whipped out a pair of scissors and a device to remove security tags from her handbag, with a wicked glint in her eye. Naturally, I made my excuses and left.

Delving into the National Archives, I trawled through secret police files on the gang, uncovering images of The Forty Thieves, who created a sensation with their crimes. My characters and plot in Queen of Thieves are fictional but as the records show, some of their exploits were so outrageous, you couldn’t make them up.

Theirs is a slice of criminal history which proves that gangland was not just a man’s world and now is the time for their story to be told. 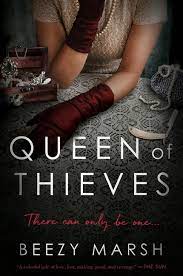 Beezy Marsh is a #1 internationally and Sunday Times top ten bestselling author. She is also an award-winning journalist who has written for The Daily Mail and the Sunday Times. Beezy is married with two young sons and lives in Oxfordshire. Queen of Thieves is her latest novel. 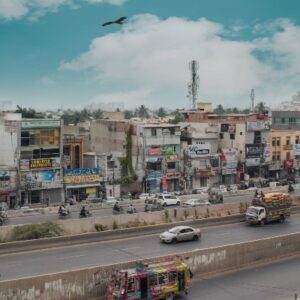 Welcome to Karachi - Pakistan’s most populous city with more than twenty million people living crammed together on the coast...
© LitHub
Back to top