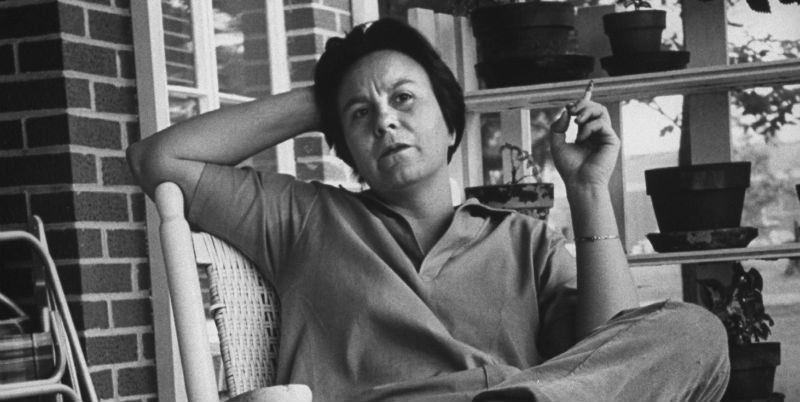 On August 3, 1970, Mary Lou Maxwell was found dead in her car on the side of a country road outside Alexander City, Alabama. Her husband, Reverend Willie Maxwell, was accused of the murder, but never convicted. Over the following seven years, four more family members were murdered while Maxwell collected lucrative life insurance payouts. Police turned a blind eye, and people grew afraid and suspicious, convinced he was practicing voodoo or supernatural powers; it wasn’t until 1977, at the funeral of one of his victims, that a man took the law into his own hands and fired three rounds at Maxwell’s head. A sensational trial ensued, packed to the rafters by journalists. Maxwell’s killer appeared before the jury, with Tom Radley, a promising liberal lawyer—and the same man who defended Maxwell—at his side. Watching it all unfold from the gallery was Harper Lee, who nearly two decades after To Kill a Mockingbird, was trying to write a true crime novel.

Casey Cep’s Furious Hours does something wholly unique: in exploring the bizarre circumstances linking a breadth of crimes—murder and insurance fraud, the failures of the criminal justice system, and the legacy of racism in the South—Cep probes at the mystery of a place built on slave labor, where injustice has seeped into the soil and the courtroom itself is an engine of inequity. In doing so, she tells a story behind a story, taking on the mystery of Harper Lee and the creative spirit, the curse of young success, and the nascent literary potential such a monumental story can inspire. I caught up with Cep about deep research, confronting the limits of evidence in a true crime story, and the suspense of writer’s block. 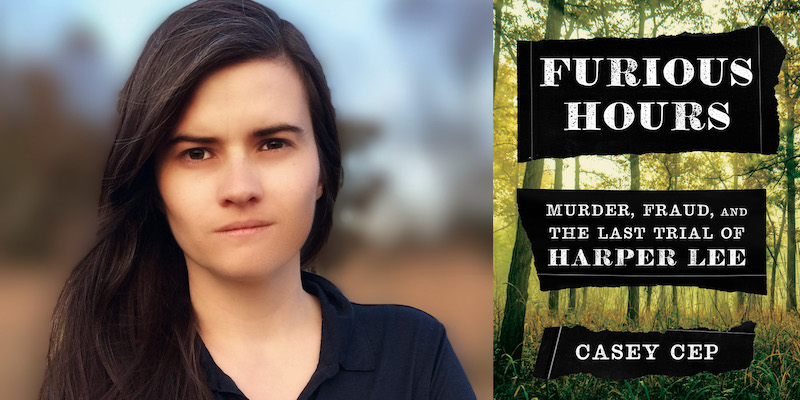 Camille LeBlanc: There’s such a compelling thread linking true crime and literary mythos, racial injustice and vigilante justice, ambition, power, and creative promise. Can you talk about the journey of finding this story and what drew you in?

Casey Cep: I found this story while reporting on Harper Lee’s second novel, Go Set A Watchman, for The New Yorker, but it would have been incredibly interesting even if Lee had never been involved. There was insurance fraud and murder, but I was most drawn to the rich and strange lives of these characters, from a rural minster accused of violence and rumored to be a practitioner of voodoo to a liberal lawyer with grand political ambitions. Through them, I got to write about religion and politics, not to mention labor history and natural history and so much else. But Harper Lee was always going to be a part of this book, and it was such a thrill to follow in her footsteps and try to understand her life as a writer.

A culture has developed in the Deep South, and in this part of Alabama in particular, with certain crimes, as you say, “[running] so deep in the veins of the South that those in power failed to register them as criminal.” How does this story illuminate the moral history of the region?

In that passage, I was writing specifically about sharecropping—the kind of punishing labor conditions documented in this part of America by James Agee and Walker Evans in Let Us Know Praise Famous Men and Theodore Rosengarten in All God’s Dangers: The Life of Nate Shaw. Sharecropping replaced an even more brutal system, though, and in writing about life in the Deep South, it felt critical to take seriously the way that the legacy of slavery continues to shape the culture, especially in a story where vigilantism and violence figure so prominently.

Tom Radney is the lawyer who defended Reverend Maxwell, and then later, defended the man who shot him. Being a Kennedy liberal, an up-and-coming Democrat in George Wallace’s segregationist South, the high-rolling lawyer has “one eye on Montgomery and the other on Washington.” In his summation of his defense of Maxwell’s killer, he laughably appeals to the jury: “I am only a simple country lawyer…” Can you talk a bit about the young lawyer’s motives and the political climate of the era?

Radney was larger than life—he was literally known around town as Big Tom—and I think readers will be equally gripped by his legal and political careers. There’s just so much to debate and discuss in both spheres, and he was certainly a lightning rod in his own lifetime. Obviously he’s in the book because he helped keep the Reverend Maxwell out of jail and then did the same for the vigilante who shot and killed him in front of three hundred witnesses, but Big Tom is just as remarkable for his political idealism. His work for the Reverend in criminal and civil courts raised eyebrows around town, but it was his defense of the Kennedys during the Wallace years that resulted in death threats. Harper Lee said that Big Tom saw himself as a cross between Robert Redford and Atticus Finch, but she found him to be a trickier character. I tried to do justice to his complexity, and I think that readers will be happy to have met him.

The book is remarkably researched and packed with interesting facts, yet the narrative is carefully constructed and the characters come alive—even Reverend Maxwell’s victims, of whom you concede there is very little record. The astute character conclusions are based on real evidence and it never feels like you’re taking overt creative liberties. I’d love to hear more about your research, and how you balanced your commitment to fact with narrative prowess.

I started as I always do, by learning as much as I could about basically every noun that’s in the book: voodoo, murder, the insanity defense, cotton mills, pulpwooding, dams, revivals, insurance fraud, courthouses, and on and on and on. After that, I tracked down every scrap of information I could about the original crimes from trial transcripts, police records, autopsies, crime scene photographs, contemporaneous reporting, archival material, oral histories, and my own interviews with sources. That kind of deep research and reporting doesn’t feel at odds to me with compelling storytelling. Part of why true crime stories are so appealing is that they force us to confront the limits of what can be known, and eliding those limits, whether by fabricating motives or means or inventing someone’s inner life, doesn’t just cross the boundary between fiction and nonfiction; it transgresses something deeper. I love the title of James Baldwin’s true-crime book: The Evidence of Things Not Seen. He borrowed that from Saint Paul, but it’s such an evocative phrase, gesturing in a few words toward these larger, thornier questions of how we make sense of violence, talk about crime, and confront the limits of the criminal justice system.

“Part of why true crime stories are so appealing is that they force us to confront the limits of what can be known, and eliding those limits . . . transgresses something deeper.”

The layers of this story are fascinating; you’ve taken on Harper Lee’s unwritten true crime project, and in doing so, have told a story just as much about artistic ambition and the tension between the creative spark and fact.

It seems to me that there are two fundamental mysteries in my book. The first is how the Reverend Willie Maxwell got away with murder; the second is what happened to Harper Lee after she published To Kill a Mockingbird. It’s true that I faced some of the same challenges that she did in writing this book, from the shortage of facts on certain subjects to a shared aversion to fabrication in nonfiction—but I had one major advantage, which is that, by including Lee in it, I was able to address those issues directly and, I hope, make them interesting in their own right. Which maybe worked: I’ve been pleasantly shocked by the number of readers who seem to find writer’s block just as suspenseful as a murder trial.

The story of Reverend Maxwell has traces of the Southern Gothic, with the pastoral, religious life masking violent and disturbing historical realities. To Kill a Mockingbird also has elements of Southern Gothic, too. What do you think drew Harper Lee to these stories?

I riff a little on this in the book, but Harper Lee always said that she was “intrigued with crime.” She grew up surrounded by stacks of the magazine True Detective Mysteries, cut her teeth on Sherlock Holmes, watched trials from the balcony of the local courthouse as a kid, and studied criminal law at the University of Alabama. You’re right that the Maxwell Case has a lot of elements of southern gothic—murdered wives, dark foggy highways, voodoo powders—but even more than those, I think Harper Lee was drawn to the opportunity to write about the deeper violence that saturates her state’s history: the Creek Wars, the Civil War, and the universal struggle between vigilantism and justice.

And why don’t you think she was able to get this story off the ground? What role do you think the pressures of early fame played in stunting the creative process?

Well, early fame certainly didn’t help. With To Kill a Mockingbird, Harper Lee pulled off an incredible feat—a Pulitzer Prize-winning critical darling that also became one of the bestselling books of all time. It’s almost impossible to overstate how over-the-top its success was, and I do think it was very difficult to work in the shadow of the enormous expectations it generated, especially when the project at hand was a very unlikely follow-up for the author of the great racial and moral parable of her time. But I think a great many other factors were at work, too, from her struggles with drinking and depression and perfectionism to the loss of the tremendous editor and agent who had nurtured her as a writer and helped bring Mockingbird into being.

Can you tell me a bit more about Harper Lee’s role in the reporting and research for In Cold Blood? A keen observer, she was hyper-aware of the shifting winds of authorial intent; can you speak to the differences between the way she and Truman Capote approached the Clutter murders, and more broadly, true crime storytelling?

Capote called Lee his “assistant researchist” for In Cold Blood, which understates the matter. We know from the folks in Kansas and from her own writing about the Clutter murders that Lee broke the ice for Capote with any number of crucial sources, conducted countless interviews both with him and on her own, and brought her keen eye for detail and interest in history to the notes she made for him. Reading her notes in the New York Public Library is a richly rewarding experience for anyone interested in Capote, Lee, or their friendship, and those hundred and fifty or so pages show why she had such strong objections to the book that Capote ultimately wrote. The liberties he took with the narrative and the sympathy he extended the murderers were both equally shocking to her. I think a great deal of what she was trying to do with her own true-crime book was prove that just-the-facts journalism could make for a page-turner every bit as good as In Cold Blood. 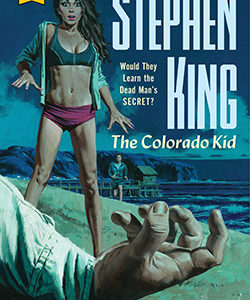 “Twenty-ﬁve years ago,” he said, “back in ’80, there were two kids who took the six-thirty ferry to school instead...
© LitHub
Back to top