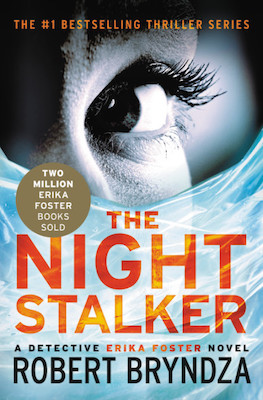 The following is an exclusive excerpt from The Night Stalker, by Robert Bryndza, and his second to feature detective Erika Foster. In the following passage, police visit the wife of a recently murdered man and find her brother’s behavior rather suspicious.

They sat in a tiny sweltering kitchen cluttered with ornaments and frilly tea towels. The window overlooked a back garden even more infested with gnomes than the front. Erika found their manic rosy faces creepy and wondered if they were super-sized so Penny’s mother could see who was who.

“Last time I spoke to him—Gregory—was three days ago,” said Penny. She remained standing, leaning against the sink with a look of disbelief on her face. She lit up a cigarette, grabbing an overflowing ashtray from the windowsill.

“What did you talk about?” asked Erika.

“Not much. He was going off to France, for some conference.”

“He’s one of their senior members.”

“And was it odd you hadn’t heard from him, that he’d arrived safely?” asked Erika.

“We were getting a divorce. We only phoned each other when we had to . . . I rang him to check he was still going, and that I could keep Peter. We’ve got . . . We had an agreement that he would stay with his dad on Saturday nights.”

“Is there anyone you can think of who would do this to your husband?”

“Is there anyone you can think of who would do this to your husband?”

Penny stared out at the garden and flicked her cigarette ash into the sink.

“No . . . There were people he’d fallen out with, but everyone has that. I can’t think of anyone who hated him enough to break in and . . . suffocate him.” She began to cry. Moss took a box of tissues off the kitchen table and offered her one.

“The house had a security system. When was it put in?” asked Erika.

“A couple of years ago, after the extension was completed.”

“Did you always use it?”

“Yes. Gregory always set it when we went away. He used to put it on at night too, but when Peter started walking there were a few times when he came down in the dark for a drink and set it off, so we stopped . . . But we added extra locks on the windows and doors.”

“Can you remember the name of the security company?”

“That’s what we are trying to find out,” said Erika. “May I ask why you and Gregory separated?”

Article continues after advertisement
“He’d grown to hate everything about me: the way I dressed, the way I talked, the way I was with people.”

“He’d grown to hate everything about me: the way I dressed, the way I talked, the way I was with people. He said I was too flirty with men in shops, he thought my friends weren’t good enough. He tried to cut me off from my mother, but his mother was always welcome, always there. And he didn’t get on with my brother, Gary . . .”

“Was he ever violent?”

“I was talking about Gregory,” corrected Erika.

A look passed between Peterson and Moss, and Penny noticed it too. “Sorry, I’m confused. No. Gregory wasn’t violent. He could be intimidating, yes, but he never hit me . . . I’m not stupid. The relationship wasn’t always bad. When he met me, he thought I was a breath of fresh air: exciting, a bit mouthy and funny.”

Erika looked at Penny and saw how men found her attractive; she was pretty and down to earth.

Penny went on: “But men just want flings with those kind of girls. When we got married, he expected me to change. I was his wife, his representative, that’s what he said. I was representing him in society! But I wasn’t going to be that kind of wife. I think he only realized that afterward…”

“What about Gregory’s mother?”

“How long have you got? Their relationship makes Oedipus Rex look like a sitcom. She’s hated me since the word go. She found him, didn’t she?”

Penny’s face clouded over. “She didn’t phone me. I had to find out from some copper knocking on the door. That says a lot about her, doesn’t it?”

“It wasn’t her responsibility to inform you. She was taken to hospital with shock,” said Moss.

“She mentioned that there was an incident between Gregory and your brother, Gary?” asked Peterson.

At the mention of Gary, Penny stiffened. “It was just a row, family stuff,” she said, hastily.

“She said it was a physical fight.”

“But they were grown men. Your brother has been in trouble with the police before,” added Peterson.

Penny’s eyes darted between the three officers. She stubbed out her cigarette in an ashtray with a heap of old dog ends. “My brother’s on probation for attacking a bloke in New Cross,” she said, exhaling cigarette smoke up to the ceiling. “He’s a bouncer in a club. The bloke was off his head on drugs, so it was self-defense. But Gary—he went too far. You leave him out of this. I know my brother isn’t a saint, but there is no way he had anything to do with this, you hear me?”

“Is that what made you jump earlier, at the front door? Did you think it was Gary?” asked Erika.

“Look, why the hell are you here?” Penny folded her arms across her chest and narrowed her eyes. “I’ve already had coppers at the door telling me and asking questions. Shouldn’t you be out there trying to catch this bloke?”

“I’ve already had coppers at the door telling me and asking questions. Shouldn’t you be out there trying to catch this bloke?”

“We never said it was a bloke,” said Moss.

“Don’t get smart. You know most killers are men,” said Penny. Erika shot Moss a look: she could see that Penny was closing down on them. “Okay, okay, Mrs. Munro. I’m sorry. We’re not investigating your brother. We have to ask these questions, to build up a picture and help us catch who did this.” Penny lit another cigarette. “You want one?” she asked. Moss and Peterson shook their heads, but Erika took one from the packet. Penny lit it for her.

“Gregory wanted to send Peter to boarding school,” Penny said. “To send him away, a little boy! I put my foot down and said no. The weekend before Peter was due to start at the local primary school, I found out Gregory had canceled Peter’s registration, and had gone ahead and accepted the place at the boarding school!”

“Easter. I phoned Gregory, but he told me Peter would be going that Monday, and I wasn’t to stand in the way of him getting a decent education. It was as good as abduction! So Gary went round to get Peter. He kicked the door in, but he didn’t . . . He wasn’t violent, okay? Estelle was there. She went after Gary with a glass ashtray, and then it all kicked off. Bet she left that part out, didn’t she?”

“So you’d say your relationship with Estelle isn’t good?” Penny laughed bitterly. “She’s a bitch. She creates fantasies to excuse her son’s behavior. When we got together, she hated me on sight . . . She ruined everything: our engagement party, the wedding. Gregory’s father died when he was small; Gregory was an only child and it made them depend on each other, him and his mum. What do you call it? Co‑dependent. I thought at the beginning of our marriage that I might win him over, or at least become the person who was the closest to him, but she made sure I was always second in line. Sounds bloody pathetic, don’t it? I hear myself telling you all about it and I sound pathetic.”

From THE NIGHT STALKER. Used with the permission of the publisher, Grand Central Publishing. Copyright © 2018 by Robert Bryndza. 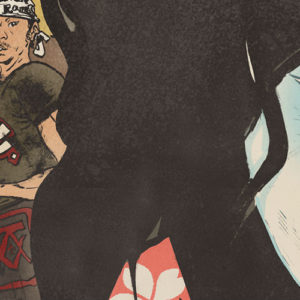 Publishing Anthony Bourdain's Last Book Anthony Bourdain wrote a lot. In addition to scripting over 15 seasons of game-changing television, the prolific and peripatetic...
© LitHub
Back to top