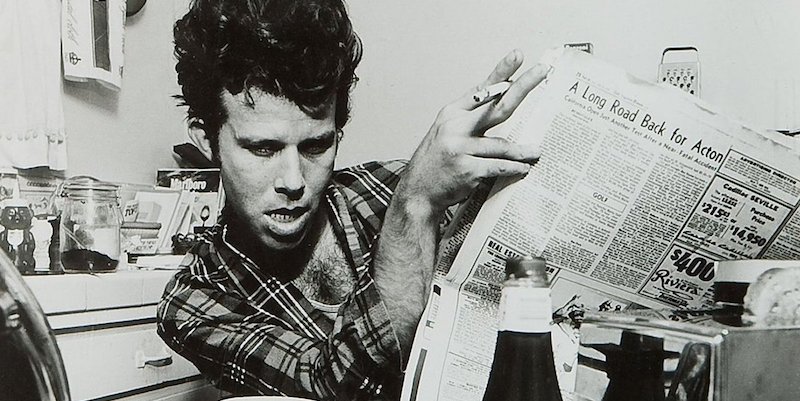 Tom Waits pulls from music and non-music traditions like an interior decorator choosing the right color scheme for a new home. He borrows a little from Lord Buckley and Louis Armstrong, from Jack Kerouac and Charles Bukowski, from movies and advertisements. He mashes it together, manufacturing warped yet recognizable personas: the Dylan-esque folkie, the gin-soaked jazzbo, the atonal Weimar-era lounger, the deranged bible stomper. Waits metamorphoses from record to record, song to song. One ingredient in the brew that persists over his five-decade-and-counting career is noir, permeating the early-to-middle albums and slightly seasoning the later ones.

Noir is a slippery term, and scholar James Naremore describes it best when discussing films, saying its “chiefly defined by a chain of associations—a list of movie titles in which A has something in common with B, and B has something in common with C, but C doesn’t necessarily have anything in common with A.” Noir relies on referents and general characterizations, which Waits applies to various facets of his art: his phrasing; his use of jazz musicians (although classic film noirs rarely had jazz scores—a common misconception); his lyrics and album art conveying urban alienation. What follows are ten of his most noir-ish tracks—those that evoke it either in style or content.

The album’s name clues you in on its mood: a nod to Edward Hopper’s iconic painting of nocturnal loneliness. Waits the beat poet replaces Waits the folk singer in this spoken-word live-in-studio recording, which is a deliberate noir track. In a muffled falsetto voice, he tells the tale of a road-weary traveler stranded on a desolate road, echoing the opening of Robert Aldrich’s Kiss Me Deadly (1955). “This is a soundtrack for a film, the soundtrack was written quite a bit later than the film,” Waits said in an interview, “The film came out about 1947 and I wrote it just a couple of weeks ago and it’s about a foggy night on one of those ‘triangle’ films that you see on The Late Show,” he jokingly added, though this doomed romance is barely legible in the track.

Based on a true story—while in New York for a short spell, Waits witnessed a crime scene in Chelsea: the lifeless body of a black teen just shot to death in a pizza parlor. The incident left such an impression on the singer that it became the basis for his fourth album’s title track. “Small Change” opens with a match struck, an exhaled breath, Lew Tabackin’s tenor sax blowing a sad solo, then the story—a piece of pulp reportage with Waits in Satchmo mode, complete with vibrato and slurred words.

Sporting a shadowy cover photo by Hollywood portraitist George Hurrell, the undervalued Foreign Affairs is Waits’ most noir-tinged album, whose centerpiece is “Potter’s Field,” an eight-minute spoken-word epic inspired by Samuel Fuller’s Pickup on South Street (1953), starring a cast of low lives with colorful names like Nightstick, Nickel, and Captain Charon. Big, brassy cinematic orchestration backs this yarn spun by “a full of whisky / Blind man” ratting out the whereabouts of a vanished pickpocket for a drink bought by the listener.

“Burma-Shave” repackages the small-town couple-on-the-run mythos inaugurated by Bonnie and Clyde, then committed to literature with Edward Anderson’s Thieves Like Us, then finally adapted to the silver screen with Nicholas Ray’s They Live by Night (1948)—an avowed influence (“He kind of looked like Farley Granger with his hair / Slicked back”). In the bittersweet track, a fugitive holes up in Marysville, which is Nowheresville, meets a bored young woman, and they hightail it to Burma-Shave—the destination for a better life. While on their way, they crash their car, wrecking their dreams. As shocking as the collision, Jack Sheldon blares a sharp solo on trumpet, intruding in on Waits’ sweet piano and voice. That’s the sound of harsh reality smashing into youthful hope.

A noir song, not a spoken-word performance this time; a pronounced electric sound, a tight rhythm, and vocals that modulate between a Captain Beefheart hush and spurts of shouting—“Red Shoes” is as adventurous as Waits gets at this point in his career. The lady in crimson footwear waits for her man, who, little did she know, is in the middle of copping a diamond ring. Although nothing indicates that she’s a femme fatale, the man is like a lot of noir protagonists: desperate, rash, and willing to risk it all for his love. See: Scarlet Street (1945), The Postman Always Rings Twice (1946), Tension (1949), et al.

A bluesy number in which Waits’ wet voice growls one of his best lyrics: “Don’t you know there ain’t no devil that’s just God when / He’s drunk”—a morose sentiment shared by noir. “Doctor lawyer beggar man thief,” all sorts of riffraff cross paths on LA’s famed intersection, including junkies and starry-eyed women blowing in from Middle America. The corner, a cesspool and a destination, will change you for the worse.

Waits gets weirder—and better—with this acclaimed album backed by a rhythm section (those front-and-center marimbas!) that’s nonpareil. Taking the form of an urban legend, and a companion to “Shore Leave”—a spoken-word tale soaked in exoticism, starring a sailor on dry, foreign land—“Swordfishtrombone” follows a soldier “home from the war / With a party in his head.” The PTSD, paranoia, isolation, and existential dread of post-war vets are the raw material of classic (Act of Violence and Crossfire) and neo-noirs (Taxi Driver), putting Waits’ song in good company.

Another piece about an intersection—one not so well known, right smack dab in Minneapolis. All the losers slink along here in this concise, syncopated spoken-word track of woozy clarinet, faint piano, and moaning bowed saw. This is a spot where “All the donuts have / Names like prostitutes,” “And Dutch is dead on his feet,” “And everyone is behaving like dogs.” Quite the place, as Waits describes it, with his flat, flinty voice, sounding like he’s narrating a noir in voiceover.

Waits in the ‘90s took on blues, gospel, country, and Euro avant-garde airs, long abandoning the lounge lizard and hep jazz façade of his Asylum years. Though noir trappings aren’t prominent in his late albums, they trickle in here and there, such as “Shake It,” a demented song full of violence and aggression, channeling the toxic headspace of an ex-convict holed up in a motel room. As Barney Hoskyns writes in his unauthorized bio, Lowside of the Road, the clipped lyrics read “like some cross between Cormac McCarthy and James Ellroy,” and showcases a character that wouldn’t be out of place in a Jim Thompson novel.

The faint pulse of noir beats on in Waits’ most recent album, in “Kiss Me,” a simplistic song—a romance that was once exciting but now on the wane—steeped in vinyl static. The music, characterized by a stripped-down sound, is ruminative and reflective and nostalgic. Think of all the poor saps enamored by a beautiful woman, who turns out to be a double-crossing femme fatale by the end of the picture. Think of this archetypal noir narrative template while listening to old-man Waits singing a throwback to his jazz-crooning days.

Laetitia Rodd and the Case of the Wandering Scholar 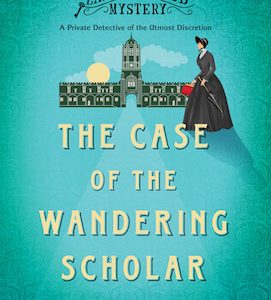 Laetitia Rodd and the Case of the Wandering Scholar

I wrote to Rachel Somers as soon as I got home, boldly announcing my arrival the following week. This was a matter that had to be dealt...
© LitHub
Back to top