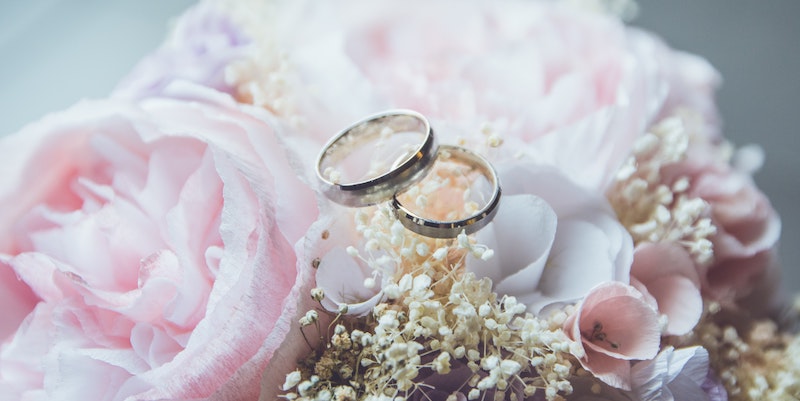 When a wedding guest is dead, these sleuths find the killer.

In high school, one of my ‘life skills’ courses had a section on planning my wedding. Okay, to be fair to the school district and my home economics teacher’s course planning, it was a few years ago. But developing that plan was my first attempt at event planning—a skill that has been very useful in my life, and more than just for planning my two weddings…especially since I have a history of having less than perfect weddings in my real life.

Wedding disasters started early for me. My oldest sister’s wedding was planned down to the minutia. The church, the dress, the guest list. The only problem was my widowed mother didn’t have a ride from the church to the reception hall. In a time before cell phones, it took a while before anyone realized that Mom had been left behind. When my second oldest sister got married, I was older and was asked to be part of the wedding party. As a candle lighter. A job I didn’t even know existed but was part of the rituals. Not only did I have to keep the flame lit and walk up the aisle, but no one also told me that the lighter needed to be turned to get the flame close enough to the candle. The other candlelighter was done and waiting to walk back with me long before I figured out how to light the second candle.

Then of course, my own weddings were not anything like the one I had planned years before in class. The first one was held in a small church on the Boise State University campus. But the work study holder of the keys changed over for the semester, and no one told the new holder about our wedding. We stood on the grass outside the church while someone ran to a pay phone to call the emergency line. (Cell phones solve so many potential issues now.)

When I started writing A Fatal Family Feast: A Farm to Fork Mystery, there were a lot of plots, suspects, and victims to choose from. Over the years, Angie Turner, and Felicia Williams, her best friend, have taken their idea of the Idaho-set, perfect farm-to fork restaurant and made it a reality. Now, Felicia’s ready to take the next step with her life and marry Angie’s sous chef, Estebe. Unfortunately, Felicia’s estranged wealthy family has other plans for their only daughter and her life.

Estebe is the perfect potential son in law, except in his in-law’s eyes because of his heritage, his choice of vocation, and the fact he lives across the country from where the large, Williams family-owned business is located. A business they want Felicia to take over. Dealing with her disappointed family is putting a damper on Felicia’s wedding plans, but it’s nothing when her groom is accused of killing her ex-fiancé. Angie, with the help of several of the River Vista regulars, is up to the task of finding the real killer and clearing Estebe’s name…as long as Angie doesn’t wind up on the killer’s RSVP list.

Many wedding-themed cozy mysteries have an amateur sleuth who is working in the wedding industry, dealing with a friend’s wedding, or putting together their own ceremony. Below, I’ve listed out several wedding-related cozy mysteries that readers will enjoy. 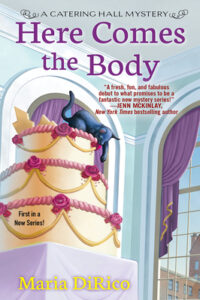 In this fun, first in series, the main character, Mia Carina, is recently widowed, relocated, and working at her father’s catering hall. Her first assignment? A bachelor party for a groom she wouldn’t let her worst enemy date, let alone marry. When the cake is wheeled into the party, the amateur sleuthing fun begins. Since Mia’s dad has some shady associates, well, he’s on the top of the suspect list. 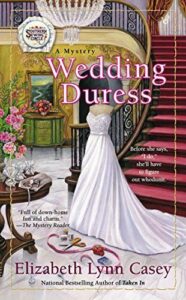 Wedding Duress falls into the category where the wedding is just as important to the main character as the murder. Especially since Tori Sinclair, the sleuthing librarian, is the one getting married. A friend’s ex-nanny is murdered but ruled an accident and Tori can’t help thinking she can fit solving the mystery to her already-filled bridal to-do list. Mints, dress fitting, and solving a murder: it’s all on the wedding planning list. But can she nab a murderer and make it to the church on time? 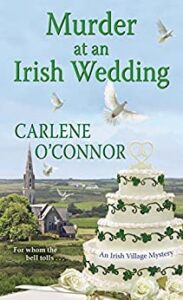 Murder at an Irish Wedding: An Irish Village Mystery by Carlene O’Connor

If you’ve ever considered a destination wedding, Murder at an Irish Wedding gives you an inside glimpse. Siobhán O’Sullivan has her hands full with catering a celebrity wedding at the neighboring castle between a local lad and a famous fashion model. When the best man is found murdered in the woods and Siobhán’s beau, Macdara Flannery, is the prime suspect. Murder at an Irish Wedding is a cozy where the sleuth must fit the investigating around the preparations of the wedding. It might not be Siobhán’s wedding, but it’s her livelihood in jeopardy, and, if the murderer finds out she’s snooping, she could be the next victim on his own grisly check list. 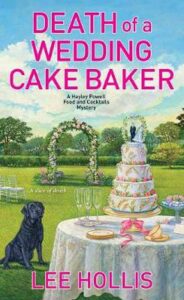 In this fun Bar Harbor, Maine-set cozy, Hayley Powell is the matron of honor for her best friend’s wedding. But then the bride’s less-than-friendly cousin and wedding cake baker is found dead in a poisoned three-layer cake. With problems between the bride and groom and a rash of snide gossip about the couple, Hayley must sort through a town filled with suspects in order to find the killer before he crashed the ceremony. 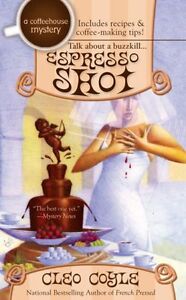 This coffee-focused cozy starts with the catering job everyone reading the novel would turn down in a heartbeat…except coffeehouse manager, and our amateur sleuth, Clare Cosi. Readers will question her sanity about taking the job, but not the heart behind her reasoning. Creating a gourmet coffee and dessert bar for her ex-husband’s wedding has been complicated when people close to bridezilla, Breanne Summour, suffer fatal accidents. Now, Clare needs to find the real killer before she’s the one who gets burned. 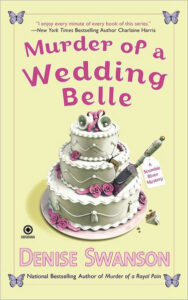 Murder of a Wedding Belle: A Scumble River Mystery by Denise Swanson

Family responsibilities brings our school psychologist-turned-amateur sleuth, Skye Denison, to agree be her California cousin’s maid of honor. The fact the wedding is as over the top as her cousin has always been rubs Skye the wrong way, especially when she’s also expected to assist the control-freak wedding planner. Now the wedding planner is dead, and Skye is no longer just the assistant. Getting her cousin to the church on time might be the simplest action on the to-do list, especially when Skye is busy sorting through the long list of people who hated the planner to find the one who decided to kill her. 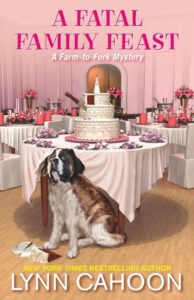 Lynn Cahoon, author of A FATAL FAMILY FEAST, a farm-to-fork mystery, is a NYT and USA Today author of the best-selling Tourist Trap, Kitchen Witch, Cat Latimer, Farm-to-Fork, and soon to release, Survivors’ Book Club mystery series. She’s also happy to announce her second wedding has so far, held up, in spite of the lack of planning that April afternoon in Vegas. No matter where the mystery is set, readers can expect a fun ride. Find out more at her website www.lynncahoon.com
http://www.lynncahoon.com 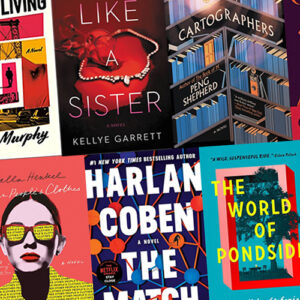 If you're starting your year wishing for a sense that time is passing, than look no further! For the best way to know that...
© LitHub
Back to top