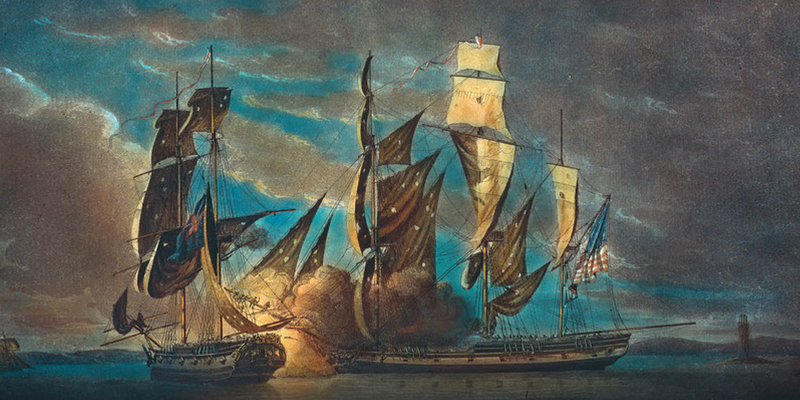 Congress was reluctant, at first, to embrace privateers. As the war effort grew more desperate, they soon changed their minds.

By early 1776, the upstart Americans had made considerable progress in taking the fight to sea. Between state navies, Washington’s navy, privateers from some individual colonies, and the nascent Continental navy, the colonies were demonstrating their maritime creativity and potency. But one major feature of their maritime strategy was conspicuous in its absence: privateers commissioned by Congress.

Delegates had received many entreaties urging them to pursue this course. In late November 1775, for example, Simeon Deane, a Connecticut merchant, wrote to Silas, his brother and a congressional delegate, “I am desired by a number of gentlemen here, to ask, through your influence, whether the Congress will grant commission to private adventurers to fit out a privateer or privateers to take British property on this coast, or in the West Indies.” Just over a week later, William Cooper, a member of the Sons of Liberty[*] and the town clerk for Boston, wrote to John Adams to complain about Congress’s inaction. “Is a sea coast of above 2,000 Miles extent from whence two hundred sail of privateers might this winter . . . ​be launched out upon the British trade, still [to] be held in a state of neutrality under a notion that we are opposing [the North] Ministry & not the people of Britain, while our enemies are employing the whole force of the Nation to plunder and ruin us?” By failing to use all of the maritime tools available to it, Congress was, in Cooper’s eyes, hobbling the American cause. “I some time ago ventured a prophesy,” Cooper told Adams, “that it would not be long before we realized our importance as a maritime power, and the success attending our first naval enterprises, are very encouraging presages of what is yet to come, but if weak nerves and large estates should operate to the preventing the whole force of the colonies being exerted against the common enemy, the issue of so unequal and unheard of a war, may be easily augured.”

Fortunately for Cooper and many others who held similar views, Congress did not remain silent on the subject of privateering for very long.

News of the latest salvo from Parliament reached America in February 1776, sending shock waves throughout the colonies. This was the Prohibitory Act, passed in late December. John Adams called it “a complete dismemberment of the British Empire. It throws thirteen colonies out of the royal protection, levels all distinctions, and makes us independent in spite of our supplications and entreaties. It may be fortunate that the Act of Independency [as it was called by many] should come from the British Parliament, rather than the American Congress; but it is very odd that Americans should hesitate at accepting such a gift from them.”

The Prohibitory Act completely cut off trade between the American colonies and Britain and its other colonies, left all colonial vessels vulnerable to seizure by British ships, and made it lawful for British naval officers to impress American sailors onto their ships. In effect a blockade of American shipping, the act was nothing less than a declaration of economic warfare intended to hobble the colonies amid the expanding conflict.

As Adams feared, Congress hesitated in reaction to the act. But while independence would have to wait, privateering wouldn’t. When the merchants and other leading citizens of Philadelphia sent a petition to Congress in late February, asking for permission to “fit out privateers, and make reprisals on all British vessels,” Congress was now receptive to the idea[†]. Reflecting on the petition’s merits, New Hampshire delegate Josiah Bartlett opined, “It seems very hard that Britain is seizing all American vessels and the Americans are not permitted to return the compliment.” He also noted that the Prohibitory Act “had altered the minds of” those in Congress who had come to view privateering in a very favorable light. Oliver Wolcott, a delegate from Connecticut, was more succinct. Since the act had effectively cast the colonies out of the paternal embrace of empire, Wolcott said, “it behooves us therefore to take care of ourselves.”

The privateering debate soon commenced. Although a few delegates were wary of its authorization, the vast majority were strongly in favor of it.

The privateering debate soon commenced. Although a few delegates were wary of its authorization, the vast majority were strongly in favor of it. The only real sticking point concerned the language in the preamble of the resulting resolution, as the issue of privateering had raised a much larger problem. On March 22, an amendment was offered “wherein the King was made the author of our miseries instead of the ministry.” While Adams and many other of the more radical delegates had long believed that the king, along with the ministry, was culpable, blaming the monarchy for the colonies’ woes remained an explosive move. More than a few of the moderate delegates still clung fiercely to the idea that the colonies were fighting Parliament and not the king.

For four hours the delegates argued over the amendment. Opponents claimed that the language “was effectually severing the King from us forever,” which was, as they saw it, tantamount to a declaration of independence. Congress, however, was not ready to take such a bold stance, so the amendment to the preamble was vetoed. The very next day, March 23, 1776, Congress passed the privateering resolution into law.

The preamble in the final resolution blamed the British fleets and armies for prosecuting “an unjust war . . . ​in a cruel manner,” and it singled out the Prohibitory Act as being particularly injurious. Congress concluded that it was “manifest that the iniquitous scheme, concerted to deprive” the colonies “of the liberty they have a right to by the laws of nature and the English Constitution, will be pertinaciously pursued.” Congress had no alternative but to “provide for their defense and security” by authorizing the colonies to fit out privateers to cruise against the enemy.

The Prohibitory Act had declared all colonial vessels fair game; Congress now returned the favor. Privateers were free to capture any British vessel, not just those that were delivering supplies to British forces in America. (Later, neutral ships carrying goods bound for British use were also deemed acceptable targets). About the same time, Congress also unleashed Continental navy ships, allowing them to attack all British vessels as well as neutral ships carrying British supplies.

Privateers were required to bring their captures before courts of vice admiralty established in various ports, where the vessels and their cargo would be libeled, or have a suit brought against them, to determine whether they were lawful prizes. If the capture was not a lawful prize, it would be returned to its owners. If it was a lawful prize, the privateer owners and the privateersmen split all of the prize money, minus the cost of the trial.

Adams rejoiced over the privateering resolution. On the day it passed, he wrote to Brigadier General Horatio Gates, who served as the adjutant general of the Continental army, with the good news. “We have hitherto conducted half a war. . . . ​But you will see by tomorrow’s paper that, for the future, we are likely to wage three-​quarters of a war. The Continental ships-​of-​war, and the Provincial ships-​of-​war [the state navies], and letters of marque and privateers, are permitted to cruise on British property, wherever found on the ocean.” However, before the law could go into effect, Congress needed to spell out the regulations governing privateers. It did so on April 3.

Although the privateering system was authorized by Congress, it would be implemented by the colonies. The colonies that had passed their own privateering laws—​Massachusetts, Rhode Island, and New Hampshire—​updated them to reflect the congressional terms. Even though the colonial laws remained on the books, virtually all privateering commissions in America were Continental from this point forward. Congress would supply the colonies with privateering commissions that were to be filled out by those applying for letters of marque. The commissions had blank spaces for the name and tonnage of the vessel as well as the number of cannons and officers and crew on board, among other items. The applicants would also usually indicate whether the vessel would act solely as a privateer or as a letter of marque engaging both in trade and capturing prizes. The owner or commander was required to post a bond of $5,000 for vessels under 100 tons and $10,000 for larger vessels, payable to the president of the Congress. That bond was intended to ensure that the commander and his crew would not violate the terms of the commission, which detailed what actions privateers could take and what actions were prohibited. In May 1780, the bond amount was raised to $20,000 for all privateers.

If privateersmen killed, maimed, tortured, or in any other manner treated the officers or crew of captured ships cruelly or inhumanely—​or in a way that was contrary to the “practices of civilized nations in war”—​the offenders would be severely punished. Also, one-​third of the crew had to be landsmen, or non-​mariners. The goal was to limit the number of sailors who decided to become privateers, given that it potentially paid better than serving on Continental navy ships. That way, the thinking went, the chances of navy ships filling out their crews with seasoned mariners improved.

In his letter to the colonies announcing the law and the regulations, John Hancock, president of the Continental Congress, said: “It is necessary in conducting the warlike operations on the part of America, to meet our enemy on every ground, and to defend ourselves in the best manner we can against all attempts, in whatever shape, to deprive us of either liberty or property.” Privateers were now to be a major part of the colonial war effort.

[*]  A grassroots group that employed civil disobedience and, at times, violence to assert/defend/advance American rights and attack/defy/resist British policies/rule, especially the imposition of tax policies, most notably the Stamp Act.

[†] Unfortunately, the actual petition itself has been lost, and what we know about it comes from those who made reference to it in their letters. 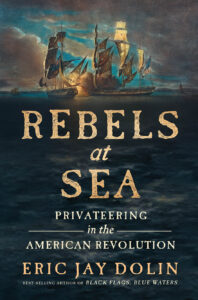 Eric Jay Dolin is the best-selling author of Leviathan and Brilliant Beacons. He and his family live in Marblehead, Massachusetts, from which the pirate John Quelch departed in 1703, and returned to in 1704, only to be hanged in Boston. His latest work is Black Flags, Blue Waters is now out from W. W. Norton.

The Top Ten TV Dramas for People Who Like True Crime 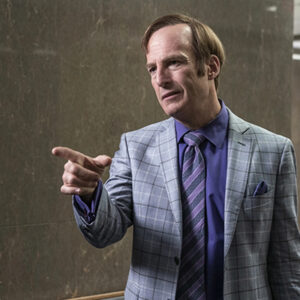 The Top Ten TV Dramas for People Who Like True Crime

A few weeks ago, I directed the television clicker to a Dateline NBC program. Of course, it was about crime! My spouse wasn’t...
© LitHub
Back to top