The Rise of the Techno-Thriller

12 Thrillers that Explore The Social and Ethical Issues of Innovation

My first novel, Pendulum, was born out of conversations with people whose lives had been radically changed by technology. There was the mother who was informed by police that her fifteen-year-old daughter had become a victim of revenge porn, the parents whose teenage son had stolen $2,000 to fly to Chicago to see a stranger he’d met in an Internet chat room, and the office worker who’d picked up an online stalker who became a real world threat. Technology is changing the way we’re connecting to the world, exposing us to dangers that never previously existed. Pendulum looks at what happens when one of those connections goes badly wrong.

The sequel, Freefall, follows Pendulum’s three protagonists, photojournalist John Wallace, FBI agent Christine Ash, and Metropolitan Police detective Patrick Bailey, as they deal with the aftermath of their experiences and take on a secretive group set on using technology to reshape the world. As a former technology consultant and entrepreneur, I’m fascinated by the way digital systems can be gamed or hacked, and, as a consequence, how easy it is to manipulate the real world.

Pendulum and Freefall continue a tradition of using technology as a lens through which to examine social or ethical issues. Here are some of my favorite examples: 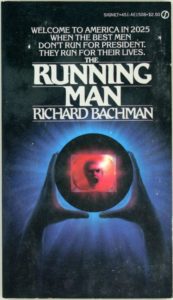 Inequality and exploitation: The Running Man by Richard Bachman

Unlike the film adaptation of the same name, which features a titular game show in which professional killers hunt down convicts, in Stephen King’s novel, Ben Richards is forced to participate in The Running Man because he’s poor and needs money to treat his daughter’s pneumonia. The Running Man is a searing examination of media manipulation, inequality, and exploitation. 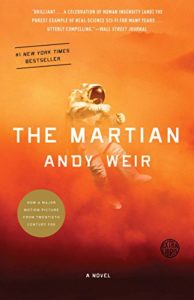 The power of science: The Martian by Andy Weir

Mark Watney’s tale of survival on the surface of Mars is a love letter to science. It is a powerful story that illustrates the importance of education and the role of intelligence in solving the problems humanity faces. At a time when ignorance seems to be on the rise and opinion is deemed by some to have the same weight as fact, The Martian serves as an important study of the power of logic, knowledge, and scientific truth. 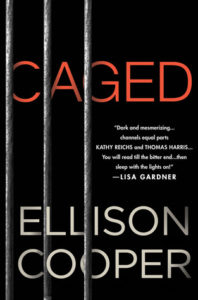 The secrets that lie in the human mind: Caged by Ellison Cooper

I’m fascinated by the workings of the mind, and was naturally drawn to Caged, which tells the story of FBI neuroscientist Sayer Altair, and her hunt for a dangerous killer. Ellison Cooper is a compelling author, and she effortlessly weaves neuroscience into her tale, which isn’t surprising given her PhD in anthropology and her specialism in cultural neuroscience. The giant leaps currently being made in neuroscience are pushing the boundaries of our understanding of ourselves, and Caged is a thrilling route into this very real technology. 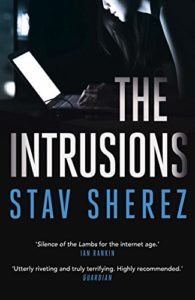 Stalking and social media manipulation: The Intrusions by Stav Sherez

The Intrusions is the third book in Stav Sherez’s Carrigan and Miller detective series, but it can be read as a stand-alone story. Beautifully written, The Intrusions won the 2018 Theakston’s Old Peculier Crime Novel of the Year Award, and it is a complex look at the costs and consequences of social media and how vulnerable it can make people. 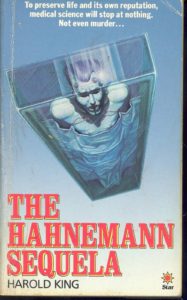 Wealth, health, and longevity: The Hahnemann Sequela by Harold King

Growing up, I loved this fast-paced action thriller that tells the story of David Townsend, a truck driver who is kidnapped by a medical research company with a sinister objective. It was only when I re-read the book with adult eyes that the book’s important themes really resonated. The Hahnemann Sequela shines a light on the gulf between life expectancies of the rich and poor, a gulf that is sure to become even more controversial as life-extending technologies become reality.

Patriarchy and inequality: The Handmaid’s Tale by Margaret Atwood

Set in a new future United States, where a legitimate government has been overthrown by a terror attack, The Handmaid’s Tale takes a compelling look at so many big themes, including the role of religion and, of course, the subjugation of women and destruction of their rights in order to maintain a warped social structure. 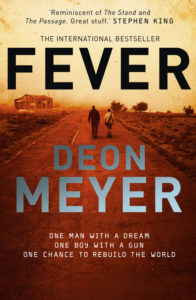 The strength of civil society: Fever by Deon Meyer

One of my favorite books of recent years, Fever is set in a world that has been ravaged by a deadly virus. Nico Storm and his father face this post-apocalyptic world, but rather than crumble in the face of the odds, they try to create a community that works together to bring humanity back from the brink of a wild and savage existence. A wonderfully complex, touching, and thrilling novel. 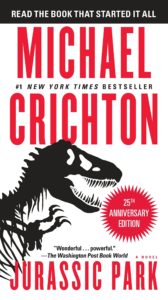 The dangers of technology: Jurassic Park by Michael Crichton

I inhaled Crichton growing up. Couldn’t get enough of his books and their big themes. I could have included Sphere, The Andromeda Strain, and so many others, but I settled on Jurassic Park because it best encapsulates what I think lay at the heart of so much of Crichton’s writing: the idea that humanity needs to be humble. Science and technology have enabled us to do many amazing things, but we are flawed creatures and need to recognize that sometimes we have tools that allow us to do more than perhaps we are ready for. 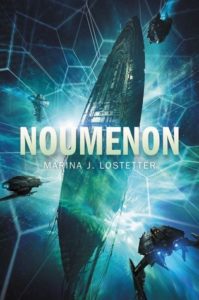 Changing our sense of time in order to survive: Noumenon by Marina J. Lostetter

In 2088, a scientist pinpoints an unusual star as the objective of humanity’s space exploration technology and a group of astronauts set out on the incredibly long journey. They use cloning technology and AI to survive the trip. Noumenon looks at the interpersonal dynamics of these clones, but wraps their relationships in a story of epic scale and scope. Lostetter’s themes reach way beyond space exploration. If humanity is to overcome some of the worldly challenges it faces, we need to develop far more effective long-term thinking. 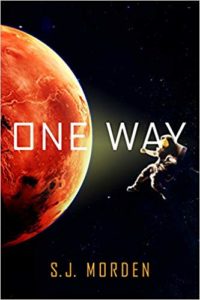 The conflict between people and corporations: One Way by S.J. Morden

Eight convicts are selected to help build the first permanent base on Mars, but when they get there, they start being murdered one by one. A tense locked-room thriller, One Way has a great deal to say about how corporations exploit the system at the expense of the individual. 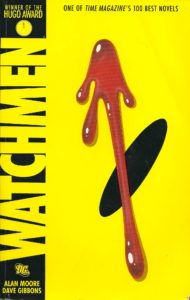 We’re all pawns in a much bigger game: Watchmen by Alan Moore & Dave Gibbons

If the Man Booker Prize can include a graphic novel on its longlist, I can slip one in here.  Watchmen is one of those books that has stayed with me ever since I first read it as a teen. Set in an alternative history in which superheroes exist in Reagan’s America, it starts with a simple murder investigation that leads to a dark plot to reengineer a world that teeters on the edge of Armageddon. It’s packed with thrills, twists, and big philosophical questions. 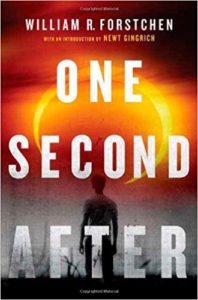 Humanity’s reliance on technology: One Second After by William R. Forstchen

One Second After tells the story of John Matherson, a history professor who lives in Black Mountain, North Carolina, and his attempts to survive after an electromagnetic pulse wipes out all electrical systems in the United States. It’s a fascinating, often disturbing look at just how reliant we are on technology and what might happen if it was all taken away from us.

British author and screenwriter Adam Hamdy works with studios and production companies on both sides of the Atlantic. He is the author of the Pendulum trilogy, an epic series of conspiracy thriller novels. His latest in the series, Aftershocks, is now out from Quercus Books. 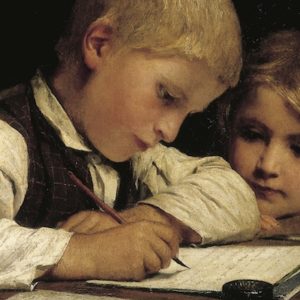 There’s a reason why the trope of the evil (or seemingly evil) child is so pervasive in fiction—from The Turn of the Screw...
© LitHub
Back to top