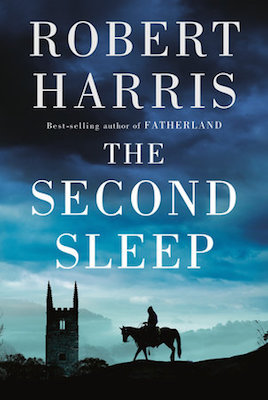 The following is an exclusive excerpt from The Second Sleep, by Robert Harris. In 1468, Christopher Fairfax, a young priest, arrives in a rural village to hold a funeral for his forbearer, when he finds innumerable strange artifacts. Wondering if these odd items, including human bones, could have had something to do with his death, Father Fairfax begins to do a little digging himself. But what he finds may not only threaten his life—it might threaten his faith.

Something woke him. He was not sure what. The room was in such darkness that between his eyes being shut and open there was no difference. The sensation was alarming, like being blind, or buried alive. He reasoned that if his candle had burned out, it must mean that several hours had passed and that his body had woken him as usual after the first sleep.

He thought he heard a man’s voice, muttering something he couldn’t quite make out. He strained to listen. There was a pause, and then it came again. He propped himself up on his elbow. Now the first voice was interrupted by a second. Two men were talking— the rolling local dialect, ye, thee, thou: low, indistinct, almost musical, like the droning of bees. They were just outside his window.

He rose from the couch and stood swaying for a moment, trying to find his bearings. He edged forward, and at once his knee struck the edge of the desk. He started to utter an oath, quickly stifled it, rubbed his knee, then reached out and began feeling along the wall until he touched fabric. He burrowed his hands into it, molelike, searching for a gap, parted the curtains, ran his palms over the small diamond-shaped panes of cold glass, found a handle and opened the window. He stuck out his head.

The men had moved on. Away to his right and slightly below him, two lights bobbed in the darkness. He guessed he must be looking out at the lane that ran along the side of the parsonage towards the church. Beyond the two lanterns were other, fainter lights, some stationary, a few moving. Far in the distance, a dog barked. He could hear the trundle of cart wheels.

Above his head, the floorboards creaked.

He shut the window and felt his way across the room to the door. He threw it open just as Agnes turned the corner at the bottom of the stairs. She was carrying a candle. Her hair was in curling papers. Over her nightdress she wore an outdoor coat, which she pulled tight around her as soon as she saw him. “Oh, Father Fairfax—what a fright ye gave me!”

“What hour is this, Mrs. Budd? Why does everyone wander about in this strange manner?”

She turned slightly and held her candle to the face of the long- case clock. “Two o’clock, sir, same as normal.”

“In Exeter, the custom between the first and second sleeps is to stick to our rooms. Yet the villagers here are abroad. What of the curfew? They risk a whipping, surely?”

“Nobody here gives much mind to curfews.” She was carefully avoiding looking at him, and he realised he was wearing only his drawers and undershirt.

He took a pace back into the study and called out through the doorway. “Forgive my lack of modesty. This middle-of-the-night wandering—the practise is new to me. Might I take another candle? Two, if they can be spared?”

“Wait there, sir, and I’ll fetch them.” Her head still averted, she went past him into the kitchen. He searched around in the dark- ness for his cassock and fastened a few of the buttons, his fingers clumsy with sleep.

“Here’s your candles, Father.” She placed them on the floor just outside the study.

He collected both, closed the door and set one upon the desk. Rather than his usual nocturnal meditation, he decided he might seek some fresh inspiration for his eulogy. What better way to take the measure of a man than by the nature of his library? He began an inspection of the shelves.

Father Lacy had a hundred books or more, some plainly of great antiquity. In particular, he had a remarkable array of volumes pro- duced by that army of scholars who had dedicated their lives to the study of the Apocalypse. Fairfax ran his finger along the titles—The Fall of Man . . . The Great Flood of Noah . . . The Destruction of Sodom and Gomorrah . . . God’s Wrath Against Babylon . . . The Ten Plagues of Egypt . . . The Locusts of the Abyss . . . The Lake of Fire . . . What a gloomy fellow he must have been, he thought. Little wonder his fellow priests had shunned him.

He took down a volume at random, Pouring Out the Seven Disas- ters: A Study of Revelation 16. It fell open at a well-marked passage:

And he gathered them together into a place called in the Hebrew tongue Armageddon.

And the seventh angel poured out his vial into the air; and there came a great voice out of the temple of Heaven, from the throne, saying, It is done.

And there were voices, and thunders, and lightnings; and there was a great earthquake, such as was not since men were upon the Earth, so mighty an earthquake, and so great.

And the great city was divided into three parts, and the cities of the nations fell.

He closed it and replaced it on the shelf. Such a collection would not have been out of place in the bishop’s library; to find it in a small parsonage in an isolated village struck him as peculiar.

He took up his candle again and moved along to the second bookcase, where his eye was immediately drawn to a shelf of small volumes bound in pale brown leather. He held the flame up close to the spines—The Proceedings and Papers of the Society of Antiquaries— and in that instant he became wide awake, for he recognised the name at once, even though he had been but a boy at the time of the trials. The organisation had been declared heretical, its officers imprisoned, its publications confiscated and publicly burned, the very word antiquarian forbidden from use. He recalled the priests in the seminary lighting a bonfire in the middle of Exeter. It had been midwinter, and the townspeople had been as impressed by the heat as by the zealotry. And yet here was a set of the society’s works still extant—and in Addicott St. George, of all places!

Lacy was a heretic: there could be no question of it now. Could a heretic be knowingly buried in consecrated ground?

For a few moments, Fairfax stared at the shelf in dismay. Nineteen volumes, with a narrow gap where the twentieth had been withdrawn. What did this mean for his mission tomorrow? Lacy was a heretic: there could be no question of it now. Could a heretic be knowingly buried in consecrated ground? Ought he to postpone the interment, however ripe the corpse, and seek fresh guidance from the bishop?

He considered the matter carefully. He was a practical young man. Not for him the fanaticism of some of his fellow younger clergy, with their straggling hair and beards and their wild eyes, who could sniff out blasphemy as keenly as a water hound unearths truffles. His instructions were to be quick and tactful. Therefore, the wisest course would be to go on as planned and pretend he knew nothing. Nobody could prove otherwise, and, if necessary, he could always square his conscience with God and the bishop at a later date.

Thus resolved in the matter, he resumed his inspection of the study. Two more shelves were entirely devoted to the same per- version. He noted monographs on burial sites, on artefacts, on inscriptions, on monuments. It amazed him that the old priest had displayed them so brazenly. It was as if the valley, with its singular geographic isolation and its contempt for the curfew, existed some- how outside time and law. There was a thick volume on the ruins of England entitled Antiquis Anglia by a Dr. Nicholas Shadwell, “President of the Society of Antiquaries.” He passed his candle quickly along the titles, tempted to linger but forcing himself not to look at them too closely, then turned his attention to the display cabinet in the corner of the room.

This was chest high, wood-framed, with a front of glass—ancient glazing, he could tell, because it was completely clear and smooth, with none of the rippling effect produced by modern glass. It was cracked in the top right-hand corner. The shelves were also made  of the finest glass, and by the light of the candle the objects they supported seemed to hover magically in midair. All of them it was illegal to possess: coins and plastic banknotes from the Elizabethan era, keys, gold rings, pens, glassware, a plate commemorating a royal wedding, thin metal canisters, a bundle of plastic straws, a plastic swaddler with faded images of storks carrying infants, white plastic cutlery, plastic bottles of all shapes and varieties, toy plastic bricks all fitted together of vibrant yellows and reds, a spool of greenish-blue plastic fishing line, a plastic flesh-coloured baby from which the eyes were missing, and, on the topmost shelf, propped up on a clear plastic stand, what seemed to be the pride of the collection: one of the devices used by the ancients to communicate.

Fairfax had seen fragments of them before, but never one in such a perfect state of preservation. He felt drawn to it, and this time, despite himself, he could not resist opening the cabinet and taking it out. It was thinner than his little finger, smaller than his hand, black and smooth and shiny, fashioned out of plastic and glass. It weighed quite heavy in his palm, pleasingly substantial. He wondered who had owned it and how the priest had come by it. What images might it once have conveyed? What sounds might have emerged from it? He pressed the button on the front, as if it might miracu- lously spring to life, but the glossy surface remained resolutely black and dead, and all he could see was the reflection of his own face, ghostly in the candlelight. He turned it over. On the back was the ultimate symbol of the ancients’ hubris and blasphemy—an apple with a bite taken out of it. 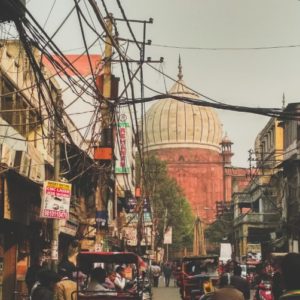 New Delhi: Crime Books in the Indian Capital New Delhi is India’s sprawling capital of twenty-two million people. Former stronghold of the British Raj and now the political...
© LitHub
Back to top