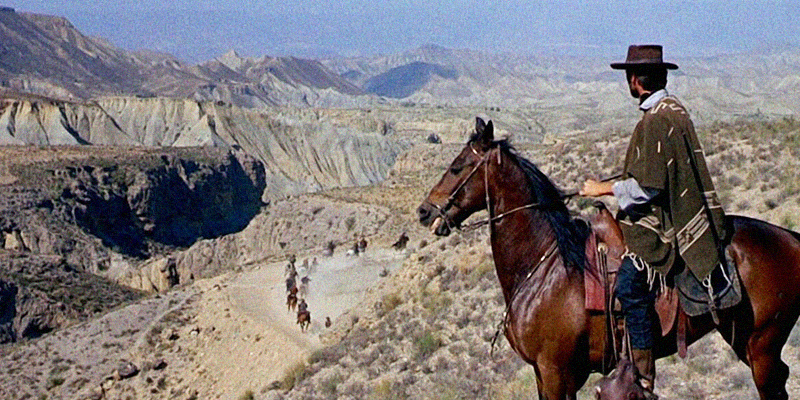 Sergio Leone filmed "For A Few Dollars More" in the Spanish desert, now a destination for tourists rather than filmmakers.

A reptilian line of hills, the Serrata del Marchante, drags itself from the east like fossilized vertebrae. Beyond it lie the windings of a bleached and twisted labyrinth. Through the haze I have an impression of ravines and riven rock, but if I stare at them too long the lines detach and lose their form, dissolving into pale glare. My eyes cannot get a grip; it is too hot to see.

Downward now on a slope of dust, past shattered canyons of grey and kidney-purple rock. The sun is high overhead. Trees are an extinct species. My boots crunch on gypsum shards which I mistake, at first glance, for broken windscreen glass. The ground is white, baked hard, interspersed with flaking plant life. I am now level with the serrata. Then it is above me. The transition from the relative greenness of the range is startling and I feel unprepared, already far out of my depth. The heat bounces from the road. Overhead power lines buzz. This is still the semi-desert fringe, not the true desert yet. But, as Kevin said, where is the line?

The woman who serves me eggs and potatoes has, I think, leprosy; her fingers and her thumbs end in blunt, shining stubs. She clumps the plate in front of me with cheerful informality and starts stacking plastic chairs. It is almost siesta time.

The town that shares the desert’s name lies on the other side of the Serrata del Marchante. Having reached the flyover of the N-340a highway—the Puente Moreno, Brown Bridge, which is, as far as I can tell, the official boundary of the Desierto de Tabernas Natural Area—I did not continue west but slunk instead towards this last outpost of civilization; food, a shower and a clean bed in the nearest one-star hotel were too tempting to turn down. I am not ready for the wilderness yet. As with much else in Andalucía, it can wait until mañana. Tabernas is a drowsy town of peeling two-story buildings painted in yellows, whites and pinks. The shade of palm trees stripes the road. All the cactuses are dead. There is a public swimming pool, a bull-ring and a ruined Moorish castle on a rocky hill. The benches on the main street are shaped like film director’s chairs.

By the middle of the afternoon it is too hot to sit outside, even in the shade, so I hide under the ceiling fan in my tiny bedroom. When I emerge the streets are gently humming with the sociable sound of families taking their evening promenade and swallows are soaring in the sky above the castle. Climbing the steep hill to get a sense of where I am, I look down on an irregular jumble of rooftops and angled walls, which, with the arid slopes behind—if it wasn’t for the Romanesque church— could be a view of anywhere from Morocco to the Middle East. Of the castle itself not much is left, only a few fallen arches and the remains of battlements; the site is littered with plastic bags and the corpses of prickly pears.

This is where, the story goes, the second-to-last Nasrid sultan Muhammad XIII, whom the Spanish called El Zagal, surrendered the keys of Almería to the Catholics.

But the view, in more ways than one, is of the west.

In 1964 an Italian film director was scouting for a location. The popularity of the ‘sword and sandal’ genre of historical epics, in which he had started his career, was on the decline, and his curiosity had turned to American Westerns. Up until then the market was dominated by clean-shaven cowboy heroes chivalrously righting wrongs, with no moral ambiguity—the good guys literally wore white hats and the bad guys wore black hats—but this Italian newcomer had ideas for something different. He had recently seen Akira Kurosawa’s masterpiece Yojimbo, the story of a rogue samurai freeing a town from evil gangs, and transposed its violent plot from Edo-period Japan to the Wild West. The rōnin became a gunslinger. Six-shooters replaced samurai swords. And the backdrop of Tabernas—empty, arid and above all cheap—became the rugged borderland between Mexico and the United States.

His name was Sergio Leone and the film, starring a handsome TV actor called Clint Eastwood, was Per un pugno di dollari, or A Fistful of Dollars.

It was a critical success and Eastwood became a star. His character, the Man With No Name—glowering, mysterious, dirty, violent, enigmatic, unshaven, with a cheroot stuck in his mouth and wearing his signature dust-caked poncho—was a new kind of antihero, a break from the boyish do-gooders who had come before. The fact that Leone spoke no English and had never been to North America was no obstacle; on set he mimed moves for the actors to follow and communicated through a translator. The lawsuit he faced for what was, in effect, an unauthorized remake of Kurosawa’s film was eventually settled out of court. He went on to make more films in Tabernas and Cabo de Gata, the rocky headland to the south, pioneering a gritty new genre that became known as the ‘Spaghetti Western’.

For a Few Dollars More came out in 1965 and The Good, the Bad and the Ugly in 1966, completing the Man With No Name’s blood-soaked trilogy. Once Upon a Time in the West, a sprawling frontier epic, was released two years after that. But Leone wasn’t the only director attracted to the desert. Since the 1960s those dry ravines, rugged escarpments and cracked hills, lit by a reliable forty-five weeks of sunshine a year, have comprised the scenery of a thousand films. A large number have been Westerns with tough-guy titles so generic they become comical—Bullets Don’t Argue, Blood at Sundown, Ten Thousand Dollars for a Massacre, A Coffin for the Sheriff, A Town Called Bastard, Kill Them All and Come Back Alone—but Tabernas has also doubled as other landscapes, both real and imagined: the deserts of the Middle East in Lawrence of Arabia and Indiana Jones and the Last Crusade, the Hyborian wilder- ness in Conan the Barbarian, and the Dothraki Sea in Game of Thrones.

From this Moorish castle, a directional pointer indicates nearby locations. To the north, a sandstone butte named Cabeza del Águila, Eagle’s Head, was the backdrop for escaping convicts in Lucky Luke and the Daltons. The bleached plain further south was where they filmed the tank battle scene in the Second World War movie Patton, and near there, on a rocky rise, I can dimly make out a cluster of unlikely structures: the walls of a stockade fort and a scattering of tepees. That is Texas Hollywood, otherwise known as Fort Bravo, which—along with Oasys Mini Hollywood and Western Leone – is one of the surviving sets where hundreds of these films were made.

Scenes are still shot there on occasion, but the sets exist largely as theme parks now. For a small entrance fee you can see daily cowboy shows complete with gunfights, stunts on horseback, saloon brawls and bordello girls. That is not Spain over there but a projection of the Old West.

Article continues after advertisement
That is not Spain over there but a projection of the Old West…I am not just walking into a desert but into a fantasy.

I am not just walking into a desert but into a fantasy.

The sun goes down in the west and I go back down the hill. Later, as I’m picking the five dying flies out of my beer, an old man in the street utters a loud ‘Yee­ha!’ He gets no response and does it again, longer and louder: ‘YEEE­ HAAA!’ A few moments pass, and he is answered by a slightly more muted ‘Yee-ha!’ from further down the road. Into view comes a purple-skinned foreigner with a grey handlebar moustache, a black leather cowboy hat, a black leather vest and, unwisely, a pair of very small black leather shorts. He looks as if he gets yee-ha’d on a regular basis and has grown accustomed to it. The old man cackles as he goes by, pleased to have provoked a reaction. The leather cowboy is accompanied by a younger woman with dyed black hair, and as they pass I catch a few English words in an affected rock and roll drawl.

They seem to be walking in a fantasy too, but I’m not quite sure what of.

In the morning the drenching golden light in the streets is cinematic. Outside my hotel a sign informs me that The Valley of Gwangi was filmed here, a 1969 ‘Western fantasy’ in which cowboys battle dinosaurs in a lost world. Sitting with coffee in the shade outside another café, I see the different populations of this small town on display, each one separate and distinct: the old señors and señoras at their gender-divided tables; the Roma women in their bright, clashing colors; the local drunk shuffling past the church in his shabby suit; the Muslim mothers in their hijabs; the Africans who sit apart, at the edges of things, watching. They are like stock characters in a film. Last night’s English cowboy was also in his costume.

I feel a twinge of panic at the thought of leaving this town, in which everyone knows their place. It feels like walking off the map. First, though, I have an appointment with Standing Eagle. 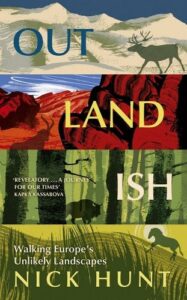 Nick Hunt has walked and written across much of Europe. His articles have appeared in the Economist, the Guardian and other publications, and he also works as a storyteller and co-editor for the Dark Mountain Project. His first book, Walking the Woods and the Water (Nicholas Brealey, 2014), was a finalist for the Stanford Dolman Travel Book of the Year. He currently lives in Bristol. 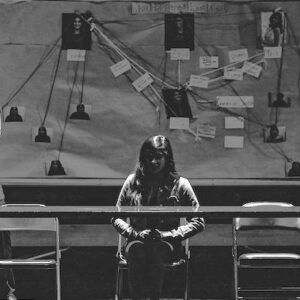 In the Netflix’s documentary, Making a Murderer, 16-year old Brendan Dassey is interrogated by two detectives who believe...
© LitHub
Back to top