On the Dark, Imagined Secrets of Pittsburgh

I’m convinced that a man who lives in my neighborhood is hiding someone inside his basement. Nobody else thinks this except me, and I have absolutely no evidence, aside from the following: There are curtains covering every one of his windows and they are never opened. His lawn is shorn like a military crew cut and there is zero landscaping—not so much as a single flower, shrub, or tree. There are never any lights or other holiday bric-a-brac decorating the house to break the monotony of beige brick. And the homeowner, whom I’ve seen fewer than five times in almost a decade, is so relentlessly average looking that it’s obvious he must be a secret psychopath.

I plan to be ready when the police and camera crews descend. I will not be the ubiquitous interviewee who says, “he seemed like a nice guy,” or “he never bothered anybody,” or “he was always so friendly.” These declarations are invariably followed by troubling revelations about how this supposedly great guy shot off rounds of ammunition in his basement every night, or was seen lugging a human-sized bundle into his car, or was caught wearing what looked like blood-stained clothing. I refuse to be that unobservant neighbor who somehow manages to miss the serial killer living next door.

Of course, you might dismiss my suspicions as no more than the vivid imagination of a writer, and that’s certainly possible, because an occupational hazard of reading and writing about crime is spotting possible criminal enterprise everywhere and in everyone. To be a writer is to be curious, or to use Pittsburgh parlance, a nebnose.

Many places would seem like a natural inspiration for crime stories, but not so much Pittsburgh. While the city is as hilly as San Francisco and the roads can be treacherous, inspiring Uber to dub the Steel City, the “double black diamond of driving,” it’s a truism in Pittsburgh, a city surrounded by water, that locals don’t like to cross rivers.  People from the North Hills stay in the north and people from the South Hills stay in the South. Entire generations of families have lived and died in a relatively small geographic area utterly convinced that it’s the best place in the world. This is a city where the people are known to be so friendly that yielding to other drivers has been adopted in an informal traffic rule known as the Pittsburgh left. Not that we don’t have our fair share of crime, or the old cobbled streets and dark alleys to inspire it, but while people often associate crime with big urban areas, I’ve always been more wary and suspicious of the seemingly idyllic suburbs and supposedly bucolic countryside. What’s really happening behind the closed doors of those tidy homes with their manicured lawns? Who lurks at the end of that tree-lined rural road? I’ve always been interested in the lives of ordinary people in these communities, who either incite extraordinary circumstances or are thrust into them. The fact that I live in the neighborhoods that I write about makes it a little more complicated.

As a person who’s always been inquisitive, it was a shock for me to discover that not everyone is wired that way and that some people consider even the most innocuous question an invasion of privacy. This is a challenge for writers because as Janet Malcolm famously observed, “Art is theft.” In order to create effective fiction or narrative nonfiction, writers have to be relentless observers of human nature, willing to pull back the curtain and expose the things people are often most reluctant to see.

It’s also true that fiction helps us to understand the world. As one of my writer friends put it, “fiction makes the world make sense.” Of course, novelists are also creating a world that isn’t there, taking the basic and banal and transforming it, in order to shape the universe as we’d like it to be. Fiction can be real life with the boring bits removed.

Crime fiction fills the role of allowing us to safely explore our worst fears. Crime fiction can also be cathartic—in real life, many crimes go unsolved, but in fiction, while there isn’t always justice, there are usually answers and a resolution.

After I published my first novel, which was about a serial killer targeting a real estate agent, I was surprised by how many of my neighbors equated the fiction with facts about me—if my characters speak crudely, then I must speak that way, and if my protagonist had a philandering husband, then my husband must also be a philanderer, and if my plot dealt with deviant behavior than I must also somehow be secretly deviant. While initially alarmed by this, I’ve come to find it amusing; it seems like a fair trade-off that they make these assumptions, when I’m always on the lookout for their interesting quirks or questionable behavior.

Once, after attending a local holiday party, a neighbor called to inform me that I didn’t have permission to use her life story in my next novel. Narcissistic much? Swallowing the urge to tell her that she wasn’t interesting enough for fiction, I politely explained that I wouldn’t do that, only to have her insist that she knew I kept a “database” with information about everybody. That still makes me smile, not least because as any member of my more tech savvy family can attest, I barely understand the term “database,” much less how to make one.

What I didn’t tell this neighbor is that like most novelists, I pull from real life all the time, but I don’t create characters and situations whole cloth from reality. It’s often a bad idea to do that in fiction; as I tell my students, effective storytelling is about facts in service to fiction, not fiction in service to facts. While some authors have done it quite successfully, the danger in creating characters or plots that are just thinly disguised versions of real people or real crimes is being unwilling or unable to alter the behavior of these characters or the plot if the story demands it, e.g. “That’s not how he/she acts.” And if you write about the places where you live, as I do in my books set in Pittsburgh, than you run the additional risk of being alienated by neighbors, family, or friends if they recognize themselves in your work.

This is one of the reasons I’m biding my time and not sharing my suspicions about my neighbor with anyone else in the subdivision. I’ll just keep watch, ready to call the police the moment I spot something a little more tangible. I could be wrong; this man could just be as boringly beige as his house. And why risk not being invited to the annual neighborhood picnic? After all, who knows? Another one of my neighbors could be a serial killer, too.

Rebecca Drake is the author of the novels Don't Be Afraid, The Next Killing, The Dead Place, which was an IMBA bestseller, and Only Ever You, as well as the short story "Loaded," which was featured in Pittsburgh Noir. A former journalist and native New Yorker, Rebecca currently lives in Pittsburgh, PA, with her husband and two children. 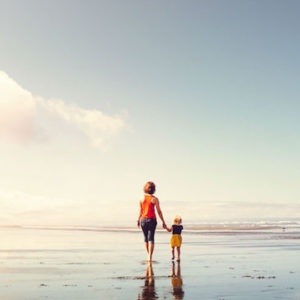 The Woman in the Window, A.J. Finn (William Morrow) Already a publishing sensation, with movie rights bought and rights...
© LitHub
Back to top