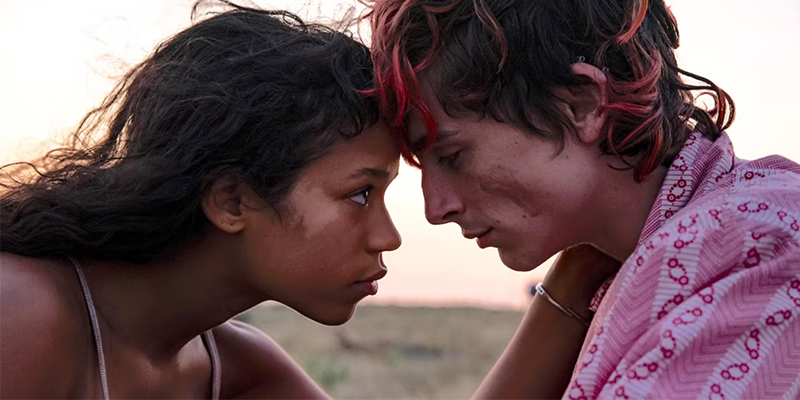 The Teenage Cannibal Movie for Our Time? Bones and All Ate Me Right Up

I traveled halfway down into Staten Island to see Bones and All, Luca Guadagnino’s emotional teenage-cannibal fairytale, during the New York Film Festival, and I’d wander farther and longer if I had to, if that’s the only way I could see it a second time. The film, based on the 2015 novel by Camille DeAngelis, is a haunting, heartrending movie about two teenage runaways who meet and travel through the impoverished backwaters of 1980s Midwest America together, trying to find a shred of community after feeling alienated from mainstream society, and dealing with the loneliness, guilt, and self-loathing that has long eaten them up inside.

The two—Maren (Taylor Russell) and Lee (Timothée Chalamet)—are different. They are “eaters,” people with uncontrollable cannibalistic urges, and slowly they have shed (deliberately or as a result of their condition) their bonds with most of the people they know. When Maren and Lee meet, she has turned 18 and been abandoned by her father, who has moved from town to town with her, concealing her from the police, whenever she has attacked someone in her life. He has had too much, and now that she is an adult, he leaves her on her own. Lee’s story is different—he has separated himself from his family since the death of his father, coming back to visit his mother and sister only once in a while.

Since her father left, Maren has been trying to track down her long-lost mother, whom she suspects might know something about her anthropophagus compulsions. Her instincts are correct; cannibalism, in the film, is represented as a rare affliction, likely a genetic condition—an unavoidable, overwhelming internal tendency that can only be abated, not quelled entirely. Maren doesn’t even know anything about what she is, but she learns fast. Before she runs into Lee, she encounters a mysterious man known as Sully (Mark Rylance), who has smelled her blocks away from where she waits at a bus stop and approaches her in the night. In the short time they spend together, he acquaints her with the drabs of eater lore he knows, teaches her a bit how to hone her instincts, especially her sense of smell. Although she is unsettled by him, she is clearly relieved to discover that she is not alone.

Eaters’ qualities might resemble vampires, but they hunt and eat like werewolves—on their hands and knees, biting off raw flesh, ripping it from the (sometimes alive) bodies of their victims. This is clearly horrifying, but Sully, thanks to Rylance’s doe-eyed, marble-mouthed, unassuming performance, helps to represent “eating” for the all-around tragedy it is. When telling Maren how he first discovered his urge, he reflects on a memory from his childhood: “Ate my own granddad while they were waiting on the undertaker.” To cover it up, he told his family that “animals came and did it.”

The film has many moments like this, of multifaceted revulsion and heartache. It skillfully cultivates that “eating” is just as terrifying for the eaters as it is for the people around them; they do not understand their own urges, or even want them, and because the condition is so grisly and often results in their abandonment and alienation from their families, there are no figures to teach them. And for the mainstream world, there are no opportunities to learn about eaters and work to safely include them. As a result, “eaters” are hyper-marginalized, often living unhoused, as drifters and vagrants.

By and large, they don’t finish school, they don’t have jobs, they barely even have friends. The only time they have shelter are when they kill someone—Lee teaches Maren to take the keys and driver licenses of the people they eat, to go spend the night in a warm house. Eaterism is a metaphor for many things, throughout the film, but it primarily stands for economic disenfranchisement. There’s a reason that, in scenes of peak impoverishment and itinerancy, there are “Reagan & Bush” stickers peeking out of the mise-en-scène.

Eaterism is a metaphor for many things, throughout the film, but it primarily stands for economic disenfranchisement.

Bones and All is a road movie—following Maren and Lee as they try to find Maren’s mother, and encounter various eaters along the way. They are all sinister figures. Rylance’s Sully is pathetic but in a way that seems dangerous, while an encounter with a repugnant redneck eater named Jake (an entrancing, nearly unrecognizable Michael Stuhlbarg) seems incredibly precarious, especially when he introduces his lackey (the director David Gordon Greene), a non-eater policeman who wants to become an eater and has therefore eaten people without the inherent need to do so. Like a vampire’s familiar, he follows Jake around, preying on people for the thrill. These figures are remorseless, opportunistic killers.

Although it clearly traffics in horror tropes, the film aesthetically resembles Agnes Varda’s Vagabond more than any other movie I can think of. Both Maren and Lee, who are sweet and loving people, struggle with the monstrous guilt of their inexpugnable natures. The knowledge that they only eat people to survive isn’t enough to stave off their demons. “We murder people…” she cries to Lee one day. “We ruin lives we don’t even see?” Lee yells back, “How dare you make this harder!”

They are burdened by self-loathing, self-condemnation, and shame—and desperately try to find meaning and redemption during their cross-continental migration. Underneath it all, Bones and All is a story of adolescent self-discovery, struggles with identity, and apprehension about the worth of trying to subsist by killing things, with the only reward being living another day in a cruel, desolate world.

Although the film is gruesome and macabre by its very nature, Guadagnino also shows remarkable restraint, churning out a movie more memorable for its psychological trauma than its physical ghastliness. Perhaps the most haunting of all the film’s scenes of mental struggle with “eaterism” is Sully’s revelation of how he remembers and tries to pay homage to his victims, by removing their hair, post-ravishment, and braiding it into one giant rope. The film is clear that eaters are figures of doom—for those around them, but also for themselves. If they don’t fully give into it, embracing their inner animal to a grisly extent, they are consumed by the agony of the harm they have done to others, driven to grief by their own forsakenness.

The most fascinating thing in the film is various characters’ insistence that there are codes among the eaters, social rules or etiquette that, if practiced on a wide scale, might make the whole thing seem a bit less messy. Similarly, there is an inkling of mythology to “eaterism”; when Maren tells Lee about Sully and his hair rope, Lee remarks that he thinks he has heard of that guy. There is a hint of Stephen King “worldbuilding” (forgive the overused term), a bit of folklore to this movie. There is almost a culture, almost a community here—the eaters in Bones and All are so close to making something meaningful out of their wretched existences, and yet, so very, very far. 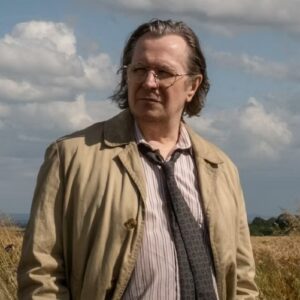 This month brings some big highlights, including a new season of Slow Horses, a long-awaited adaptation of Louise Penny's...
© LitHub
Back to top