On the Nutshell Studies, Poetry, and the Art of Restraint

When I taught Truman Capote’s In Cold Blood to freshman at John Jay College of Criminal Justice in New York City, I began with a preamble, explaining that a quadruple homicide in 1959 was even more shocking than it would be today, that people didn’t lock their doors in Holcomb, Kansas because they had nobody to fear. Skeptical faces returned my efforts. When your audience has been raised on Dexter and Saw, shotguns can seem quaint.

I thought of my former students recently, on first seeing the “Nutshell Studies of Unexplained Death”—meticulous, dollhouse-sized recreations of suspected crime scenes. Perhaps, I thought, if I’d only had a simulacrum of the Clutter murders—a miniature version of the farmhouse where a family was woken in the night, bound, and shot—that might have piqued my students’ interest.

The Nutshell Studies were created in the 1940s and 50s by Frances Glessner Lee. When she was young, Lee’s family prevented her from attending college and discouraged her interest in forensics. After her brother’s death, she finally had the freedom and financial resources to pursue her unique passion. She became a trailblazer later in life, offering workshops to law enforcement professionals on the art of collecting evidence. Her creations were central to this process, and Lee is now often called the “mother of forensic science” because of her role in bringing rigor to crime scene examinations.

We can approach them as wannabe Sherlocks, homing in on the single unlaced shoe of an apparent suicide victim. Or, we can see them through the lens of admirers, marveling at the precision…

Lee’s dioramas were originally used by the Department of Legal Medicine at Harvard, a program for investigators that she helped found. Each model is handcrafted, and every detail—every book, bottle, and half-smoked cigarette—is intentional. They are based on true reports and even accompanied by witness testimonies. In “Red Bedroom,” for example, a prostitute was found by her landlady who recalled passing the open door of the victim’s room and calling out without receiving a response. Viewers of that recreated room might notice the non-gruesome details first. The flowered wallpaper or the chic red coat. Eventually, we turn our attention to the knife and slit throat, but there’s also the rag with blood flecks, not to mention the suitcase and open dresser drawers. Which is to say, there are at least two ways to view the Nutshells. First, we can approach them as wannabe Sherlocks, homing in on the single unlaced shoe of an apparent suicide victim. Or, we can see them through the lens of admirers, marveling at the precision, how realistic the fake footprints in the fake snow look. At least, these are choices available to casual observers. The works are still used by the Maryland Office of the Chief Medical Examiner as teaching tools. The viewers there must surely have higher demands on their time.

The Nutshells were on display recently at the Renwick Gallery, part of the Smithsonian American Art Museum in Washington, D.C. but will soon return to their day jobs at the CME’s Office. The experience of standing in front of a single display was—for me at least—akin to reading a poem. I had an emotional reaction to the scene, a feeling stirred by the totality, before noticing particulars. Often when I read a poem that I love, I can’t say precisely how the images and phrases are working together, at least not at first. And to be honest, I don’t always want to dissect a beloved piece—I don’t need to see the wires to know that it runs. This speaks perhaps to a problem with how poetry is sometimes taught, as a puzzle that must be solved. I’ll confess, though, that I did hope to solve Lee’s case studies. I hoped that as a mystery writer, I might piece together a woman’s flushed cheeks and her off-kilter tablecloth and have an epiphany, a certainty that I’d at least determined whether the death was accident, suicide, or murder. Similarly with a poem, I hope I’ve determined the significance of that panic button and idling tractor in James Galvin’s “Show and Tell.” I’ve certainly read it enough times. But there’s always my faithful companion—doubt. It’s probably for the best that I’ve never been selected for a jury. 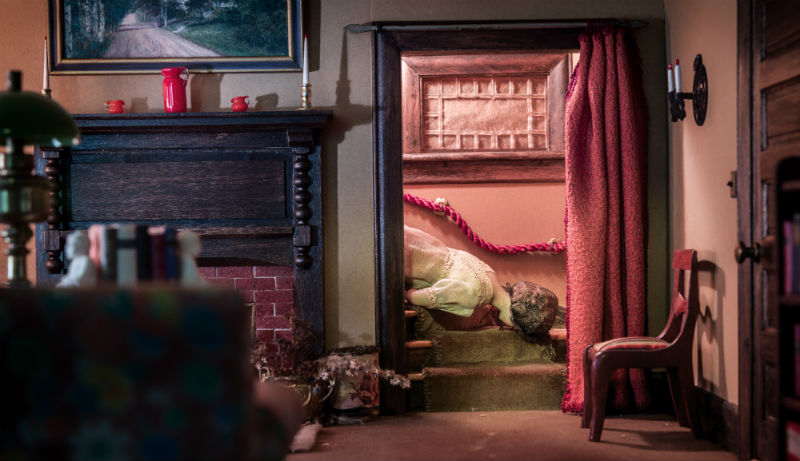 One deduction I do feel confident sharing is that the nutshells represent a gray space between art and investigation. Recently, the field of criminology has begun to recognize flaws in practices that were once considered foolproof. For example, bite mark comparisons have led to wrongful convictions as have DNA matches (the later often because of human error). Even the way detectives interview victims has changed with the acknowledgment that people who have experienced trauma can demonstrate similar traits to people who are lying. Gaining the trust of a victim or witness is not exactly a science, though there are best practices. Rules exist, yes, but people—like poems—are not jigsaw pieces. Detectives must be careful, but also flexible. Some might even argue sensitive.

At John Jay, I knew that many of my students weren’t excited about analyzing, say, Jimmy Santiago Baca’s memoir, but they were practicing skills with real-world applications. Their ability to recognize and interpret details might make the difference between a murder solved and one rotting in a cold case filing cabinet. (Let the record show that most students enjoyed Baca’s A Place to Stand. It was the essay writing they resisted.) Reading poetry, we learn to interpret, but also to doubt. I recently finished reading Terrell Jamal Terry’s collection Aroma Truce and was struck by the poet’s uncommon humility and his comfort with doubt. In “The Book Closes the Book,” a prose poem, Terry writes, “I believe there is little sense for arrogance when bees must hover.” His acceptance that what humans can do will never be as impressive as a bee in flight struck me as the ideal attitude for a poet, and why not for a detective, too?

When I started teaching, I worried about filling silences, but at John Jay that was rarely a problem. These young adults had plenty of opinions, and those opinions were often smart, unique, and based on real-world experiences in their New York City neighborhoods, the ones far from any Big Apple Bus Tour. At least once a semester, they wanted to talk about the homicide detective’s exam. You can now take a faux version online to see if you’d make the cut. At the time, it was a nebulous undertaking that intimidated even the most confident members of my classes. I researched this and other aspects of their intended careers, so that I could better relate to them during office hours. I soon became fascinated by their possible futures, so far from the safe world of writing and teaching.

Article continues after advertisement
Reading poetry, we learn to interpret, but also to doubt.

I never intended to write mysteries in addition to poetry, not even after pleasant afternoons spent browsing the now closed Murder Ink bookstore on the Upper West Side. Poetry was my first and—I assumed—my only love. But being interested in my students made me interested in the fictional depictions of their dream jobs. It didn’t hurt that I’d been raised on Nancy Drew. And there are certainly inspiring examples of contemporary poets who write noir, including Chris Abani and Melissa Ginsburg. But it took me awhile to figure out what I could use from writing poetry in writing mysteries. I ran into what I think of as the Dog in the Corner problem. In a poem, the family pet can growl in line ten even if it hasn’t been mentioned before. In a story, that sort of behavior irritates readers. Where did this dog come from, they would ask. Has it been here this whole time?

Eventually I realized that one link between poetry and noir is restraint. That might feel like a funny word to apply to crime novels, which are inherently violent, but it’s the stretch after gunshots and knife wounds that interests me. Grandly, how do humans react to traumatic circumstances? Practically, what’s the significance of a cracked window or untouched whiskey glass? In a mystery, a snakeskin in the front yard might be a clue, not just a way to evoke a rural setting. Similarly, in a poem, we resist the introduction of unnecessary objects or words. 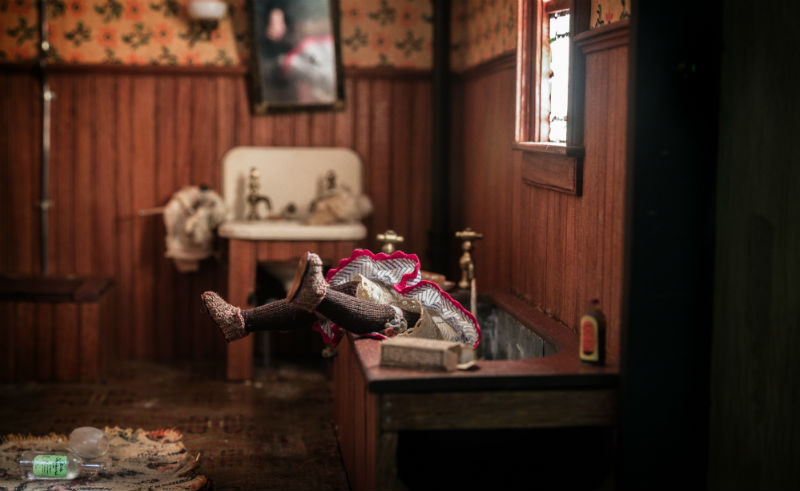 I was reminded of the importance of restraint when looking at Lee’s nutshells, the deliberately open oven door, the placement of unread mail. Blood splatter angled in the right direction, and the doll’s cheeks painted the correct shade to represent asphyxiation or the hour of postmortem lividity. In one particularly macabre display called “Burned Cabin,” I noticed the non-singed items as much as the blistered bed frame and charred dresser. Specifically, there is one plaid necktie draped with such care that it’s hard not to imagine the man whose hands were on that fabric hours before his passing. That tiny detail functions much as it would in a poem.

I tell beginning poetry writers that in the specific lies the universal. There’s a tendency to want to reach all readers through abstract terms, a lot of souls and sorrows having a get-together with nothing to bind them to the ether. The result of that approach can be quite the opposite than intended—reaching no readers at all. What we really need to understand someone’s humanity is something akin to that tie in Lee’s Nutshell, a source of pride for a man with few possessions. A man burned so badly that his skull is visible; he’s been stripped of all obvious identity markers. The first poem of Emily Fragos’s new collection, Saint Torch, is “The Sadness of Clothes,” in which pants, shirts, and coats wait for their owner to return:

…Words have that kind of power
you remind the clothes that remain in the drawer, arms stubbornly
folded across the chest, or slung across the backs of chairs,

or hanging inside the dark closet. Do with us what you will,
they faintly sigh, as you close the door on them.
He is gone and no one can tell us where.

The garments in this poem and the one in Lee’s “Burned Cabin” function as what T.S. Eliot might call the “objective correlative.” That is, they translate an unnameable emotion for their audience. Colloquially? They show rather than tell.

Guests visiting the Lee exhibition were given small flashlights to peer inside her cases, but even so, I’m sure I missed important clues. I went three times and yet when later watching a Sunday Morning special about the show, I murmured at my television screen in surprise, “There was blood on her face the whole time.” Wouldn’t it have been fun to show these to my John Jay students? Perhaps I’ll be invited back someday. And instead of ruing a missed opportunity, I can introduce the nutshells to my current creative writing classes, let them decide for themselves if a crime scene is anything like a poem. 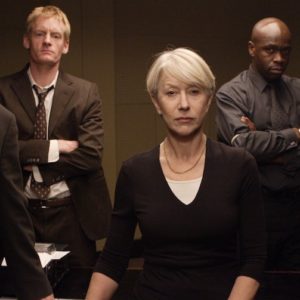 Do you remember that great Eurythmics song, "Sisters Are Doing it For Themselves?" The music has effortlessly stood the test...
© LitHub
Back to top