What famous crime stories and films borrow from theater

Real life criminals might frighten us, anger us, even disgust us, but one thing they rarely if ever do is bore us. Sometimes they even play out our fantasies: who hasn’t daydreamed of quietly putting a shiv into the pain-in-the-ass boss or pulling off a successful heist and retiring to a life free of financial burden? Real life criminals also pick at the scab of our terrors: torture, murder, kidnapping, and other violent invasions of our lives.

The bravado of crime is pretty heady stuff, grab-you-in-the-chest-and-rip-out-your-heart stuff. And yet, as every journalist knows―and lives by the famous dictum: If it bleeds, it leads―we can’t get enough of it.

Here’s one explanation, one I’ve thought about for a long time and which colors my crime fiction writing: real life crime, with its danger and sinister excitement, its characters doing extreme things and living extreme lives, is epic drama, the stuff of theater. I’ll go further and say crime is theater, a grand pageant where humanity’s most profound themes play out: life, death, good, evil, luck or desperation, justice or the lack of it, even humor. The players in these dramas are themselves theatrical in concept: heroes and villains, slick operators and clowns, predators and prey, the innocent and guilty; and perhaps most theatrical of all, those characters who embody all of it.

Every crime is therefore a performance acted out by criminals in plots often carefully scripted but with unexpected twists requiring quick-thinking life-or-death moments of ad lib.

Crime fiction writers understand this. We’ve understood it since the ancient Greek dramatists perfected the archetypes who carry out the bloody consequences of lust and greed.

It’s no wonder, then, that crime fiction translates so well from the written word to the performing arts: stage plays, film, even opera.

The list of crime novels or short stories which have been successfully transferred to performance media is long, and everyone reading this essay surely has their favorites. Maybe yours is a silver screen noir adapted from a Golden Age pulp, or a tea-and-cookies movie made from a curl-up cozy. I beg your indulgence while I present a few favorites of my own. Having grown up in New York City and taken to Broadway shows since I was a tot (when my parents didn’t have to rob a bank to afford tickets. Oh, the irony!), my sense of the theatrical is therefore embedded in my crime fiction author’s DNA.

When I read a crime or mystery story, or watch a stage play or film adapted from that story, it tends to fall into one of three categories, though there is often overlap: Crime as Theater; Criminals as Performers; and Crime Solvers as Performers.

Of the first, Crime as Theater, The Godfather trilogy must take pride of place. After all, the thing’s practically an opera, an idea reinforced by the third film in the cinema trilogy which moves toward an actual opera. And like so much Italian opera, there’s scheming, betrayal, and (almost) everybody dies.

I put Alfred Hitchcock’s Rear Window, based on a Cornell Woolrich short story, into this category of Crime as Theater, too. From the film’s very beginning, the opening credits reference a curtain going up on a stage show with the rising window shades opening onto the scene of the action: the courtyard and its several apartment windows. Through the rest of the film, the action plays out in these stage-like window settings: assorted comedies and dramas with murder at stage center.

There’s an operatic element to Rear Window, as well. After the credits, at the film’s open, while the camera pans around the courtyard and into the various apartments and the lives of their inhabitants, with a glimpse beyond to the street, we hear birds chirping, an alarm clock ringing, music and commercials from a radio, children shouting and playing, traffic from the street; all of it blending into a multi-voiced urban chorus. The opera references show up again and again as visual or spoken “arias” performed by various neighbors: the couple on their fire escape lamenting the death of their dog; the sickly soon-to-be-murdered wife who berates her husband; the newlywed groom exhausted by his bride’s insatiable desire; Miss Lonelyhearts, who contemplates suicide. Throw in Grace Kelly’s ballet-like scaling of the garden wall and fire escape and you have yet another element of grand opera’s spectacle of combining drama, music, and dance.

While Rear Window pays homage to the stage and opera, the Broadway stage itself is no stranger to crime fiction. So let’s all give a round of terrified applause to the Broadway gang who brought us Sweeney Todd: The Demon Barber of Fleet Street. The musical, an operetta/near opera, was based on a series of Victorian-era serialized stories known as “penny dreadfuls.” First dramatized by Christopher Bond for a 1973 stage play, the murderous barber strutted upon the stage most prominently in the 1979 production featuring the spine-chilling music and lyrics of Stephen Sondheim. With the music’s deep sonorousness, the show’s large chorus, lavish costumes, doomed love stories, and central theme of vengeance, this is crime as theater at its most theatrical, a pageant of blood, evil, and homicide as comedy (the hilarious song “A Little Priest,” celebrating the tasty tang of human flesh baked in a pie) and tragedy (the heartbreak of “The Barber and His Wife”).

Speaking of opera, there’s been enough knifings, poisonings, and chokings on the opera stage to satisfy death cults for eternity. My favorite among these musical murders is Bizet’s Carmen. It’s got all the zesty bits which make for an evening’s dark and juicy entertainment: love, lust, thievery, jealousy, murder. Adapted from Prosper Mérimée’s 1845 novella, the opera, despite Bizet’s extravagant music, is rather noir in feeling. We are plunged into the Gypsy underworld, where survival is a brutal game and love is ruthless. Bizet’s Carmen is crime sung as savage passion.

But what of the central players in the theater of crime? What of literature’s criminals who’ve made it to the stage or screen? The list here would be lengthy, running from, say, Anton Chigurh in Cormac McCarthy’s No Country for Old Men, through Marcel Allain and Pierre Souvestre’s man-behind-every-unsolved-crime, Fantômas, Patrick Bateman in Brett Easton Ellis’s American Psycho, and of course that Napoleon of crime, Arthur Conan Doyle’s Professor Moriarty, and on and on. Grand performers all, strutters extraordinaire across their pages and stages of crime. But I must give the award for Best Performance in a Criminal Role to Phyllis Nerdlinger, James M. Cain’s femme fatale-cum-black widow in his brilliant novella Double Indemnity. Sure, it’s a criminal performance less showy than the wild homicidal imaginings of Bateman or less exotic than the mystery of Fantômas, but for me Phyllis Nerdlinger is the complete performer, an actress so involved in her role she plans every detail right down to the costuming and make-up: swanning before a mirror in black widow’s weeds before the murder of an in-the-way-wife, anyone?

The film adaptation of Double Indemnity, co-written by Golden Age master Raymond Chandler and the film’s director Billy Wilder, made changes from Cain’s book: Phyllis Nerdlinger is Phyllis Dietrichson; partner in crime Walter Huff is Walter Neff; and the ending, so succinct and chilling in the book, edges close―but thankfully doesn’t crossover―to the sentimental. But Chandler and Wilder kept the essential Phyllis, a woman who knows how to script, costume, and strut her stuff as a murderous dame.

Criminals, though, are only half the cast of characters in crime’s theater. Playing opposite them are their pursuers, the crime solvers who give the plot the tension of the chase.

Like their criminal counterparts, the best crime solvers play their roles with panache. Though there are many contenders, everyone from Nancy Drew to Easy Rawlins, there’s really no contest: the award for Best Performance in a Crime Solving role must be shared by crime fiction’s two greatest detective-performers: Agatha Christie’s Hercule Poirot and Conan Doyle’s Sherlock Holmes.

Let’s face it, no one does a monologue better than Poirot, whose summing up and unmasking of the killer at the end of every case is a tour-de-force of stagecraft. It’s almost as if a spotlight clicks on the moment he opens his mouth and intones, “Mesdames et Messieurs…”

In the case of Holmes, logic and reasoning may be his method, but theatricality is his means. He is a master of costuming and make-up, able to use his face and body as actor’s instruments in order to insinuate himself into any situation. It’s make-believe to make his prey believe.

So it’s no accident that my series protagonist, art thief and smuggler Cantor Gold, lives among the showfolk in New York’s Theater District. What better place for her to understand what it takes to star in crime’s theater? As she says in her exchange with a cop in the latest book, Hunting Gold: “I light a smoke, make the guy sweat a little. Hell, I’ve lived in the Theater District long enough to know how to milk a performance.”

Well okay then: curtain up, light the lights, cue the actors and let the mayhem begin. 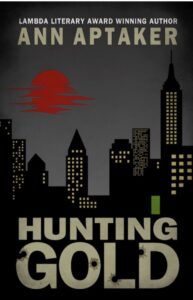 Photo taken from Donna Stirrup’s London production of Tosca from 2016.

Native New Yorker Ann Aptaker’s first book, Criminal Gold, was a Golden Crown Literary Society Goldie Award finalist. Her next book, Tarnished Gold (Book Two in the Cantor Gold Crime Series), was honored with a Lambda Literary Award and a Goldie Award. Told from the point of view of a dapper, custom-tailored lesbian art thief and smuggler, and set in mid-20th century New York, the Cantor Gold series resurrects the outlaw spirit of lesbian life, its daring and sensuality. Ann’s short stories have appeared in two editions of the crime anthology Fedora, edited by award-winning crime author Michael Bracken. Her flash fiction story, “A Night In Town,” appeared in the online zine Punk Soul Poet, and another flash fiction story is included in the anthology Happy Hours: Our Lives in Gay Bars, edited by Lee Lynch and Renée Bess. Ann still occasionally curates and designs art exhibitions, is an art writer for various New York clients and a contributing writer to the children’s science television show Space Racers, and is an adjunct professor of art and art history at the New York Institute of Technology. 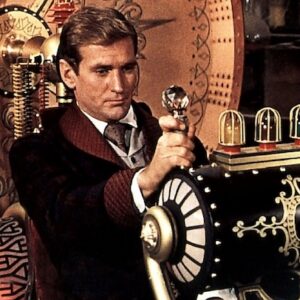 What would it be like to travel back in time? That depends on whether you’re ready for it. If you’re hopping into a time...
© LitHub
Back to top