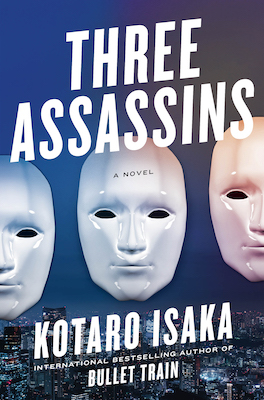 The following is an exclusive excerpt from Three Assassins, the follow-up to the internationally bestselling Bullet Train, by Kotaro Isaka, translated by Sam Malissa. Read a review of the new film adaptation of Bullet Train here.

LOOKING OUT AT THE CITY, Suzuki thinks about insects. It’s night but the scene is ablaze with gaudy neon and streetlamps. People everywhere. Like a writhing mass of luridly colored insects. It unsettles him, and he thinks back to what his college professor once said: ‘Most animals don’t live on top of each other in such great numbers. In some ways, humans are less like mammals and closer to insects.’ His professor had seemed pleased with the conclusion. ‘Like ants, or locusts.’

‘I’ve seen photos of penguins living in groups all bunched together,’ Suzuki had responded, gently needling. ‘Are penguins like insects too?’ His professor flushed. ‘Penguins have nothing to do with it.’ He sounded endearingly childlike, and Suzuki had felt that he wanted to be the same way as he got older. He still remembers it.

Then a memory of his wife flashes through his mind. His wife died two years ago. She used to laugh at the story about his professor. ‘You’re supposed to just answer, “You’re absolutely right, professor,” and then everything works out,’ she used to say.

It was certainly true that she loved it anytime he had agreed with her and said, ‘You’re absolutely right, honey.’

‘What are you waiting for? Get him in the car.’

Hiyoko’s urging startles him. Suzuki shakes his head to ward off the memories, then pushes the young guy in front of him. The guy tumbles into the back seat of the sedan. He’s tall, blond hair. Unconscious. He has a black leather jacket on over a black shirt, with a pattern of little insects. The unsavory pattern matches the guy’s general unsavory vibe. Also in the back seat, on the other side, is a girl. Suzuki had forced her into the car as well. Long black hair, yellow coat, in her early twenties. Her eyes are closed and her mouth slightly open as she sleeps sprawled on the seat.

Suzuki tucks the guy’s legs into the car and closes the door. ‘Get in,’ says Hiyoko. Suzuki gets in on the passenger side.

The car is parked just outside the northernmost entrance to the Fuji­ sawa Kongocho subway station. In front of them is a big intersection with a busy pedestrian crossing.

It’s ten thirty at night in the middle of the week, but this close to Shin­ juku things are busier after dark than they are in the daytime, and the area is thronged with people. Half of them are drunk.

‘Wasn’t that easy?’ Hiyoko sounds totally relaxed. Her white skin has a luster like porcelain, seeming to float in the dark car interior. Her chestnut hair is cut short, coming just to the top of her ears. Something about her expression is cold, maybe because of her single eyelids. The red of her lip­ stick shines brightly. Her white shirt is open down to the middle of her chest and her skirt doesn’t quite reach her knees. She’s apparently in her late twenties, same as Suzuki, but she often shows the craftiness of some­ one far older. She looks like a party girl, but he can tell she’s sharp, with the benefit of a proper education. She’s wearing black high heels, and has one foot on the brake. It’s amazing she can drive in those, he thinks.

‘It wasn’t easy or hard, I mean, all I did was get them in the car.’ Suzuki frowns. ‘I just carried these two unconscious people and put them in the back seat.’ I take no further responsibility, he wanted to say.

‘If this sort of thing rattles you, you won’t get very far. Your trial period is almost over, so you better get used to jobs like this. Although I bet you never imagined you’d be kidnapping people, huh?’

‘Of course not.’ Though the truth is that Suzuki isn’t all that surprised. He never thought his employer was a legitimate company. ‘Fräulein means “maiden” in German, doesn’t it?’

When she says that name his body tenses. ‘The father?’ That is, the CEO. ‘Obviously. His idiot son could never come up with a company name.’ Suzuki has a momentary vision of his dead wife and his emotions boil. He clenches his stomach and feigns calm. The idiot son, Terahara’s son – anytime Suzuki thinks of him he can barely contain himself. ‘I just never thought that a company with a name that means “maiden” would actually prey on young women,’ he somehow manages to say. ‘It does seem strange.’

Hiyoko may be the same age as Suzuki but she’s been with the company for a long time, and has the according rank. In the month since Suzuki joined as a contractor, he’s been reporting to her.

As for what he’s been doing in that month, it was all standing in shopping arcades, hailing passing women.

He stood in the busy spots, calling out to women walking by. They would say no, they would ignore him, they would swear at him, but he still kept trying. Almost all of the women just walked away. It had nothing to do with his delivery, effort, technique or skill. They scowled at him, they looked at him warily, they avoided him, but still he kept calling out to every woman who walked by.

But there was usually one woman each day, maybe one in a thousand, who showed interest. He would take her to a cafe and give her a pitch for makeup products and diet drinks. He had a basic script: ‘You won’t see the effects right away, but after about a month you’ll see dramatic changes.’ He would improvise, saying whatever felt most appropriate, then show her the pamphlets. They were printed in color, full of graphs and figures, but not a single thing written in them was true.

The gullible girls would sign an agreement right then and there. The more suspicious ones would leave saying they’d think about it. If he could sense that there was still a chance, he would follow them. After that, another group would take over, far more persistent, starting their illegal solicitation. They would force their way into the woman’s home and refuse to leave, keep constant surveillance on her, until she finally gave in and signed the agreement. Or so Suzuki understood. But that part of the arrangement was still all hearsay to him.

‘Well, you’ve been with us for a month. Shall we take you to the next level?’ Hiyoko had said this to him an hour earlier.

‘I can’t imagine you planned to spend the rest of your life soliciting women on the street.’

‘Well, I mean,’ he answered vaguely, ‘the rest of my life is a long time.’ ‘Today’s job is different. When you get someone into a cafe, I’ll be coming with you.’

‘It’s not that easy to get someone to listen,’ he said with a pained smile, thinking of the last month.

But for better or for worse, inside of thirty minutes Suzuki had found two people willing to hear him out. The guy and girl who are currently passed out in the back of the car.

First the girl showed interest. ‘Hey, don’t you think if I lost a little weight I could do modeling?’ she asked the guy casually. He answered encouragingly, ‘Sure, babe, you could definitely be a model, for sure. You could be, like, a supermodel.’

Suzuki called Hiyoko, took the couple to a cafe, and started introducing products as he normally would. Whether it was because they were young and stupid or just gullible, the young man and woman seemed almost comically willing to go along with what Suzuki and Hiyoko were pitching. Their eyes lit up at the barest of compliments, and they nodded enthusiastically at all the bogus data from the pamphlets.

Their complete lack of skepticism was enough to make Suzuki feel concerned for their futures. He had a surge of memories of his students from when he was still a teacher. The first place his mind went, for some reason, was to one poorly behaved kid. He remembered the boy saying, ‘See, Mr Suzuki, I can do good too.’ He was always acting out, and the other students didn’t like him much, but one time he surprised everybody by catching a purse-snatcher in a shopping district. ‘I can do good too,’ he had said to Suzuki, smiling with both pride and embarrassment. Then he said, ‘Don’t give up on me, teach,’ looking like a much younger boy.

Come to think of it . . . The guy in front of him flipping through the pamphlet, face pockmarked from acne scars, somehow reminded him of that student. He knew he had never met this person before, but the resemblance was striking.

Then he noticed that Hiyoko had gone to the counter to order refills of coffee. He took another look and saw that she was doing something with her hands over the cups, then realized: she was drugging the coffee.

Before long the guy’s and girl’s eyes glazed over and their heads started sagging. The girl said, ‘They call me Yellow, and he’s Black. Just nick-names, you know? That’s why I’m wearing a yellow coat, and he’s dressed in black.’ Then she mumbled, ‘Hey, I’m like, sleepy.’ And she nodded off. Next to her, the guy said, ‘Yeah, but my hair’s blond, and yours is black,’ slurring nonsensically. ‘Why is that . . .’ Then he passed out too.

‘Depending on how we use them, these two dummies could make us some decent money,’ she says, sounding bored.

Would you do this to my students? Suzuki has to tell himself not to ask it out loud. ‘Are we . . . just staying here?’

A sense of foreboding runs up his spine. ‘Different, how?’

The Creative Life and Death of Bruce Montgomery, aka Edmund Crispin 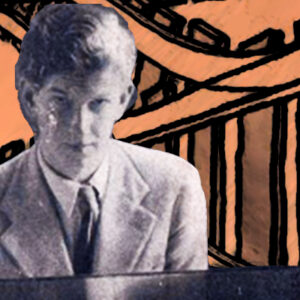