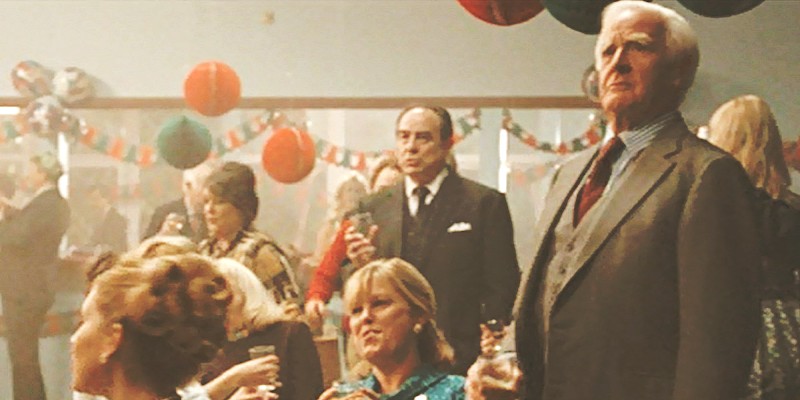 It's just like your old office holiday parties except everyone's a spy, everyone's cheating, and a new world order is at stake.

Let me just begin this appreciation by stating fervently and for the record that I consider Tinker, Tailor, Soldier, Spy (2011), the film adaptation of John le Carré’s 1974 novel starring Gary Oldman as George Smiley, to be the greatest spy movie ever made. A bold claim, I know, especially since relatively few people seem to have seen the movie, it’s generally overshadowed in cultural lore by the 1979 BBC miniseries with Alec Guinness as Smiley, and a quick scan of the filmography of the topmost people involved in production suggests that this movie may in fact have ruined a few careers. If I’m being entirely honest, I’ll admit the movie is all but inscrutable on first viewing. I’ve pushed it on enough people in my life to know that the most common reaction for a viewer who’s not intimately familiar with the source material is, more or less, “wait, what just happened?” That’s part of the movie’s brilliance, trust me. The molasses slow pacing, the absolute resistance to making anything explicit, the ever-shifting, trumpet-laced landscape of allegiances, identities, and betrayals, none of them explained—these are the stuff of movie magic. If you like that sort of thing. And by God, I do. Maybe you do, too.

I’ve been waiting for years to write about this movie. I really do consider it the best of its form. I’ll listen to arguments for The Spy Who Came in From the Cold (1965), another brilliant le Carré adaptation, and Army of Shadows (1969), Jean-Pierre Melville’s French Resistance epic, both composed, coherent masterpieces, but for me there’s just no surpassing the quiet, mixed-up desperation of Tinker, Tailor. Just about any time I’m in need of brooding, as we all are now and again, I’ll turn it on. (It helps that it’s consistently been on a major streaming service for years now.) I’ve seen it untold number of times and there’s a great deal I want to write on the subject, possibly backing up the outlandish claims I’ve been making so far, and someday I will, but right now, it’s Christmas, and I really just want to dive into the office Christmas party scene, which, like the movie itself, is an all-time great slice of movie-making.

First, though, let’s pause to note one prominent reason to celebrate this particular scene: it features John le Carré himself. One of the great novelist’s who ever lived and wrote, now departed. He’s billed simply as “Christmas party guest.” You’ll see him in the image above and find him in the second clip below, at the 0:40 mark, the first guest to rise, drink in hand, to join in singing the Soviet national anthem. If that doesn’t convince you of the profound, complex joys of this movie, I don’t know what will.

Tinker, Tailor is a film of vignettes. There are phases to it, and aficionados will recognize with alacrity, say, the Ricki Tarr sequence (a stunning movie within a movie set in Istanbul and featuring Tom Hardy as the possibly rogue agent chasing down rumors of a mole) or the Peter Guillam theft (an achingly tense spy procedural played out by Benedict Cumberbatch) and will likely have for one of them an affection that goes beyond the bounds of reason. It’s just a primitive reaction. I’m fairly partial to the Budapest sequence myself (Mark Strong as Jim Prideaux, warily eyeing sweaty waiters at a Hungarian cafe), but for sheer adaptive brilliance and in the spirit of rewarding multiple viewings, you can’t beat the office Christmas party. Can you ever, though? What better way to throw a disparate cast of characters together and bring out a few hidden secrets and possibly a mole eating MI-6 from within?

The office party sequence is actually composed of three scenes, each from a different moment of the Christmas party, brought to viewers in different acts of the film. (The film, I should mention is directed by Tomas Alfredson, written by Bridget O’Connor and Peter Straughan, and scored by Alberto Iglesias; kudos to all you. Please make another spy film together.) Each segment of the party has a provocative song pairing and that’s the best way to start breaking these gems down, so why don’t we have at it? From this point on, I’m going to be honest, unless you’re an ardent familiar of either the novel or the movie, there’s not going to be a lot for you to appreciate, and you might well want to stop here.

For the rest of us, down the rabbit hole…

Here we’re fairly early on in the party, notable because Control (John Hurt) takes it on himself to call Percy (Toby Jones), his would-be rival for the top job at MI-6, a “Calvinistic penny-pinching Scot” for not adding enough booze to the punch and having them all drunk already. Booze is added, Sammy Davis Jr.’s “The Second Best Secret Agent in the Whole Wide World” kicks in, and the office loosens its collective tie a little. First let’s just note the song choice. It perfectly captures the wry self-denigrating British-ness of the service, which in this period is simultaneously reconciling itself to its modest little brother role next to the American agencies, and also wrestling with the faded glory and glamor of its own institutional past.

Note also the tender moment between Smiley and his then un-estranged wife Anne, inter-spliced with their secret mirror relationship, Bill Haydon (Colin Firth) and Prideaux, engaging in their own quiet moment amidst the sudden clamor. There’s some just wonderful framing of figures here, and Haydon stalks the grounds in the most affably menacing way imaginable. While they all gamely sing along, none of the office’s staff can quite find the rhythm to sync up with Sammy Davis, Jr.’s boozy tongue-in-cheek swing. It’s just a perfect portrait of the British spy experience in the mid-Cold War era.

Part II
The State Anthem of the Soviet Union

The Calvinists have now been overcome and we’re clearly at a more advanced stage of the imbibing process, as Smiley makes idle chit-chat with a co-worker, viewed (at first inexplicably) from outside the room, through a window. That’s when the show-stopper comes on, the office Santa (I’m fairly sure that’s a drunk Roy Bland (Ciarán Hinds), aka Soldier), slovenly dressed, adorned with a Lenin mask, and demanding his music, the State Anthem of the Soviet Union. The idea that the MI-6 office Christmas party would engage in a group singalong of their primary’s enemy’s national song (might this have come from somebody’s memoir? or from le Carré?) is just wickedly stinging, a cunning little piece of evidence of the service’s deep cynicism, the cynicism that both makes them highly effective at analysis and agent recruitment (nobody recruits an agent like the British, ask anybody in intelligence—they’re rivaled only by the Cubans, no lie) and renders them vulnerable to would-be penetrating moles of the right class and ilk. (Smiley, to his own shame, captured that cynicism best, when he said to the man who would later become his chief antagonist, Karla: “We’re not so very different, you and I. We both spend our lives looking for weaknesses in one another’s systems. Don’t you think it’s time to recognize there is as little worth on your side as there is on mine?”) As the song builds to a crescendo, Smiley looks around the room for his wife, only to find her in a compromising embrace. A very compromising embrace, as we’ll discover later. This isn’t just Smiley finding himself the cuckold. It’s a master stroke in the mole’s campaign, a highly advanced form of psychological spy craft aimed squarely at Smiley and his particular vulnerabilities. Next time your spouse gets a little soused at your office party, judge him or her against this standard and its geopolitical ramifications, and ask whether the sin was really so grave.

And one final moment, not even a complete scene, just a look. That look is exchanged between Bill Haydon and Prideaux, two men locked in a profound and complex relationship that serves as a stand-in for the worst betrayals of the Cold War spygame, when love and comradeship and shared history were weaknesses that could be used to gain some advantage big or small, and yet it didn’t mean none of that was real. We start with Firth’s Haydon, the Kim Philby figure in the midst of his deception, swanning tipsily, sentimentally around the room while Julio Iglesias’ quivering version of La Mer kicks in. Haydon locks in on his old pal, the one who’s soon headed to Budapest, the man Haydon will eventually betray (perhaps unwittingly) and allow to be tortured, a man who’s also his lover. What’s captured here is a simple moment, one played out a thousand office Christmas parties around the world, friends exchanging a glance deep into the evening, but here, with that decadent saccharine disco in the background, we see midcentury espionage in all its seedy, cynical glory. A moment at once full of honor and disgrace. A quiet moment of treachery and sentiment.

The minutes that follow in the clip above (after the party) are, in my opinion, a misstep, one of the few the film makes, playing out the conclusion of the Philby incident like a Tarantino revenge fantasy, rather than admitting what actually happened. Philby wasn’t shot and killed by one of his own while held in a pen somewhere in the British countryside; he shipped out to Moscow and lived out his days in a golden cage, receiving visitors well into his old-age. By all rights, Tinker Tailor‘s true ending is right there in the poisoned look between Haydon and Prideaux.

There you have it: the greatest office Christmas party ever filmed. Full of half-drunk plastic cups, decorative tissue paper, and spies. You could watch it a hundred times and notice something new every go around. A side character in a tellingly festive turtleneck or a whisper into somebody’s ear. This is spy craft, and spy fiction, at its most intimate. The world may be sordid and ugly but it’s one we want to spend time in. There’s an irresistible romance to all that deception. We keep coming back for it again and again, making the same mistakes, trapped in this long limbo of office Christmas parties we call life. 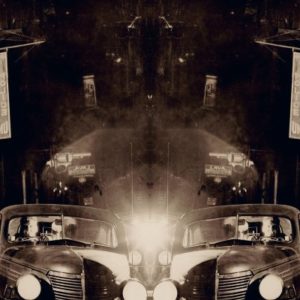 Throughout the long lurid history of the New York Police Department—the corruption scandals and serial offenders, manhunts...
© LitHub
Back to top