New Forms for the Most Extreme Human Experiences

The table has been set for true crime’s cultural moment for years. Producers of podcasts and docu-series can credit two major influences for honing non-fiction storytelling to its flashpoint. Errol Morris’s 1986 documentary The Thin Blue Line was notable for both its original use of re-enactments and the fact that he obtained the holy grail of exoneration for the film’s subject. In the 1990s, Ira Glass’s This American Life breathed new life into radio by developing layered audio stories from personal essays to political inquiries to investigative reports. Both innovators set the table by opening up perspective, and diving deeper into minor characters in ways that have allowed their storytelling descendants to leverage streaming platforms into new narrative modes.

In the wake of The Thin Blue Line re-enactments became the go-to tool of true crime storytellers when needing to break up talking head content, especially in the go-go news magazine era of the 1990s. The initial fever over This American Life was generated by the diversity of voices and the “alternative” stories they told. The deeper effect of these productions is felt in how they used story structure to expand perspective.

Re-watching The Thin Blue Line, it’s remarkable how Morris pushes the limits of POV by anchoring each character’s testimony in a seemingly repetitive re-enactment.  This American Life has remained an iconic show because there isn’t a story they can’t tackle. Through its familiar three-act structure, we have experienced trivial and tragic, profound and profane. This American Life is proof that there are no uninteresting stories. Our level of interest depends on the storyteller. Today’s true crime storytellers are taking the influence of perspective and structure into new realms.

The Thin Blue Line ran 110 minutes. This American Life is a magazine-style broadcast of 15-20 minute segments, with special editions covering a story through an entire broadcast. Those run-times are quaint for today’s audience, where a story is covered over eight, or more, one hour long episodes. What are today’s stories doing differently? And do these new forms elevate and achieve narrative possibilities that previous generations could only dream of?

Article continues after advertisement
What are today’s stories doing differently? And do these new forms elevate and achieve narrative possibilities that previous generations could only dream of?

“Storytelling has always been storytelling,” says Antonino D’Ambrosio, director of the documentary Frank Serpico, “It exists within the control of a dominant business model.” In the 1960s Frank Serpico exposed mass corruption within the NYPD, and his work resulted in the formation of the Knapp Commission. The documentary climaxes in a meeting between Serpico and his partner who backed him up on the day Serpico was shot in the face. Caesar, the fellow officer, failed to make the 10-13 “officer down” call.

Frank Serpico went into production in 2015, the year Serial debuted and exploded the podcasting universe. Music producer Brian Eno started the famous analogy about how only 30,000 people bought the first Velvet Underground record, but all 30,000 of them went on to start a band. Well, over 5 million people listened to Serial when it debuted in 2015, and if 2018’s trajectory is any indication all of them are currently working on a true crime podcast.

Undisclosed, a direct Serial offspring, debuted in 2015. It is hosted by three lawyers, including Rabia Chaudry (she was featured in Serial, is a lawyer, and has known Adnan Syed since she was thirteen). Undisclosed’s first season took a clinical lens to the Syed murder case, and openly pursued a post conviction relief judgement through the courts. In subsequent seasons Chaudry along with Collin Miller and Susan Simpsons have branched out to other cases. For the uninitiated, a typical Undisclosed narrative unfolds like an “Innocence Project” case in progress. The hosts take turns reading through case files in a clinical, yet engaging, fashion.

“Lawyers have to be storytellers,” Susan Simpson said when asked if she had done anything like podcasting before. Simpson started a legal blog about Syed’s case during the initial Serial run. Her posts were frequently referenced by Reddit users, which led Chaudry to her.

“In many ways, true crime has an undeserved reputation,” Simpson said when we talked about the how many of these stories were predominantly by TV news magazines like Dateline or Nancy Grace. Production values were low and the tone of coverage was sensational. On the wide use of re-enactments, Simpson added, “There isn’t a visual for a lot of the audio out there,” which makes podcasts a natural medium for the interrogation tapes, courtroom audio, 911 calls, newsreel footage, and reading of case files.

True crime has outgrown the news magazines in favor of in-depth episodic storytelling. In thinking about whether the stories themselves have changed, it’s important to note the goals haven’t. First and foremost, podcasts, like documentaries, strive to put us in the room, and to explore the context of a murder. True crime audiences need to go deeper than the motives and the method. We’ve seen that summary level story on Dateline for the past twenty-five years.

Storytellers are motivated not only by potential remuneration via the dominant business model. The expanded form allows them to be active participants in the story. The Thin Blue Line, and 1996’s Paradise Lost, led to the release of their subjects in the years after the films premiere. The Jinx teased a tacit confession during director Andrew Jarecki’s final interview with Robert Durst. After four episodes, the Undisclosed team stopped production on a Philadelphia case after a judge ruled in favor of a wrongly convicted man. Undisclosed also achieved their goal, just last month, of obtaining a new trial for Syed. And 2017’s Up & Vanished achieved breakthroughs and eventually solved the murder of a long running Georgia cold case.

“Our first responsibility is to the victim,” says Nic from the Ohio-based podcast True Crime Garage, which like Undisclosed serves an exculpatory purpose (intended to free the wrongfully convicted or overturn a case due to new evidence or misconduct).

Beyond the expanded form, what is the allure for true crime’s dedicated audience? “True crime is humanity at its extreme,” D’Ambrosio says, “People want to know what they would do in that situation.”

“There’s a little bit of detective in everyone,” Nic from True Crime Garage adds, “We all want to know why.”

As Antonino D’Ambrosio sees it, “Artists have always try to render the fallibility of human nature, and [with podcasting] we can mine these stories in a more literary and meditative fashion.”

We the audience are drawn by our curiosity and voyeurism to extreme stories.  But we also know that the crimes are often just the hook. The crime gets our attention, but the reason we listen to ten hours of storytelling is the human experience.

The crime gets our attention, but the reason we listen to ten hours of storytelling is the human experience.

Jeff Malmberg’s Marwencol (2010) tells the story of Marc Hogancamp, who woke up from a coma having lost his memory, and found solace in designing and photographing a miniaturized town inhabited by GI Joe figures in the throes of war.

Brian Reed, a This American Life alum, created S-Town (2017) after John B. McLemore brought him to Woodstock, Alabama to investigate a suspected murder. The story is ultimately about McLemore himself, and the fantastical world he created despite being surrounded by, as he calls it, Shittown.

Both Hogancamp and McLemore are autodidacts who excel at an artform. S*Town’s McLemore is a self-taught, world-renowned antique clock repairer. Marwencol’s Hogancamp is an equally accomplished photographer.

Each story’s title alludes to the fact that both men have built worlds to escape from the hostile environment around them. McLemore’s family property—with fantastical shrub maze, smelting shed, and cult like tattooing rituals—is in direct opposition to the oppressed community—“Shittown”—that McLemore derides for much of the story. Marwencol, the film, is named for the town Hogancamp created, and that we the viewer inhabit for much of the film.

As the audience digs deeper into the characters, we feel as though we are seeing their psyche writ large. Crime, buried treasure, isolation, morality, the human spirit’s response to oppression are elemental to both stories.

Marwencol’s runtime is ninety-six minutes, while S*Town is an eight episode, 350 minute podcast.

Marwencol is “not really about a crime at all,” says Jeff Malmberg, Marwencol’s director. Asked about expanding the story, Malmberg replies, “I could easily have done four hours,” but ten hours would’ve been unlikely given the unique creative vision of his subject.

The constraints of a ninety-six minute story forced Malmberg, like any good director, to choose the right visual moments to tell the story. The story progresses as we travel deeper into Hogancamp’s world and personality. Our perspective through the camera is tight, and helps us see and feel—even highly personal revelations—in alignment with Hogancamp’s viewpoint.

Alternately, McLemore’s mind is rambling and expansive. S*Town’s structure can’t help but follow, and in addition to McLemore we are treated to the lives of others, like a local never do well, Tyler who helps McLemore around his property. Interestingly, Reed uses smaller crimes as reason to branch off and cover their lives.

Marwencol’s power derives from the limited, tight perspective of experiencing Hogancamp’s self-discovery along with him, while S*Town immerses us in the world around McLemore, touching on the complexities of the labor market, finances, education and family dynamics. Both mediums allow for this type of storytelling. We’re immersed in S*Town, and can have a sense of the people in that community. In Marwencol we’re immersed in one perspective. Both are powerful and worthy of our attention.

A storyteller can craft a story that resonates regardless of length. We’re not seeing a new, unexplored, type of story. In episodic stories, we’re getting an expanded dive into multiple characters.

“I feel like documentaries are a lecture,” Undisclosed’s Susan Simpson says, “You get one person talking and telling you how it is.”

Marwencol’s Jeff Malmberg counters, “When I’m doing a podcast, I’m a part of the story. In Marwencol I wanted to back away and have the audience experience it directly. But with podcasting I need to first interview myself, before I can begin telling the story.”

These counterpoints simply show a preference for each medium’s point of view.

S*Town isn’t deeper or more contemplative than Marwencol. A storyteller can craft a story that resonates regardless of length. We’re not seeing a new, unexplored, type of story. In episodic stories, we’re getting an expanded dive into multiple characters. And every time you let a new character into the narrative they bring a world that enhances and expands on the storyteller’s themes.

With true crime, not only are we experiencing humanity at its extreme, storytellers are pushing narratives as far as technology, and our tolerance as an audience, will allow.

Gregory Rossi's writing has appeared in The Missouri Review, Interview, Publishers Weekly, and The Brooklyn Rail among others. He has hosted a reading series, produced and directed a feature length documentary, and is currently working on his second novel; his first, The Come Up, is available at www.gregorywrossi.com.

The Crime Reader's Guide to
Growing Up Gay in the South 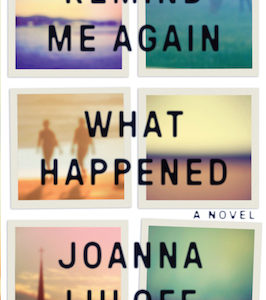 The last photo the nurse found on my camera was of an ice cream vendor on a stone street in Mysore. Now that I’m home again,...
© LitHub
Back to top