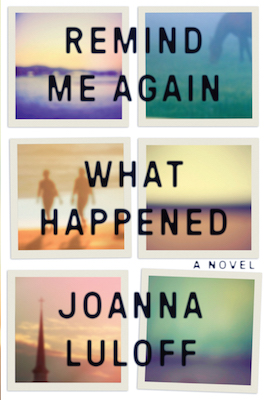 The following is an exclusive excerpt from Remind Me Again What Happened, by Joanna Luloff. In the following passage, a woman wakes up in the hospital after a long illness, and doubts her husband has told her everything about how she got there.

The last photo the nurse found on my camera was of an ice cream vendor on a stone street in Mysore. Now that I’m home again, Charlie has printed it out for me. I’ve placed it in my “Past Life: Work” folder. Charlie hates the way I label my absent memories, but the system has been helping me. All those weeks ago in the hospital, the doctor told me that this photograph helped his staff come up with my diagnosis. Before all of this doctor’s sleuthing work, before my induced coma, before all my bumps and bruises, I had been in a hotel overlooking the sea. I had asked the concierge to bring me some tea and Tylenol. I was too tired to move and I felt like I was coming down with a fever, or that’s what I’m told I said to the stranger at the other end of the phone line. When the young man from room service came to the door, however, I didn’t answer. Instead he heard a lamp break, so he found a maid and together they entered the room with her key. They reported they found me thrashing on the floor. An ambulance was summoned and brought me to the hospital. I don’t remember any of this. It remains a blank space in my memory. The hotel staff, the nurses, and Charlie, my ever-dutiful husband, have helped fill in the gaps.

It was only when, days later, Charlie sat by my bedside, showing me the most recent images on my camera, trying to trigger my memory, that the doctor peered over Charlie’s shoulder. “How long were you in India?” he asked.

“Close to six months,” Charlie answered for me.

I needed my best friend, and I wanted an ally. It’s funny what stays and what goes in a malfunctioning brain. I still had—have—my instincts.

“We may have found the culprit.” The doctor smiled eagerly, and I suppose we were meant to take this as good news, though I’m sure neither of us felt like celebrating. The doctor patted Charlie’s back in congratulations, for us or for him, it was all the same. Two men congratulating one another for their fine detective work. I have to imagine most of this scene, filling out the scribbled notes I’ve written in my notebook. It would still be a few more days before Rachel arrived. I had asked Charlie to call her. I needed my best friend, and I wanted an ally. It’s funny what stays and what goes in a malfunctioning brain. I still had—have—my instincts.

A mosquito bite. A simple nibble, one of hundreds that had poked at my skin, but this one came with a virus. Japanese encephalitis, the doctor explained, as if the news were a gift. I was lucky I was not dead. I was unlucky that I was part of the 30 percent whose natural immunities couldn’t shrug off the worst manifestations of the virus. High fever, seizures, damage to the central nervous system. This is why Charlie often answers questions for me and tells me what did and did not happen. Just as he helped me put together the fragments of those first memories in the hospital and the details of the days that followed, he continues to do this now, many months later. There is a smudge where my memories are supposed to be.

Since there were no other witnesses, here is my version of waking up in the hospital, and you will have to take my word for it.

I woke up in a buzzing room and Charlie wasn’t there. I still blame him for that. I think it would have helped to see him straightaway. And I wonder, if he had been with me beforehand, in the hotel room, if he hadn’t been delayed, would he have seen the signs of my fever sooner, would he have gotten me to the hospital when there was more they could have done? Before the fever spiked. Before the seizures began.

I woke up in a buzzing room and Charlie wasn’t there. I still blame him for that.

Instead of Charlie, the first thing I saw in that dank, unpleasant room was the shadows of a fan cast on moldy walls. Everything else was awash in blankness. It was humid. Too humid for a hospital, I thought. And then I began to remember that I was far from home. But perhaps remember isn’t quite the right word. I sensed that I had chosen to go away for a while, back to an old, familiar place. The heat was familiar. Charlie was supposed to meet me here, but he hadn’t yet. Later I’d find a crumpled note in my bag that proved it. Written in the concierge’s hand and framed with the Lighthouse Hotel border: So sorry. Something came up. May be quite delayed. Will call soon. No name, but I assumed from Charlie. The tone certainly carried his abrupt politeness. There are many things I still remember.

And so I lay there in an unfamiliar bed, the sheets kicked down around my ankles, waiting for someone to arrive who would tell me where I was, what was wrong with me, when I could go home. I had a headache behind my eyes that reminded me of the migraines I have suffered ever since I was a little girl. And there was something plastic attached to my neck that sucked and pulled at my skin. My neck, in fact, was breathing instead of my mouth. I can’t begin to explain the panic I felt. Nor the sense that every time I approached something like a memory, it got blotted out by a sudden shadow. It’s the same kind of sensation that comes after you stare at the sun too long, and then as you look away, a trailing splotch of undefined color interrupts your vision. You can sense the many things that surround what you are looking at, but the closer you get to the thing itself, the blinder you become.

I tried to remember. Outside this hospital room, I thought, there is a city that leads to the sea. There is a hotel by the water, with lounge chairs sagging with heavy cotton cushions in shades of dark orange and blue. I can feel myself lying on one of those chairs, my fingers drawing shapes in the sand. I am waiting for something or someone, but before I can remember who, the sun begins to blind me again and a doctor walks in and knocks his clipboard against the metal frame of my bed. He has my attention. He is small and wears a neat mustache. His skin is dark against the blue-white of his doctor’s coat. “Mrs. Scott? How are you feeling?”

“My name is Claire,” I answer. “Please call me Claire.”

From Remind Me Again What Happened. Used with the permission of the publisher, Algonquin Books. Copyright © 2018 by Joanna Luloff. 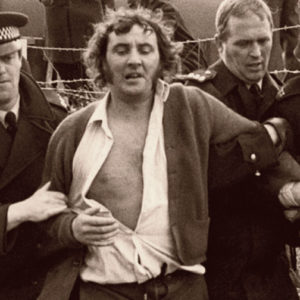 Crime and the City: Manchester For my money there isn’t a better contemporary crime writer in England at the moment than Joseph Knox. And Knox writes...
© LitHub
Back to top