The new series, which is about journalists, police, and yakuza circling one another in milennium-era Japan, is invested in the long history, and fading future, of such a triangle.

It’s been raining for three days straight by the time I find a moment to sit down and watch my screeners of Tokyo Vice, HBO Max’s new series, a fish-out-of-water newsroom-noir set in 1999 Japan. A dark, rainy evening is the perfect backdrop to take in the show, whose inaugural episode (directed by Michael Mann) takes place across numerous dark, rainy evenings. In this way, the series might seem to resemble every other movie set in Tokyo: shadowy and rain-slicked streets, glowing neon signs, dim karaoke lounges, billboards merging ukiyo-e aesthetics with pop art. It looks a little like Blade Runner, a little like Lost in Translation. But it clearly tries to move past such reductive fetishizations of Japan, even when it slings a narrative that falls back on cliches.

The series is based on the true-crime memoir Tokyo Vice: An American Reporter on the Police Beat in Japan by Jake Adelstein, an American from the Midwest who moved to Japan at 19 and ended up attaining a coveted position as a crime reporter for the The Yomiuri Shimbun, one of Tokyo’s largest newspapers. As such, the series follows Jake (Ansel Elgort), a plucky and confident young journalist reverent of and deferential to Japanese culture except when his superiors at the newspaper demand that he conform to industrial protocol he thinks is wrong. He begins his own sneaky side-investigation into a connection between several murders that the newspaper does not want to treat as “murders,” eventually collaborating with grizzled, world-weary cop Hiroto Katagiri (Ken Watanabe, masterful as always).

The series, which is in equal measures about journalists, police, and yakuza circling one another, is invested in the long history, and gaunt future, of such a tale. And Tokyo Vice works hard at combining the gritty, gangstery pleasures of its main (more familiar) police-procedural-meets-yakuza-crime-ring storyline with other, less-obvious, less-obsessive threads. Much of the series (the first three episodes of which have been released) is about the goings-on of the newspaper where Jake (the first Westerner to join the staff) works; focusing on his attempts at being accepted alongside his desire to follow his instincts, an impulse which renders him arrogant and even more of an outsider to those around him.

Elgort, who delivers most of his lines in Japanese, makes for a character with a believable desire to be accepted in this place which is not his homeland; Jake is not the lost tourist of Lost in Translation, but a very green Carl Bernstein or Bob Woodward who has fallen in love with a place he seems to know he has no claim to. Although the first scene of the first episode is a high-stakes sting, Jake is truly introduced to us in the subsequent scene, when he merely lives his life: he takes the Tokyo metro, buys food at a local supermarket, interacts with everyday people in the English-language class he teaches during the day, studies hard for the exam he’ll need to qualify as a journalist.

The series’s emphasis on the newsroom dwells for a while on the prejudice Jake (not only as an American, but as a Jewish American) experiences as a newcomer without fleshing it out in an especially meaningful way. The camerawork does everything it can to show how he sticks out like a sore thumb, literalizing it; Elgort is very tall, and there are shots of the crowds that cut off his head and then slowly pan upward to find his face. But the fruitful, often funny workplace dynamic is the one of the show’s smartest elements, especially when it builds the complicated relationship he has with his superior editor, one of the newspaper’s only visible women, Eini (played to solemnity by the great Rinko Kikuchi).

Still, the show crackles when it fully gives way to noir, interweaving the story of Jake and Hiroto with two more wayward souls: Sato, a young yakuza-with-a heart (the wonderful Shô Kasamatsu), and Samantha (Rachel Keller), a fellow American working as a hostess in an expensive club who seems to be guarding some mysterious secrets.

I’m less interested in Samantha’s lost-but-tough-girl characterization, just as much as I’m not interested in any Westerner “finding themselves” while traveling through Japan. But Tokyo Vice is a deep dive into an old-school archetype: the “Yakuza,” the kind of gangster who used to be a stock villain in these sort of enterprises, but is no more. This is a fading character (in fiction, and, by accounts, in life), which is partially why Tokyo Vice keeps itself attached to Adelstein’s own millennium-era timeline. This way, it becomes an effective period piece, a rumination on a specific moment—in Tokyo, in cinema’s dreams of Tokyo—before it dims away to nothing. 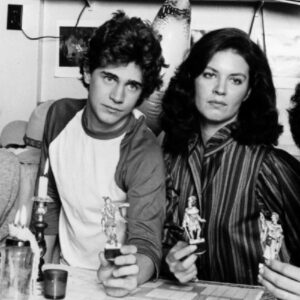 When Satan finally returned, old Beelzebub came in the form of a smiley-faced, spray-painted figure on the wall of a small...
© LitHub
Back to top